The “Hold My Beer” Helicopter Accident

“Hold My Beer” is label applied on-line to video footage of many dangerous and/or ill-advised stunts, where the impending embarrassing and often painful failure is usually glaringly obvious before the end of the video.

The US National Transportation Safety Board (NTSB) has reported on a helicopter accident that had a fatal alcohol fuelled ending. 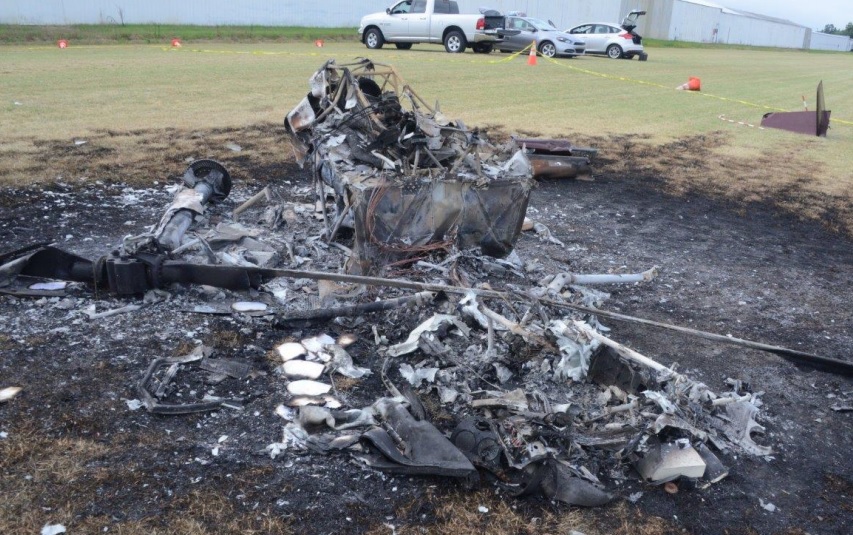 On 12 June 2016 Robinson Helicopter Company (RHC) R44 II Raven N789MR impacted the ground during takeoff from the Classic Airstrip, near Jonesboro, Arkansas on a personal flight. The sole occupant, a 73 year old commercial licensed pilot, was fatally injured. The helicopter was destroyed by the impact and post-crash fire.

A witness…reported that before noon, he saw the accident pilot drinking from a red cup that smelled like alcohol. The pilot refilled the cup 2 or 3 times during the next 2 or 3 hours.

When the witness finished working on a task, he heard the pilot say that he was going to put on an airshow.

The witness did say that ” I thought he was kidding “.  However subsequently from a distance:

The witness observed the helicopter lift off at a 45° angle backward and upward. The helicopter rose to about 125 ft and then descended out of sight behind hangars… The witness reported that he thought he “heard it hit”…  The helicopter began to rise upwards above the hangars and it began to spin around. It appeared that the tail rotor was not working and the skids were bent as if it had hit the ground.

The helicopter continued to rise to about the same height as when it lifted off. The helicopter then descended again, impacted terrain, and burst into flames in the middle of the west airstrip. The witness stated that another witness nearby called 911 and they waited for first responders to arrive.

It should be no surprise to readers that:

Ethanol is the intoxicant commonly found in beer, wine, and liquor. It acts as a central nervous system (CNS) depressant. After ingestion, at low doses, it impairs judgment, psychomotor functioning, and vigilance… The effects of ethanol on aviators are generally well understood; it significantly impairs pilots’ performance, even at very low levels.

Federal Aviation Regulations prohibit any person from acting or attempting to act as a crewmember of a civil aircraft while having 0.040 gm/dl (40 mg/dl) or more ethanol in the blood.

While ethanol can be produced in the body after death by microbial activity, the results indicate the pilot is likely to have been well over the regulatory limit.

Diphenhydramine, a sedating antihistamine used to treat allergy symptoms and as a sleep aid, was also detected plus two other drugs that are considered ‘non-imparing’.

The pilot’s failure to maintain helicopter control during takeoff.

Contributing to the accident was the pilot’s impairment due to his combined use of alcohol and diphenhydramine, which led to his improper decision to fly after drinking alcohol and degraded his ability to maintain control of the helicopter.

The (unsurprising) safety message is that mixing alcohol and sedatives with flying can be rapidly terminal.

The other safety message is that you might one day see the precursor to an accident, which if you recognise, would mean you have the opportunity to intervene and save a life.

Although it appears the impact was not survivable, it is worth noting that Robinson issued R44 Service Bulletin (SB)-78B on 20 December 2010 (revised 28 September 2012). The SB started:

TO: R44 and R44 II owners, operators, and maintenance personnel
SUBJECT: Bladder Fuel Tank Retrofit
ROTORCRAFT AFFECTED: R44 helicopters S/N 0001 thru 2064, and R44 II helicopters S/N 10001 thru 12890, unless previously accomplished.
TIME OF COMPLIANCE: As soon as practical, but no later than 30 April 2013.
BACKGROUND: This bulletin requires R44 helicopters with all-aluminum fuel tanks to be retrofitted with bladder-type tanks. In addition to a factory retrofit program, a field kit is now available. To improve the R44 fuel system’s resistance to a post-accident fuel leak, this retrofit must be performed as soon as possible.

This SB was not made mandatory by an FAA Airworthiness Directive.  This accident helicopter did not have the tanks fitted according to its records.

Germanwings: Psychiatry, Suicide and Safety  The BEA report sheds light on the complexities of addressing pilot mental health issues. We look at the lessons.