Enron and the Hubris of the “World’s Leading Energy Company”

Though dwarfed by the 2008 global financial crisis, in January 2006 the trial was getting under way of the key executives behind the November 2001 bankruptcy of Houston based energy company, Enron.

Enron was originally a relatively pedestrian regional natural gas pipeline company, formed by the merger of Houston Natural Gas and InterNorth in 1985. It transformed itself into from an infrastructure operator to primarily an energy trading company, exploiting the deregulation of the energy sector.

Many were taken in.  Enron was voted “America’s most innovative company” in Fortune magazine’s annual poll from 1996 to 2001, the year the company imploded.  This was after it emerged that huge debts had been concealed, giving investors a false image of the company.  As The Guardian notes:

Enron went from being a company claiming assets worth almost £62bn to declaring bankruptcy within a period of three months. Share prices collapsed from about $95 to $1.

The company used ‘mark-to-market accounting’ to hide their losses:

This is a technique used when trading securities where you measure the value of a security based on its current market value, instead of its book value. This can work well for securities, but it can be disastrous for other businesses.

The mark-to-market practice led to schemes that were designed to hide the losses and make the company appear to be more profitable than it really was.

The SPVs involved dubious partnerships run by their own CFO.  This was all signed off by accountants Arthur Anderson, who voluntarily surrendered its licenses to practice as Certified Public Accountants in the US in 2002 as the scandal developed.

Enron’s collapse led to new rules on the financial reporting. In July of 2002, President George W. Bush signed into law the Sarbanes-Oxley Act. The Act heightened the consequences for destroying, altering or fabricating financial records, and for trying to defraud shareholders.

Perhaps its therefore a surprise that Enron had an extensive Code of Ethics! 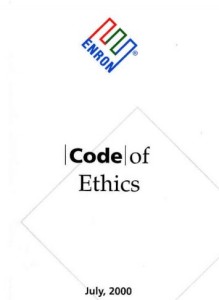 Enron’s July 2000, 62 page  Code of Ethics opens with with a letter from Enron founder and former Chairman Kenneth Lay, who assured employees that he conducts business “in accordance with all applicable laws and in a moral and honest manner.”  Lay was convicted after the scandal but died before sentencing.

In the Code the company states:

We treat others as we would like to be treated ourselves. Ruthlessness, callousness and arrogance don’t belong here.

Bethany McLean, a reporter who identified before the collapse that all was not what it seemed at Enron, described Enron as having a ‘culture of arrogance’ and cited their large lobby banner ‘Enron: The world’s leading company’ (which replaced the ‘The world’s leading energy company’ slogan just prior to the collapse, almost as hyperbole had to be increased as the cover-up grew bigger).  In one interview before the collapse with CEO Jeff Skilling:

Skilling even suggested in a 1999 interview that the company could be managed ‘loosely” to foster innovation because of their ‘tight’ internal controls.  The same article suggested Skilling was pressing employees to “find new ways to take advantage of the turmoil” unleashed by impending energy market deregulation.  Enron is now known to have deliberately created real and imaginary power shortages during the 2000–2001 California energy crisis, in order drive up prices in the state’s newly deregulated energy market.

Enron said in their Code of Ethics:

Yet the SPVs were an explicit example of hiding information to prevent investors ‘moving’ their investments i.e. dumping stock.

The Enron Code of Ethics smacks of classic ‘shelfware’: intended for outsiders than for actual implementation.  Certainly poor leadership and contrary executive behaviour will have undermined the code, including the section (p60) on ‘reporting’ (one person did report the SPVs scheme, as per the Code to the Office of the Chairman, but only on the day in July 20001 when the CEO resigned, their claims were not fully investigated).  McLean wrote:

Because Enron believed it was leading a revolution, it encouraged flouting the rules. There was constant gossip that this rule breaking extended to executives’ personal lives–rumors of sexual high jinks in the executive ranks ran rampant.

Many of these rumours proved to be true.  The Economist even wrote in 2005:

It is only a slight exaggeration to say that office romance got a bad name, like so many things, from Enron, where loads of intra-office sex came with the territory for its masters of the universe.

Whereas the Code of Ethics said briefly:

Another section of the Enron Code of Ethics banned of company “officers, directors and employees” from trading in Enron shares despite the fact it was widespread.

The code, perhaps by its nature, emphasises individual’s legal compliance responsibility but often in a rather vague and general sense, as seen in the single paragraph on safety focused on “employees” (with no mention of “officers and directors”): 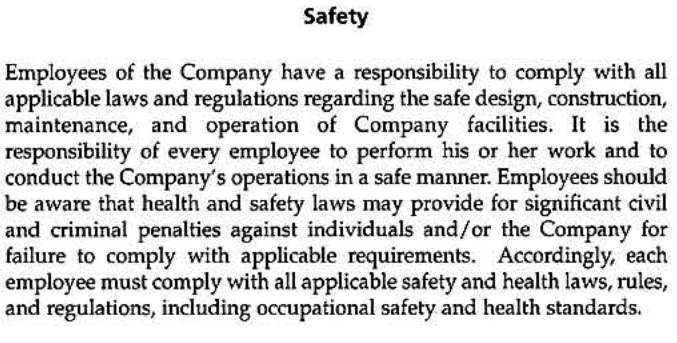 The text on IT passwords is longer!  No reference is made to any specific Enron safety procedures or standards.

Three employees died in an explosion at their powerplant in Teeside, UK on 8 August 2001 after a transformer exploded.  A few days later Ken Lay, after saying ‘”they still haven’t…figured out what caused it”, Lay then speculated it could have been due “human error” and an experienced employee “maybe not understanding a certain manual”

In that video Lay also admits that a fatality in India on a wind energy project had not been reported to senior executives for some time.  But again he was confident in describing that as “human error” (even though errors are normally symptoms of deeper systemic or organisational issues not causes).  He then emphasised that at Enron “Safety has to be number one” and “abiding by safety precautions” that “we preach all the time”.

As is sometimes common, Enron expected all employees to sign a statement committing to abiding by the code.  This approach is often a neat way to penalise low level employees in disciplinary cases but was certainly not applied in Enron against executive actions.

The code did make a prescient warning:

Many experts have concluded that if companies like Enron do not take active steps to adopt preventive policies and procedures covering securities trades by company personnel, the consequences could be severe.

We would however argue that ‘active steps’ need to be more than simply creating shelfware policies and procedures.

The punchline though is that Enron, for all its flaws and pathological behaviour never had the hubris to actually claim they were the “World’s Leading Energy Company”.  As the Code of Ethics shows, that was simply their vision.

Which should make you think about companies that do make similar claims!

The kumara (sweet potato) does not need to say how sweet it is.

The spectacular implosion of Enron has been covered in many books (as well as countless theses, papers and articles):

We have previously discussed corporate governance in: The Contrarian Director

UPDATE 1 March 2018: How Leaders and Their Teams Can Stop Executive Hubris: Building a culture of critical thinking and humility can spare companies from the ravages of excessive CEO confidence.

UPDATE 17 June 2018:  The Psychologist Guide to… Leadership  Ten tips including 10. Be aware of your own power

Our every word, action, even a stern glance – incidental or otherwise – has greater consequence. Giant’s whispers are shouts, their outbursts are explosions. Being a leader means never forgetting this.

UPDATE 31 August 2018: Skilling is released from prison to a ‘halfway house’.