The US National Transportation Safety Board (NTSB) report on confusion over the applicable engine Instructions for Continued Airworthiness (ICA) and ditching procedures in a fatal 2013 accident in Hawaii.

Cessna 208B Caravan N687MA, operated by Makani Kai Air, ditched off off Hawaii on 11 December 2013, after a sudden power loss.  One passenger died in this accident (State Health Director Loretta Fuddy) and three people were seriously injured.  As we reported previously, the accident and egress were filmed by passenger (Ferdinand Puentes).

In a written statement, the pilot reported that shortly after takeoff from runway 05, at an altitude of about 400 feet above ground level (agl), he began a left turn for a downwind departure. Shortly after passing 500 feet agl, the pilot motioned toward the power lever to reduce power for the climb when he heard a loud “bang” followed by an immediate loss of engine power. The pilot continued the turn toward land, verified the fuel valves were on, and observed all engine gauges displaying “zero.” The pilot realized the airplane was not going to make it to land, and rolled the wings level while broadcasting a mayday distress call. Shortly after, the airplane landed within open ocean water in a flat or slightly nose up attitude.

All the passengers and the pilot exited the airplane through the rear right door, and the airplane remained on the water surface for approximately 25 minutes before it sank. One passenger swam to shore, and United States Coast Guard and Maui Fire and Rescue helicopters recovered the pilot and 7 passengers from the water about 80 minutes after the ditching. 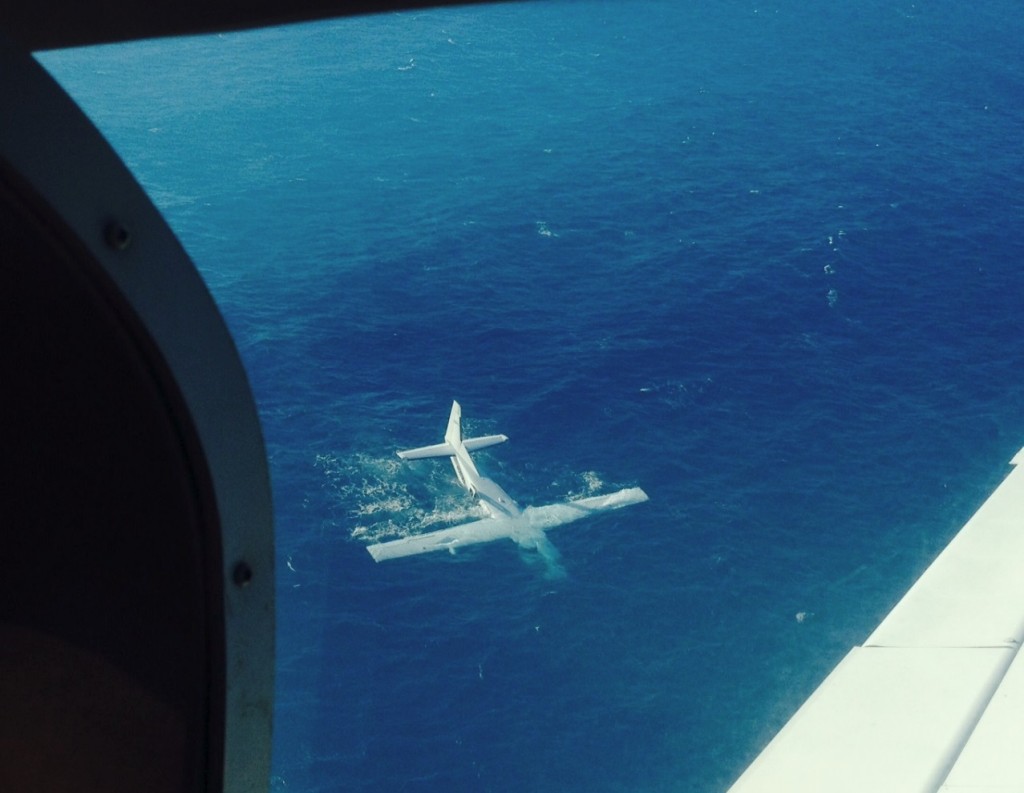 UPDATE 28 March 2019: A bizarre conspiracy theory that a frogman could be seen alongside the still alive Fuddy at 2m21s has been debunked in an equally bizarre video.

After the aircraft sank but before it was recovered the wave action caused the aircraft to repeatedly contact the ocean floor. During that time the cabin was substantially damaged… 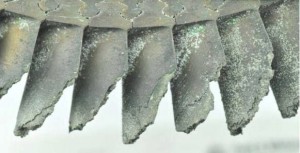 Impact marks were found on the CT shroud consistent with the liberation of one or more of the CT blades. The NTSB believe the thermal damage, which precluded conclusive determination of the cause of the blades failures, was secondary and due to the engine fuel control unit increasing the fuel flow in response to the sudden loss of compressor speed when the blades failed. 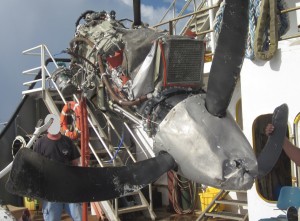 The NTSB say that about 18 months before the accident:

…the engine had reached its manufacturer-recommended time between overhaul (TBO) of 3,600 hours; however, the operator obtained a factory-authorized, 200-hour TBO increase.

Subsequently, at an engine total time since new of 3,752.3 hours, the engine was placed under the Maintenance on Reliable Engines (MORE) [Company] Supplemental Type Certificate (STC) inspection program, which allowed an immediate increase in…TBO from 3,600 to 8,000 hours.

The MORE STC inspection program documents stated that the MORE STC was meant to supplement, not replace, the engine manufacturer’s Instructions for Continued Airworthiness and its maintenance program.

The review of the airframe and engine maintenance logbooks revealed no evidence that a compressor turbine metallurgical evaluation of two blades had been conducted.

The operator reported that the combined guidance documentation was confusing, and, as a result, the operator did not think that the compressor turbine blade evaluation was necessary. It is likely that, if the SB had been complied with or specifically required as part of the MORE STC inspection program, possible metal creep or abnormalities in the turbine compressor blades might have been discovered and the accident prevented.

The engine issues are discussed in the Powerplant Group report.

The airline owner has publicly disputed that:

“If it didn’t happen, then all these people did exactly as they were trained and instructed to do, so I’m not sure as to how you would want to interpret that,” he said.

“You believe [the pilot] gave the pre-flight briefing?” KHON2 asked.

The airplane was configured with two flight crew seats and nine passenger seats.

The pilot reported that he hit his head on the instrument panel during the water impact, and was “bleeding badly” as a result. He unstrapped his harness, yelled at the passengers to get out, and started to grab seat cushions to use as floatation devices. He looked for life vests, saw one, and gave it to a passenger who said his wife did not have one. He did not take time to look for his own life vest as the airplane was filling with water. After checking to see that the cabin was empty, he exited through the door at the rear of the cabin. He told the passengers to swim away from the airplane because he was concerned that it would sink rapidly and drag them down. The current and waves, which he estimated to be 6 to 8 feet high, gradually separated the group. The pilot’s reported weight was 240 pounds. 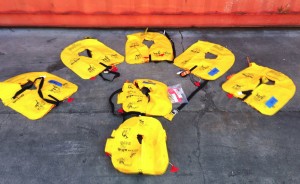 Life Jackets (PLDs) – the Two in the Foreground are the Infant’s Jackets (Credit: NTSB)

The infant life vest used by the fatally injured passenger [3] reportedly meets FAA TSO-C13d requirements. Those requirements list a minimum buoyant force in fresh water at 70°F of 20 pounds for a wearer weighing less than 35 pounds.

Passenger 4, who was traveling with passenger 3, reported that the pilot did not give a safety briefing before takeoff. He said that after the airplane impacted the water, he saw other passengers with life vests, and asked where they were located. Someone told him they were in the seat pockets, and he found one, put it on, and went to the back of the airplane. Passenger 4 further stated that he was at the rear door passing seat cushions out to passengers who were already in the water when passenger 3 came to the door; she was wearing a life vest, and she inflated the vest. They got into the water, and he inflated his life vest. Passenger 4 stayed with passenger 3 as they drifted away from the airplane. He noted that passenger 3 was “not really saying anything but was breathing very hard and fast.” Later, he noticed that passenger 3’s eyes were closed, and she was no longer breathing hard.

Passengers 5 and 6, a married couple, reported that the pilot assigned them seats, but did not provide a safety briefing prior to the flight. The pilot asked them how many of them had flown over that morning, and then said, “you know the procedures.” After the water impact, passenger 6 opened the door at the rear of the cabin, and immediately jumped into the water without a life vest. Passenger 5 jumped out behind him, and she also did not have a life vest. Someone was throwing life vests out of the airplane, and passenger 6 grabbed two of them. He inflated a life vest without putting it on, and held onto it. He assisted his wife (passenger 5) in putting on and inflating a life vest; she did not use the life vest’s waist strap. She reported that the life vest “pushed up around her head and was choking her.” The life vests worn by passengers 5 and 6 were examined, and determined to be adult life vests. Passenger 5’s reported weight was 210 pounds and passenger 6’s reported weight was 200 pounds.

Passenger 7 reported that everyone exited the airplane without difficulty. He recalled helping an older couple put on their life vests before they exited the airplane. He said that they were having difficulty opening the pouches that the vests were stored in so he opened the pouches for them, helped them put the vests on, and inflated one CO2 cartridge on each vest. After exiting the airplane, he swam to shore. He later found that he had inadvertently put on an infant life vest, which he said seemed “small or tight” although it “worked fine.” Passenger 7’s reported weight was 160 pounds.

Passenger 8 reported that it took a few minutes for everyone to exit the airplane and that he did not notice anyone having a problem. His video showed that he obtained a life vest from the seat pocket in front of his seat. Passenger 8’s reported weight was 160 pounds.

An autopsy of the fatally injured passenger was conducted by Pan Pacific Pathologists, LLC, of Wailuku, Hawaii, under the authority of the Maui Police Department. The findings listed in the autopsy report included “acute cardiac arrhythmia” and “no significant traumatic injuries.” The report noted that she was observed by another passenger “to be fearful and hyperventilating shortly before losing consciousness.” According to the autopsy report, her cause of death was “acute cardiac arrhythmia due to hyperventilation.”

Review of 14 CFR 135.117, briefing of passengers before flight, revealed that section A states in part “…Before each takeoff each pilot in command of an aircraft carrying passengers shall ensure that all passengers have been orally briefed on…Location and means for opening the passenger entry door and emergency exits…Location of survival equipment…If the flight involves extended overwater operation, ditching procedures and the use of required flotation equipment.”

If the pilot had provided a safety briefing, as required by Federal Aviation Administration regulations, to the passengers that included the ditching procedures and location and usage of floatation equipment, the passengers might have been able to find and use the correct size floatation device.

…none of the PFDs had reflectors on them…….the yellow color [of the PFDs] helped a great deal, but if it had been night, it would have been very difficult to locate individuals in the water.

The National Transportation Safety Board determines the probable cause(s) of this accident as follows:

The loss of engine power due to the fracture of multiple blades on the compressor turbine wheel, which resulted in a ditching. The reason for the blade failures could not be determined due to secondary thermal damage to the blades

No contributory factors are identified and there are no recommendations.

We have previously covered the ditching of Sikorsky S-76C 9M-STE of MHS Aviation in the South China Sea on 12 December 2014 which also featured a dramatic  passenger video of the ditching and rescue.

We have also written this article about another C208B engine failure in Hawaii: Micro FOD: Cessna 208B Grand Caravan Engine Failure & Forced Landing

We have also written these C208 articles:

Aerossurance is an Aberdeen based aviation consultancy, with extensive experience of aviation safety and survivability matters.  For aviation advice you can trust, contact us at: enquiries@aerossurance.com