Five people died when a business jet collided with what the NTSB originally stated was an un-charted 72 ft concrete powerline pole, built 0.25 miles from the departure end of the runway, during a nighttime go-around. The US National Transportation Safety Board (NTSB) have issued a factual update on this accident to Beechcraft Corporation 390 Premier (Premier 1A), N777VG, on 20 February 2013. The aircraft collided with the utility pole and crashed following a go around initiated after touch down at Thomson-McDuffie County Airport in Georgia. The crew of two were seriously injured and all five passengers, all employees of a surgical service company, were fatally injured.  Note: In mid 2015 the NTSB made revisions to their factual report after representations, including acknowledging that the pole was charted. 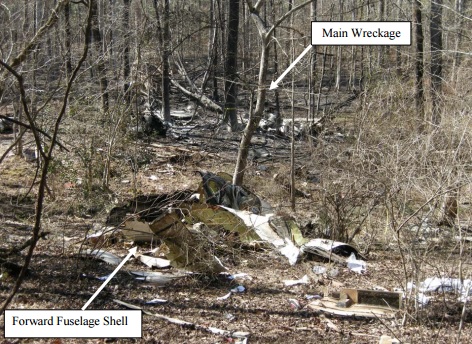 It is not clear why the go-around / touch-and-go was initiated.  The Commander has no recollection of the flight after turning on the landing light on approach.  The co-pilot did not recall anything unusual about the approach but commented that the “ANTI SKID FAIL” annunciator light illuminated before touch down.  After touch-down the co-pilot recalls the Commander announcing a go-around but did not know why, though concern about the anti-skid failure is a possibility. The NTSB report the co-pilot then:

…began to monitor the airspeed indicator, saw that they were at 105 knots approaching the end of the runway, and thought “it was going to be close.”

Although there was a co-pilot on board, the NTSB note that “both co-pilots who flew with the [Commander], including the accident co-pilot, stated that they did not have a specific role on the flights they flew with him…” perhaps because “his role in the cockpit is not required by federal regulations”, the Premier 1A being certified for single pilot operation.  So while there was benefit in having two crew, this potential was subverted because the aircraft was not apparently being flown in a true ‘multi crew concept’ with duties formally split between a ‘Pilot Flying and a ‘Pilot Monitoring’.

A training issue is identified in the NTSB report:

FlightSafety instructors and evaluators…stated that they discouraged students from executing a balked landing after touchdown.

…stated that the only balked landings he conducted in training were while airborne. When asked by investigators if he recalled anyone at FlightSafety telling him not to conduct a go-around or balked landing after touching down, the pilot said “no.”  and …did not remember ever doing a touch and-go in the simulator and had never done one in a Premier.

Beechcraft Premier IA manuals and FlightSafety training guidance for the Premier IA do not contain language prohibiting a balked landing procedure after touchdown.

The NTSB report that the aircraft stuck ‘Pole 48’:

Pole 48 was 72 ft high, and the airplane struck the pole about 58 ft agl. The pole was not equipped with lights, but orange visibility balls were on the adjacent wires.

The pole was owned and maintained by Georgia Power…. Pole 48 was erected in 1989, along with similar poles and electrical utility lines, to provide electrical power to the Milliken and Company textile plant adjacent to HQU [the airport].

Georgia Power did not notify the FAA before constructing the utility poles in 1989; However, as noted previously, the 2012 [Georgia Dept of Transportation] GDOT report did note that an obstruction existed 2,200 ft from runway 28’s displaced threshold, and aeronautical instrument charts for HQU, which were issued by the FAA, show an obstruction at the immediate end of runway 10.

Note: In mid 2015 the NTSB made minor revisions to their factual report after representations, including acknowledging that the pole had been spotted by GDOT prior to the accident.

Only after the accident, did Georgia Power apply for permission for locating four utility poles east of the airport, including Pole 48.

Regarding Pole 48, the FAA determined in its initial findings that “…the structure as described exceeds obstruction standards and/or would have an adverse physical or electromagnetic interference effect upon navigable airspace or air navigation facilities. Pending resolution of the issues described below, the structure is presumed to be a hazard to air navigation.” The study also stated that if the pole were lowered to a height of 46 ft or less it would not exceed obstruction standards…

FAA Flight Data Center issued several notices to airmen to alert pilots about obstructions and also to amend the approach and departure procedures at HQU accordingly.

WASHINGTON – The National Transportation Safety Board today determined that the pilot in a 2013 business airplane crash in Thomson, Georgia, failed to adhere to the airplane’s flight manual procedures for antiskid failure in flight and did not retract the lift dump — a critical system to assist in stopping the aircraft — immediately after making the decision to perform a go-around. Further, the pilot lacked adequate system knowledge for the airplane he was flying.

On February 20, 2013, at 8:06 p.m. (EST), a Beechcraft Corporation 390 Premier, returning from a business flight, touched down at Thomson-McDuffie County Airport. The aircraft did not slow as the pilot expected and, about seven seconds later, the pilot initiated a go-around. About nine more seconds passed before the aircraft collided with a utility pole about 1,835 feet from the departure end of the runway, 63 feet above the ground. Both the pilot and copilot sustained serious injuries and all five passengers were killed.

The NTSB noted that the pilot’s fatigue, due to acute sleep loss, and his ineffective use of time between flights to obtain sleep, contributed to the accident.

“This pilot’s inadequate knowledge of his aircraft was compounded by his fatigue,” said NTSB Acting Chairman Christopher A. Hart. “As a result, five people died who did not have to. Just as pilots should not take off without enough fuel, they should not operate an aircraft without enough rest.”

On approach to the airport, after the landing gear was lowered, the antiskid fail light illuminated. The copilot commented on the illumination; however, the pilot continued the approach without responding or taking any action.

Furthermore, the pilot did not refer to the available Federal Aviation Administration approved Abbreviated Pilot Checklist, which addresses antiskid failure and provides specific landing distance values. According to the checklist for an antiskid system failure, the flap configurations available for the pilot were flaps up or flaps 10. Either of these configurations would have required a longer landing distance than the runway at Thomson-McDuffie Country Airport provided. As a result, the pilot should have sought landing at an alternate airport.

The NTSB’s investigation revealed that data from the enhanced ground proximity warning system recorded that the aircraft was configured at flaps 30, which is prohibited by the antiskid failure procedures. At the time of impact, the flaps were transitioning through flaps 15. Additionally, while both the airplane’s flight manual and a placard in the cockpit warned against extending the lift dump in flight, the go-around was attempted with the lift dump deployed, making a safe climb unlikely.

The full report is available here.

UPDATE: In mid 2015 the NTSB made revisions to their factual report after representations, including acknowledging that the pole had been spotted by GDOT prior to the accident.

For advice you can trust on business aviation operations, aviation safety management, assurance and risk assessment, contact us at: enquiries@aerossurance.com