On 29 December 2016 Cessna 525C (Citation CJ4) N614SB of Maverick Air, was destroyed when it impacted Lake Erie shortly after a night takeoff from runway 24R at the Burke Lakefront Airport (BKL), Cleveland, Ohio. The pilot and five passengers died. 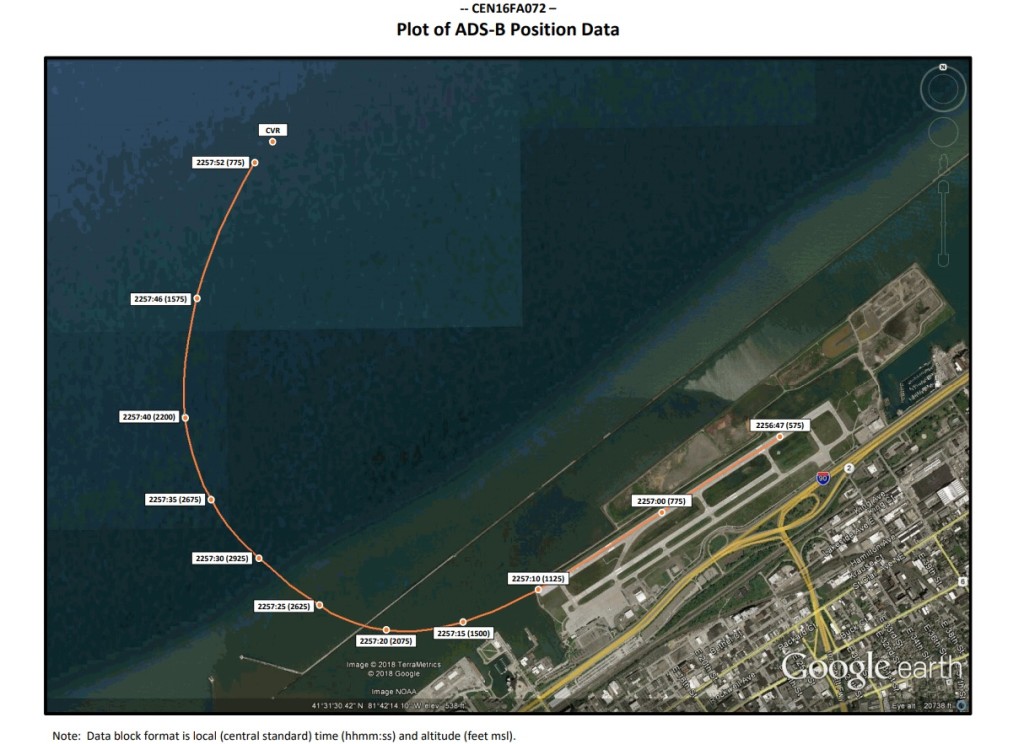 Plot of ADS-B Transponder Data from Cessna 525 N614SB from Take Off at Cleveland, OH to CFIT Impact in Lake Erie (Credit: NTSB)

According to the US National Transportation Board (NTSB), safety investigation report:

The airplane entered a right turn shortly after takeoff and proceeded out over a large lake. Dark night visual conditions prevailed at the airport; however, the airplane entered instrument conditions shortly after takeoff. The airplane climb rate exceeded 6,000 fpm during the initial climb and it subsequently continued through the assigned altitude of 2,000 ft mean sea level. The flight director provided alerts before the airplane reached the assigned altitude and again after it had passed through it. The bank angle increased to about 62 degrees and the pitch attitude decreased to about 15 degrees nose down, as the airplane continued through the assigned heading. The bank angle ultimately decreased to about 25 degrees. During the subsequent descent, the airspeed and descent rate reached about 300 knots and 6,000 fpm, respectively. The enhanced ground proximity warning system (EGPWS) provided both “bank angle” and “sink rate” alerts to the pilot, followed by seven “pull up” warnings. 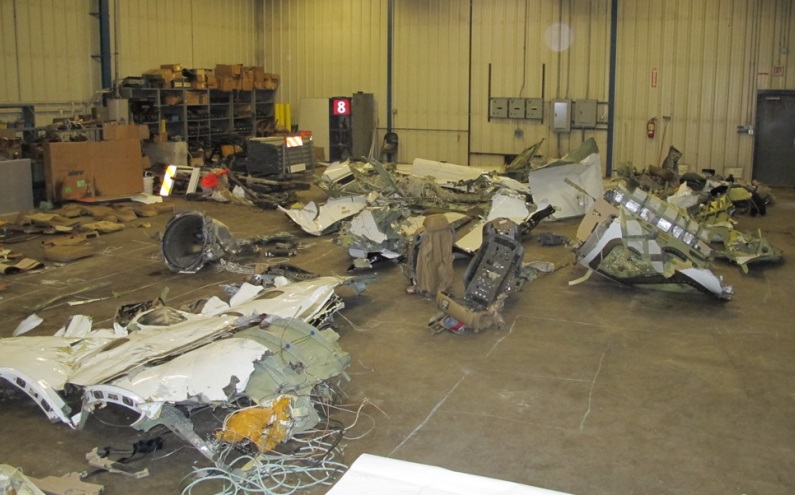 It is likely that the pilot attempted to engage the autopilot after takeoff as he had been trained. However, based on the flight profile, the autopilot was not engaged.

This implied that the pilot failed to confirm autopilot engagement via an indication on the primary flight display (PFD).

The PFD annunciation was the only indication of autopilot engagement. Inadequate flight instrument scanning during this time of elevated workload resulted in the pilot allowing the airplane to climb through the assigned altitude, to develop an overly steep bank angle, to continue through the assigned heading, and to ultimately enter a rapid descent without effective corrective action. A belief that the autopilot was engaged may have contributed to his lack of attention.

The pilot had relatively low time on type having gained a type rating on three weeks earlier.

The pilot had accumulated a total of 56.5 hours in Cessna 525 airplanes. Of that time, 8.7 hours were as pilot-in-command which included the practical test. His most recent logged flight was on December 17 from Orlando International (MCO) to OSU. The pilot owned a Cessna 510 (Mustang) for about 2 years before purchasing the accident airplane. He had logged 372.9 hours total time in Cessna 510 airplanes.

It is also possible that differences between the avionics panel layout on the accident airplane and the [C510] airplane he previously flew resulted in mode confusion and contributed to his failure to engage the autopilot.

The lack of proximal feedback on the [C525] flight guidance panel might have contributed to his failure to notice that the autopilot was not engaged.

The dark night, lack of lighting over the lake and entry into IMC meant:

The pilot likely experienced some level of spatial disorientation due to the dark night lighting conditions, the lack of visual references over the lake, and the encounter with instrument meteorological conditions.

The FAA‘s Airplane Flying Handbook (FAA-H-8083-3A) describes some hazards associated with flying when the ground or horizon are obscured. The handbook states, in part: “The vestibular sense (motion sensing by the inner ear) in particular tends to confuse the pilot. Because of inertia, the sensory areas of the inner ear cannot detect slight changes in the attitude of the airplane, nor can they accurately sense attitude changes that occur at a uniform rate over a period of time. On the other hand, false sensations are often generated; leading the pilot to believe the attitude of the airplane has changed when in fact, it has not. These false sensations result in the pilot experiencing spatial disorientation.”

It is possible that once the pilot became disoriented, the negative learning transfer due to the differences between the attitude indicator display on the accident airplane and the airplane previously flown by the pilot may have hindered his ability to properly apply corrective control inputs.

Fatigue also appears to be a factor:

Available information indicated that the pilot had been awake for nearly 17 hours at the time of the accident. As a result, the pilot was likely fatigued which hindered his ability to manage the high workload environment, maintain an effective instrument scan, provide prompt and accurate control inputs, and to respond to multiple bank angle and descent rate warnings.

Controlled flight into terrain due to pilot spatial disorientation.

Contributing to the accident was pilot fatigue, mode confusion related to the status of the autopilot, and negative learning transfer due to flight guidance panel and attitude indicator differences from the pilot’s previous flight experience.