On 14 November 2019 Flybe Bombardier Dash 8 Q400 G-FLBE suffered a flight control anomaly and diverted to Exeter.  The UK Air Accidents Investigation Branch (AAIB) explain in their safety investigation report (issued 15 October 2020) that shortly after takeoff in a strong crosswind from Newquay, the flight crew noticed that both control columns / control wheel (referred to by AAIB as ‘handwheels’) were offset to the right by up to 40° in order to maintain wings level flight. The crew consulted the Quick Reference Handbook (QRH) but found no checklists that they considered helpful.  After an unfruitful radio discussion to gain engineering advice, the crew made the decision to divert to Exeter, where the aircraft landed safely, 41 minutes after take off. 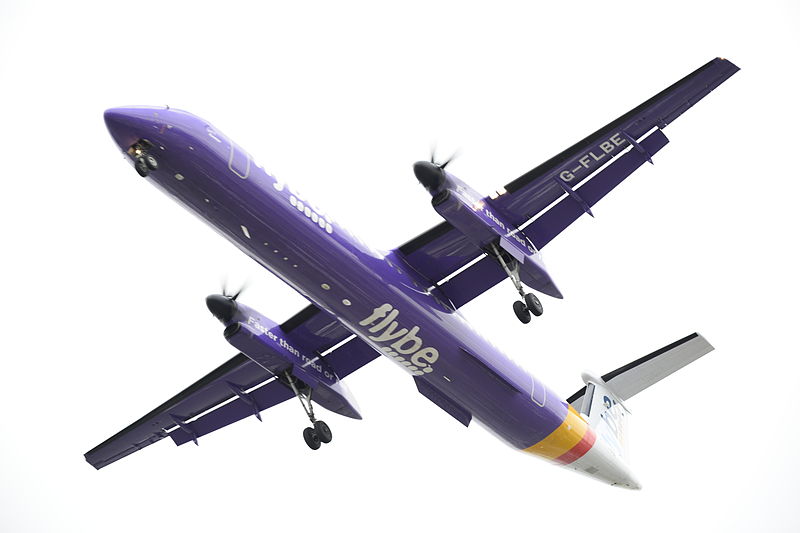 The QRH did contain a checklist for ‘Roll Control Malfunction – Aircraft rolls with no Control Wheel Input’ (reproduced below). 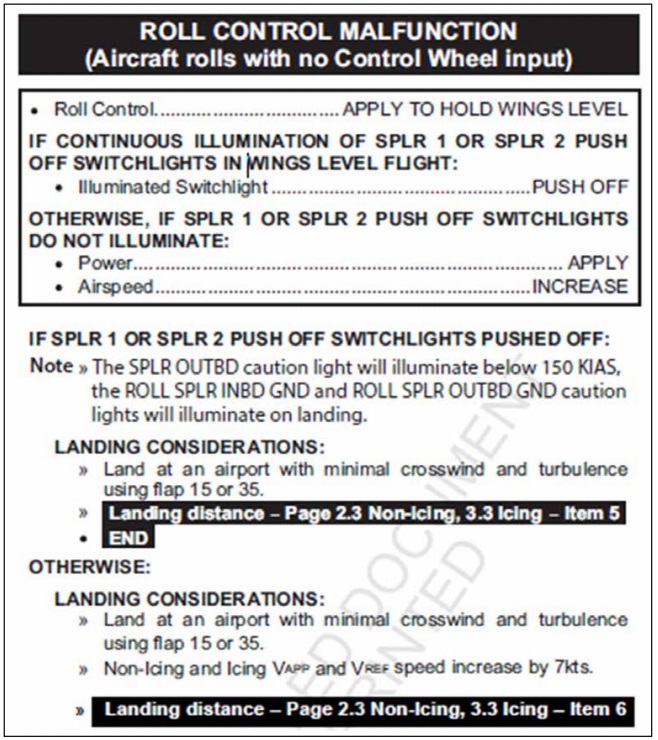 …the pilots did not recognise the relevance of this checklist, possibly because the AP was engaged and would have automatically countered the uncommanded roll to the left.

The checklist commences with several actions, including one, relevant to this case, to increase airspeed.

The manufacturer advised that the intent of increasing airspeed is to improve roll authority with the remaining controls.

Unhelpfully there is no guidance on how much airspeed should be increased.

The second part of the checklist addresses the landing considerations and directs the crew to land at an airport with minimal crosswind and suggests the use of either Flap 15 or 35.  However, the manufacturer stated that any allowable landing Flap setting would be acceptable and the aircraft was cleared to land with Flap 10, 15 or 35; it was only the operator’s version of the QRH that restricted the choice of Flap.

The manufacturer advised that consideration of minimal crosswind was a generic expression that they used in a number of checklists and the intention was to remind pilots to consider the ‘retained lateral control authority for landing’. Therefore, commanders should select an airfield which has the lowest crosswind component.

The checklist also directs the pilots to use the non-normal Landing Distance Required (LDR) table in the QRH. As the pilots felt that the QRH was not relevant, they did not complete these actions and instead used the normal VREF and landing distance. The runway at Exeter was sufficiently long for the increased LDR.

The aircraft was subsequently inspected at Exeter, which…

…revealed that the lower left aileron cable broke just outboard of the engine where it passed over a pulley to accommodate a change in the wing dihedral.  There was no other damage to the aircraft. 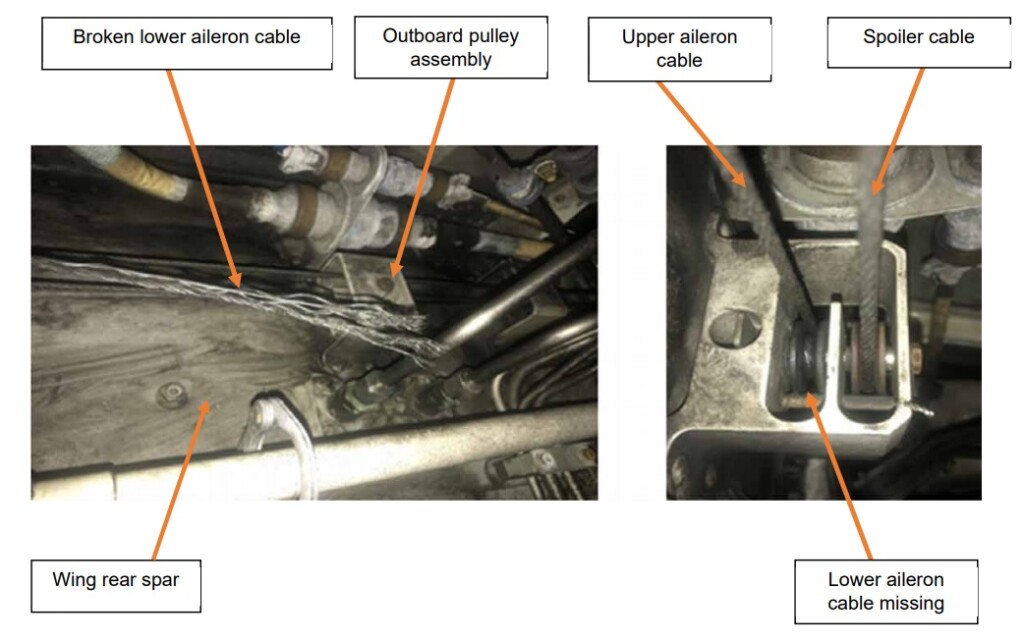 When the handwheels were rotated through their full range of movement, the right aileron operated normally, whereas the left aileron remained in the fully up position. When the outboard section of the broken cable was pulled, the left aileron moved towards the neutral position and when released returned to the up position.

The AAIB explain that…

Modelling of the FDR data by the aircraft manufacturer showed that the left aileron reached a “high trailing edge up” position during periods of the flight. This would result in an uncommand roll that requires corrective action by either the pilot or AP.

A cable failure had been assessed as ‘Minor’ during certification.

Transport Canada analysed the FDR data from this event and concluded that ‘more than adequate control authority was available to the crew for continued safe flight and landing following the cable disconnect’.

In relation to in-service experience:

The manufacturer identified eight events where aileron cables had broken; three were identified because of anomalies in-flight and five were identified while the aircraft was on the ground. These events occurred between 2004 and 2019 and involved operators located in five different countries.

Investigators go on to explain that:

The control cables have a diameter of 1/8 inch and are constructed from 7 strands, each consisting of 19 wires. Six of the strands are wound concentrically around a central strand. 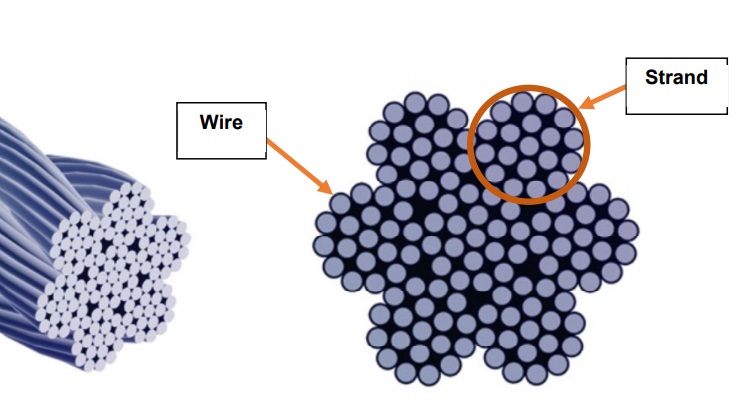 Aileron and spoiler control cables are ‘on-condition’ and subject to a visual inspection and tension check every 2,500 hours.  The aileron cable had been fitted for six years and flown approximately 13,000 hours; it was visually inspected on five occasions.

The last inspection was completed 10 months and 1,100 hours before the failure, when the tension of all four aileron cables on the rear wing spars was found to be below the minimum requirement. Maintenance records show that the cables were re-tensioned in accordance with the Aircraft Maintenance Manual (AMM).

There is no requirement to record the cable tension for trend monitoring [or] for operators to investigate [a] loss of tension..

Bombardier has previously issues communications about cable contamination and opined that the “contamination would accelerate the wear of the cable strands”.  An optional alternative polymer coated cable, had become available in a 2015 Service Bulletin.  This was not fitted to G-FLBE.

The cable and its associated pulley were examined using optical and scanning electron microscopes.

The pulley was found to be worn with a pronounced imprint of the cable around the entire circumference of the groove. Small particles of metallic debris were found embedded in the pulley and it was concluded that these originated from the control cable. Apart from the wear, dimensional checks of the pulley found it to be compliant with the drawing requirements.

While visual inspections are used successfully across the industry as a method of detecting damage in cables, it has an inherent limitation in that it cannot identify internal damage. The probability of identifying broken internal wires can be increased by releasing the cable tension and manipulating the cable…

During the investigation the AAIB came across an unrelated issue with the movement of the right aileron in-flight.

Data from the FDR showed that shortly after G-FLBE levelled at FL200, the aileron stopped responding to movement of the handwheels (Point A). 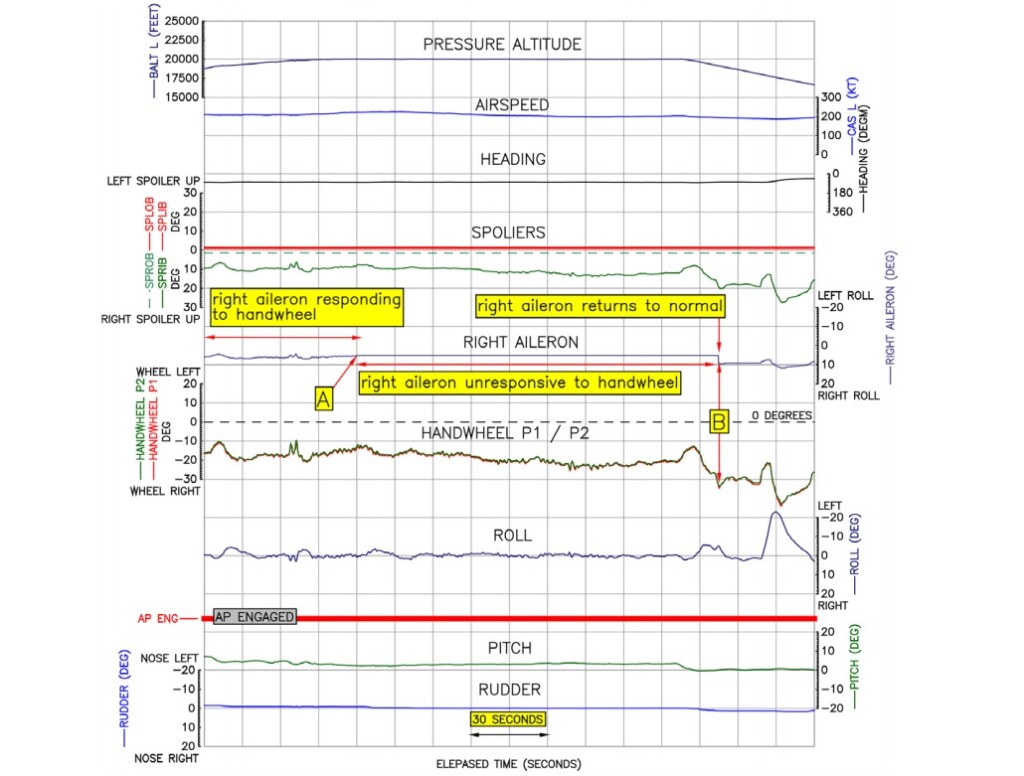 This lasted for about five minutes, with the aileron remaining in an almost fixed position of +5°. During this period, the AP continued to maintain wings level with handwheel positions between 13° CW and 27° CW. The inboard spoilers continued to operate normally during the flight.

As the aircraft started its descent to Exeter, the movement of the aileron suddenly returned to normal (Point B). This coincided with the handwheels being moved by the AP from 27° CW to 35° CW as the aircraft rolled out of a left turn.

When the AAIB examined previous flights contained on the FDR, a similar situation had occurred on 14 of the prior 23 flights of G-FLBE, for periods of 2 to 35 minutes.  The last three flights prior to the incident these periods were 25, 35 and 26 minutes respectively.  This typically started as the aircraft approached the top of climb or was in the cruise, and only once in descent. Resumption of normal aileron movement often occurred when the aircraft entered a turn.

The operator’s Flight Data Monitoring (FDM) team examined data from other Dash 8 Q400 fleet. They first looked at 32 flights from 16 aircraft during, finding 50% had suffered the problem.  They then looked at 51 aircraft for seven days flying in February 2020. The right aileron remained unresponsive for >60 seconds for 36 aircraft.  Twelve of the aircraft suffered the problem on >25% of flights, with G-FLBE at 64% (21 events during 33 flights).

The operator had scheduled work on G-FLBE to isolate the cause of the unresponsive right aileron but ceased trading prior to this being concluded.

The manufacturer examined the data and suggested these possible explanations:

The low cable tension would have resulted in a more gradual movement of the aileron, rather than a sudden movement as it returned to normal. Moreover, after the cables were replaced and correctly tensioned on G-FLBE the problem remained. Therefore, the right aileron becoming unresponsive was likely to have been caused by a restriction, or a combination of restrictions. There was no evidence of the AP disconnecting during periods when the right aileron was unresponsive or when it returned to normal; therefore, the force to overcome the restriction/s did not exceed 17.5 lb at the handwheel.

However, ultimately the cause of this anomaly was not resolved.

It is important that accident investigators and operators fully understand why the aileron becomes unresponsive, its effect on aircraft performance and what rectification action is required. 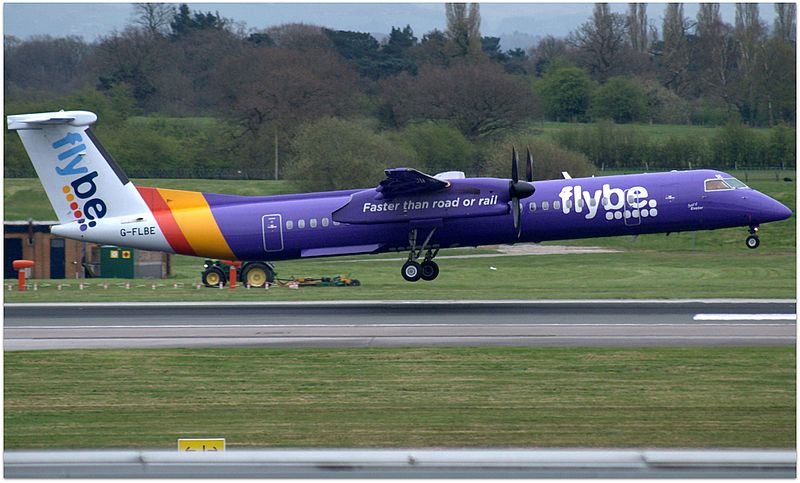 During this investigation, the aircraft manufacturer informed the AAIB that filtering was applied to the position of the handwheels, control columns and rudder pedals recorded on the FDR fitted to G-FLBE.

The filtering was used to smooth out signal noise using a moving average calculation that was not reversible. This meant that during rapid control movements, the actual position of the controls could not be reliably reconstructed from FDR data. The filters also caused the recorded positions of the control inputs to lag the movement of the control surfaces (which were not filtered) by about 0.5-second.

The filtering was in place on all of the operator’s fleet…and other aircraft operating in Europe.

The FDR was designed to meet EUROCAE ED-55 (issued 1990).  That set out FDR parameter accuracy requirements but did not address filtering and nor does ICAO Annex 6.  Both NTSB and AAIB made 7 recommendations in three reports between 1994 and 2003 after filtering problems.

In December 2013 the aircraft manufacturer issued a Service Bulletin to remove the filtering, but it was only applicable to US registered aircraft.

It is essential during safety investigations to have access to FDR data which can be used to reconstruct an accurate and unambiguous time history of each parameter’s activity, which the use of irreversible filters precludes.

The most probable reason for the aileron cable breaking was that its strength had reduced as a result of wear leading to the failure of individual wires within the cable. The cable failed where it passed over a pulley on the rear wing spar where dirt accumulates which can penetrate into the strands and form an abrasive compound. This can accelerate the normal rate of cable wear. Post-modification cables are available which have a sleeve fitted over the susceptible section to prevent the ingress of dirt. The investigation established that the inspection procedure in the AMM would not have detected the damage to individual wires that run inside the cable.

The unresponsive right aileron on G-FLBE was not causal to this serious incident. As the operator ceased trading before they could establish the cause on G-FLBE, and other aircraft in their fleet, further investigation is required to determine if there is a wider safety issue.

Filters applied to some of the flight control parameters recorded on the FDR can affect the reconstruction of the rapid movement of the controls. Such filters are not permitted to be installed on the DHC-8-400 aircraft registered in the USA, but there is no similar requirement on aircraft registered in Europe or the UK. While this did not affect this investigation, this could affect other safety investigations.

Following this occurrence, the manufacturer intends to amend the periodic inspection procedure.  This will add requirements to:

The aircraft manufacturer advised that it would provide literature to operators to monitor for unresponsive ailerons using their Flight Data Monitoring Programmes.

In this case the operator went into administration and ceased operating before the investigation was complete.  Its fleet were mostly leased and were returned to their owners and put under the control of CAMO’s contracted by the leasing companies.  The obligation to support the investigation ended with entering administration, which is not ideal.