Flybe DHC Dash 8 Q400 G-JEDU made an emergency landing at Belfast International Airport with its Nose Landing Gear (NLG) retracted on 10 November 2017 after cockpit indications showed that the nose landing gear doors had not closed after landing gear retraction. 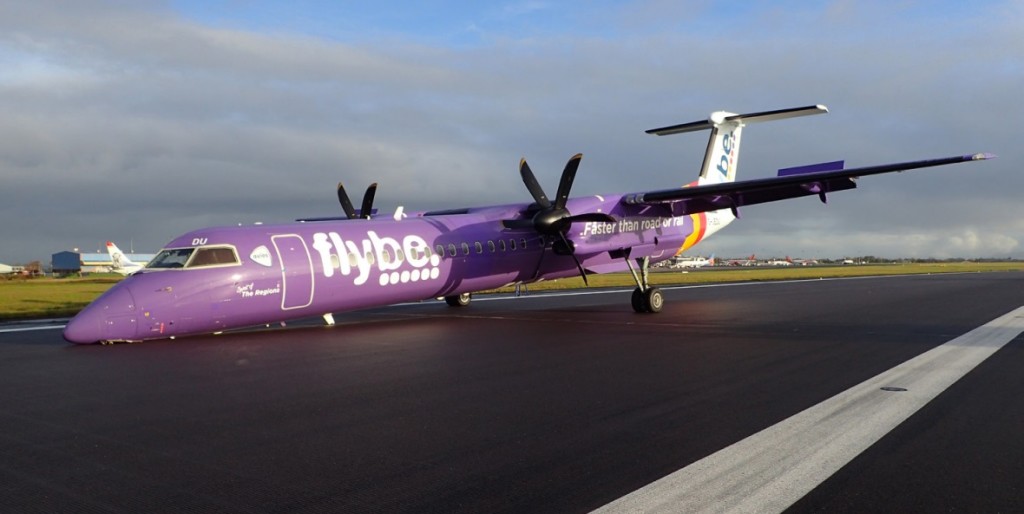 There was an emergency evacuation and two of the 53 passengers sustained minor injuries.  Evacuation was complicated as the forward left airstair door was at a shallow angle while the the rear door sill height was large.

…determined that…the forward NLG doors starting to close while the NLG was still in transit to the up position. The NLG tyres contacted the forward doors, causing the NLG to rotate off-centre. Although the NLG subsequently retracted, the forward doors remained open and the tyres became jammed in the NLG bay. This prevented the nose landing gear from extending when subsequently commanded. 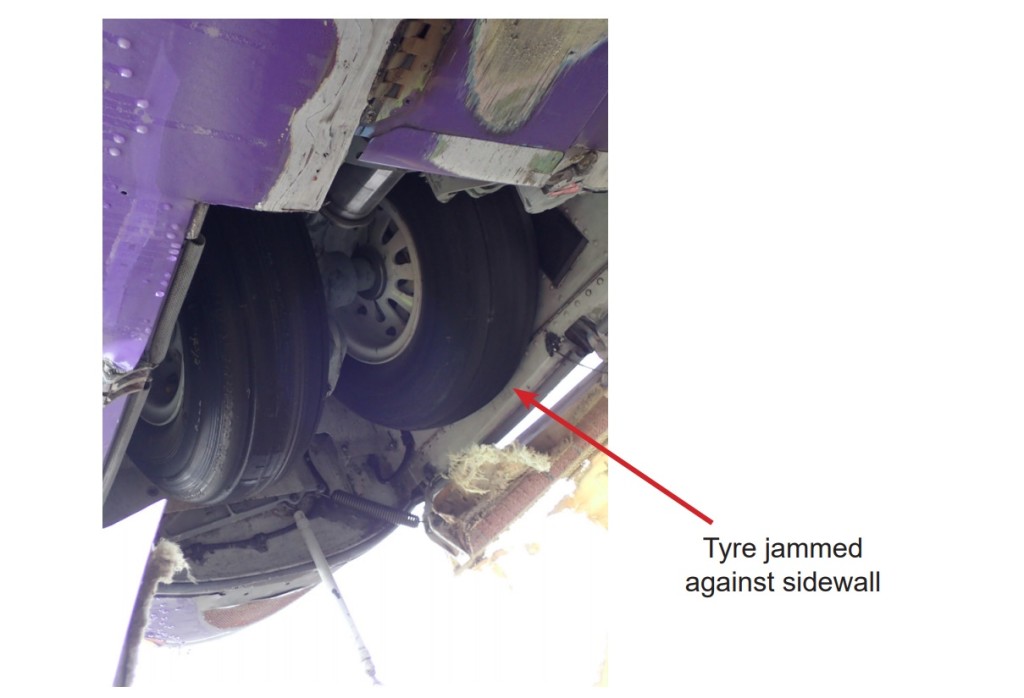 [After the incident it was found that] the NLG alternate release cable remained jammed despite attempts to pull it using substantial force, however the uplock could be heard releasing when the cable was pulled. A crowbar was used to rotate and centre the NLG, releasing the right tyre from the jammed position; once the gear was centred, it extended under gravity and locked down.

During a go-around at Birmingham International Airport on 1 November 2017, G-JEDU’s landing gear failed to retract when selected.  A circuit was flown gear down and a safe landing made.  Damage was found to the lower edge of the forward right NLG door and the door seal.  The problem could not be replicated during subsequent maintenance.  The forward right NLG door and door actuator were replaced and the aircraft returned to service. The AAIB reviewed Flight Data Monitoring (FDM) data and discovered that:

During a carefully controlled trial after the Belfast occurrence, anomalous inductance values were detected in a NLG up-lock sensor harness (‘NGLK 1’) when jams were reproduced.  During removal of the harness it was noticed that there was little slack and  a tight bend where it entered the bulhead connector. 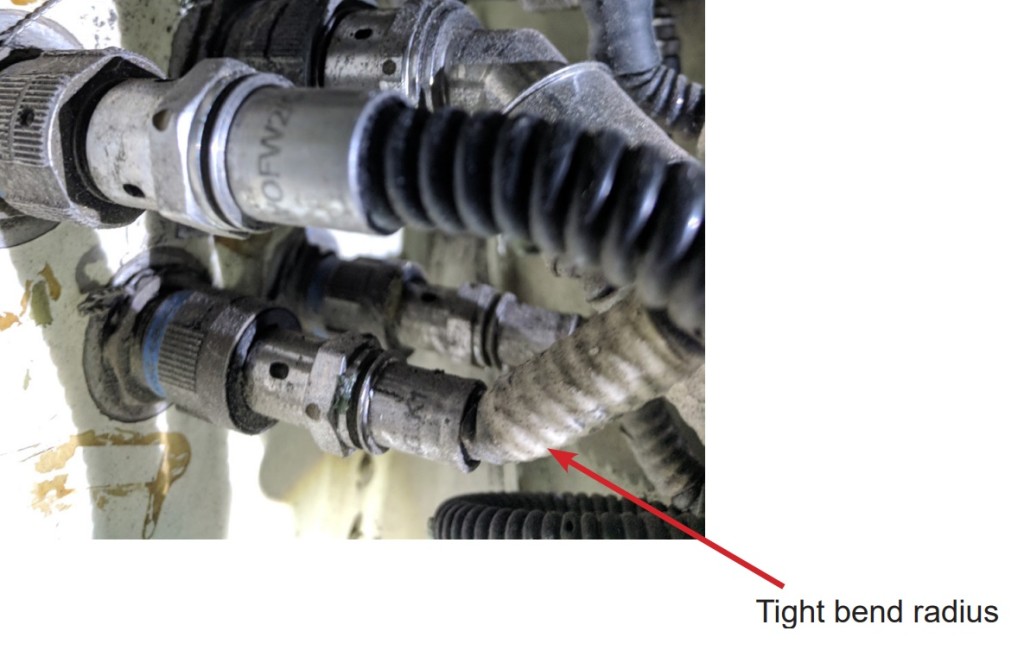 A computed tomography (CT) scan “identified that one of the two conductors in the NGLK1 harness was fractured…approximately 15 cm above the sensor. In addition, a number of sites which indicated the initiation of possible similar damage were identified”. The AAIB found that:

The damage to the harness resulted from a cyclically-driven fatigue failure mechanism, which occurred because the harness had been secured with a non-flexible cable tie which restricted it from flexing during normal nose landing gear operation. 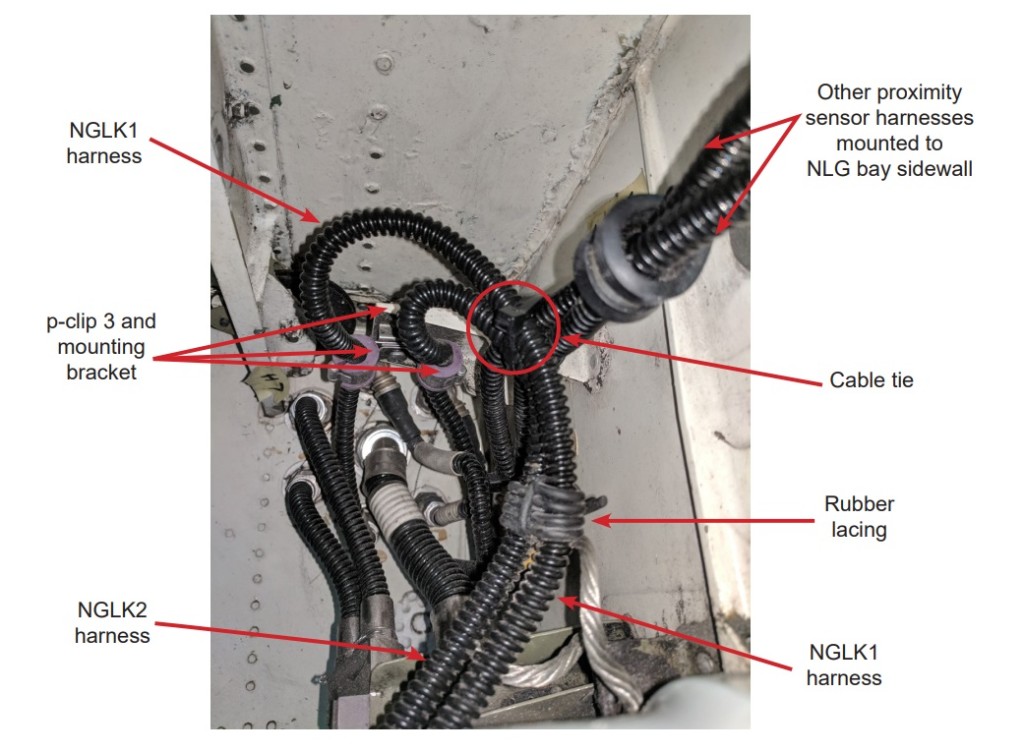 The aircraft and landing gear manufacturers are aware of other instances of NGLK sensor harness failures in normal operation. During normal retraction, extension and steering operations, the NGLK harnesses are subject to dynamic movement and bending which can result in degradation and breakage of the internal wires. The landing gear manufacturer [had already] initiated a product improvement review of the proximity sensor harness with the aim of improving the performance of the landing gear system.

…mechanical damage within the electrical harness of the primary ‘nose gear lock’ proximity sensor caused an intermittent and erroneous sensor state change during landing gear retraction. The measured inductance value associated with the sensor state change was not sufficiently high for the sensor to be flagged as faulted, and the erroneous state change was therefore considered valid. This had the effect of interrupting the NLG retraction sequence by causing the forward NLG doors to close prematurely while the NLG was still retracting, such that the tyres came into contact with the doors. When the NLG finally retracted, the tyres became jammed in the NLG bay, preventing it from extending when subsequently commanded. The flight crew followed the appropriate procedures for dealing with the incident, which led to the safe landing and evacuation.

The AAIB notes that:

The aircraft manufacturer has taken action to clarify nose landing gear proximity sensor harness routing [an October 2018 Service Letter] and attachment instructions in the Aircraft Maintenance Manual, and has published inspection requirements. …the operator carried out an inspection of the NLG proximity sensor harness routing on its Dash 8 Q400 fleet and undertook rectification of any anomalies noted. The aircraft and landing gear manufacturers are also working to identify a more flexible harness design; this activity had been initiated before the accident to G-JEDU.

The Failure Mode and Effects Criticality Analysis (FMECA) for the Dash 8 Q400 proximity sensing system, conducted as part of the aircraft certification process, identified seven potential failure modes for the NGLK sensors, all of which had a severity classification of ‘minor’. These included electrical faults (internal open or short circuit), mechanical faults and inductance drift of the sensors. For each of these faults the documented ‘system effect’ indicated that the PSEU would identify that the sensor was faulted and refer to the remaining valid sensor, such that the nose landing gear would safely extend or retract.

The FMECA did not identify any failure modes relating to erroneous intermittent change of state of the NGLK sensors which did not meet the threshold for the sensor to be flagged as faulted. Following this accident, the landing gear manufacturer undertook to produce a revised FMECA for all landing gear proximity sensors based on the failure modes identified in this investigation. For the NGLK sensors this resulted in the new failure modes ‘NGLK1/2 indicating intermittent NEAR while gear in transit’ being identified for the extension and retraction case. For the retraction case the ‘effects of failure’ included ‘NGLK [1 or 2] indicates intermittent near, NLG SSV de-energised intermittently, NLG doors may not completely close’ with the ‘end effect’ being ‘Potential collision between NLG and forward doors.’ However, this accident showed that the plausible end effect is failure of NLG to extend following a collision between the NLG and forward doors.

At the time the AAIB report was published “the revised failure modes had not been fully evaluated” but are expected to be classified as ‘Major’. https://youtu.be/DShW-10lbd0 Safety Resources We also have written: