A Snowbird aircraft was diverted from the rest of the deployed team due to an in-flight emergency.  The aircraft was repaired, including a successful maintenance flight test, and was refuelled for a later departure to re-join the Snowbird team.  The aircraft tire was due for its 7-day inspection/refill and nitrogen tanks were borrowed from a local facility to service the aircraft.  While topping up the right hand main tire with nitrogen, the tire was over pressurized and exploded.  The force of the explosion seriously damaged the right hand main landing gear leg, the wing rear spar and the split rim was propelled into and crushed the right hand diesel tank.  The aircraft sustained “Category B” damage, primarily due to the damage in the wing spar.  There were no injuries resulting from this occurrence. 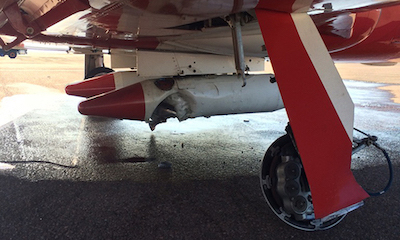 The investigation determined that the technician misinterpreted the gauges on this unfamiliar equipment, and attempted to fill the tire to 150 Bars instead of 150 pounds per square inches (PSI).  The wheel/tire assembly failed around 120 Bars (over 1700 PSI).  The investigation is focussing on the human factors aspects surrounding this occurrence.

UPDATE 25 November 2016: The RCAF say that during the maintenance “the pilot was showing it to students from the local Flight College”:

The investigation concluded that all reasons why technicians elect to deviate from the Approved Maintenance Program by not using the inflator assembly kit, either because of lack of availability or familiarity with the kit, are avoidable. Preventive measures are recommended to alleviate those circumstances.

Further it is recommended:

…the inflating procedure manual be clarified to alleviate any potential confusion.

The investigation also put forth safety recommendations with respect to showcasing aircraft that are being maintained.

While at RAF Odiham, the main landing gear tires were found to be low. A dual-pressure inflation kit was used, the low side reported to be set for 60 psi. The high pressure side was reported to be around 500 psi. Normal tire pressure is 105 psi. During inflation, the left hand inboard tire ruptured. Rim fragments caused damage to the left hand and right hand landing gear as well as the fuselage. The investigation is focussing on human factors procedures for the use of unfamiliar equipment. 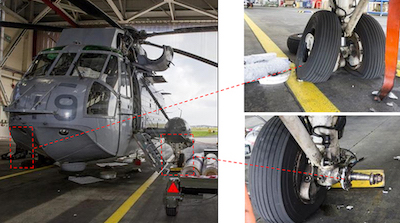 Note the N2 GSE bottle trolley next to the aircraft.

UPDATE 25 November 2016: This investigation is ongoing.

UPDATE 2 November 2017: This incident and 4 others were discussed by the UK Military Aviation Authority (MAA) at an RAeS conference.  A common thread was the use of GSE available on the line rather than tyre inflation kits from stores (due to stores being shut, kits unserviceable or a separate regulator needed with the kit not being available or issued).

Whilst a technician was rectifying an under-inflated tyre, a pressure of approximately six times the normal tyre pressure was developed. The tie bolts on the wheel failed, the assembly exploded and the technician was seriously injured.

It is not unusual for aircraft maintenance companies to use high pressure nitrogen supplies for a variety of purposes as well as for tyre inflation.

It is usual to use clear annotations to ensure that only appropriately regulated pressures are delivered to tyre valves and the higher pressure supplies are restricted to use for accumulators, oleo struts etc.

The original purpose of the rig used on this occasion could not be determined, but personnel from the owning company have stated that it was only used for inflating tyres. It bore no annotation, however, drawing the attention of operators to the fact that it was capable of delivering pressures far in excess of that required for tyre inflation.

Also, the delivery pressure indication on the rig was in bars while all other annotated pressures (as well as most quoted aircraft tyre pressures) were in psi.

Without the regulator being set to reduce the cylinder pressure to a figure near the rated pressure of the tyre, a moderately lengthy period spent with the lever fully deflected would have enabled the pressure in the small tyre to rise far above its rated value. A process by which the grossly elevated tyre pressure failed the wheel tie bolts can thus be envisaged.

In this video, confusion between bars and psi was reported (watch for the tyre debris): Deliberate tyre burst tests at Dunlop Aircraft Tyres are shown in this video:

Boeing have issued this guidance: Airplane Wheel and Tire Servicing