Deliberate Action: A Mindful Method from the Nuclear Navy

In his book Turn the Ship Around! David Marquet describes a technique developed while CO of the US Navy‘s Los Angeles Class SSN USS Santa Fe, to reduce errors and increase mindfulness during critical tasks. 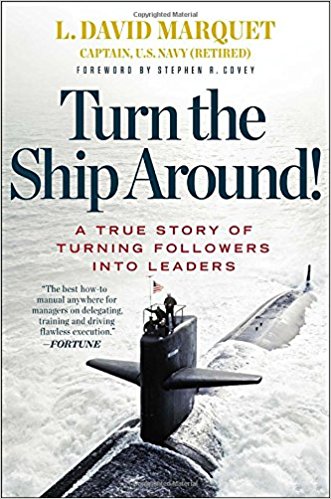 During the hook up to 440V shore power a Petty Officer violated the ‘red tag procedure’, intended to stop power being applied while a system was still in an unsafe condition.  As he recounts:

In this case, a sailor had energized breakers on the pier after the conditions for energizing them had been met (so there was no hazard), but he hadn’t cleared the red tag before doing so indicating we were just lucky). You don’t want to he accidentally safe.

It was widely assumed on-board that that being found to have violated of such a basic safety procedure would see the accused subject to the Captain’s Mast  This is a process for judgement and non-judicial punishment, ‘pour encourager les autres’ to pay attention.

But Marquet was a man on a mission to turnaround the USS Santa Fe, the worst performing submarine in the navy.

“Petty Officer M. can you tell me what happened?”

“You moved a red tag aside?”

“Yes, it was hanging right in front of the breaker. There was one on each of the three pier breakers, three across, right then.”

I’m sure he was expecting to go to captain’s mast and be fined.  Yet, he was willing to tell us the truth quite bluntly without any attempt at obfuscation. This needed no be rewarded.

“Thank you very much for your candor. You and the rest of the watch team can go home. Supervisors stay behind.”  This caused a stir.

What no recriminations? No captain‘s mast? No yelling?

Marquet knew he was was taking a risk by behaving differently to expectations:

However, I felt the candor and honesty of Petty Officer M were more important than continuing the current process of inquisition, fear, and punishment.

So he turned to his supervisors:

“Now, gentlemen, how are we going to prevent this from happening again?”

And that’s what we spent the next seven and a half hours talking about.

The first suggestion? That old favourite: refresher training.  Marquet dismissed this as there was no deficiency in knowledge.

The next suggestion was more supervision.  In discussion they realised that may have helped stop the second and third breakers being closed, but would have been too late to stop the first.  Marquet pushed his team to come up with something that would prevented the initial error.

Exasperated with my unwillingness to accept any of the rote answers, someone blurted out, “Captain, mistakes just happen!”

Now we were getting somewhere.

We discussed what it would take to reduce mistakes made at the deck plate level, at the interface between the operators and the equipment, not simply discover them afterward. These were mistakes such as turning the wrong valve, opening the wrong breaker, and moving red tags – actions no one consciously meant to do.

“Sir, it’s attention to detail.” This was a commonly used phrase as well, but telling the men to pay more attention didn’t seem likely to make a difference in the long run in the number of mistakes. We’d tried that before.

“Well, he was just in auto. He didn’t engage his brain before he did what he did; he was just executing a procedure.” I thought that was perceptive.

They discussed how to ‘engage your brain before acting’. They decided:

…we wanted people to act deliberately… This meant that prior to any action, the operator paused, vocalised and gestured toward what he was about to do, and only after taking a deliberate pause would he execute the action.

Our intent was to…introduce deliberateness in the mind of the operator, it didn’t matter whether anyone was around or not. Deliberate actions were not performed for the benefit of an observer or an inspector. They weren’t for show.

On Monday we had quarters on the pier to discuss the concept ‘take deliberate action’ with the crew.  I first explained what had happened with the red tag and the critique of the incident, and then I described what thinking deliberately meant and why we were going to do it.

Even though it wasn’t presented as a bargain, I think that the crew, knowing their shipmate had been spared captain’s mast, were more receptive to the alternative-take deliberate action.

A similar ‘Pointing and Calling‘ technique (called shisa kanko, shisa kakunin kanko or yubisashi koshō) has been used by Japanese train drivers and conductors for over a century:  Why Japan’s Rail Workers Can’t Stop Pointing at Things: A seemingly silly gesture is done for the sake of safety.

A 1994 study by the Railway Technical Research Institute showed that pointing and calling reduced mistakes by almost 85 percent when doing a simple tasks.

During their implementation, Marquet’s team still faced the misconception that ‘deliberate action’ was for just training and on operations it could be dispensed with.  His argument though was that on operations a critical error could be far more catastrophic.

Later, when Santa Fe earned the highest grade on our reactor operations inspection that anyone had seen, the senior inspector told me this:

“Your guys made the same mistakes – no, your guys tried to make the same number of mistakes – as everyone else.  But the mistakes never happened because of deliberate action.  Either they were corrected by the operator himself or by a teammate.”‘

He was describing a resilient organization, one where error propagation is stopped.

These approaches are powerful as they aren’t limited to one particular task.  However, its still worth looking a aspects of design and task procedure.  Although not described in detail, simply handing red tags (as implied) is not as powerful as applying a physical lock out for example.

Signs are not in themselves a strong defence, as demonstrated today during a visit by US Vice President Mike Pence to NASA‘s Kennedy Space Center.

Are you trusted to use good judgement to creatively seek improvements or do you reach for a ‘Just Culpability’ decision aid to judge?

Dr. Klein warns against top down, control based organizations that command the obedience of crew, focus on mistake avoidance and punish followers not in strict compliance with the rules. Klein recommends that, instead of controlling the actions of followers, leaders empower their men to become leaders themselves.

UPDATE 14 March 2018: Marquet is discussed in The Command and Control Model is Outdated, Even The Military Says So!

You Can Train Competence. You Can’t Train Clarity

…if you want empowered and trusted people operating through mission command, your command philosophy needs to give your subordinates your intent and the boundaries in which they can operate.