The US Chemical Safety Board (CSB) report that they have “uncovered multiple process safety management deficiencies” that led to the 18 February 2015, explosion at the ExxonMobil Torrance refinery, California and an associated serious near miss.

…two workers were injured when an explosion occurred in the refinery’s electrostatic precipitator, or ESP, which is a piece equipment used to control air pollution. Due to a series of events that unfolded over several days, hydrocarbons accumulated inside the ESP. The result was a blast that dispersed large quantities of catalyst dust up to a mile away from the facility. The sequence of events that eventually led to the explosion at the refinery began on February 12, 2015, when problems with a piece of equipment called an expander caused the refinery’s fluid catalytic cracking, or FCC, unit to be put into a idled condition referred to as safe park.

With the FCC unit shut down, steam was forced into a reactor to prevent hydrocarbons from flowing back from the main distillation column. On the morning of the accident, this steam was escaping through an open flange on the expander, preventing operators from continuing their maintenance work. It had travelled through a leaking slide valve connected to the reactor.

An outside supervisor then reduced the amount of steam being forced into the reactor so that work could continue. However, at the time, workers were unaware that hydrocarbons were leaking into the main distillation column from interconnected equipment. As the pressure of the steam dropped, the hydrocarbons flowed back into the reactor, out through the leaking slide valve and eventually into the ESP. There the hydrocarbons found an ignition source – and exploded.

The explosion scattered debris around the site:

One of these pieces of debris hit scaffolding in the refinery’s alkylation unit, narrowly missing a tank containing tens of thousands of pounds of modified hydrofluoric acid, or HF.

HF is used by some refineries in a step for the manufacture of unleaded fuel.

That debris is reported to have been equipment weighing 36 tonnes (80,000 lb):

That neighbouring community includes 333,000 residents, 71 schools, and 8 hospitals within 3 miles of the ExxonMobil Torrance facility. 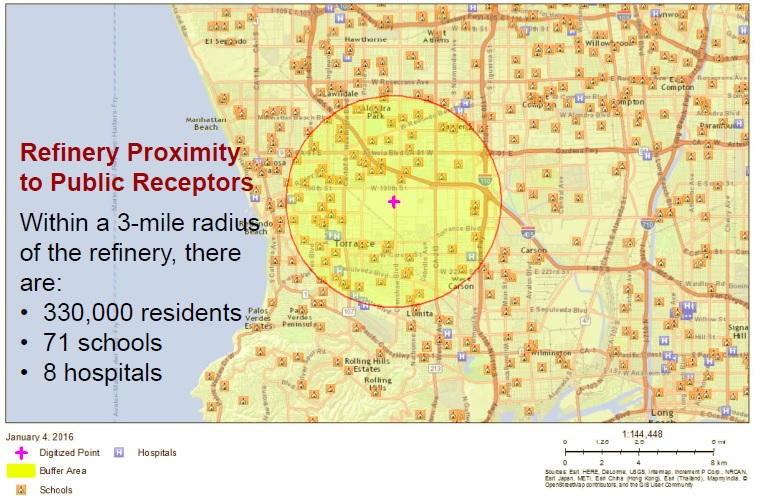 Hydrofluoric acid can pose a severe hazard to the population and environment if a release occurs. After HF acid vaporizes it condenses into small droplets that form a dense low-lying cloud that will travel along the ground for several miles and can cause severe damage to the respiratory system, skin, and bones of those who are exposed, potentially resulting in death.

The CSB determined that had the debris struck the [HF] tank, a rupture could have been possible, resulting in a potentially catastrophic release of extremely toxic modified HF into the neighbouring community.

It is reported by the local media that ExxonMobil disagree on the threat to the community amd says it had taken “unspecified” “corrective actions” to prevent a re-occurrence.

It is also reported by the press that ExxonMobil claim to have 136,000 pages of documentation and 67 interviews to the CSB. Yet the CSB say:

…investigators have faced a lack of cooperation from ExxonMobil to comply with their requests for information about the near miss incident involving the alkylation unit and modified HF even after repeated voluntary requests and subpoenas. To date, the CSB has no or incomplete responses to 49% of its subpoena requests.

Despite these challenges, the team is making strides to complete their investigation, including analysis of the near miss incident.

In order to perform work to bring the FCC unit back online, ExxonMobil determined they needed to deviate from several existing procedures. This required a document called a variance, which is a written temporary deviation from normal operating procedures. The variance used was created in 2012 to address problems with the expander.

CSB investigators found that ExxonMobil did not conduct a management of change review before implementing this outdated variance, even though conditions within the FCC unit had changed over the previous three years.

Also, ExxonMobil performed inadequate process hazard analyses, which could have identified more effective safeguards against the flow of hydrocarbons, such a blind or de-inventorying the main distillation column.

Although our investigation found two different process hazard analyses that considered a combustible mixture igniting in the electrostatic precipitator, no effective safeguards were implemented at the refinery to mitigate this threat.

The CSB note these safety management system failures in relation to non-routine work are similar to those seen in other CSB refinery investigations, including the 6 August 2012, fire at the Chevron Refinery in Richmond, California.

That fire endangered 19 workers and sent more than 15,000 residents to the hospital for medical attention. In a final report on that accident, the CSB proposed recommendations for substantial changes to the way refineries are regulated in California. The agency also added process safety management reform to its list of most wanted safety improvements.

It is assumed by many regulators that if some of these activities are simply written down, many incidents won’t happen. But too often this is a paperwork exercise that does not fully identify hazards and opportunities for safety.

In the introduction to an October 2013 International Association of Oil and Gas Producers (IOGP) publication on safety leadership, Rex Tillerson, Chairman & CEO of ExxonMobil is quoted as saying:

Written rules, standards and procedures, while important and necessary are not enough. Companies must develop a culture in which the value of safety is embedded in every level of the workforce.

A CSB presentation from 13 Jan 2016 can be found here.
Cal/OSHA has issued 19 citations to ExxonMobil Refining & Supply Company for occupational safety violations following the explosion, along with penalties totalling $566,600.

In September 2015, ExxonMobil concluded a deal to sell the 750 acre Torrance refinery to PBF Energy once repairs are complete in 2016.

UPDATE 28 June 2016: Exxon’s woes continue: Exxon struggles to run California plant long enough to dump it  Exxon had to run the refinery for 15 days before the handover:

That’s turning into a struggle. More than a month after Exxon restarted a key gasoline-making unit that was damaged in a blast last year, PBF still hasn’t taken control of the Torrance plant. In the latest snag, a crane fell over Monday. While Exxon says it had no effect on production and the handover to PBF is still scheduled for mid year, the incident highlights the challenges faced in finalizing the $537.5 million sale.

For PBF, which said in February it expected to take control of the plant around May 1, the delays are keeping the refiner from fully benefiting from typically higher margins seen during peak driving season…

Exxon resumed operation of the catalytic cracker on May 17, more than a year after a February 2015 explosion damaged a key pollution control unit. The restart has faced multiple hurdles since.

On May 26, the company had to shut and repair a hydrogen pipeline after a fire, according to a regulatory filing. Monday’s crane accident, which injured three people, happened as a breakdown in “some units” caused flaring at the plant, Todd Spitler, a spokesman, said in an e-mail.

UPDATE 23 November 2016: The CSB deploy to incident that injured six workers, four critically, the day before at the ExxonMobil Refinery in Baton Rouge, Louisiana.

According to initial inquiries, flammable vapors were released during unplanned maintenance around a pump. Although there was no explosion, the release ignited and caused a large fire.

“The CSB has investigated too many incidents at refineries across the country,” said Chairperson Vanessa Sutherland. “As an agency, we continue to be concerned about the safety of oil and gas workers and their surrounding communities. The management of risk is an important part of any high hazard operation.”

UPDATE 3 May 2017: The CSB, which is under threat of closure by the Trump administration, has released its final report on this explosion and a video .

In its final report, the CSB describes multiple gaps in the refinery’s process safety management system, allowing for the operation of the FCC unit without pre-established safe operating limits and criteria for a shut down.  The refinery relied on safeguards that could not be verified, and re-used a previous procedure deviation without a sufficient hazard analysis of the current process conditions.

Finally, the slide valve – a safety-critical safeguard within the system – was degraded significantly. The CSB notes that it is vital to ensure that safety critical equipment can successfully carry out its intended function. As a result, when the valve was needed during an emergency, it did not work as intended, and hydrocarbons were able to reach an ignition source. 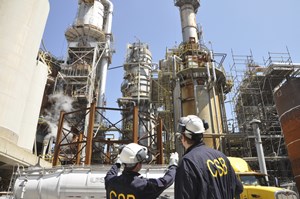 CSB on Site at the Torrance Blast (Credit: CSB)

Chairperson Sutherland said, “There are valuable lessons to be learned and applied at this refinery, and to all refineries in the U.S.  Keeping our refineries operating safely is critical to the well-being of the employees and surrounding communities, as well as to the economy.”

Chairperson Sutherland said, “Adoption of and adherence to a robust safety management process would have prevented these other incidents.  In working with inherently dangerous products, it is critical to conduct a robust risk management analysis with the intent of continually safety improvement.”

In July 2016, the Torrance refinery was sold by ExxonMobil to PBF Holdings Company, LLC, which now operates as the Torrance Refining Company. Since the February 2015 explosion, the refinery has experienced multiple incidents.

In relation to the possible release of highly toxic HF, the local press comment:

ExxonMobil “resisted CSB requests for safety information pertaining to the potential release of HF in the event the tanks were struck by explosion debris,” the report said. “ExxonMobil continues to refuse to provide the CSB with information detailing safeguards to prevent or mitigate a release of HF.

“ExxonMobil had installed multiple mitigation systems to control a release of HF, but has not provided the CSB with documentation to explain those control systems,” the agency added. “Therefore, the CSB could not analyze whether the safeguards could prevent a potential release of HF outside the refinery property.”

The company contends “the requested documents are not within the CSB’s jurisdiction in investigating” the blast, the agency said.

ExxonMobil said Wednesday the company “strongly disagrees’ with any statement that questions “our responsiveness to the investigation.

“Our cooperation is evident in the 73-page report,” company spokesman Todd Spitler said via email. “We offered to make additional documents available if the CSB could provide a sufficient basis for the documents and agreed to respect our commercial confidentiality, which they have not done.”

The CSB say the blast “scattered catalyst dust up to a mile away from the facility into the nearby community”. The local press report:

The report says little about the health effects of the so-called catalyst dust that fell on parts of the community in the blast’s wake.

The CSB said it also “subpoenaed health studies of the catalyst” from ExxonMobil, but either none was available for review or no such studies were performed.

“The CSB is not aware if there are long-term health effects from exposure to this catalyst,” the report said. “The CSB therefore cannot make a statement regarding the toxicity or potential health effects of the catalyst dust.”

We have also commented on the regulatory challenges, safety culture and SMS ‘shelfware’ here:

Aerossurance has extensive safety management and accident analysis experience.  For safety advice you can trust, contact us at: enquiries@aerossurance.com