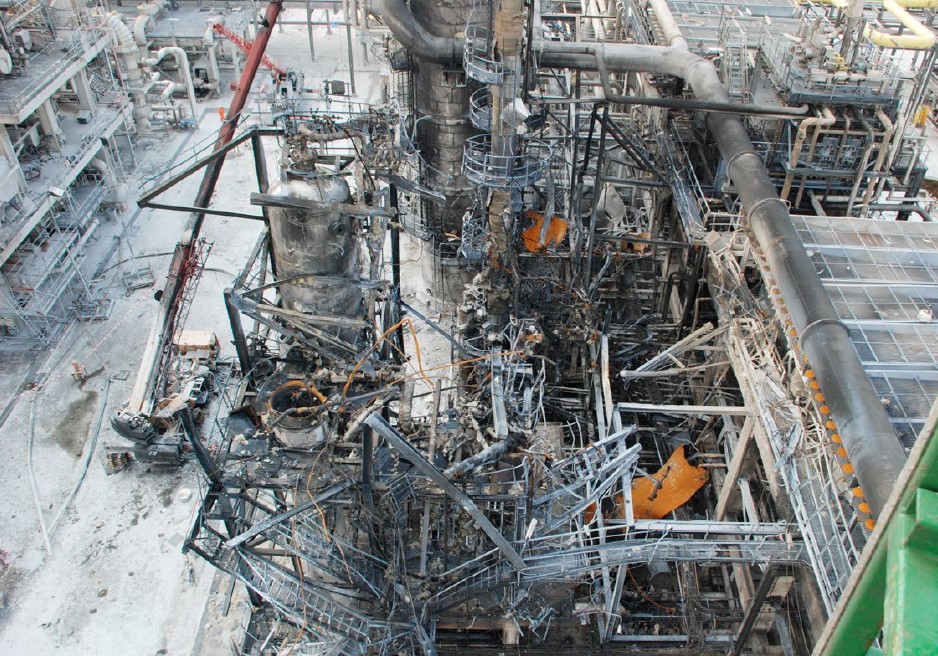 Shell Moerdijk U4800 Plant After the Explosion (Credit: Police via DSB)

The Dutch Safety Board has investigated this incident.  Currently only the investigation summary is available in English.

UPDATE 10 December 2015: The full report in English is now released.  The article below has been enhanced with extra details. They have also issued a VIDEO.

The Propylene Oxide-Styrene Monomer 2 (MSPO2) plant had been shut down to replace catalyst granules and was being restarted.  Operators manually increased the warming of the reactors with ethylbenzene.  This triggered an unanticipated reaction, gas formation and a pressure build up.  Fluctuations in pressure did not cause alarm because operators had become used to fluctuations during previous re-starts and considered them normal.  An automatic protection system tripped but had the unintended consequences of preventing the venting of the gas.  The rapid pressure rise in the reactors resulted in their explosion.

Further to the failure to learn from the event in China, the DSB report also noted a reaction runaway occurred at Moerdijk in 1999, despite repeated prior statements by Shell that such an event could not happen in that reactor.  The DSB note that the 1999 event, that undermined Shell’s earlier technical analysis, did not prompt a fundamental review.

The concept of a failure to learn has been raised in relation to BP after the 2005 Texas City refinery explosion, prior to the 2010 Macondo / Deepwater Horizon disaster.  It is also the subject of a book of the same title by Australian National University Emeritus Professor Andrew Hopkins.  It also can apply to a failure to learn from accidents to other organisations (as we discussed in the case of a US helicopter operator).

In contrast the DSB highlight that the local fire and emergency services had learnt from past emergencies (such as the nearby 2011 fire at the Chemie-Pack facility).  There were areas for improvement though, such as emergency alerting of the local population.

In light of the shortcomings found at the plant, the DSB oddly report they had a “positive view” of the site’s “comprehensive” safety management system (SMS). They are also complimentary about Shell initiatives such as ‘Hearts and Minds‘ and note that the company has been seen as a leader in safety.  However the DSB note that Hearts and Minds was not applied systematically and that since 2011 only one safety culture survey had occurred and that involved just 28 of 800 people on site (3.5%). Ironically, Shell ranked themselves as ‘calculative’ on the Hearts and Minds culture scale, without the DSB say, any substantive measurements: Oddly this median level is also described as ‘the required level’ perhaps indicating a lack of ambition or true commitment to safety enhancement. The DSB go on to say that Shell had failed to follow a number of their own procedures including their Management of Change process. In other organisations it has been apparent after accidents that the documented SMS was not an effective, living system but in practice was just ‘shelfware’ (as we recently discussed in the case of Metro-North).

Another organisation with a positive reputation for safety, DuPont, has recently suffered a series of fatal accidents that highlighted poor maintenance and risk assessment.  This resulted in enforcement action and much criticism from unions, regulators and accident investigators. The DSB comment that the Shell site is subject to “system-related supervision” by the regulator (effectively a form of performance based regulation [PBR]) while highlighting the importance of the operator identifying their own shortcomings.  They also say that regulators should pay more attention to critical processes such as maintenance and start-up.

The DSB have made recommendations to Shell on risk assessment (including the challenge of previous assumptions) and enhancing their incident analysis and knowledge management.

We have previously reported on two other cases were inadequate risk assessment by Shell have been identified in accident investigation reports issued this year:

Aerossurance has previously published this process safety article: DuPont Reputational Explosion
The International Association of Oil and Gas Producers (IOGP) has published the report: Shaping safety culture through safety leadership.  In particular Section 3.3 discusses learning.
You may also be interested in these Aerossurance articles:

Tanmay Vora expands on that with this graphic that highlights the biases that Gino and Staats identify: UPDATE March 2016: The DSB has also launched an investigation into the emission of 25 tonnes of ethylene oxide at Shell Moerdijk.  It appears this leak, following a repair in November 2015, was only discovered 2.5 months later.

UPDATE 3 May 2016: The US National Transportation Safety Board (NTSB) discussed safety culture and a failure to learn at a hearing into an accident at a Board Meeting on a Washington Metrorail (WMATA) smoke and arcing accident that occurred on 15 Jan 2015 (VIDEO).