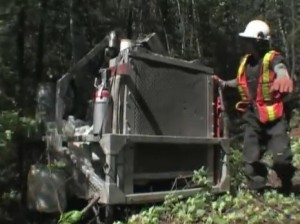 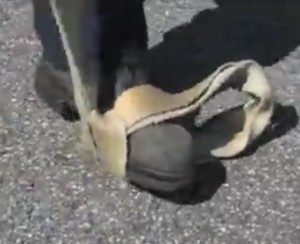 As the helicopter lifted the rig, [a worker’s] leg became entangled in a tag line. He was lifted some distance before the helicopter pilot became aware of the situation. 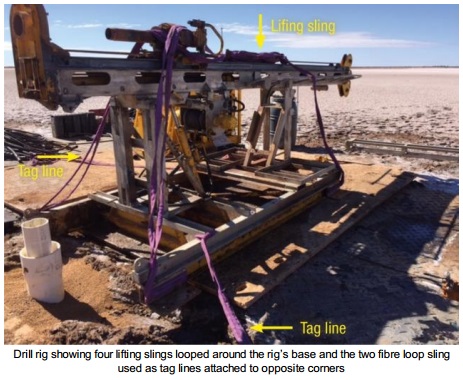 The worker fell 5 to 10 metres to the ground, injuring his back. UPDATE 25 November 2016: The Australian Transport Safety Bureau (ATSB) have issued their report:

The ground team for the removal of the equipment consisted of a load master and a driller’s offsider. The driller’s offsider involved in the operation was new to the role. For the operation, the offisider’s role included ground support and to sling equipment under the guidance of the load master. The load master was to guide the helicopter using hand signals and a two way radio to communicate with the helicopter pilot.

The pilot of an Aerospatiale Industries [sic] AS350 helicopter, registered VH-BII, worked with the ground crew to move three mats and a power pack to a new site, before returning to move the rig.

The load master and offsider attached the rig to the hook under the helicopter and attached two tag lines – 6 m loop slings, to the load on separate corners. At about 1040, in readiness to lift the rig, the load master advised the pilot using hand signals that the load was attached and that they were clear and ready for the lift. The helicopter climbed and the rig lifted a few centimetres above the ground.

The load swivelled as it lifted off the ground, and pushed against a PVC pipe protruding from a bore hole. The load master and offsider stepped in closer to manoeuvre the rig clear of the pipe. The pilot observed the ground crew then step away from the rig. As they stepped back, the offsider had inadvertently stepped into the loop of the tag line. As the helicopter lifted the rig, the tag line went taught, and the offsider’s leg was ensnared in the loop. The offsider was lifted off the ground by the leg and the helicopter began lifting the load.

The ground crew operations company has advised the ATSB that they have taken the following safety actions:

This incident highlights the importance of conducting a thorough risk analysis prior to commencing operations. The risk assessment should clearly identify hazards and introduce measures that mitigate any associated risks. In addition, it is important to consider possible emergency scenarios and develop procedures to follow in the event of an abnormal situation developing. Appropriate training is essential for personnel working in complex operations. In addition to individual roles and skills, training should include how team members work together to maintain and improve safety. Part of working together safely involves effective communication and a mutual understanding of phrases and signals.

Ground crew member knocked off vehicle while attempting to control a gravel bucket about to be disconnected from hovering helicopter. End of the working day, pack away at helicopter load site. The incident activity occurred when lifting one of two 80kg gravel buckets from the ground onto the deck of the Toyota Land Cruiser for transport back to base. 1 of 2 ground crew attending intervened to control the bucket grabbing the base tube. The pilot made a split-second decision to lift the bucket clear of the vehicle to avoid damaging the vehicle. The ground crew held onto the bucket as it was lifted approximately 3.6m into the air. The pilot could not see the ground crew suspended directly beneath the bucket due to the diameter of the bucket. The suspended ground crew released his grip on the bucket and landed on the roof of the land cruiser, over balanced and fell to the ground. The injured ground person was walking around after the incident but said his hip and shoulder were sore. It was decided as a priority to get the injured crewman to hospital to confirm the extent of the injuries, the crew person was flown back to Whangarei Airport and transported to hospital. The ground crew person suffered a fractured scapular and pelvis which could require 6 weeks recovery time.

UPDATE 10 March 2020: ATSB report on an accident where a 1.2t load unexpectedly fell from Bell 205 helicopter VH-HUE, striking and seriously injuring a worker on the ground.

In the course of investigating the incident, the ATSB examined the slings, shackle and hook, but could not determine the reason for the load being released from the hook. However, the ATSB found that the ground personnel had not been maintaining a safe distance from the load.  ATSB Director Transport Safety Stuart Macleod said: “Unexpected events can occur, and ground personnel should take care to ensure they maintain their separation from external slung loads that are above head height.”