The Irish Air Accident Investigation Unit (AAIU) have reported on a serious incident involving Aer Arann (now Stobart Air) ATR72-212A, EI-REL on 2 January 2014.  The findings are highly relevant not only to fixed wing aircraft operating at moderate altitudes over the sea but also offshore helicopter operators. The ATR72…

….carried out a go-around from its first approach to Runway (RWY) 25 at Cork Airport (EICK) in stormy weather, due to a significant increase in indicated airspeed on short final. The aircraft then positioned under radar control for a second approach to the same runway. Its track brought it south of EICK, close to the coast and at times over the sea. During this time, a thick layer of sea salt formed on the front windscreens, obscuring the Flight Crew’s forward visibility. As it was not possible to acquire the necessary visual references for landing, a second go-around was flown.

…the Flight Crew showed good airmanship and crew resource management (CRM) in seeking to fly to areas of shower activity which were visible on their weather radar. They were facilitated in this by ATC and they found areas of moisture which, although not active enough to completely clear the windscreen, did clear a small area of the windscreen on the Commander’s side. The Commander was then able to commence a third approach to RWY 25, using the visual cues which she could see through this small gap in the salt residue. At the time, the First Officer still had no visual reference. As they approached EICK, a shower passed over the airport, which assisted in clearing the windscreen and they were able to carry out a normal landing.

The ATR72 has windscreen wipers but no wash system.
The AAIU report that further inquires:

… revealed an occurrence in 2007 in which a NOAA Lockheed WP-3D turboprop aircraft involved in the study of near-surface wind speeds over the North Atlantic Ocean some 500 nautical miles (nm) east of St John’s, Newfoundland lost power on three of its four engines. 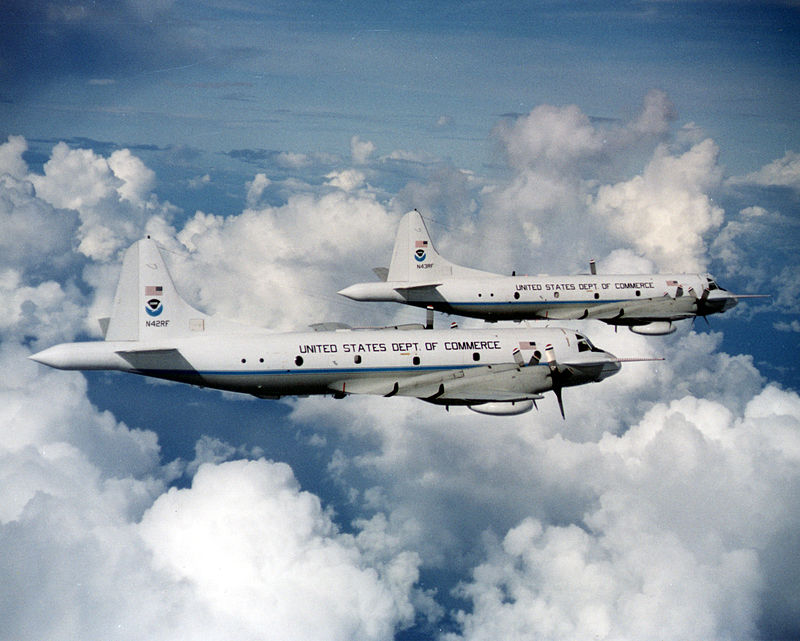 The aircraft was operating primarily at altitudes of around 2,500 – 3,000 ft in very high wind speeds (85 to 95 kts) in the on-station area. As the aircraft was unable to maintain altitude on the power of only one engine, it began a descent at a rate of about 700 feet per minute. The crew carried out the restart procedure for the No. 1 engine, at which time the aircraft passed through an area of liquid precipitation for less than 60 seconds. The engine restart was successful and subsequently the crew were able to restart No. 3 and No. 4 engines and the aircraft recovered safely to St. John’s. An investigation report published by NOAA (Mishap Investigation Report 01-07) found that salt accretion on the compressor stator and rotor vanes of the engines during the incident flight was considered a causal factor in this occurrence. It is noteworthy that the Report mentions the fact that, on landing, the crew had “very limited visibility through the windshield.”

There is very little collected data on sea salt aerosol particles in high wind conditions, and much of the data at moderate wind speeds is suspect… …the primary causal factors for the environmental conditions experienced are determined to be a lack of wet scavenging by precipitation, and high surface marine winds. …high winds (>50 kts; especially >60 kts) with little precipitation can result in high concentrations of airborne sea salt particles. Even under more benign conditions, giant mode particles [diameter > 15 μm] can reach 800 m [2,625 ft]. Under the worst of conditions, sea salt particles of this size can probably reach ~1.5 km [approximately 5,000 ft]. …the high-wind, dry, cold sector behind a front or southwest of an occluded system appears to be the most dangerous region in the storm for sea salt fouling.”

NOAA noted that precipitation is effective at removing salt particles from the atmosphere and that dangerous concentrations of sea salt aerosol are not anticipated above 5,000 ft, due to dilution and settling. This still means the potential for high levels of sea salt at offshore helicopter altitudes. The AAIU report that after the ATR72 incident:

…the Operator issued a Flight Crew Instruction (FCI) on Sea Salt Aerosol Accretion. This FCI contains general information on the generation of sea salt contamination, similar to the information contained in this Report. It reminds crews that, in the event of experiencing contamination leading to degradation of visibility through the windscreen of an aircraft, it may be necessary to fly through precipitation prior to conducting a landing. The Investigation reminds operators that, in the event of an aircraft operating in areas of high concentrations of sea salt aerosol, particular attention should be paid to the washing of engines and airframe as a corrosion prevention measure.