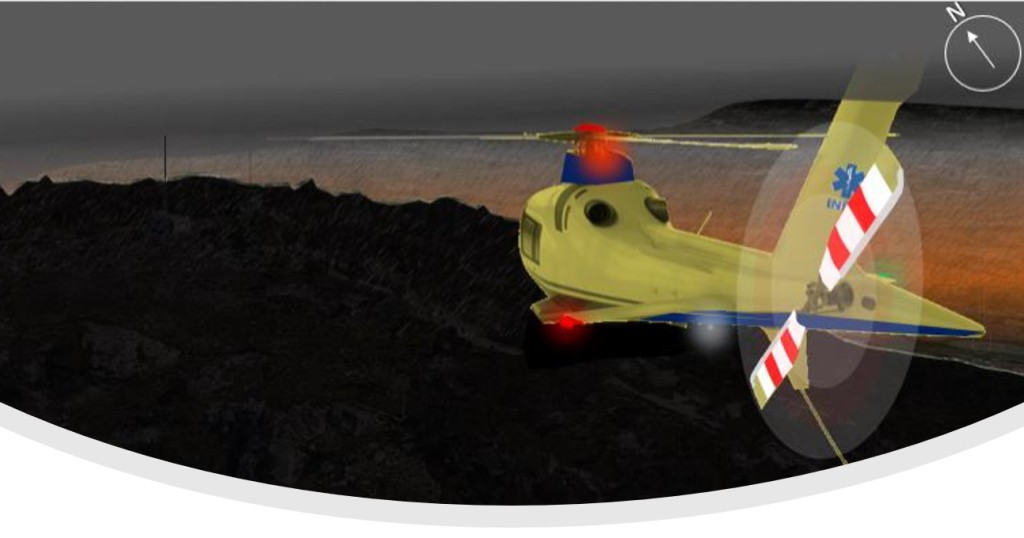 The HEMS air ambulance helicopter was operated under a 5 year, 4 base 24/7 contract for the the National Institute of Medical Emergency (INEM), awarded in June 2018.  It was en route, returning from an urgent inter-hospital patient transfer that afternoon.  On board were two pilots and two medical passengers.  All died in the accident. 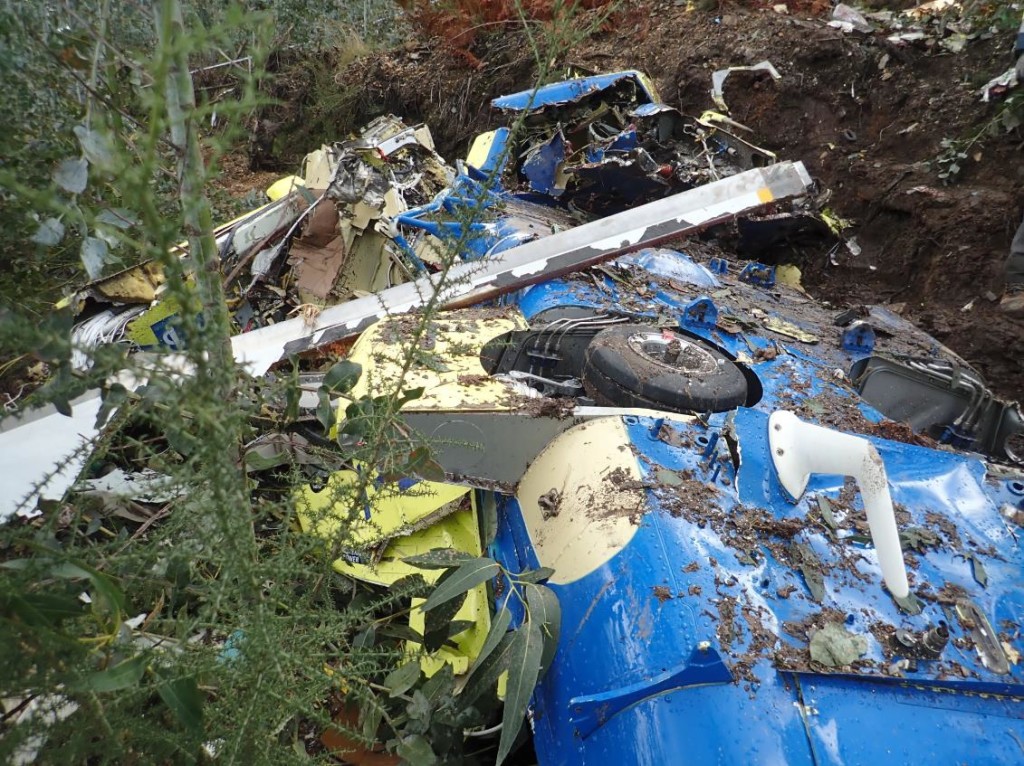 In their safety investigation report, issued 6 March 2020, the Portuguese accident investigators GPIAAF (Gabinete de Prevenção e Investigação de Acidentes com Aeronaves e Acidentes Ferroviários / Office for the Prevention and Investigation of Accidents in Civil Aviation and Rail) explain that after the successful inter-hospital transfer the crew initially retired to a coffee shop to wait out the poor local weather (rain and low cloud).  The crew made several phone calls related to the weather.  Witness testimony was the Commander was comfortable with an IFR diversion and night-stop at Porto International Airport if required.

Subsequently the helicopter departed Massarelos heliport, at 18:35 UTC, heading to refuel at Paredes-Baltar heliport before returning to its base at Macedo de Cavaleiros heliport.  None of these sites had navigation aids or meteorological data.  Although not used, Porto International Airport’s navaids were operational.

According to secondary radar data provided by the air navigation service provider, after take-off, the aircraft proceeded with a direct heading to the Paredes-Baltar heliport, flying at a cruising speed of around 130 kt and at altitudes oscillating between 1400 ft and 1500 ft. 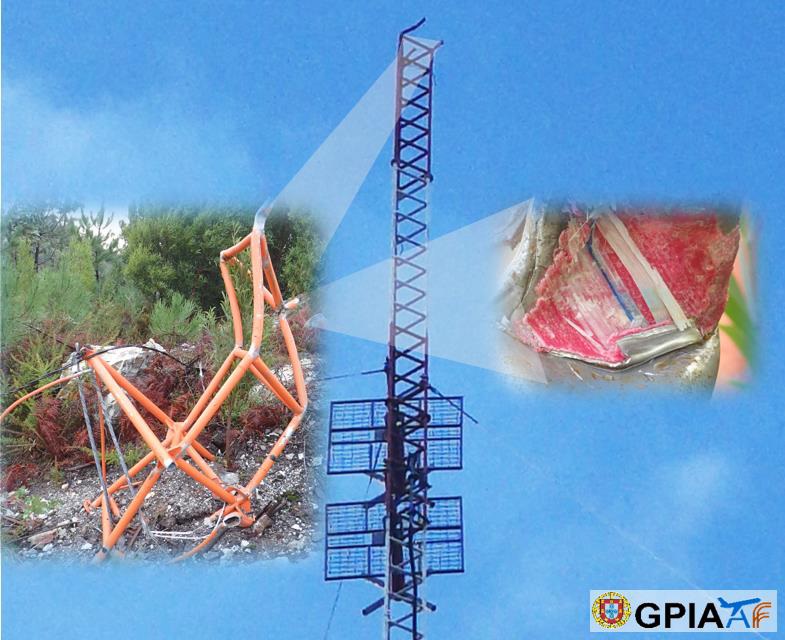 It was not possible to confirm if this beacon was operating on the accident night. [Note a lower adjacent deactivated mast was unlit.] 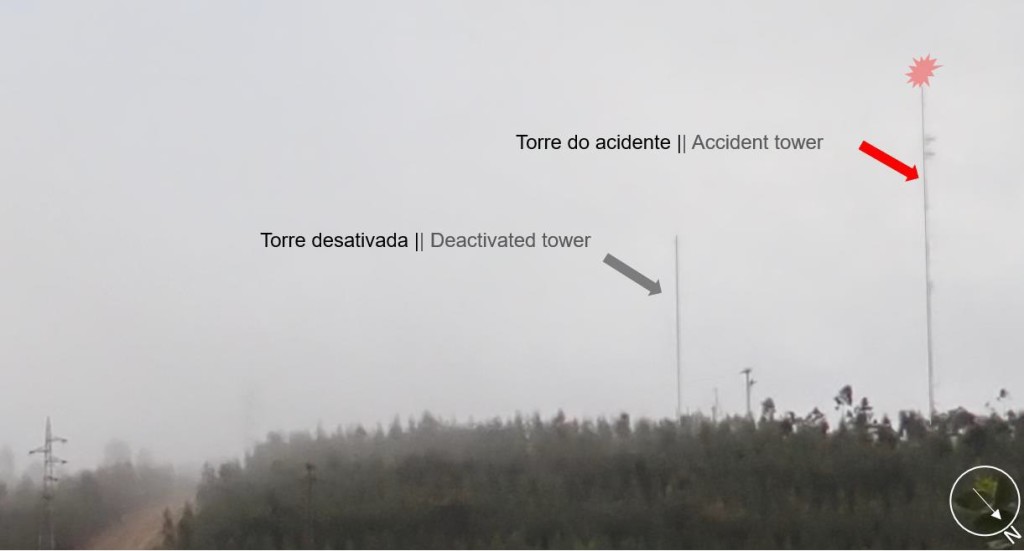 This tower (marked ‘1’ below) was actually one of 10 obstacles along the ridge line. 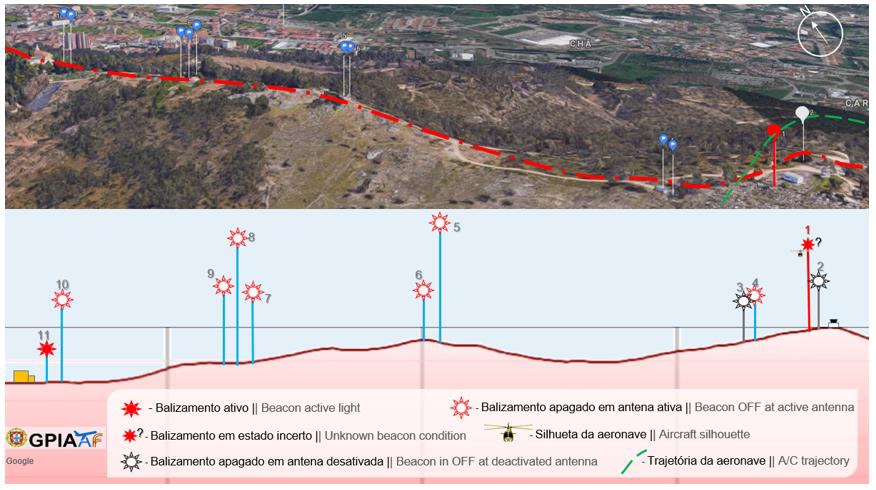 However only those 200 ft (60 m) above ground level were marked, with only those over 328 ft (100 m) listed in the AIP.  The investigation subsequently identified that some of the obstacles were unlit. 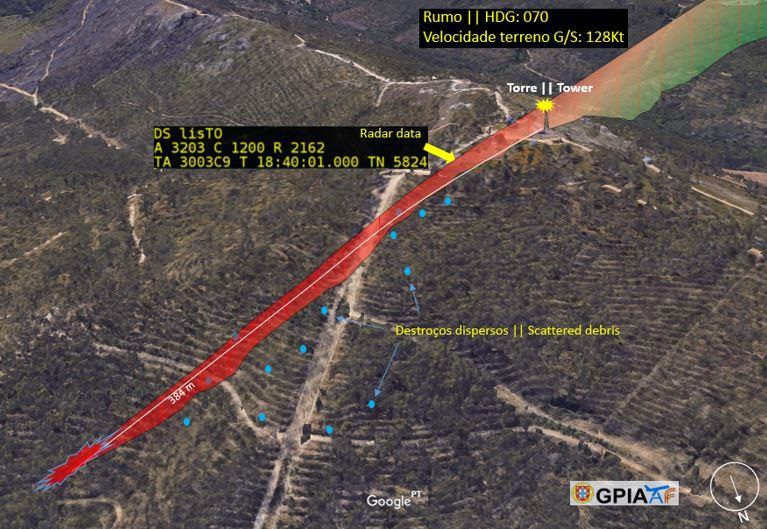 In relation to emergency response:

After the aircraft hit the ground, the Emergency Locator Transmitter (ELT) signal was activated, however, it was not received by the COSPAS/SARSAT satellites, as the system lost the antenna.

In accordance with the existing contract for the HEMS service provision…the operator should have installed an aircraft tracking system that would allow the contractor to follow up the performed missions in real time. This system was not installed on the aircraft by the operator or verified by the contract [holder].

Consequently, lacking an accurate fix on the aircraft an extensive search was required.

A risk analysis of the HEMS operation service in Portugal and its limitations was not [produced] by the operator or required by the [customer], especially in the northern part of the country and on the usual routes, where evidence suggests that it is followed a typical low altitude flight profile, in some cases below the minimum altitude values imposed by the regulation, and frequently in adverse weather conditions.

Such mitigation measures that may be considered are the use of night vision equipment as provided in Part SPO NVIS Subpart H (Helicopter Operation) night vision equipment), the use of performance-based-navigation (PBN) solutions with points-in-space (PinS), combined GPS navigation and integrated Global and European Air Navigation Strategy (EGNOS) solutions or, simply installing and certify weather stations on high frequency heliports, or other actions considered to be appropriate.

In the absence of met data at the service’s bases and hospital heliports, crews had been telephoning individuals who were not qualified met observers for information.  GPIAAF’s analysis of past flights indicated that “weather minimums were not always respected, as was the case of the accident flight”.

VFR flight may be permitted at night and is known as Night VFR. This is generally permitted only under more restrictive conditions, such as maintaining the referred minimum flight altitudes. These flight restrictions have the main purpose to ensure the terrain clearance.

The boundary criteria between IMC and VMC are known as the VMC minima and [in this case were]:

The pilot of the crash flight was described by his colleagues as a competent professional, very experienced and knowledgeable of the operation and constraints of the area, with a high mission spirit. The co-pilot, with significantly less experience, would have easily followed the pilot decisions…

The weather was analysed by after-cast as:

Once in the cruise, the Aircraft Commander was…

…not maintaining the minimum regulatory safety altitude to the terrain and….fluctuating the altitude maintaining/seeking the visual cues.

The close direct route to Paredes-Baltar and the high speed at which the aircraft was flying, suggests a high confidence for the ground clearance, even under minimal conditions.

As illustrated in the figure above, the crew would have understood that the separation of the terrain was guaranteed and that the mountain and main obstacle, would be overcome without difficulty, since they had in the background scattered light from the Campo village, A4/A41 motorway illumination, etc., where the mountains profile ridge appeared well defined.

It is likely that the [Terrain Awareness and Warning System (TAWS) fitted – within a Garmin GNS 530] had conditions to trigger an alert to the crew about terrain proximity, however, it was not possible to determine whether or not these warnings were inhibited.

Inhibiting TAWS alerts when operating at low level to suppress frequent nuisance warnings is common, however the TAWS function within the GNS 530 was, at least initially, deactivated because according to GPIAAF…

The investigators imply the functionality was re-activated and certainly the Installation Manual (p7-2) does not preclude specific STCs for TAWS activation on rotorcraft.  Also:

It is likely that the aircraft’s navigation system database was not up to date, however, was not a factor to the accident.

GPIAAF expressed concern at the limited corporate support for flight crew in decision making (“including, but not limited to, lack of reliable weather information”) and in oversight of crew schedules (which were managed locally at each base by the crews themselves).  They also note that:

Regulation EU 965/2012, in its Annex V, part-SPA subpart J, states in SPA.HEMS.140 Information and documentation: (b) Relevant extracts from the operations manual shall be made available to the organisation for which the HEMS is being provided.

The operator must thus ensure that the [customer] has access to information and operation data, risks and mitigation actions on the contracted service. The investigation found that the [customer] up to the accident date did not have or requested such information from the operator, but only received generic contractual aspects data of the operation regarding the four bases and with limited information such as hours flown and occasional problems in the resource’s availability.

They observe that the customer had not audited or inspected their contractor even though the contract stated:

INEM will carry out a quantitative and qualitative inspection…

In their comments on the draft accident report, ANAC (the National Civil Aviation Authority) informed the investigators “that in 2019 the operator was subjected to increased supervision”.  However:

The accident was caused by:

From the carried-out investigation, it is clear that the crew actions had latent conditions and causes related to the HEMS service organization and operation.

On complex environments, opportunities exist for short cuts and other ways of doing things that seem to be “a better way”, or at least, a way that just works when facing certain constraint.

In…medical emergency environments where life and death decisions are dealt with daily, the operator, the [customer] and the regulator have the duty and obligation to put the appropriate safety barriers to these shortcuts [in place].

…the safety of HEMS activity must result from a properly articulated action among all involved organizations, in order to establish the necessary conditions for risk control on the operation and to avoid that all decision-making process responsibility regarding safety, is put on the crews shoulders