A minor landing gear incident on a CHC Sikorsky S-92A at Aberdeen Airport in Scotland has attracted press interest. In low hover with NLG up (Credit: unknown)

The Nose Landing Gear could not be lowered resulting in the need for maintenance intervention while the aircraft was in a low hover with 16 passengers and two crew aboard.  Photographs were posted on an oil workers Facebook page. 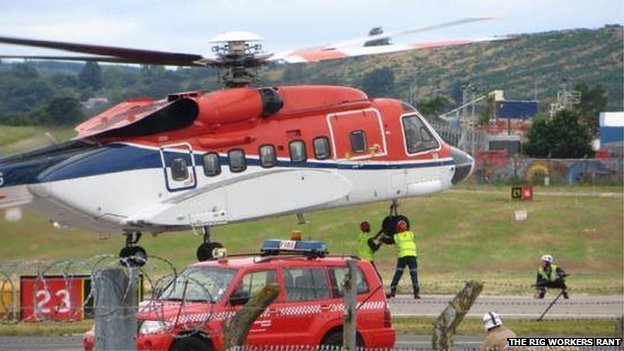 Maintenance in the hover (Credit: unknown)

One nice positive is that the local press do highlight that the successful efforts of CHC’s maintenance team did get recognised:

Users of the social networking site were quick to praise the workers.

One commented: “Fair play to the lads that got under and sorted the landing gear! Good effort boys.”

On 24 January 2010, a CHC S-92A at Esbjerg in Denmark, OY-HKA suffered a NLG failure.  The Danish Havarikommissionen accident investigators explain in their report that the NLG should self centre when unloaded but this can fail to occur if their is too little hydraulic fluid within the strut (due to a leak for example) or the nitrogen pressure is too high. In the Esbjerg incident, which occurred at night, the aircraft landed on a pallet of bags of salt. The investigators say that:

As a result of this incident and their investigations, the helicopter manufacturer has changed service procedure in their maintenance manual AMM (Aircraft Maintenance Manual).

The operator’s maintenance organization has informed the Havarikommission that they subsequently have reduced service interval from 500 flight hours to 250 flight hours based on the incident.

The effectiveness of the actions are suspect following the UK occurrence.

The passengers and crew aboard these two S-92As are not the only people to have a helicopter landing gear failure disrupt their arrival.  In May 2008 David Cameron, later British Prime Minister, had to jump from a helicopter at Redhill Aerodrome, before the pilot landed on a bed of car tyres.  The UK Air Accidents Investigation Branch (AAIB) reported on that incident in 2010.  In that case, with an Agusta A109, it is believed that misassembly of the landing gear selector was responsible.

During a final approach to land at Scatsta the NLG failed to extend despite being recycled and the use of the emergency blowdown system. The crew declared a PAN and the decision was taken for ground crew to lever the NLG down manually. This was successfully carried out and the helicopter landed safely. It was found that the automatic nosewheel self-centring mechanism had not operated, causing the nosewheels to jam the nose leg in its bay. The exact cause of the failure of the NLG to centre the nosewheels during retraction could not be determined.

The helicopter manufacturer has investigated six reports of previous events where the NLG was off-centre, jammed in the wheel well and failed to extend either by the primary or secondary means.

…low oil or nitrogen charge in the strut results in the self-centring cams not interlocking correctly, allowing the wheels to remain off-centre when the aircraft weight is ‘off-wheels’ prior to retraction.

In September 2017 the manufacturer issued a letter to operators highlighting this potential problem and the importance of correct fluid quantity and gas charge in the NLG.

UPDATE 11 July 2019: The AAIB release their investigation in to the NLG gear collapse of Airbus Helicopters H175 G-EMEA, due to the misassembly of the nose landing gear A-frame, at Aberdeen Airport, 10 July 2018.

Aerossurance is an Aberdeen based aviation consultancy with extensive experience in aviation safety and airworthiness.  To discuss how we can help your business, contact: enquiries@aerossurance.com