The Transportation Safety Board (TSB) have reported on an unusual helicopter accident in Alberta, Canada on 27 January 2013, that has important lessons on pilot supervision, flight following and emergency location.

Robinson R44 C-GOCM was operated by Gemini Helicopters, headquartered at Grande Prairie, Alberta, who operated a fleet of 20 helicopters for charter and to support ‘production services’.  ‘Production services’  means providing flying production operatives to tend to dispersed oil wells and pipelines.  In April 2013 Gemini Helicopters bought Airborne Energy Solutions from Nabors Canada and saw its fleet expand to 67 aircraft. The new company traded as OpsMobile at the time this article was written.  Gemini had previously had a non-fatal R44 accident about a year earlier (C-FGBX).

The pilot on the day of the accident was in his mid 30s and TSB reports he had been employed by the Company since May 2011, and had approximately 2200 hours of flying time, with 2100 hours on the R44.

Flights on the Afternoon of the Accident

Early in the afternoon of 27 January 2013 the helicopter lefts its base at the Horse Facility gas plant camp and made a couple of flights to production facilities then according to the TSB:

…then at 1450, the helicopter made an unauthorized flight to a roadside security gate. After 3 approaches, the helicopter landed at 1510. At 1545, the pilot was observed to be staggering and smelling of alcohol. On being questioned, the pilot uttered some derogatory remarks.

It departed at 1611, and was flown low along the Berland River before landing and shutting down at a remote cabin at 1630.

Forty-eight minutes later, at 1718, the helicopter lifted off and flew to the location of the security gate, where it made several low passes and turns. The aircraft landed at the gate at 1731, and the passenger disembarked 2 minutes later. 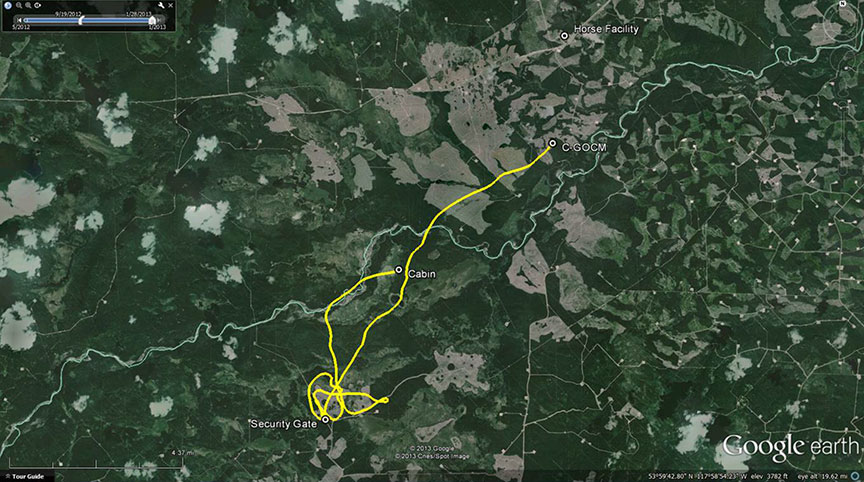 The helicopter took off at 1735 and was observed to be flying erratically during departure. It broke up in flight over a wooded area 5 minutes later.

TSB found nothing to indicate airframe failure or system malfunction prior to the in-flight breakup.  They considered the main rotor blade damage found was consistent with the pilot manipulating the flight controls such that a main rotor blade struck the right side of the cabin.  TSB also note the aircraft was fitted with a bubble window under a Supplemental Type Certificate which introduced a never-exceed speed (VNE) limit of 100 knots. Analysis shows the aircraft was flying at up to 126 knots. 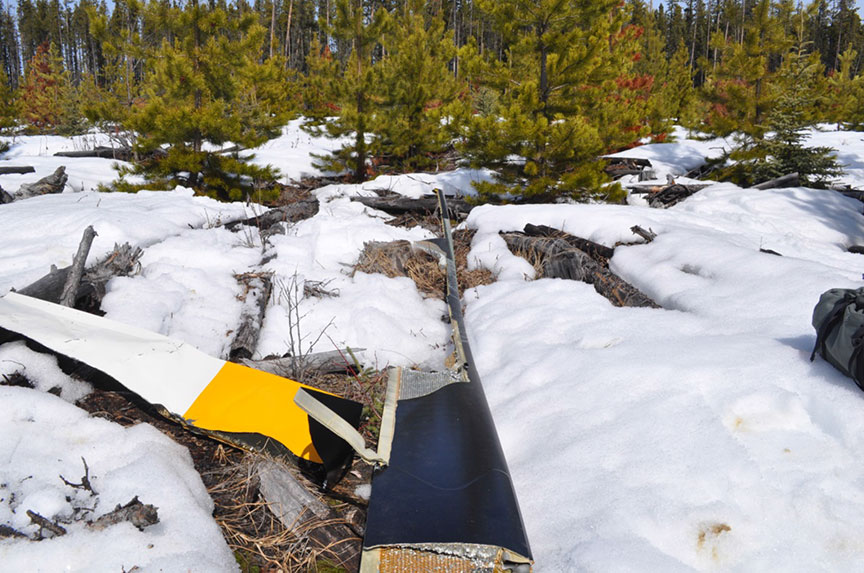 As mentioned above, witnesses reported seeing the pilot acting in an erratic way and smelling of alcohol, though no apparent attempt was made to intervene. TSB did establish that the evening before, the pilot had left the camp and “to pick up a case of beer”.  It is believed he consumed “3 or 4 beers” that evening.  TSB were not able to conclusively identify if the pilot consumed any further alcohol that night or on the day of the accident.  An empty wine bottle and an empty liquor bottle were found at the cabin, where the pilot and passenger had spent 48 minutes shortly prior to the accident.

On the day of the accident, many aspects of the pilot’s flight planning, flying technique, and decision making were inconsistent with regulatory and administrative requirements, with the company operations manual, and with safe flying practices. These aspects included not filing a flight plan or flight itinerary, making unauthorized flights with an unauthorized passenger, exceeding allowed flight parameters, and consuming alcohol when piloting an aircraft.

The quantity of ethanol in the pilot’s system was over the [Canadian] limit of zero for piloting an aircraft [sic: CAR Subpart 602.03, quoted in the report, does not strictly say zero], and over 4 times the [Canadian] legal limit for driving an automobile. This amount of alcohol was more than sufficient to cause major impairment of judgment and performance.

TSB make no mention of any interview with the passenger who was aboard shortly before the accident.

The TSB don’t offer any further background on the pilot’s personal circumstances.

While this type of causal factor is rare in commercial air transport, this is not the only recent case were alcohol has featured in a helicopter accident.  Aerossurance recently reported on an accident in Norway where alcohol is believed to have been a factor.

Supervision is a challenge with remote operations and operators need suitable procedures in place.  The TSB report that the operator:

…has developed and implemented a daily flight risk-assessment document that is used by the operations and dispatch departments. The company has also put in place daily morning conference calls involving a member of the management team and all operations personnel to determine operational considerations for the day. This management team member authorizes each flight [sic] for every aircraft on a daily basis.

The challenge of detecting abnormal mental states in time to intervene remains unaddressed, partly no doubt because of the immense difficult of doing so.

The Gemini fleet were, very sensibly as they operate in remote regions, equipped with a satellite tracking system.  TSB say:

The pilot was responsible for filing a flight plan or a flight itinerary, which was not done. Gemini Helicopters had systems and procedures in place to monitor flights and provide alerting services in the event of an accident or an overdue aircraft. These procedures could not be followed, as no itinerary was passed on to the flight follower or to any other responsible individual. As a result, the flight follower on duty was not aware of the flight, did not notice the email notification from the SkyTrac system, and did not bring up the satellite tracking notifications and position updates for C-GOCM.

As he had not been notified of the flight, the flight follower had focused on other, notified flights, and the area that C-GOCM was operating was not visible on his display. TSB go on:

The flight follower was a new, low-time company pilot and was not properly trained in accordance with the company operations manual. These circumstances compromised any benefits that satellite tracking technology afforded.

As a result, when the accident occurred, no flight following was taking place, and the company was not aware that the helicopter was overdue.

Personnel at the Horse Facility called the operator at 1927, to report the aircraft missing, almost two hours after it was seen departing ‘erratically’ from the security gate.  Aerossurance has previously highlighted an accident off Ghana, where there was apparently a delayed notification of a missing aircraft.

The wreckage was ultimately found by search aircraft the next morning using the last SkyTrac position.

This accident, highlights the importance of a rigorous flight following process.  TSB report that the operator:

…has made amendments to its company operations manual and its flight following procedures. It now has dedicated staff for the latter function.

No 406 MHz signal was picked up from the helicopter’s emergency locator transmitter (ELT) by search and rescue satellites and only a faint 121.5MHz was apparent to search aircraft when overhead.  The ELT, an Artex model ME406HM, had activated and remained connected to its antenna, however the Velcro (aka ‘hook and loop’) retention straps had failed so consequently the unit had been damaged.  TSB Laboratory examination concluded that:

The latest Technical Standards Order for ELTs, TSO–C126b, issued in November 2012, states that …

…the use of hook and loop fasteners is not an acceptable means of attachment in complying with the Crash Safety requirements of section 2.2.5 of RTCA/DO-204A for automatic fixed (AF) and automatic portable (AP) ELTs.

This change in the TSO, followed US National Transportation Safety Board (NTSB) recommendations in January 2011.  These followed a fatal accident on 9 August 2010, to DHC-3T airplane N455A, operated by Alaskan mobile phone service provider GCI Communication Corp, which flew into the ground near Aleknagik, Alaska.  As the NTSB describe in their accident report, had the ELT…

…remained attached to its mounting tray, it would not have become separated from its antenna, and its signals likely would have been detected soon after impact; as a result, rescue personnel would have received timely notification of the accident and its location and could have reached the survivors hours earlier, when the weather and daylight were more conducive for their evacuation.

The US Federal Aviation Administration (FAA) issued non-binding advice to ELT manufacturers in May 2012:

For ELT manufacturers who previously utilized hook and loop style fasteners for ELT retention, we recommend you include the following information in your ICA [Instructions for Continued Airworthiness]:

1. Instructions for properly securing the ELT during installation and reinstallation as well as a method to determine the appropriate tension of the hook and loop style fasteners.

2. Instructions for inspecting hook and loop style fasteners for wear, contamination, environmental degradation, or other effects to ensure they will continue to meet the requirements in the applicable TSO. Incorporating this inspection with the inspection required by 14 CFR § 91.207 is appropriate.

3. Replacement interval for the hook and loop style fasteners.

TSB do not comment on whether this advice had been followed in the case of this model of ELT.  However, as TSB note:

All existing installations that use the Velcro method of attachment may still be at risk of failure.

In the case of this model of ELT, customers can choose to upgrade their units:

ACR Electronics, the manufacturer of the Artex emergency locator transmitter (ELT) model ME406HM, has produced a modified ELT mounting plate (part no. 8303.1), which is certified to TSO-C126b. The Velcro retaining straps have been replaced with metal, and these new backing plates can be used with previously certified ME406HM models certified under the previous technical standard order (TSO).

Fixed wing ELT failures were discussed in this Australian Transport Safety Bureau (ATSB): A review of the effectiveness of emergency locator transmitters in aviation accidents

Pilots and operators of general aviation and low capacity aircraft need to be aware that a fixed fuselage mounted ELT cannot be relied upon to function in the types of accidents in which they were intended to be useful. The effectiveness of ELTs in increasing occupant safety and assisting SAR efforts may be enhanced by using a GPS-enabled ELT, using an ELT with a newer 3-axis g-switch, ensuring it is installed correctly, ensuring your beacon is registered with AMSA and pre-emptively activating the beacon if a forced landing or ditching is imminent. Additionally, carrying a personal locator beacon (PLB) in place of or as well as a fixed ELT will most likely only be beneficial to safety if it is carried on the person, rather than being fixed or stowed elsewhere in the aircraft.

UPDATE 13 March 2016: Germanwings: Psychiatry, Suicide and Safety  The BEA report sheds light on the complexities of addressing pilot mental health issues. We look at the lessons.

Aerossurance is an Aberdeen based aviation consultancy with extensive expertise in helicopter safety management and contracting for aviation services.  For aviation advice you can trust, contact us at: enquiries@aerossurance.com