On 11 August 2014, a Hughes 269C helicopter, N7432F, impacted trees and a river bank in a steep ravine following a partial loss of engine power near Darrington, Washington. The pilot, a 59-year-old airline pilot, was uninjured. 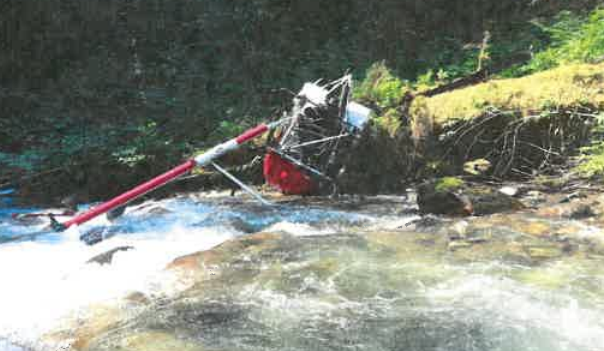 The pilot reported that during a flight in the rented helicopter he was descending out of 5,000 ft. As he approached 4,000 ft, he increased collective and noticed that the engine was slowing down; he was unable to recover the engine rpm to a normal range. The helicopter continued to descend until the pilot entered an autorotation. The helicopter impacted a tree about 30 ft high and then came to rest in a small stream.

The pilot stated he did not believe the engine ever quit, but the engine would not produce enough power to continue flight.

The aircraft was recovered and it was…

…found that the throttle mount bracket was hanging by the throttle cable linkage and was not secured to the servo mount studs as it should have been. This would prevent the loss of throttle movement for acceleration.

The operator [who leased the aircraft to the pilot] stated that the engine had just been installed into the helicopter 10 flight hours prior to the accident. [It had been removed from another aircraft in their fleet.]

We note that no further information is recorded in the NTSB report or public docket on the conduct of the maintenance, limiting the ability to understand the circumstances of any maintenance error and learn.

Maintenance personnel’s failure to secure the throttle mount bracket during a recent engine installation, which resulted in the loss of throttle movement and an inability to control engine power.