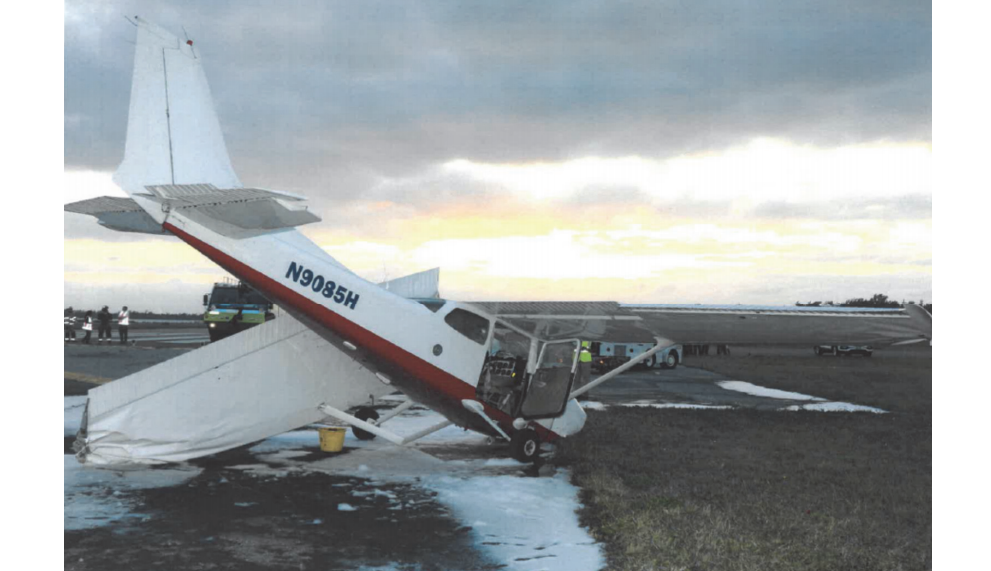 The flight was planned to consist of a number of circuits and landings to refamiliarise the pilot with the aircraft [after it] had undergone a prolonged maintenance input. As this was the aircraft’s first flight after maintenance, the pilot fully checked the flying controls and their range of movement during the pre-flight checks. On completion of the in-cockpit pre-flight checks, the pilot confirmed that the elevator trim was set to the correct position for takeoff by checking that the trim indicator was in the takeoff position. Shortly after takeoff the aircraft exhibited a tendency to pitch nose down despite the application of nose up trim. The pilot decided to terminate the flight… During the final approach, the pitch-down tendency increased to the point where the pilot was unable to maintain the glidepath. The aircraft struck the ground approximately 15 metres from the runway threshold.

The aircraft received significant damage and the pilot had minor injuries.

N9085H was operated and maintained by a Bermuda-based organisation, holding [Bermuda Civil Aviation Authority] BCAA approvals for the continued airworthiness and maintenance of several aircraft. Prior to the leasing of N9085H, the BCAA had requested changes to the aircraft’s maintenance program, which were implemented, but responsibility for airworthiness regulatory oversight remained with the [Federal Aviation Administration] FAA and the maintenance of the aircraft was carried out by two FAA-licensed engineers.

Given the pilot’s account, the investigators focussed on the aircraft’s flying controls.

No defects were found within the aileron, rudder or elevator control circuits or the range and freedom of control surface movement. Photographs of the aircraft, taken immediately after the accident showed the elevator trim tab in a position which corresponded to a nose down trim position.

The AAIB explain that:

The Cessna 172 is fitted with a moveable trim tab on the right elevator. The trim tab is used to ‘trim’ the aircraft and allow it to be flown at various attitudes with minimal pilot control force. 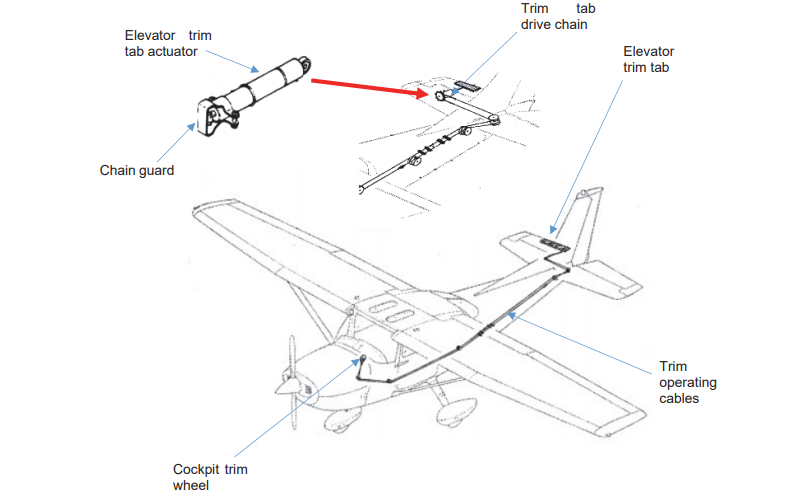 …the aircraft’s maintenance records showed that the aircraft had undergone a prolonged maintenance input…during which the elevators, rudder and horizontal and vertical stabilisers had been removed to allow replacement of the horizontal stabiliser’s forward spar. Interviews with the mechanics involved…confirmed that reference had been made to the [Aircraft Maintenance Manual] AMM, including the warning relating to the trim tab movement, when reinstalling the flying controls.

The maintenance organisation’s procedures for Bermuda-registered aircraft included a requirement to carry out duplicate inspections of all flight-critical components, including flying controls and trim systems, after any maintenance action.

The behaviour of the aircraft shortly after takeoff did not match the behaviour anticipated by the pilot. It has been demonstrated that such situations induce a significant increase in the pilot’s mental workload which greatly increases the time taken to assess the unexpected situation and carry out corrective actions. The pilot’s lack of recent flying experience in the aircraft, and the increase in physical workload, required to control the aircraft, would have compounded this effect.

The Bermuda-based maintenance organisation has introduced procedures to ensure that duplicate inspections of all flight critical systems are carried out, in line with its BCAA-approved maintenance procedures, on any aircraft that they operate or maintain, regardless of its State of Registration.

Sadly the AAIB choose not to make the obvious safety recommendation to the FAA, despite the large number of N registered aircraft operating in the UK (and here in an Overseas Territory).

We have previously discussed very similar cases here Misrigged Flying Controls: Fatal Maintenance Check Flight Accident, involving a more modern Piper PA-46-350P Malibu Mirage (N962DA) in 2015 and here Too Rushed to Check: Misrigged Flying Controls involving a Piper PA-12 (N3280M) in 2017.  We also wrote Crossed Cables: Colgan Air B1900D N240CJ Maintenance Error  In 2003 a B1900D crashed on take off after errors during flying control maintenance. We looked at the maintenance human factors safety lessons from this and another B1900 accident that year. We also discuss two cases were the normal sound airmanship of pre-flight ‘full and free’ control checks would have prevented an accident:

In 1992 the gust locks had not been fully disengaged on a third-party DHC-4T Turbine Caribou conversion, N400NC, leading to a horrific fatal accident that killed 3. https://youtu.be/YydkHy2P0dU We have previously written: 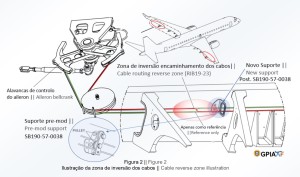 Aerossurance can provide practice guidance and specialist support to successfully implement a MOP. Aerossurance is pleased to be both sponsoring and presenting at a Royal Aeronautical Society (RAeS) Human Factors Group: Engineering seminar Maintenance Error: Are we learning? to be held on 9 May 2019 at Cranfield University. 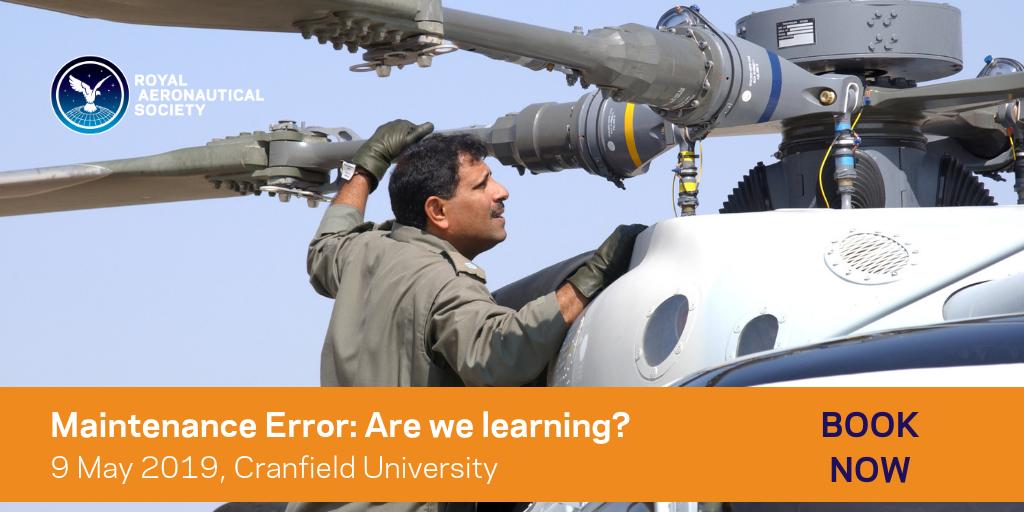