On 16 January 2012, Bell 214ST N5748M, crashed 7 miles south of Camp Bastion in Helmand province, Afghanistan, killing the crew of three. The helicopter was operated as a Part 135 flight by AAR Airlift Group under contract to the Department of Defense (DOD) Air Mobility Command (AMC), the air component of the US Transportation Command). 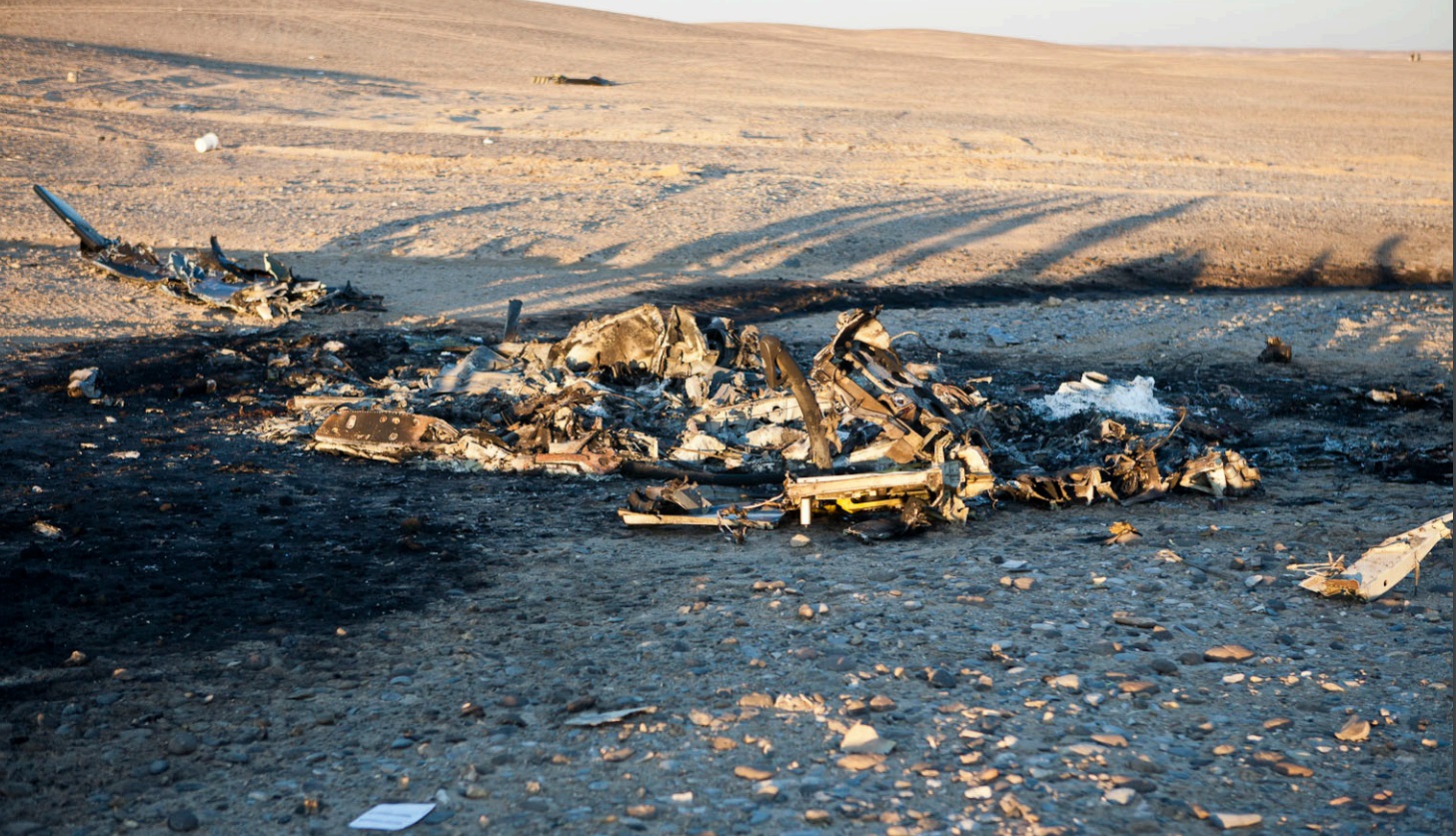 The helicopter, call sign ‘Slingshot 72’, was transporting military personnel between coalition bases with another 214ST (N391AL, ‘Slingshot 71’).  About 1040, both helicopters departed Camp Bastion after a rotors running turnaround for Shindand Air Base on their third sector of the day.  The only passengers were on Slingshot 71.  They climbed to a cruising altitude of 800 – 1,000 ft. Slingshot 72 was the lead helicopter, with Slingshot 71 trailing by about ¼ to ½ mile.

The US National Transportation Safety Board (NTSB), who were delegated the investigation by the Afghan Ministry of Transport and Civil Aviation, say in their safety investigation report:

The SIC of Slingshot 71, who was the pilot flying, saw Slingshot 72 enter a “sharp” bank to the right; he estimated that the bank was about 70º to 80º. The SIC then saw Slingshot 72 begin to “come apart.” …he flew Slingshot 71 to the left to avoid the large amount of debris coming from Slingshot 72, which included large pieces of structure.

The SIC reported that the tailboom of Slingshot 72 began to “separate and fold” and estimated that about two-thirds of the tailboom came off the helicopter. The SIC then saw Slingshot 72 pitch down about 75º to 80º, impact the ground, and burst into flames.

The accident site consisted of a primary impact area and a scattered debris field, which measured about 1,575 feet north-south by 656 feet east-west. 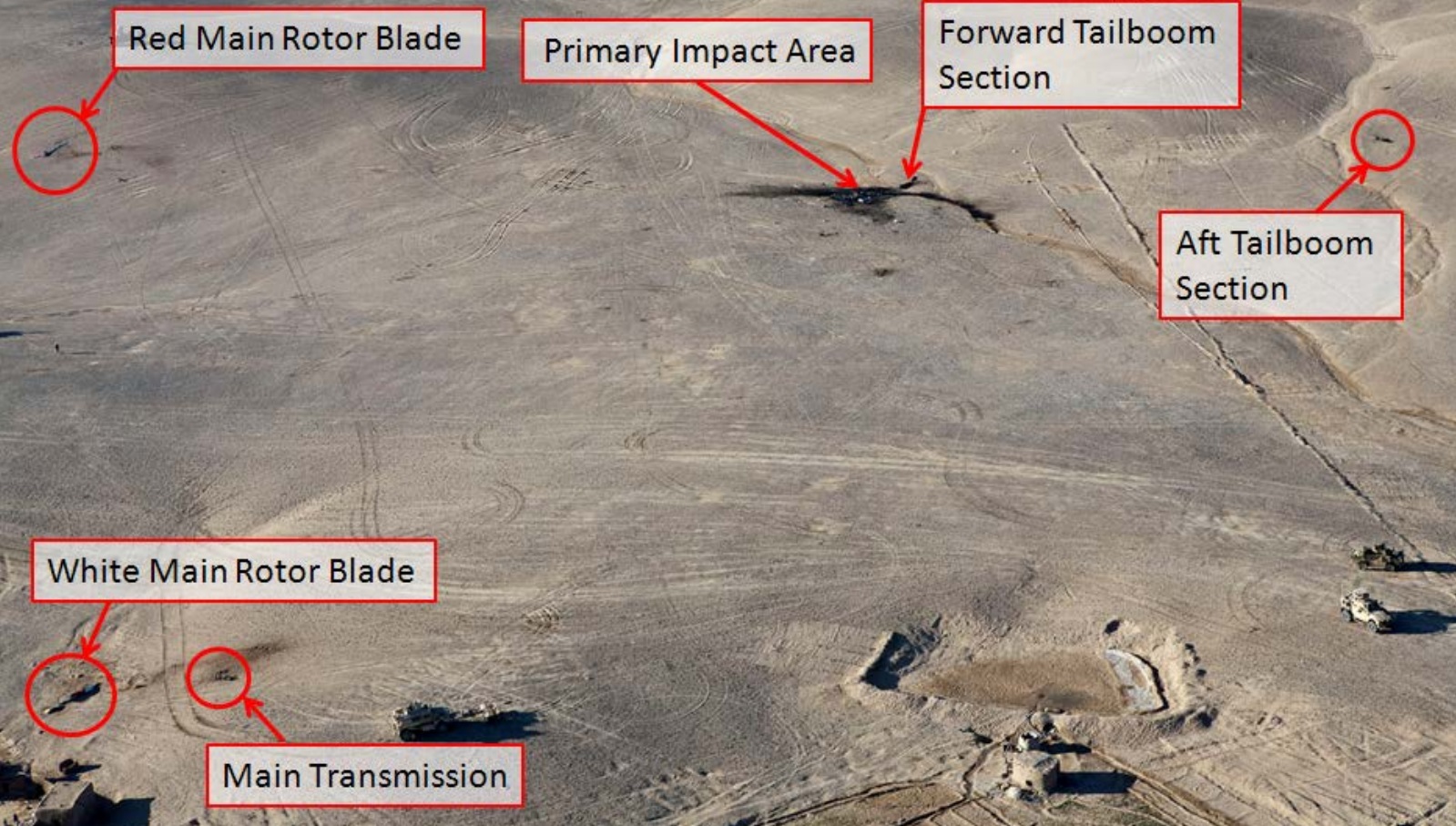 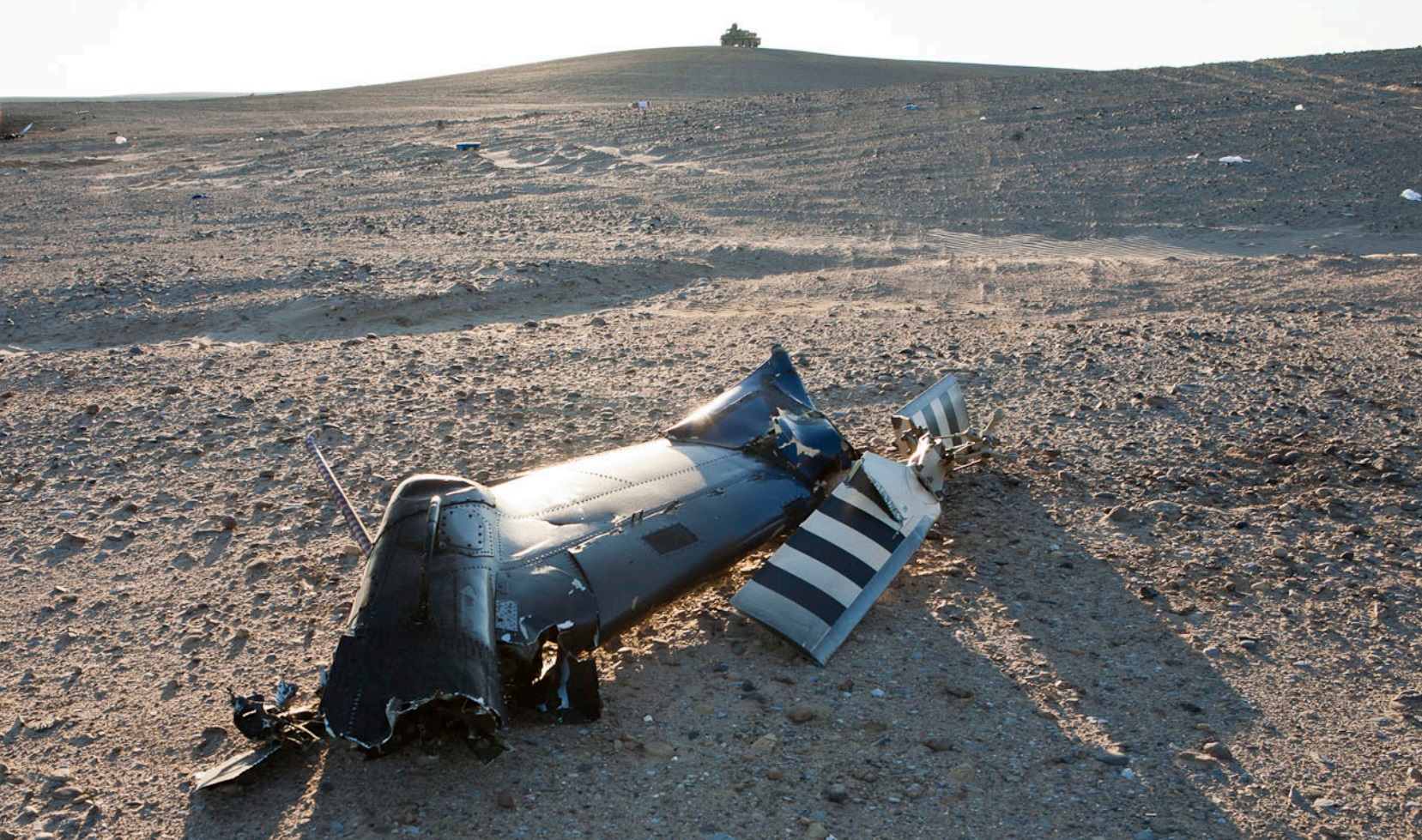 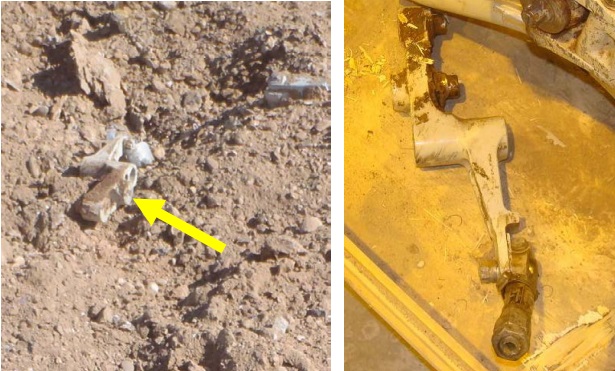 The Right Collective Lever as Found (Credit: DOD via NTSB) 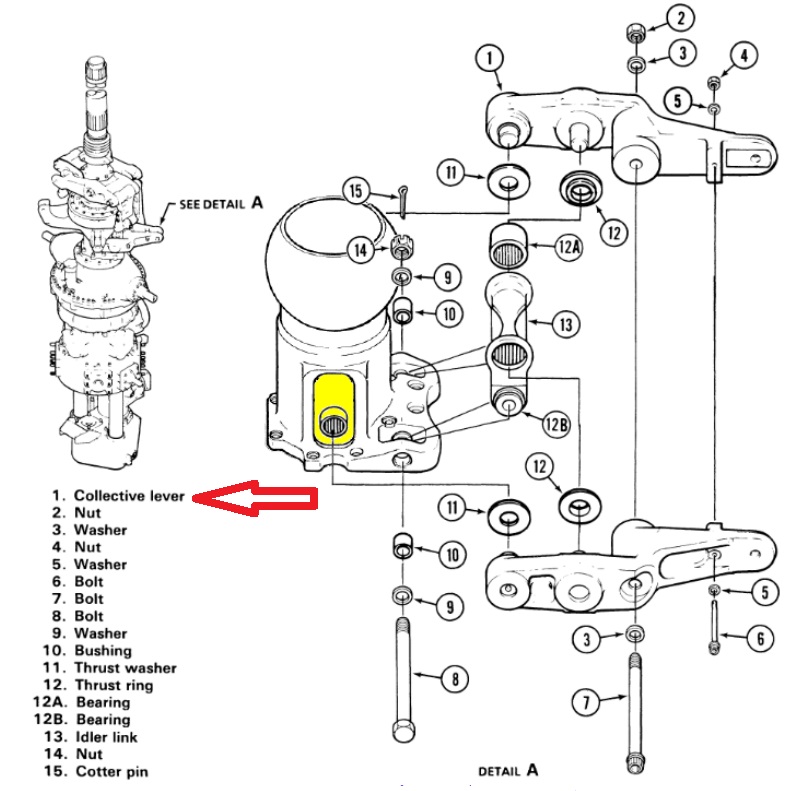 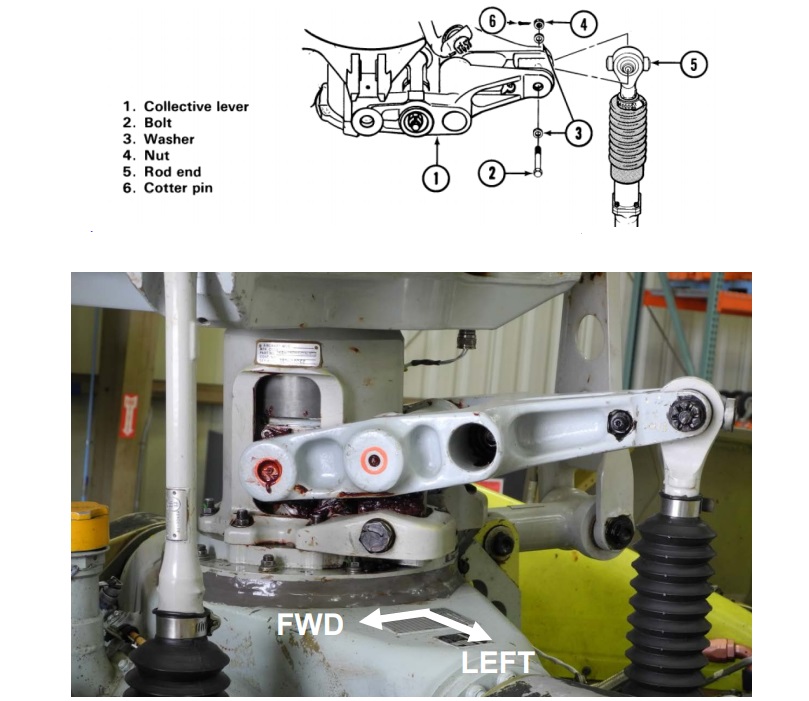 Also, the areas on the main transmission’s main rotor mast where the missing (left) collective lever arm was installed did not exhibit damage similar to the significant damage found in the areas where the right collective lever arm had been attached before the helicopter impacted the ground. Examination of the two holes for the bolts that secured the two collector lever arms together found no indications of hole enlargement or longitudinal wear marks on the inside of bolt holes.

Various impact marks were identified that, according to Bell, were “consistent with an overtravel of the collective lever arm in the direction of an upward movement of the collective sleeve”and mast bumping.  Mast bumping occurs on a two-bladed semi-rigid rotor when “when the system exceeds its teetering limit and strikes the mast of the helicopter with sufficient force to cause mast deformation and potentially mast failure”.

The results of the math model simulation were closely aligned with the witness accounts from the flight crew of the helicopter behind the accident helicopter and the damage observed on the helicopter wreckage. For example, the nose-down pitch and right roll observed in the math model simulation was similar to the reported pitch and roll of the accident helicopter when the accident sequence began. Also, the main rotor mast showed damage consistent with mast bumping that resulted when the main rotor hub significantly exceeded its flapping angle.

Thus, the evidence showed that, when the accident helicopter’s main rotor hub exceeded its flapping angle, the resulting loss of clearance between the main rotor system blades and the tailboom caused the main rotor blades to contact the tailboom. This contact was severe enough to cause the aft tailboom section to completely separate from the rest of the tailboom, leading to a loss of pitch control.

NTSB do note that:

The helicopter was equipped with a cockpit voice recorder (CVR), but that sustained substantial heat and impact damage and no data could be recovered. 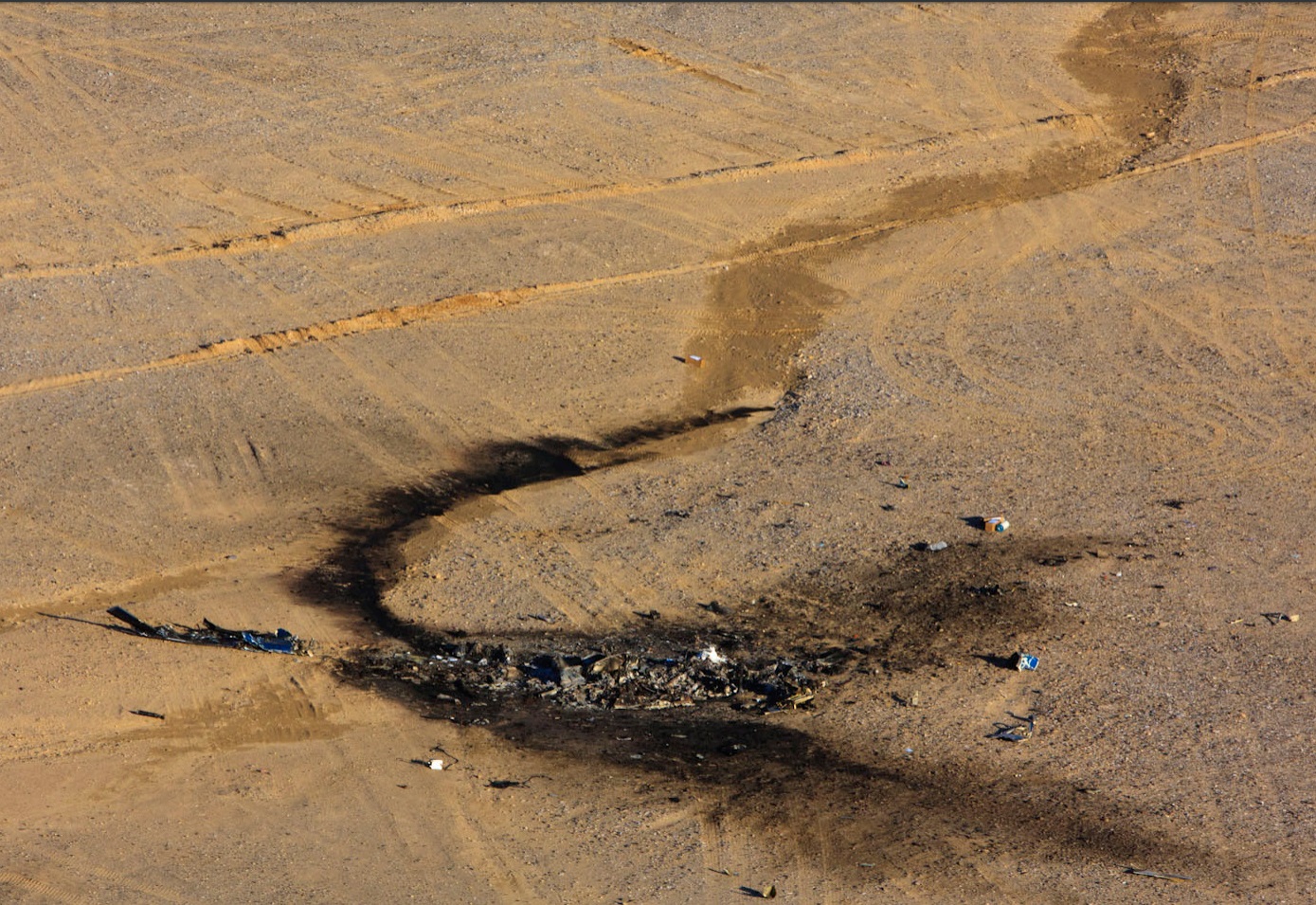 The overtravel of the collective sleeve, which led to a severe and sudden reduction in main rotor blade collective pitch, resulting in a loss of control of the helicopter.

The reason for the collective sleeve overtravel could not be determined since much of the collective control system was consumed in the post crash fire.

In September 2004 the company lost a CASA 212 (radio call sign Blackwater 61) in Afghanistan. N960BW flew into a mountain.  The two crew and the four passengers were killed, through one passenger survived for at least 8 hours, but died before help arrived. The NTSB reported that the probable cause was:

The captain’s inappropriate decision to fly a nonstandard route and his failure to maintain adequate terrain clearance, which resulted in the inflight collision with mountainous terrain.

Contributing to the death of one of the passengers was the operator’s lack of flight-locating procedures and its failure to adequately mitigate the limited communications capability at remote sites.

By allowing such deficiencies to remain uncorrected, neither the FAA nor the DoD provided adequate oversight of Presidential Airways’ operations in Afghanistan. The Safety Board is concerned that the remoteness of such operations presents unique oversight challenges that have not been adequately addressed for civilian contractors that provide air transportation services to the U.S. military overseas.

Xe was an American private military company founded in 1997 by former US Navy SEAL officer Erik Prince as Blackwater, renamed as Xe Services in 2009 and known as Academi since 2011.  AAR created its AAR Airlift Group on acquisition in 2010, which had:

When Presidential Airways was sold, the management personnel were changed by AAR Airlift.

…concerned personnel being forced to take flights into dangerous areas, complaints about Bell 214 parts, complaints about fuel [etc and] started shortly after the certificate was sold to AAR and key personnel were being replaced. The FAA Southern Region said all hot line complaints had to be answered and violations forwarded to the legal department.

So, as one FAA inspector commented:

At the time of the accident the FAA had yet to audit AAR’s deployed operations in Afghanistan.

…was conducted by an evaluator in Afghanistan who observed company operations, procedures, aircraft, and facilities. The evaluator was generally an operations specialist but was occasionally a maintenance specialist. DOD stated that it strived to conduct in-theater oversight twice a year (in 6-month intervals).

The NTSB’s review of the DOD’s operational reports and cockpit evaluations of the company from July 2010 to July 2011 (the company was known as Presidential Airways until January 1, 2011) showed satisfactory operations.

The last biennial on site survey of AAR was moved up to an earlier time due to “risk factors” that appeared. These risk factors included the company moving its headquarters after being sold to AAR Airlift, a “huge” management change including several positions that were changed several times, the aircraft fleet increasing in number, and a shared concern with the FAA that the Quality Assurance program was not meeting standards. The company had been under increased surveillance due to these risk factors. The company was subsequently put back under “normal surveillance”.

Between October 24 and 27, 2011, the DOD conducted a biennial survey of the company’s operations in Afghanistan. The NTSB’s review of the survey results indicated that all operational areas met the DOD quality and safety standards prescribed in Federal regulations.

On 6 September 2016 AAR’s Sikorsky S-61N, N805AR was destroyed during a post-maintenance check flight after experiencing a dual loss of engine power while in a hover near Palm Bay, Florida.  There were three fatalities.