On 6 September 2016 Sikorsky S-61N, N805AR (MSN 61717, formerly V8-UDZ of Brunei Shell Petroleum (BSP) from 1974 to 2010), was destroyed during a post-maintenance check flight after experiencing a dual loss of engine power while in a hover near Palm Bay, Florida. 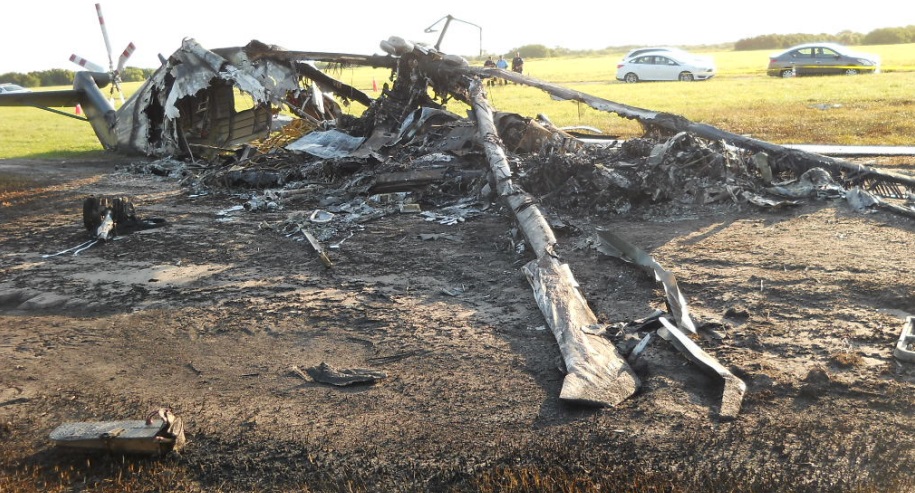 The three persons onboard were fatally injured due to “multiple blunt force injuries”.  The aircraft was operated AAR, who had acquired the aviation businesses of Xe (formerly Blackwater).  The aircraft had flown 40,296.2 flying hours at the time of the accident and an impressively high 107,600 cycles (consistent with the short sectors offshore Brunei).

…the helicopter’s fore/aft pitch servo had recently been removed and replaced. Subsequently, three functional check flights (FCF) were required to be completed.

Two FCFs were completed uneventfully the day of the accident, and the crewmembers were conducting the final FCF when the accident occurred. 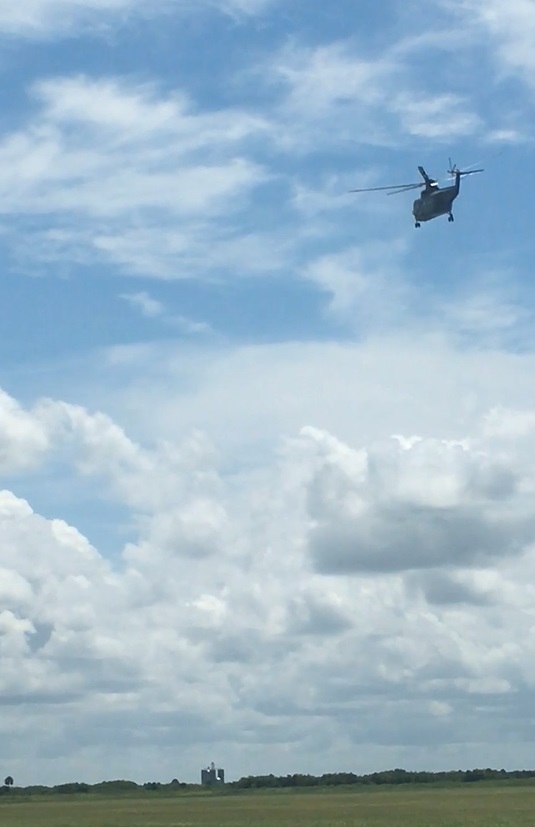 One of the maneuvers to be performed during the final FCF was rearward flight at a computed airspeed of 20 knots.

The crew performed two of these rearward maneuvers during the accident FCF.

While the pilot was flying and recovering from the first rearward flight maneuver, unusual sounds were heard, which the flight crew identified as a compressor stall. The pilot then told the maintenance crewmember that they were returning to their home airport; however, after discussing compressor stalls and engine exhaust gas temperatures with the copilot, the pilot changed his mind and told the maintenance crewmember that they were going to try the maneuver again in a different direction relative to the wind (with the wind off the nose).

The helicopter came to rest upright [and a] postcrash fire consumed the cockpit and cabin. The tail boom transition section exhibited partial thermal damage, and the tail boom remained intact. 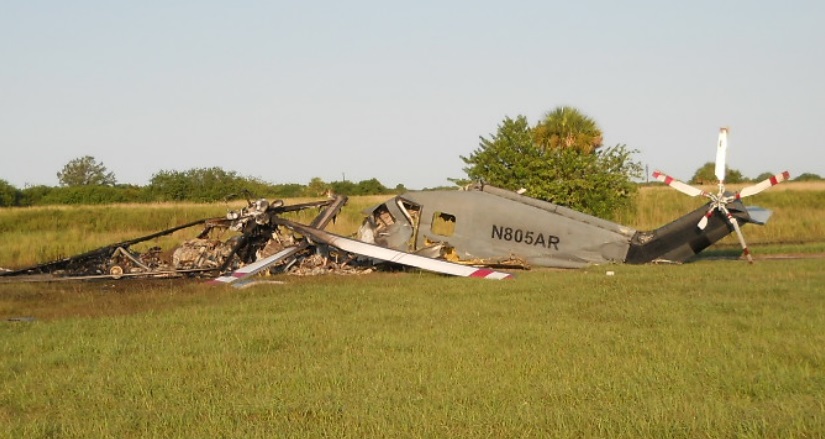 Recent maintenance on N805AR was as follows: 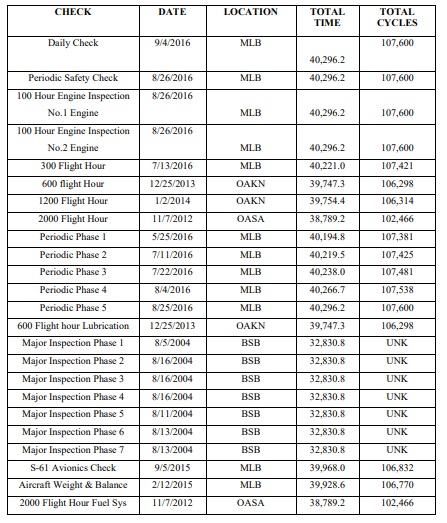 The NTSB reviewed a year of Flight Log entries.  The entries before the accident were: 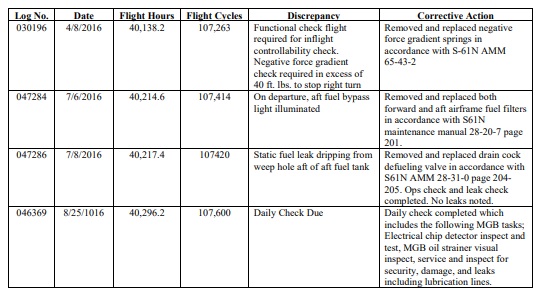 The aircraft was fitted with a Universal CVR-120.  There is no mention of a Health and Usage Monitoring System (HUMS) or Flight Data Recorder (FDR).  As the BSP S-61Ns were fitted with Meggitt IHUMS, which integrated HUMS with a CV/FDR, it appears N805AR had been demodified.

Although the crew identified the sounds and loss of power as compressor stalls, a sound spectrum study could not characterize the gas generator speed (Ng) behavior, due to overdriven audio on the CVR, to determine the engine anomaly the crew identified as a compressor stall. It is likely that the cause of the overdriven audio is related to an engine anomaly. At the same time the engine anomaly occurred, the sound spectrum revealed Nr quickly decayed due to a dual loss of engine power coupled with a high collective setting.

Because main rotor speed (Nr) decayed at the same time the overdriven audio occurred, it is likely both engines lost power nearly simultaneously. No anomalous damage to the engines was found that would have explained the dual loss of engine power and the main rotor drive system did not exhibit evidence of preimpact mechanical malfunction.

Due to the calculated fuel load and post crash fire, fuel exhaustion is considered unlikely.

During postaccident examination, the left (No. 1) freewheeling unit (FWU) was found to rotate freely in both directions of rotation instead of rotating freely in only one direction as it was designed to do. Had the left FWU failed in flight resulting in a loss of drive between the No. 1 engine and the main gearbox, the No. 1 engine power turbine would have experienced an overspeed due to the sudden loss of load. 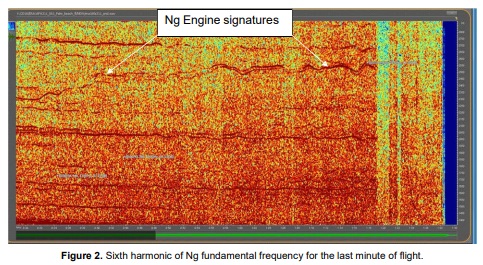 There was however no indication in acoustic data that would support this.

Therefore, the anomalous finding of rotation in both directions for the left FWU is likely a postaccident artifact. 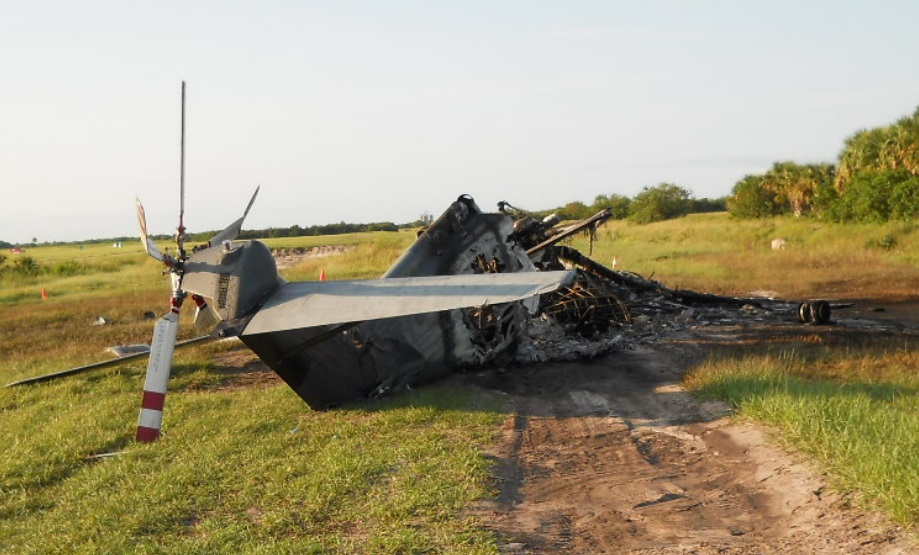 The engine history was as follows: 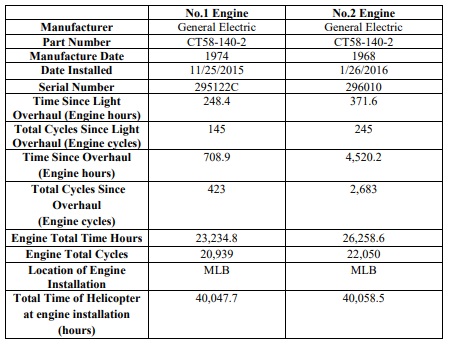 The NTSB highlight that:

Review of the rotorcraft flight manual (RFM) emergency procedures revealed, “2. If an abnormal engine conditions occurs such as engine stall, flame-out, or overtemperature, transition to single engine flight or landing….”

A dual loss of engine power for undetermined reasons after the pilot’s improper decision to attempt another maneuver after recovering from a perceived compressor stall, rather than returning to the airport.