Runaway Dash 8 Q400 at Aberdeen after Miscommunication Over Chocks: Collision of G-JECK into EMB-145EP G-SAJS 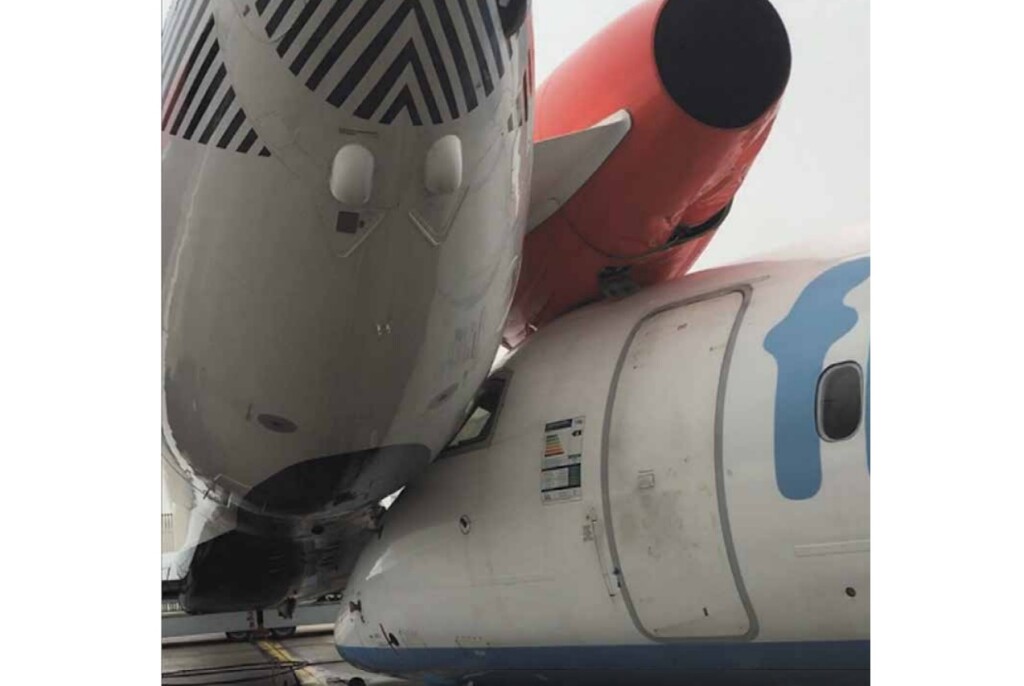 The UK Air Accidents Investigation Branch (AAIB) explain in their safety investigation report (issued 8 October 2020 with creditworthy alacrity) that G-JECK had been stored at Aberdeen Airport since March 2020 when Flybe had ceasing trading.

Departure was scheduled for 1600 hrs.

The commander and co-pilot for the flight had flown for the previous operator of G-JECK and were using the standard operating procedure (SOP) of that operator.  The pilots had not flown since the beginning of March 2020, so they had arranged to arrive at Aberdeen earlier than normal to provide additional time to prepare for the flight without having to rush. As the aircraft had not flown for some time, they also decided to conduct two separate and independent external and internal inspections.

The pilots had been escorted to the crew lounge by a dispatcher from the ground handling company.  The dispatcher returned at about 1520… 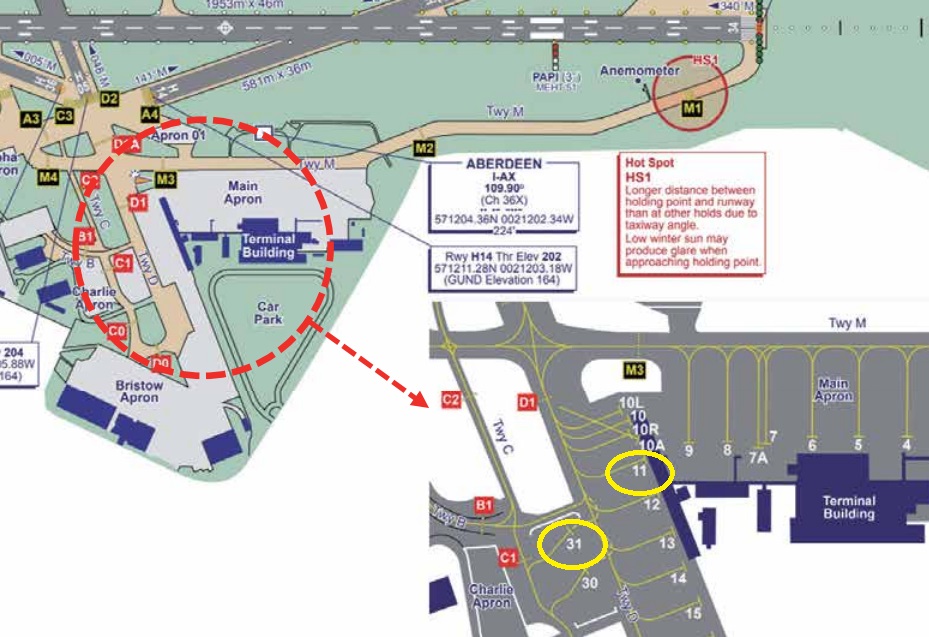 Parked on the opposite side of the taxiway, at Stand 11, was an Embraer EMB-145 aircraft, registration G-SAJS.

Departure was delayed to 1645 as the co-pilot’s luggage had yet to be delivered and the checks had been delayed awaiting on the owner’s representative.

However, there were no specific time constraints, and the pilots agreed to further extend the departure time if necessary.

The pilots, dispatcher and representative were met at the aircraft by three engineers from a Part-145 approved maintenance organisation (AMO) that had been maintaining the aircraft…whilst it was at Aberdeen.

Prior to boarding the aircraft, the pilots had checked that wheel chocks were fitted to the mainwheels and nosewheels. In the cockpit, the parking brake lever was confirmed as being set to the PARK position and whilst the commander reviewed the aircraft technical log, the co-pilot started the APU. The pilots checked the cockpit multi-function display (MFD) and noted that the fluid quantities of the hydraulic systems were adequate.

Neither pilot noticed what the park brake hydraulic system pressure was indicating on the MFD, but this was not required to be checked until the end of the aircraft power-on checks and prior to starting the first engine.

The AAIB note that the two had differing recollections of that conversation:

The dispatcher stated that when they had initially arrived at the aircraft, the commander had referred to preparing the aircraft for departure. The dispatcher had understood this to mean that he could proceed with removing the chocks from the left and right mainwheels. He further stated that he had not instructed anyone to remove the nosewheel chocks and, had he noticed they had been removed, that he would have refitted them.

The pilots, onboard the aircraft, had not seen the chocks being removed.

The co-pilot’s luggage was then collected and loaded into the aircraft, after which the dispatcher returned to the front of the aircraft where he attached a headset to the receptacle near the nose gear in preparation for engine start.

At that time the co-pilot carried out his own walk around inspection, the pre-agreed second check.

The park brake accumulator pressure had been checked, but the pilots had yet to reach the part of the checklist that called for the park brake hydraulic system pressure to be checked on the MFD.  As the pilots completed the load sheet, the dispatcher boarded the aircraft… and stood near the cockpit entrance. Standing on the ground near the cabin door was the representative.

The engineers and the dispatcher risked injury by trying to physically slow the aircraft while the representative ran to fetch some chocks. 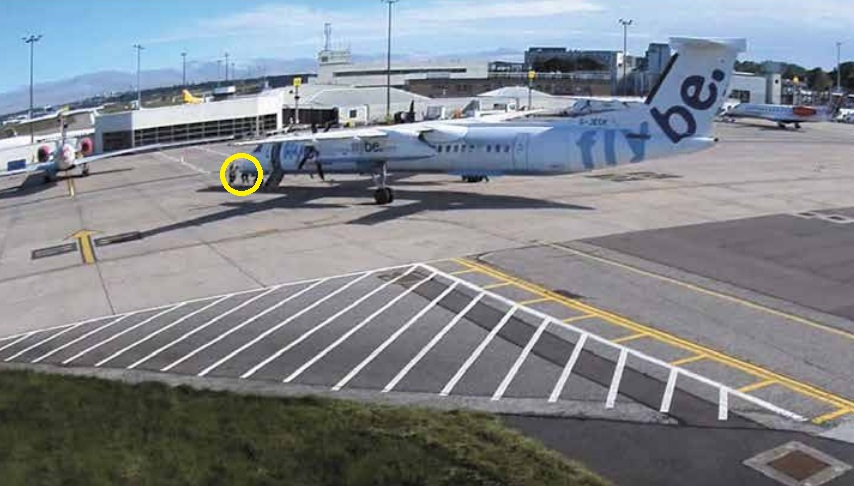 The aircraft however began to gather speed on the slight 1º incline toward G-SASJ, about 70 m away.

At a ground speed of about 5 kt, G-JECK struck the underside of G-SAJS’s No 2 engine, causing its right landing gear to be lifted clear of the ground. G-JECK came to a stop with the No 2 engine of G-SAJS resting on top of its forward fuselage. 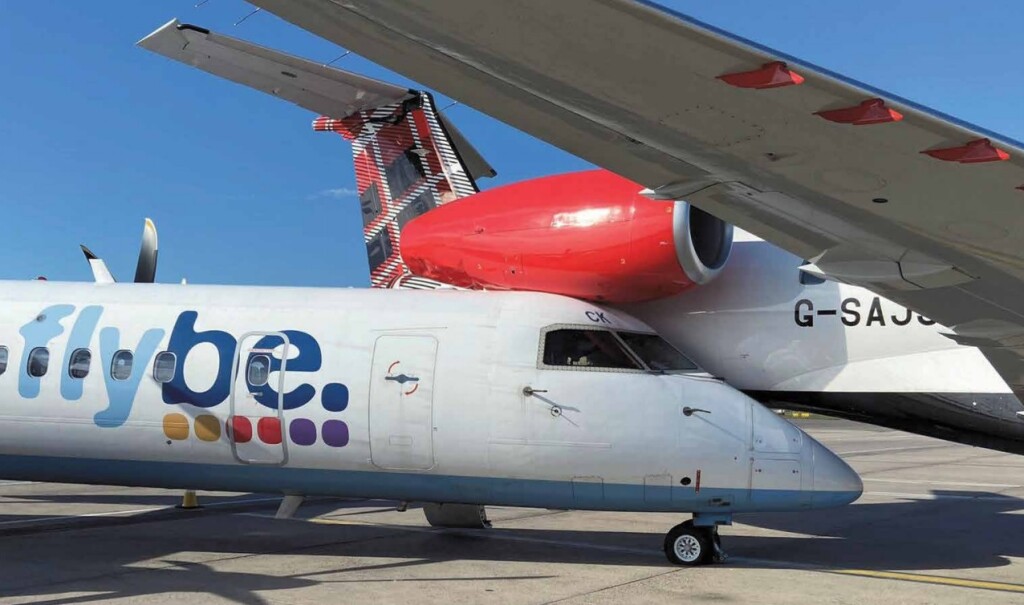 No one was injured.

A specialist recovery team using airbags separated the aircraft. The upper fuselage skin, cockpit emergency escape hatch and cockpit window of G-JECK, and the No 2 engine nacelle of G-SAJS, were damaged.

The park brake and normal braking systems of G-JECK were tested after the accident. No defects were found.

The evidence indicates that a misunderstanding led the dispatcher to believe that clearance had been given by the commander to remove the chocks from the mainwheels. The dispatcher was aware that the nosewheels were to remain chocked until after the engines had been started. However, following the representative’s offer of assistance to the dispatcher, a miscommunication appears to have led to the nosewheel chocks being inadvertently removed.

The removal of the chocks went unnoticed by the pilots, and the dispatcher also did not realise that the chocks had been removed from the nosewheels.  The dispatcher…stated that he did not expect them to be removed by anyone else, so he had no reason to focus attention on them at this point in time. The fact that 12 chocks, rather than 8, were loaded into the vehicle did not register as being at variance to these expectations.

Upon arrival at the aircraft, the pilots followed their normal procedure of checking that the wheels were chocked and, unsighted by them, the chocks were then removed. The pilots’ subsequent walkaround inspections did not require them to check the chocks and so their attention would not have been drawn to them.

The pilots had allowed themselves plenty of time to conduct duplicate checks of the inside and outside of the aircraft and to avoid missing any checklist items. Being aware of their reduced currency and that the aircraft had not flown for some time, their focus would have been predominantly on ensuring that no checklist item was omitted. This may have left less capacity to notice anything additional that they were not specifically looking for or expecting.

The park brake system had been pressurised to 3,000 psi when the engines had been operated four days before the accident. However, it was not unusual for the pressure to reduce over time whilst DHC-8-402 aircraft were parked; the AMM states that in two hours, the pressure could reduce by as much as 1,900 psi.

The evidence from the pilots’ walkarounds and photograph of the brake accumulator taken after the event, showed that the park brake hydraulic pressure could not have been more than the accumulator pre-charge pressure of about 500 psi.

Immediately after removal of the wheel chocks, it did not roll forward…

As neither the No 1 or No 2 hydraulic systems were pressurised, the application of the park brake and operation of the normal braking and nosewheel steering systems were ineffective in stopping or altering the path of the aircraft.

G-JECK rolled across Taxiway D from its parking position and struck G-SAJS because the nosewheel chocks had been inadvertently removed, and the hydraulic pressure in the park brake accumulator had depleted over several days to the point where it was unable to prevent the aircraft from moving on the 1° slope.

The organisation that provided the pilots for the flight and sub-contracted the ground handling services has:

The organisation contracted to provide ground handling has:

Another type of end of lease miscommunication was discussed by AAIB in relation to Easyjet Boeing 737-73V, G-EZJK on 12 January 2009:

A flight control manual reversion check was being conducted as part of a post maintenance check flight. During the check, the aircraft pitched rapidly nose-down, descending approximately 9,000 ft before control was recovered.

A number of issues relating to the planning of the check flight, liaison with engineering and the involvement of multiple organisations emerged. These resulted in a flight control adjustment having been applied in the opposite sense to that intended after a prior check flight. Seven safety recommendations were made by AAIB.