Maintenance, which included a compressor wash and an ‘A’ check, had been conducted on privately owned Airbus Helicopters  EC120B G-SWNG.  After the maintenance, according to the UK Air Accidents Investigation Branch (AAIB) report “the pilot left the helicopter for a short period of time” on 17 August 2017.

The pilot stated that when he returned to the helicopter, contrary to his normal practice, he forgot to complete a walkaround inspection of the helicopter before commencing the flight.

On approach to Wellesbourne, Warwickshire, an unusual noise was heard, and the pilot landed immediately.

Examination of the helicopter showed that the lower forward edge of the right engine cowling was damaged, the forward cowl latch assembly was missing and the centre latch had been damaged. 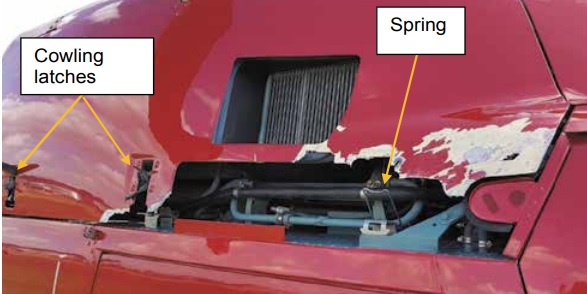 Damage was also observed on the inboard sections of all the main rotor blades.

The main rotor blade damage was caused by contact with the right engine cowling.  The AAIB explain that the engine cowls hinge upwards and are held closed by 3 latches:

Closing the main lever of each latch places the latch hook under tension, securing the cowling to the structure and locks the main lever in the closed position. 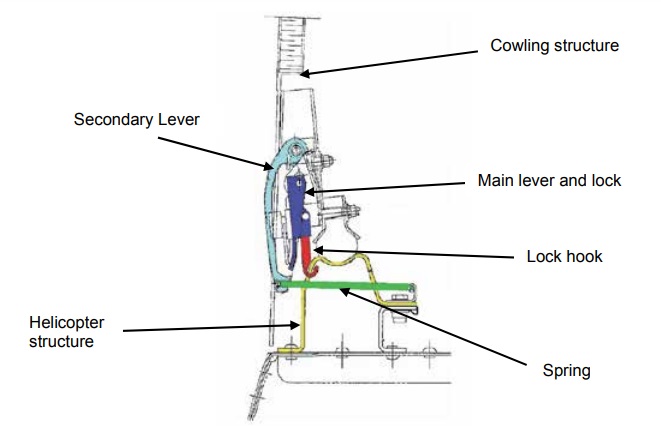 This highlighted the need to inspect the condition and function of the cowl latches during the Daily Inspection.

In view of the maintenance activity immediately before the flight it is reasonable to conclude that the right engine cowling latches had not been correctly locked when the ‘A’ check was completed. Given that the inner faces of the latches had been painted in a contrasting colour to the helicopters paint scheme it is probable that this condition would have been observed by the pilot during a pre-flight walkaround inspection. The fact that the pilot left the helicopter for a short period of time before takeoff, coupled with the recent completion of routine maintenance, probably introduced sufficient interruption and distraction to the pilot’s normal pre-flight routine to cause him to forget to carry out a pre-flight walkaround inspection.

In a recent article Flawed Post-Flight and Pre-Flight Inspections Miss Propeller Damage we noted that the Australian Transport Safety Bureau (ATSB) highlighted Flight Safety Foundation (FSF) guidance that after interruptions/distractions have been recognised and identified, the next priority is to re-establish situation awareness as follows:

We have previously discussed other cowling and panel loss events: