On 13 September 2019 Airbus Helicopters BK117C1 P2-TAH (formerly UK HEMS G-RESC), operated by Tribal Aurora Helicopters (TAH), was making an over sea VFR positioning flight from Buka to Tokua in Papua New Guinea (PNG), when it impacted the sea approximately 2.7 nm SE of Silur.  The pilot was killed, but the passenger, a company engineer, was rescued. 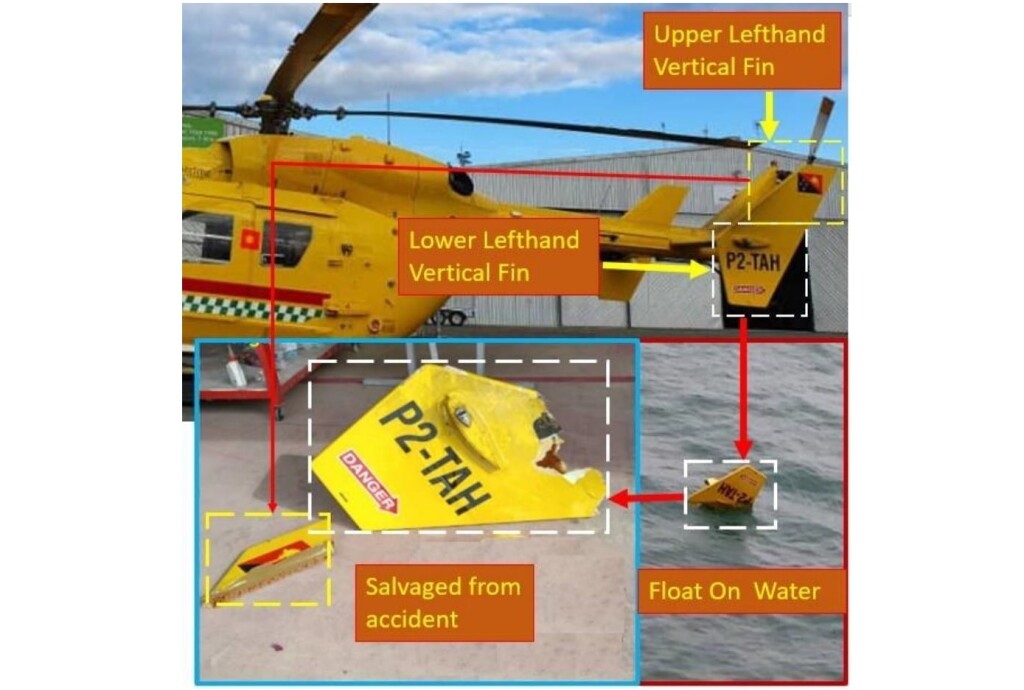 The PNG Accident Investigation Commission (AIC) explain in their safety investigation report (issued on 31 December 2020) that the 49-year-old pilot had c11,500 hours of flying experience, 300 on type. The pilot did not have a current IFR rating.

Early in the flight the helicopter deviated slightly from its intended track descended from 2,540 ft to 1,333 ft. to avoid entering adverse weather.  The investigators determined that about 30 minutes later, at about 01:03 UTC (11:03 Local Time), the helicopter entered IMC.  At that point the passenger recalled…

…the pilot revising the destination on the GPS from Tokua to a position which he believed was the nearest land, around the South East coastal area of New Ireland. The helicopter subsequently entered an area of heavy rainfall with thunderstorms. 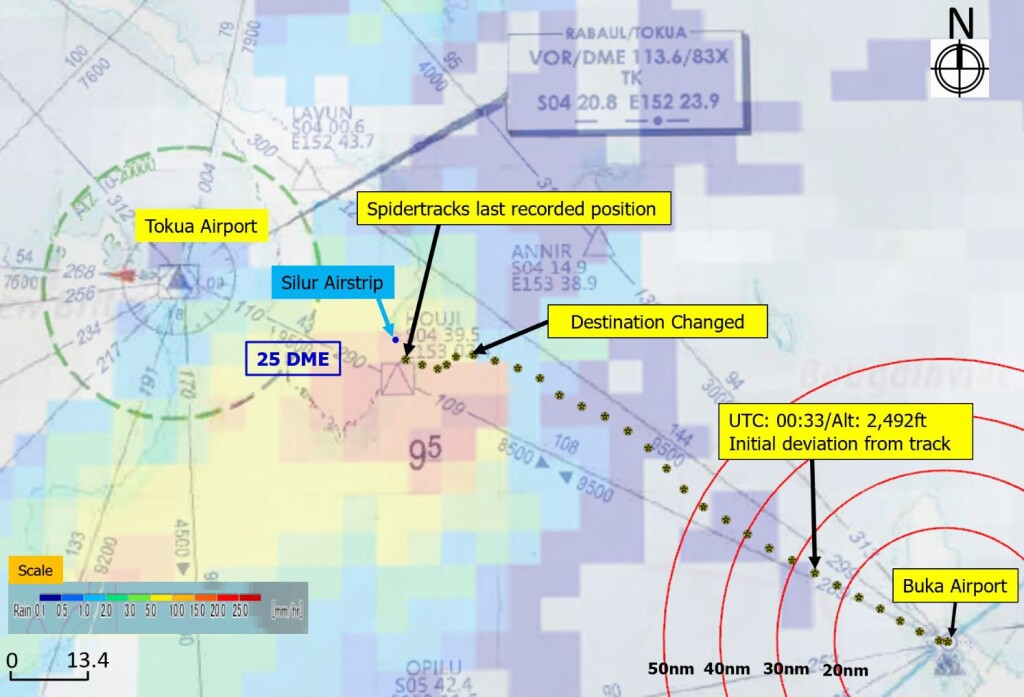 The last recorded data point at 01:15 showed the helicopter at an altitude of 217 ft and groundspeed of 62 kt, less than a mile from the Southern coast of New Ireland.

Based on the passenger statement, the AIC determined that after the last recorded data point and as the helicopter continued tracking towards the revised position, it descended and slowed down to less than 5 kt prior to impacting the water.

According to the passenger, they had worn their life jackets before the flight commenced. He reported that when the aircraft impacted water, he got knocked unconscious. When he regained consciousness, he noticed that the helicopter was underwater and air bubbles were escaping through the forward windshield frame. He looked to the right and saw that the pilot was missing.

The passenger reported that he removed his seatbelt and followed air bubbles through the forward windshield frame and swam to the surface and inflated his lifejacket. After surfacing, the passenger recalled sighting the pilot at a distance and tried calling out to him but because it was windy and the waves were almost 5 m high, he lost sight of the pilot again. That was the last time he saw the pilot

There was no [Artex C406-2 HM] Emergency Locator Transmitter (ELT) signal transmitted after the impact.

The SAR Uncertainty Phase was declared by Air Traffic Control 3 minutes after the ETA at 01:28 UTC, this was rapidly raised to the Alert Phase and then the Distress Phase at 01:55 UTC.

The Operator stated that they had not been monitoring the helicopter on Spidertracks [sattelite tracking] during the accident flight, however they were alerted by the pilot of P2-MUM [a Bell 430 of Manolos Aviation] at 02:03 that ATC was trying to contact P2-TAH and there was no response.  The Operator immediately commenced their Emergency Response Plan…by discussing what was showing on Spidertracks at that time. The last mark showed the aircraft just off the shore of New Ireland, less than 1 minute from the land. Therefore, the Operator assumed the aircraft had probably landed due to weather and with only 30 second shutdown on the engines, that the aircraft had been powered off before another transmission could be sent from Spidertracks. This last known position of P2-TAH was passed to the pilot of P2-MUM, who relayed it to ATC. 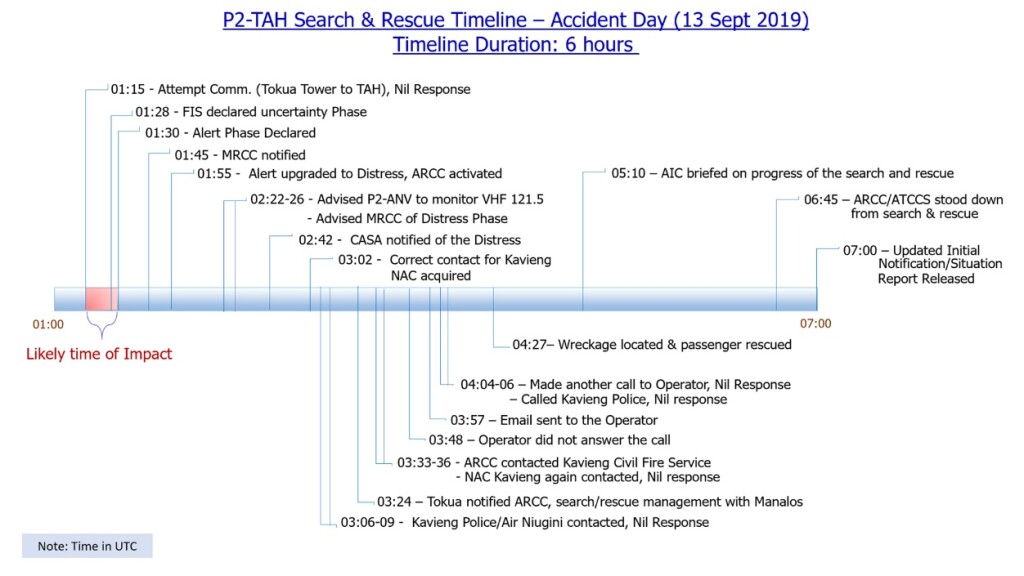 At 04:27 UTC, the pilot of P2-NTI reported that he had located the wreckage and rescued the passenger who had egressed the helicopter and swam to shore. Later that day, the body of the pilot was found and recovered from the sea by locals.

The PNG State pathologist…reported that the pilot sustained blunt force trauma to the head at the time the aircraft impacted water, and subsequently drowned due to aspiration of seawater.

The main wreckage of the helicopter was not recovered. The left vertical fin below was found floating in the area near the last known coordinates. The damage observed on the components indicate that it ruptured upon impact with the water.

Although the passenger stated that he observed weather starting to deteriorate as the flight was progressing, the satellite weather images for the day of the accident showed that the adverse weather conditions were already existent before the commencement of the flight. 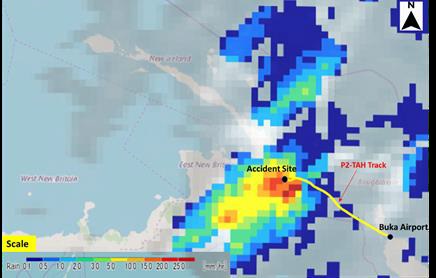 P2-MUM departed Buka about 20 minutes after P2-TAH on the same route to Tokua but at 5,600 ft.  Its pilot reported that he…

…flew over dark clouds maintaining vertical separation along the South coast of New Ireland. However, P2-TAH’s pilot decided to conduct the flight at a lower altitude, in which weather conditions did not allow him to maintain visual references throughout the entire route.

The pilot of P2-TAH descended to 200 ft “probably in an attempt to go below the cloud base to maintain or recover visual references” and asked the passenger “to monitor the altimeter and to alert the pilot if the reading dropped below 200 ft”.   This tactic, known as scud running, was “ineffective as the helicopter progressively encountered adverse weather conditions during flight”.

The investigation determined that the pilot was not currently rated IFR, and the helicopter was not equipped for performing IFR operations, so when the pilot entered IMC, the workload would have become overwhelming to a point in which he was unable to effectively manage, monitor and control the flight parameters, tasking the passenger to monitor altitude. Under these circumstances, the pilot’s situational awareness was compromised, and he was unable to identify when the helicopter descended towards the surface to a point in which the impact was imminent.

When the pilot of a helicopter does not have any fixed visual reference, the pilot tends to become disoriented with determining the actual position of the aircraft. This may be considered especially during operations over water where there is no stationary reference point.

The investigation determined that while the pilot was operating at a low altitude, he may have been disoriented due to the lack of visual references and the constant wave motion.

The TAH Operations Manual required that pilots complete an Area/Familiarisation Check with an approved pilot.  The investigation found that this pilot had not completed such a check.

The pilot descended to 200 ft probably in attempt to go below the cloud base. As the pilot was manoeuvring to regain visual references, he was unable to maintain effective control of the flight parameters of the helicopter, and impacted into the surface.