In May 2014 the Canadian Transportation Safety Board (TSB) issued their report into a Loss of Control Inflight (LOC-I) accident to a Cessna 208B Caravan on  18 November 2012.  The aircraft was on charter to a local mining company to transport employees the 310nm between Snow Lake and Winnipeg, Manitoba. 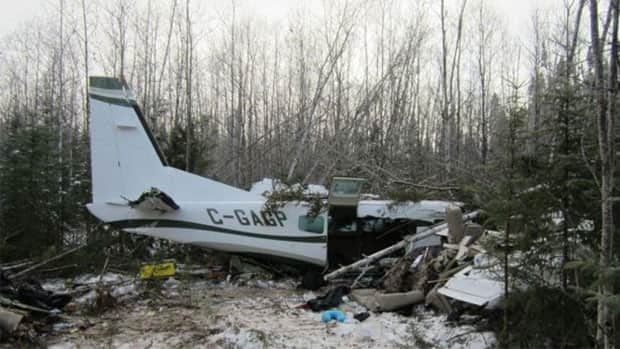 …shortly after take-off, the aircraft descended and struck the terrain in a wooded area approximately 0.9 nautical miles beyond the departure end of the runway. The pilot was fatally injured, and the 7 passengers sustained serious injuries. The aircraft was destroyed by impact forces, and a small fire ensued near the engine.

Fortunately the fires was due to spilt engine oil which was quickly burnt off, so the fire extinguished. The investigation concluded that the impact forces exceeded the crashworthy design limits of the aircraft. The buckling or compression of the subfloor structure, along with the flexing or movement of the instrument panel, and the collapsing  and forward positioning of the pilot’s seat, reduced the livable space for the pilot to the degree that the accident was non-survivable. The front seat passenger was knocked unconscious, but likely survived [only] due to the aft-most positioning of that seat.

Fortuitously the Emergency Locator Transmitter activated successfully and some passengers had mobile phone contact.  Even so, despite an impact close to the airfield:

Response to the site was delayed by approximately 3 hours, because of uncertainty as to the exact location of the site and difficulty in moving vehicles through the rocky and wooded terrain.

Even 3 hours after the accident rime ice was found adhering to the leading edge of the vertical stabilizer.  In fact the TSB note that:

This implied to the TSB that the previous flight had been conducted Instrument Meteorological Conditions which were outside the operator’s approval (they were cleared for visual conditions only) and for which the pilot was not qualified (he had no Instrument Rating).

Although the pilot made an attempt to remove the ice before [the final] flight, a significant amount of it remained on the aircraft. No de-icing or anti-icing fluids were applied to the wing or horizontal stabilizer, and no tactile inspection of the upper wing or tail surfaces was observed. The ice on the leading edges of aircraft’s wings and tail would have reduced available lift, added extra weight, increased aerodynamic drag, and thereby reduced its take-off and climb performance, increased its stall speed, and impaired the protection afforded by its stall  warning system, which is activated at a pre-set angle of attack based on a clean wing.

TSB also note that on the day of the accident, the cloud ceiling was still lower, further increasing the chances of ice forming.  Additionally the TSB identified another shortfall on the operator’s management (or ‘operational control’) of flights that increased risk even more:

Part of this relates to errors and omissions in the calculation of payload. Another failure was that the passengers did not receive a passenger briefing before take-off as required.  Consequently the TSB found that some passengers were improperly seated and restrained at impact.

Type of Operation and Oversight

TSB comment that this contract was a form of ‘repetitive charter’.  In Canada, and in some other countries such charters, particularly with smaller aircraft, are subject to less regulation and less attention by the regulator.  As TSB point out, these…

…are not considered to be scheduled air operators under current Transport Canada (TC) regulations. Therefore, even though such charter operators provide a service with many of the features of a scheduled service, TC does not provide the same degree of oversight as it does for a scheduled operator.

Perversely this means the customer, the mining company, was not receiving the same level of assurance from the regulators when chartering the whole aircraft as they would get if they were buying just a single seat via a travel agent! In fact the Transport Canada had last visited the operator in March 2010, 20 months earlier, and the regulator’s policy would allow periods of up to 5 years between visits. It is not uncommon for operators, particularly small operators, to be so keen to satisfy their customer that they inadvertently do so in a way that increases risk.

TSB note that such ‘repetitive charters’ can create:

… the expectation of performance in various operating weather conditions for which  the operator is not certified, as compared to non-scheduled operations.

This is why its important that customers for air services have access to specialist aviation advise to ensure they have reasonable expectations and appropriate assurance, though a fundamental is wisely choosing their contracted air operators.

This aircraft was not fitted with a Flight Data Recorder (FDRs) or a Cockpit Voice Recorder (CVRs), nor was it required to by regulation.  Yet again, TSB comment on the increasing availability of lightweight recorder systems.  They also note that FDR can also be downloaded to conduct flight data monitoring (FDM) of normal operations, observing that:

FDM has proven to benefit safety by giving operators the tools to look carefully at individual flights and ultimately at the operation of their fleets over time. This review of objective data, especially as an integral component of a company safety management system, has proven beneficial in the proactive identification and correction of safety deficiencies and the prevention of accidents. The development of lightweight flight-recording system technology presents an opportunity to extend FDM approaches to smaller operations. Using this technology and FDM, these operations will be able to monitor standard operating procedure compliance, pilot decision making, and adherence to operational limitations, among other things. Review of this information will allow operators to identify problems in their operations and initiate corrective actions before an accident takes place. Such advantages are highly relevant in accidents such as this one.  Consequently TSB have recommended: The Department of Transport work with industry to remove obstacles to and develop recommended practices for the implementation of flight data monitoring and the installation of lightweight flight recording systems by commercial operators not currently required to carry these systems. A13-01

UPDATE 5 November 2014: NTSB held a board meeting on a loss of control accident in 2013 to an Alaskan State Trooper AS350B engaged in a search and rescue mission.  NTSB made a number of findings and recommendations and again emphasises the value of recorders such as, in this case, the Appareo Vision 1000 (discussed in detail in an earlier Aerossurance article).

Aerossurance are Aberdeen based aviation consultants with extensive experience supporting the mining and oil & gas sectors.  For aviation advice you can trust, contact us at: enquiries@aerossurance.com