During a post-maintenance flight over Cornwall on 27 June 2019, of Leonardo A109E, G-ETPI, as the helicopter was accelerated towards 140 kt, there was a loud bang and a sudden increase in wind noise.  The window transparency from the left cockpit door had separated. 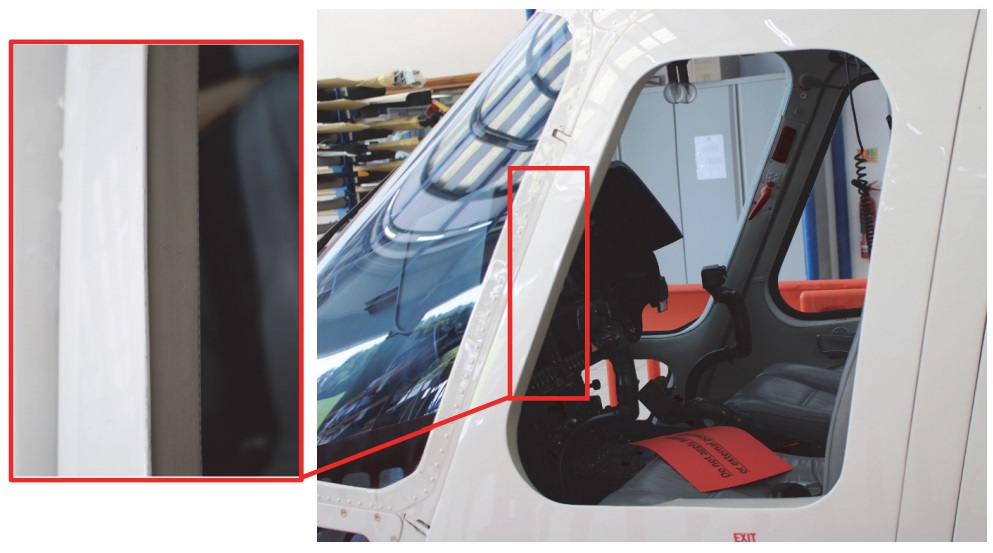 The pilot was able to land the aircraft safely.

According to the Air Accidents Investigation Branch (AAIB) in their safety investigation report:

The A109E cockpit doors are of a composite construction and include a non-opening single acrylic window transparency…attached to the door by an extruded rubber seal channel. 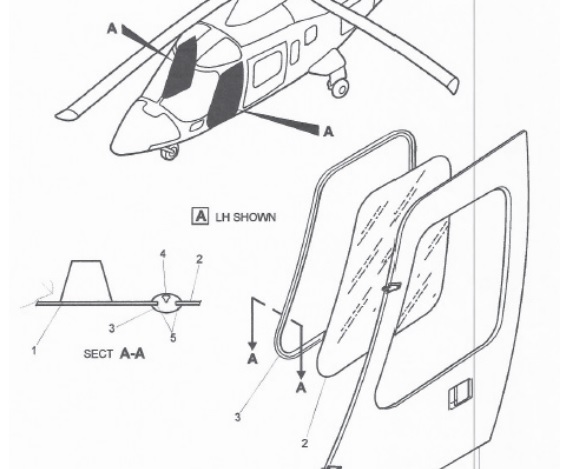 The rubber seal has three separate grooves to accommodate the window, the door frame and a seal filler strip which locks the seal and window in place.

The Maintenance Manual requires that a thin layer of adhesive is applied to the seal channel during installation.  During the previous maintenance the aircraft had been repainted…

…which necessitated the removal and disassembly of all cockpit and cabin doors and windows.  These tasks were documented as a single item on a maintenance worksheet, which was signed-off by the certifying engineer on 21 March 2019.

Following completion of the helicopter base maintenance and repaint, the doors and windows were reassembled and refitted by an engineer. The worksheet did not record the date on which the task had been completed but indicated that it had been inspected and certified by the certifying engineer on 9 April 2019.

During examination of the window aperture afterwards it was not possible to confirm that adhesive had been used.  The window and seal were never recovered so could not be examined.

The right cockpit door window was removed for inspection and this revealed the correct presence of adhesive in the grooves of the seal.

Inspection of the cabin windows confirmed adhesive had been used but “minimal squeeze-out”and so extra adhesive was applied.  However:

The post-incident inspection and reinstallation of the cockpit door windows was undertaken by the same engineer and certifying engineer who had done the original window installation in April 2019.

The maintenance organisation carried out their own investigation, which only started after the post-incident inspection:

It identified that the engineer who installed the left cockpit door window had experienced some difficulty fitting the seal filler strip to the seal channel. The engineer had used a soapy solution to insert the filler strip but acknowledged during the investigation that the solution was applied liberally, such that it covered the window and the concentration of soap had been stronger than might normally be used.

The C537 adhesive specified in the A109E maintenance manual is a multi-purpose silicone adhesive/sealant which adheres to most surfaces and cures to form a tough flexible rubber.

The maintenance organisation considered that, applied in correct quantity, the original and post-incident installation of all the cabin, cockpit and cockpit door windows would have required more adhesive than that which appeared to have been used. It would also have expected to see residual adhesive on the door frame.

The maintenance organisation’s investigators concluded that…

…little or no adhesive had been applied to the door side of the left cockpit door seal and that excessive use of an overly soapy solution to fit the seal filler strip had reduced the ability of the seal to retain the window due to friction alone.

[As] the helicopter’s ventilation system was set to maximum during the incident flight would have created a cabin pressure differential as the helicopter accelerated and this may have been a contributory factor. It believed the ram air effect of the ventilation system may have pushed the window outwards and caused the seal to roll off the door aperture, assisted by the lubricating effect of the soapy residue.

[They] also determined that the certifying engineer did not perform a staged inspection during the task to confirm the presence of adhesive prior to installation of the window and seal. This was based on a perception that the task was relatively simple and that the engineer performing the task was fully competent to perform it correctly.

[They] also identified that its procedures did not make it clear that maintenance tasks involving steps which cannot be visually inspected or otherwise verified upon final completion, should be subject to a staged inspection.

The A109E maintenance manual indicates that a small brush should be used to apply a soapy solution within the grooves of the seal filler channel. This suggests the need for precise application…

In the 11 weeks had elapsed between installation of the window and the incident, the water would likely have evaporated leaving a soapy residue. This may have acted as a lubricant, which in combination with the absence of adhesive allowed the window to separate from the cockpit door.

Reduced supervisory oversight by the certifying engineer, based on their evaluation of both the task and staff competence, meant that stage checks were not conducted throughout the window installation task. Such checks may have identified and addressed the difficulties that the engineer experienced while installing the windows and/or the absence of adhesive on some of the window seals.

The fact that the same engineers undertook the same task, on the same aircraft could have adversely affected their recollections of the original installation, when interviewed during the subsequent safety investigation. This may have affected the quality of information available to the investigation.

The maintenance organisation has added window replacement to their list of Critical Maintenance Tasks.  They are changing their Emergency Response Plan so that maintenance personnel involved in maintaining an aircraft are not involved in the response to an associated incident with that aircraft and they have…

…introduced a new production planning tool across all its maintenance bases to control and monitor to allocation of manpower, including supervisory staff, to aircraft undergoing base maintenance.