On 1 July 2020 Swiss Helicopter Guimbal Cabri G2 HB-ZDQ was conducting a training flight near Vaulruz in Switzerland when the helicopter’s canopy shattered.   The Swiss Transportation Safety Investigation Board (STSB) explain in the safety investigation report (in French) that both student and instructor suffered minor injuries to their face, hands and legs. 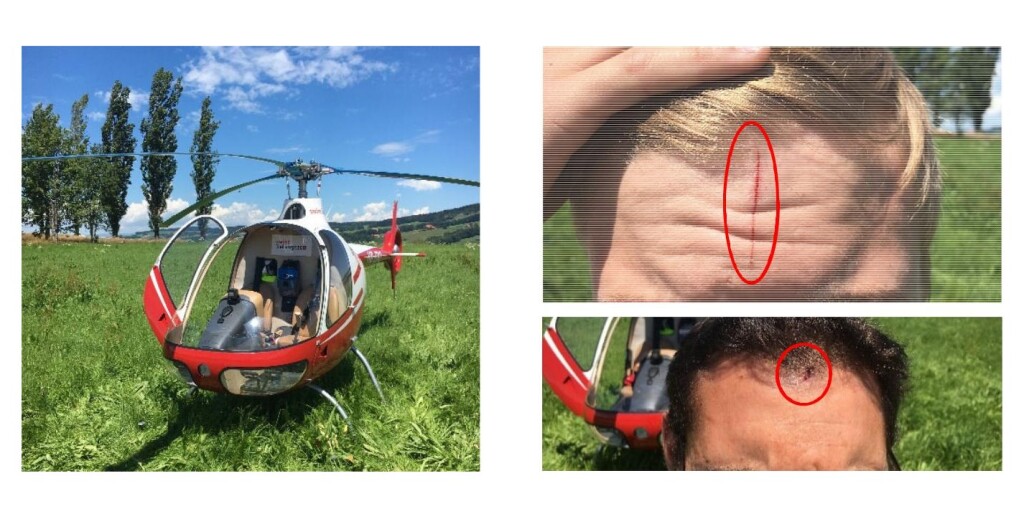 Swiss Helicopters Guimbal Cabri G2 HB-ZDQ: Left, HB-ZDQ helicopter with almost all of the canopy torn off. Right, injuries caused by the impacts of pieces of projected plexiglass (Credit: SUST)

The serious incident occurred during an exercise to demonstrate handling at close to Vne (Velocity, Never Exceed) at c119 kt at a pressure altitude of 5500 ft.

While passing the indicated speed of 110 kt, the plexiglass canopy suddenly burst. Due to the high relative wind, a lot of debris ended up in the cockpit, the headsets and glasses of the two crew members were torn off. The instructor decreases the speed, puts on his second pair of prescription glasses which is in his trouser pocket and decided to land as quickly as possible.

The implosion was significant enough to trigger the Emergency Locator Transmitter (ELT).  The helicopter landed safely on a football field about 5 minutes later.

The one-piece plexiglass Capri canopy is 2 mm thick and glued to the fuselage around its perimeter. The investigators note that the “canopy has been designed to withstand aerodynamic stresses” and that these are highest at high speed.

At the site of the serious incident, it was observed that a suction cup attachment was installed on the canopy. 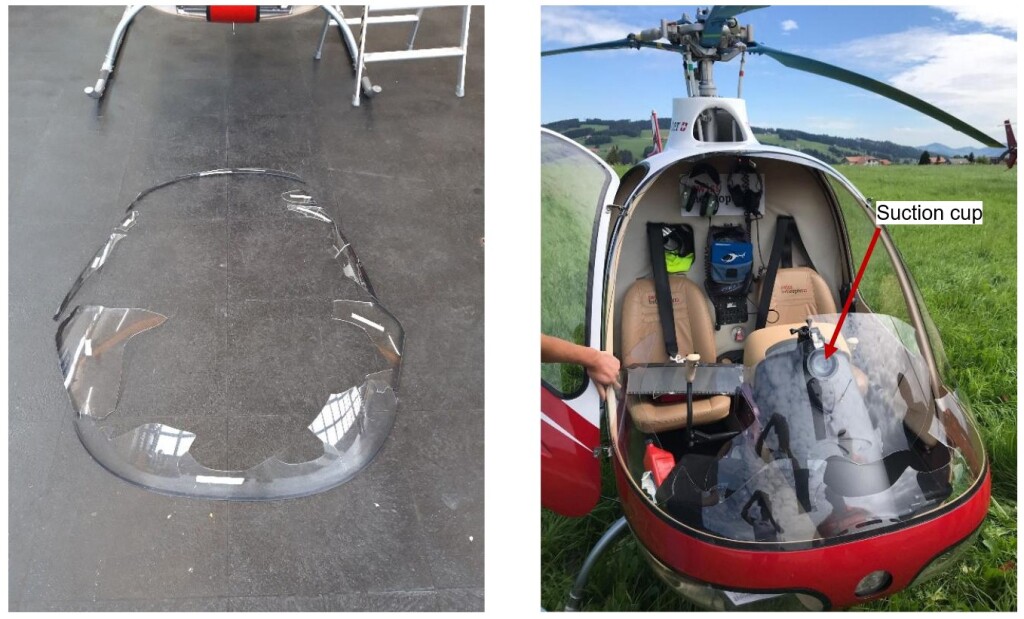 Swiss Helicopters Guimbal Cabri G2 HB-ZDQ: Left, canopy of the HB-ZDQ completely dismantled. The pieces of plexiglass in the middle of the canopy ended up partly inside the cockpit, others parts were thrown out of the helicopter. Right, approximate positioning of the mounting suction cup for holding an on-board camera (Credit: SUST)

Such an installation makes it possible to fix an on-board camera, for example, but it was not provided for by the manufacturer and can generate additional stresses on the one-piece canopy and consequently weaken it.

Guimbal issued Service Letter, SL 20-001 A which advises owners not to attach items to the canopy with a suction cup mount.

The investigators note that Airbus Helicopters has also recently issued safety promotion notice 3587-P-00, encouraging the wearing of a helmet.