On 2 February 2019 Leonardo Helicopters AW139 5N-CML of Caverton Helicopters crashed while landing at a football pitch at Kabba, Kogi State on a VVIP flight with Nigerian Vice President Oluyemi Oluleke “Yemi” Osinbajo on board.  All 12 on board escaped without injury, though the aircraft was destroyed.  The chartered commercial helicopter was being used because the Vice President was making an election campaign visit. 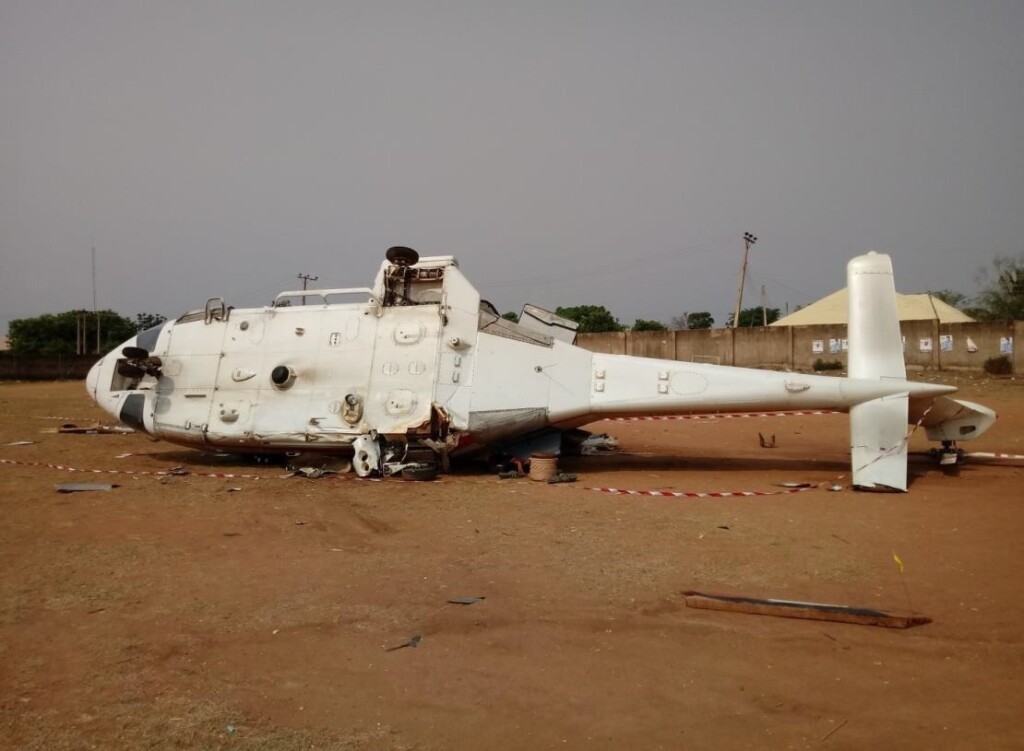 The Accident Investigation Bureau Nigeria (AIB Nigeria) say, in their safety investigation report (issued 28 July 2020), that the helicopter had positioned from Lagos to the capital, Abuja, that morning, landing at 10:00.

The helicopter was refuelled and the flight crew prepared for the VIP charter flight. At about an hour before the planned departure, the flight crew received the coordinates for the temporary landing sites at Kabba and Okene, and they were thus able to finalize their flight planning for the mission. According to the weather report from the Nigerian Meteorological Agency (NiMet), the prevailing weather at the football field was good with visibility over 10 km and no clouds below 5,000 ft. The Kabba landing area was an unpaved area comprising a football field located in the centre with two spectator stands on each side of the field. The elevation of the area was 1,500 ft AMSL and…the field surface was characterized by scattered patches of grass and loose fine soil.  Although the landing area was not an approved heliport, it was suitable as a temporary helicopter landing site.

At about 13:46, the helicopter departed for Kabba as callsign NGR002.  At 14:20 in cruise at 5000 ft AMSL, the Multi-Purpose Flight Recorder (MPFR) light came ON and the Crew Alerting System (CAS) displayed “FDR AND CVR FAIL”.  The crew actioned the appropriate Quick Reference Handbook (QRH) checklist successfully and so the flight could continue.

The flight crew stated that on initial approach, they carried out the pre-landing checks which included a landing brief for a ground helipad landing and a Landing Decision Point (or committal point) of 100 ft/20 kt indicated airspeed (IAS) based on the surrounding obstacles.

The flight crew of NGR002 stated that they sighted the intended landing area as a result of the cloud of residual dust generated by the downwash of 5N-PEJ’s main rotor. The flight approached the landing area and the Pilot stated that he was able to take note of the area and the obstacles outside the landing area (spectators’ stands, football field goal posts, a car and people awaiting the arrival of the VIPs). After sighting the football field, the flight crew agreed on the selected landing area. NGR002 approached with the speed of 20 kt to about a 100 ft, and entered a hover to land. At about 50 ft above ground level, a brownout set in.

The report notes that “Since NATO has been operating in the arid climates (e.g., Africa and Afghanistan), Rotary-Wing Brownout (RWB) is responsible for approximately 75% of coalition helicopter mishaps.”

The flight crew lost visual contact with the ground and external surroundings. They elected to use the Instantaneous Vertical Speed Indicator (IVSI) and Radio Altimeter (RAD ALT) as references to control the descent. The Co-pilot began radio altitude callouts “35, 30, l25, 20 and 15”. After the “15” callout, neither the Co-pilot, nor the Pilot could remember making or hearing further callouts. At about 14:34 h, the helicopter experienced a hard landing on the right main landing gear and rolled over onto its right side.  The five main rotor blades struck the ground and separated from the rotor head. 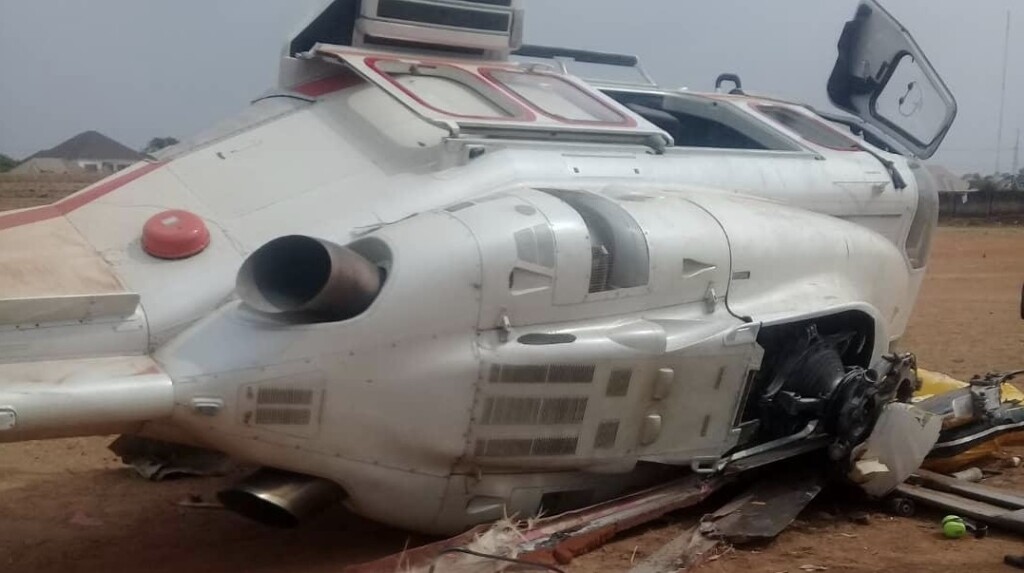 The flight crew executed the emergency procedures, which included shutting off the engines and the fuel, and switching off the battery and the generators. 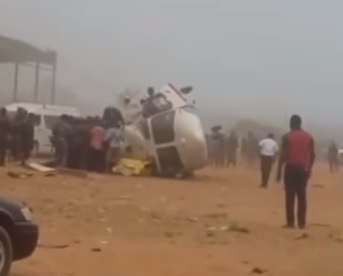 The MFDR malfunctioned 34 minutes into the accident flight, and thus no data from the approach and landing phases were recorded on the MPFR. However, the helicopter was fitted with a Quick Access Recorder (QAR) that recorded data but not audio. The QAR recorded 930 parameters that covered the entire flight. The flight was reconstructed using the QAR data. The QAR recorded a vertical acceleration of 1.4 g at the moment of landing. The tri-axial accelerometers, located near the centre of gravity of the helicopter, were the primary source of acceleration data recorded.

According to Leonardo Helicopters, the helicopter was delivered equipped with [Honeywell] EPIC SW phase 6.2, and Caverton Helicopters did not apply the optional Service Bulletin to upgrade the 5N-CML EPIC system to SW phase 7. Therefore, the normal acceleration was filtered by the EPIC system, which caused some of the fastest acceleration spikes to be smoothed out. The filter on the tri-axial accelerometer was removed from the EPIC SW phase 7 onwards. Hence, it was likely that the landing was significantly “harder” than the 1.4 g recorded. [The MPFR failure] was not a single isolated occurrence. The maintenance documentation showed that MPFR failures had occurred a few times before. In each failure instance, the MPFR component had been replaced, the system had been tested and found functional. However, the reasons for the failures had not been determined.

Safety Investigation: The Operator and their Procedures

Caverton was set up in 2001 to serve the onshore helicopter sector. Since then, the company has expanded into the offshore oil and gas operations.  They operate a fleet of 27 aircraft (AW139s, Bell 407GXPs, Bell 412s, de Havilland DHC-6 Twin Otters, Sikorsky S-76Cs and Airbus H125s / AS350s). Caverton Operations Manual Part A (OM Part A) states that “Aerodromes not listed in the OM Part C may be used on occasion; providing that the Director of Operations or Chief Pilot has authorised the operation” 10 Enhanced Operational Controls (EOCs) “are in place and documented”.  The OM A also stated that:

When operating in known or anticipated brownout condition during takeoff and landing, where recirculating dust may seriously impair visibility, the takeoff and landing techniques should slightly be adapted. Landing may be one of these methods depending on the conditions and the discretion of the commander.

1. Make a no hover landing, reducing to zero ground speed exactly at the point of landing

2. Make a running landing, but only if the surface is known to be level and firm the pilot should seek a small object on the ground that he can land near so that it can be good visual reference throughout the landing.

Safety Investigation: The Circumstances and Conduct of the Crew

The operator explained that as the landing site was only identified to the crew 60 minutes in advance, due to security reasons, a risk assessment and a classification of the intended landing sites could not be done as required by the OM A.  Aerial reconnaissance of the site is also required on arrival.

However, the [Aircraft Commander] stated that when he approached the landing area, he was in a position to observe and take note of the landing area and the obstacles outside the landing area. In addition, the Pilot was in radio communication with the flight crew of the police helicopter that had landed four minutes earlier.

The [OM Part A] recommended landing technique in brownout was to make a running landing and choose a noticeable feature on the ground in order to set up the approach and land at the designated landing zone.  The flight crew adapted a landing technique of “hover to land”. As the brownout occurred close to the ground, the sudden loss of visual references would have necessitated a transition from visual flying to flying on instruments.  The sudden degradation of visibility eliminated the visual guidance references, as well as distance and height perception.

It was likely that the brownout and the loss of visual references caused flight crew spatial disorientation and loss of situational awareness. As a result, the helicopter attitude may not have been level and a lateral movement may have taken place, which may have contributed to the hard landing and the breakage of the right landing gear.

Even if the flight crew had contemplated a go- around, they had passed their Landing Decision Point. Considering the confinement of the area with a goal post ahead of the helicopter, the flight crew may have felt committed to land. Although the Pilot was significantly experienced as regards helicopter flight hours, his experience and training in brownout conditions was limited. Having lost the visual references, the Pilot lowered the collective to bring the helicopter down, which resulted in a hard landing on the right main gear.

The immediate emergency procedure actions [by the flight crew] significantly contributed to the successful evacuation of the occupants from the helicopter. 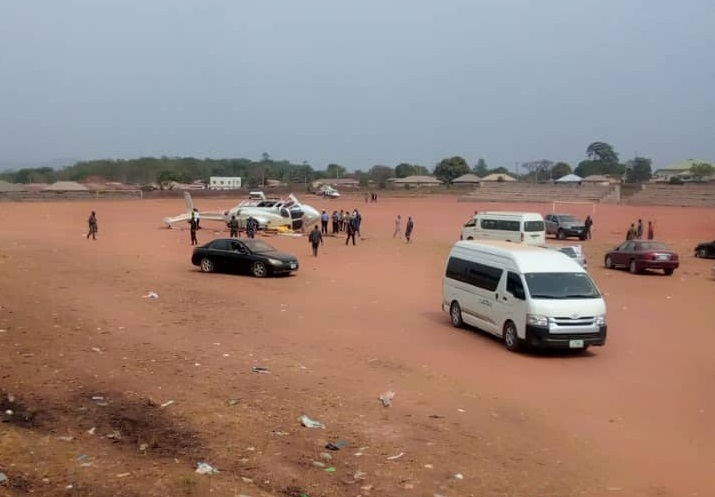 The operator had a Safety Management System (SMS), created by a foreign provider who self-proclaimed the resulting SMS as “fully functioning” in their marketing.   In their accident report the AIB are however critical of this SMS.  For example the SMS manual described a Management of Change process:

However, during post-accident interviews and further correspondence with the company, it was established that Management of Change process had neither been carried out at the time when the company-initiated VIP charter flight operations, nor when the company was already conducting VIP flight operations. Furthermore, neither Caverton Helicopters Management, nor the flight crew conducted risk assessment of this VIP flight to identify associated hazards that may pose safety risk to the flight, taking into account that the intended landing site at Kabba was an unprepared, temporary and unlicensed landing site.  Consequently, the safety barriers put in place by Caverton Helicopters did not work, as the required assessments were not done in this instance.

The flight crew encountered a brownout condition during the hover to land, which led to the loss of external visual references, spatial disorientation and loss of situational awareness resulting in a misjudgement of distance and ground clearance, as the flight crew tried to control the helicopter’s movements for landing. The helicopter landed hard and rolled over on its right side.

Perhaps disappointingly the AIB fixate on the failure to follow procedures not that the OM A procedure was neither trained or, due the crew’s normal offshore operations, routinely practised.

…initiated numerous improvements to the training programme, introduced a requirement for brownout training (recognition, avoidance and recovery from brownout conditions), reviewed the stabilized approach and un-stabilized approach procedures including amendments to the Operations Manual Part A, Sections 8.17.7.21 and 8.17.7.22. In addition, Operations Manual, Part A, Section 13 was amended with regard to brownout conditions, the conduct of reconnaissance flight, new helicopter landing sites and night operations.

The Caverton recommendation remains open until the NCAA approved the OM Part A change.  One additional action taken following the internal SMS investigation was that two additional barriers associated with “Challenging airfield flight conditions” were added to the FATO BowTie.  Its not stated if these were embedded in training or procedures.

On 30 July 2020 an emergency service AS350 in Brazil (PR-MJX) impacted a building while making a brownout landing: VIDEO