On 25 March 2018 ATR 42-500 F-GPYF of HOP! flew from Paris-Orly to Aurillac.  At top of descent the 15 kg left Main Landing Gear (MLG) door separated from the aircraft, impacting and damaging the left-hand wing/body fairing.  The aircraft was able to make a safe landing. 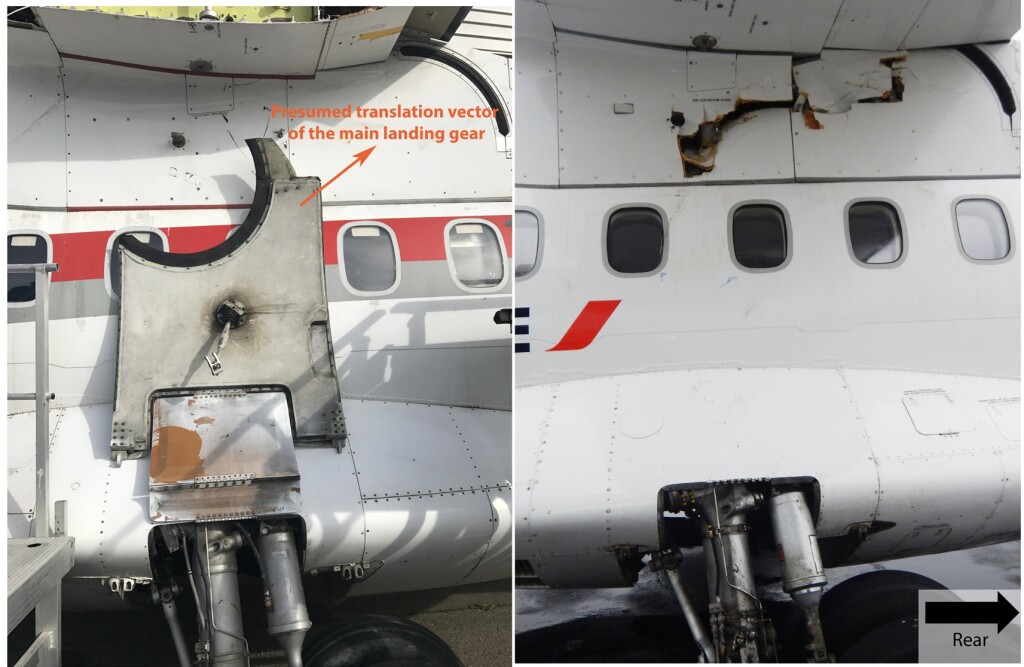 …of the aeroplane’s left MLG door made it possible to establish that the nut of the door’s rear hinge assembly had unscrewed in service before coming off. 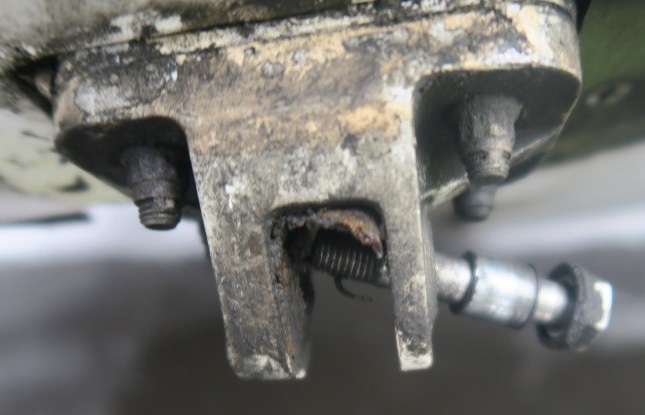 The screw then moved backwards which allowed the male hinge to come out of the female hinge resulting in the landing gear door being slightly misaligned with the fuselage. 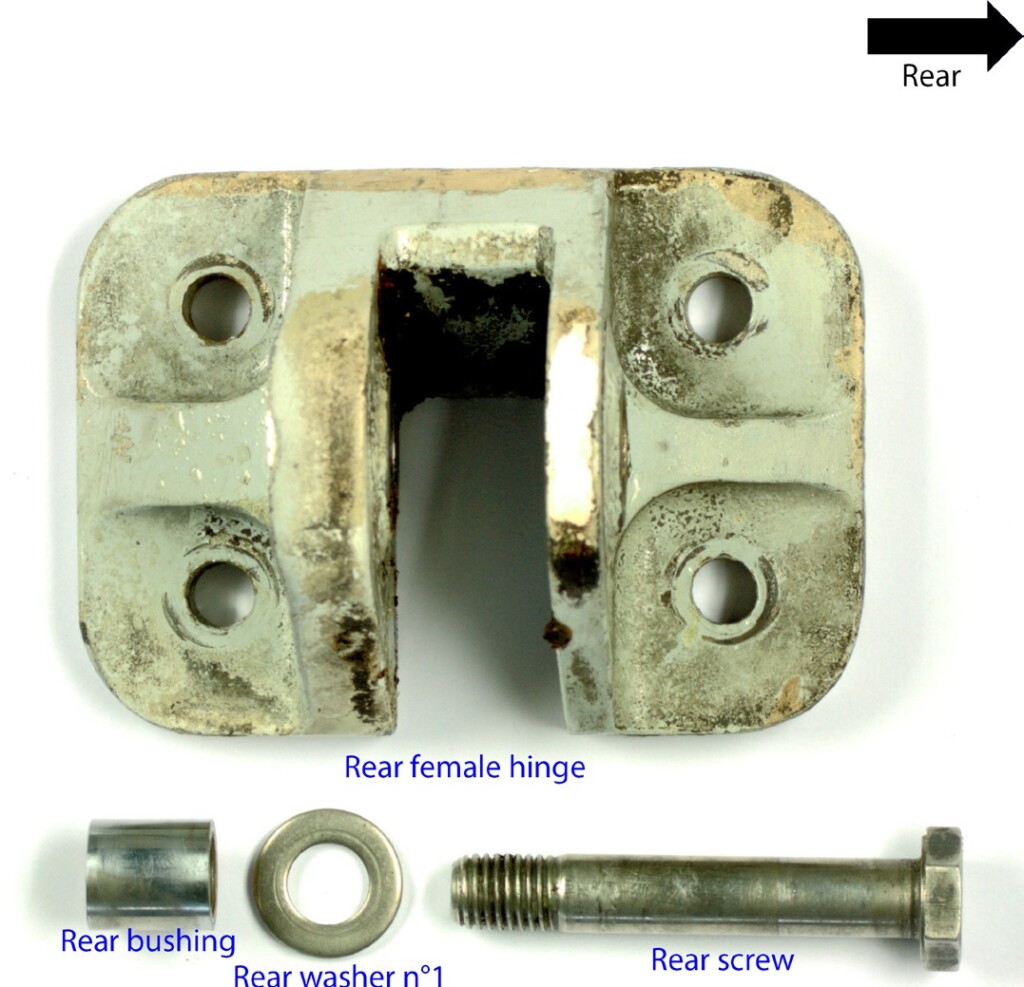 This misalignment increased the aeroplane’s drag.

The analysis of the FDR data found that the increased drag and thus the misalignment of the door was present at least from the first level flight at FL110 and that it probably did not exist on the previous flights.

This abnormal position of the door also resulted in additional loads on the other landing gear door attachment points, in particular the link which failed under fatigue at the start of the descent. 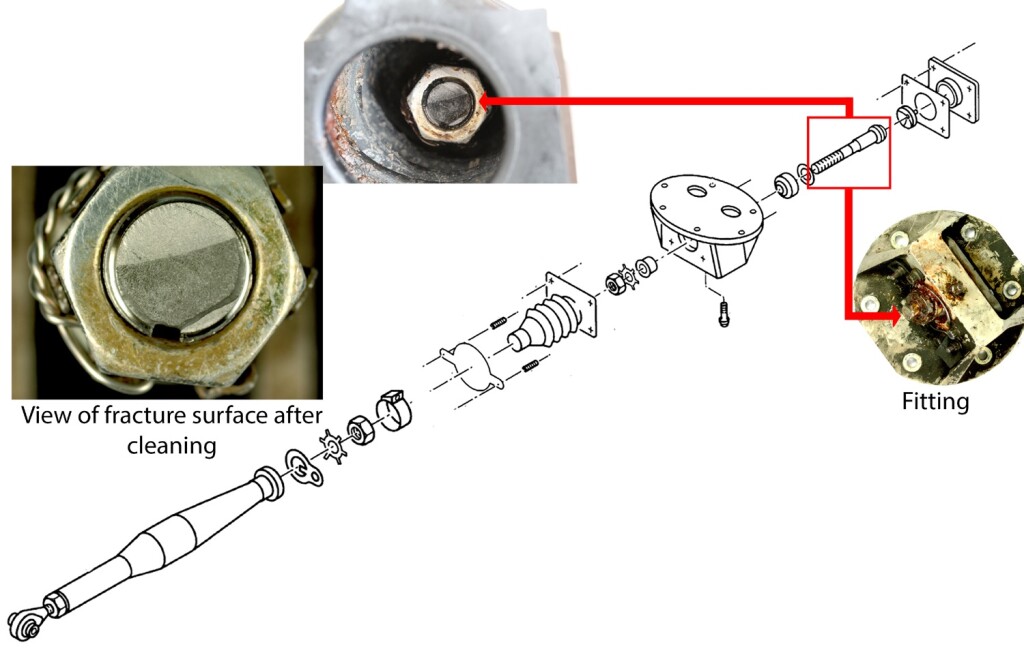 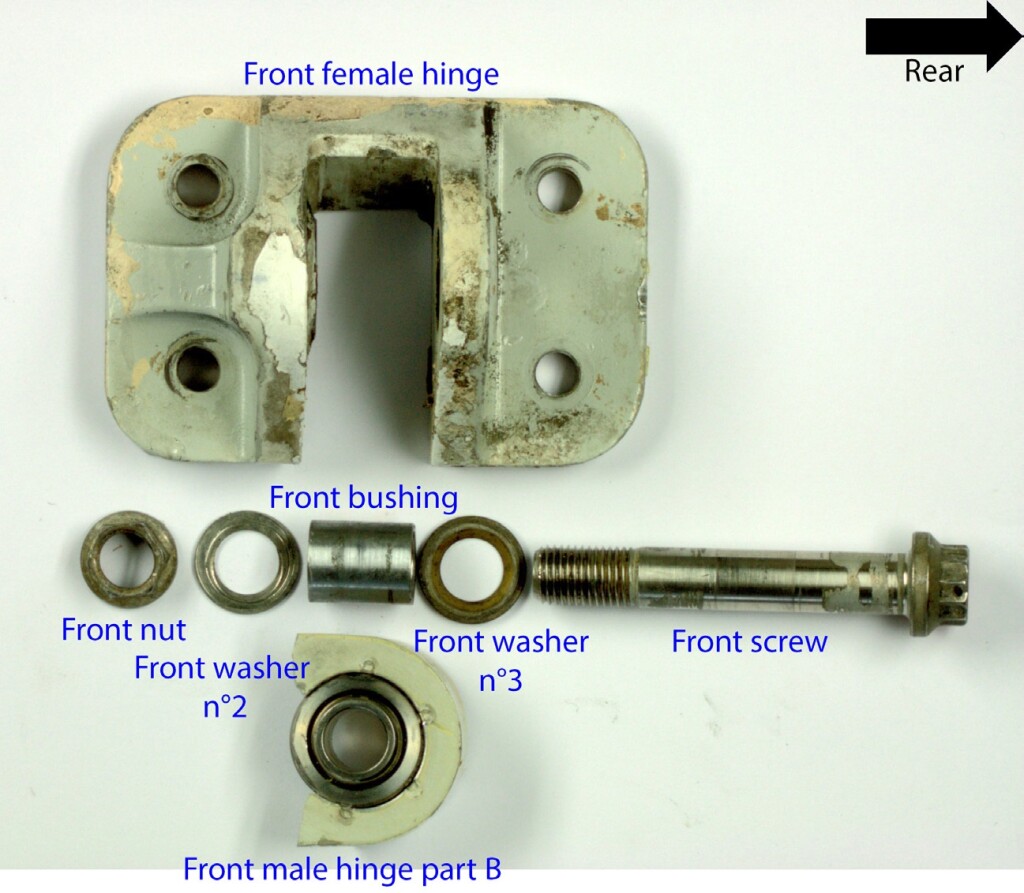 Once the three main attachment points were no longer effective (link, front hinge assembly and rear hinge assembly), the door swung upwards around hinge No. 1 and struck the fuselage and window. This situation generated the noise heard and jolt felt by people on the plane followed by the failure under overload of this same hinge.

The door then separated causing: 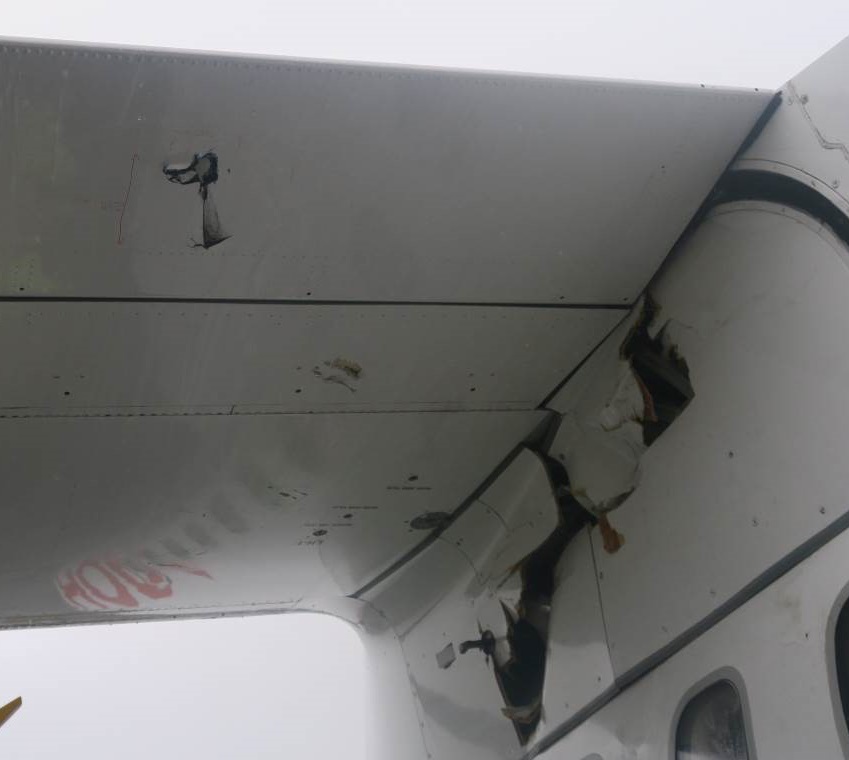 The BEA note that:

An occurrence in 2013 reported by ATR showed significant similarities… [M]aintenance had been performed on the landing gear doors shortly before the occurrence and that the job card had only been partially applied because of a shift change while the task was being performed. This could have resulted in some of the nuts on the landing gear door hinge assemblies not being tightened. 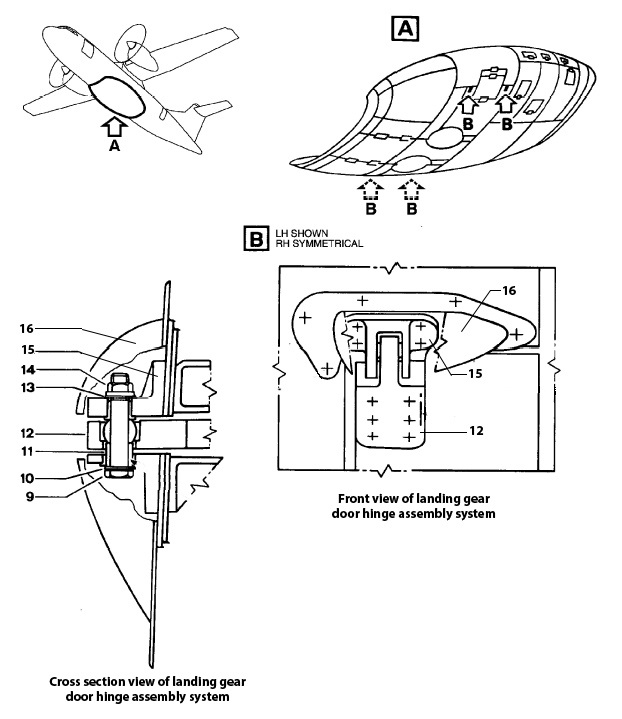 Although the hinge assemblies of the main landing gear doors are not considered as critical parts, these two occurrences show that the simple loss of the nut from the rear hinge assembly can result in the loss of a main landing gear door weighing around 15 kg leading to risks for the aeroplane and also constituting a danger for people and infrastructures on the ground which cannot be ignored. 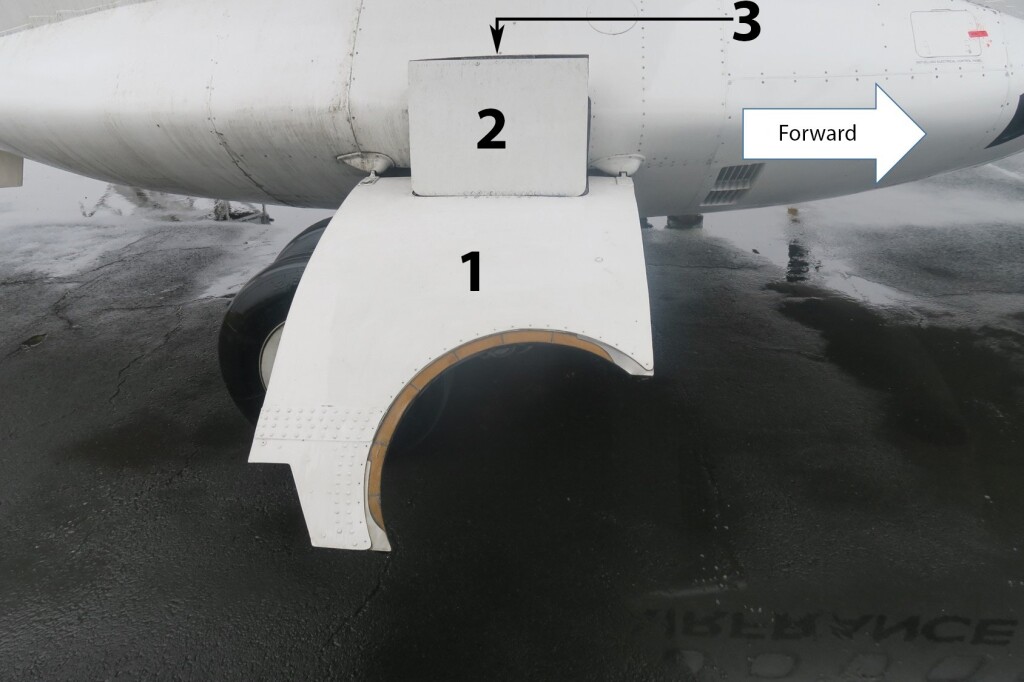 There is sadly often over-enthusiasm for assuming maintenance errors have occurred due to a ‘Failure to Follow Procedures” (FFP), obsessing on classifying how and why personnel ‘violated’ those procedures and applying crude culpability decision aids.  This case study shows that approach is very misguided in limiting the potential for holistic systemic improvement.

Fortunately, the “sole objective” of BEA safety investigations aims “at improving aviation safety [and] does not presuppose the existence of a misdemeanour or a crime”.  This investigation therefore did not fall for the biases that can occur in relation to procedures.

Factors That Could Lead to Loss of the Nut

The BEA explain that…

…given the analysis of the manufacturer’s maintenance documentation, the results of the inspection of the operator’s fleet and the examination of the three other F-GPYF nuts which were recovered (nut from the front hinge assembly of the left main landing gear door and nuts from both the front and rear hinge assemblies of the right main landing gear door), the investigation brought to light several factors which, individually or together, might have potentially contributed to the unscrewing of the nut.

The mechanical performance of a screwed joint depends on multiple parameters defined during the initial design. The change of one of these parameters may compromise the design. However, the actual impact…could not be quantified…

First, the investigators considered the design of the nut:

Examination of the fasteners of the HOP! ATR 42 fleet found that around 50% of the nuts (and in particular the three nuts from the hinge assemblies of the left and right main landing gear doors of F-GPYF which were recovered) did not correspond to the material specified by ATR during the initial design of the assembly.

During the investigation, it emerged that there were differences between the configuration specified by ATR during the initial design of the hinge assemblies of the main landing gear doors and the alternatives authorized by the maintenance documentation. In fact, errors in transcribing standards and/or the omission of information in various documents (SRM, AMM, SPET), meant that it was possible to choose unsuitable alternative P/Ns.

The nut whose loss triggered the occurrence was not recovered and the BEA were unable to determine when it was installed or which P/N it was, however…

The hypothesis of an unsuitable nut cannot, however, be excluded given the number of unsuitable nuts on the rest of the HOP! ATR 42 fleet and the characteristics of the three remaining nuts on F-GPYF.

Secondly, in relation to the application of tightening torque, this…

…is an important factor in the mechanical performance of a screwed joint. It must be sufficient to guarantee that the fastener is correctly secured with respect to the loads applied to the system without, however, exceeding the mechanical characteristics of one of the assembly components.

At the date of the occurrence, the tightening torque was not available on the job card…for the installation of the gear doors. It was thus necessary to search for this information in the manufacturer’s generic documentation (in particular in the AMM and SRM).

Information to determine the tightening torque to be applied based on this generic documentation was missing. In addition, there were errors in the documentation in question.

Interviews carried out with the mechanics in the Part-145 HOP! and RAS [Hop! supplier Rheinland Air Service] maintenance organisations revealed that these assemblies were not identified as being critical. In  addition, given that the tightening torque was not indicated in the job card, few mechanics had looked for the tightening torque to be applied in the ATR documentation.  In practice, they generally tightened the nuts by 45°.

The BEA conclude that…

…given the complexity of the documentation, the perception of the assemblies as having a low criticality level, and the discrepancy between the possible tightening torque ranges, it is probable that an unsuitable tightening torque was applied to the nut of the left rear hinge assembly on F-GPYF.

Thirdly, BEA considered in the nut itself was defective.  This might occur due to production defects:

As indicated by EASA in its document CARI 20-01 ([reproduced in Appendix 6 of the BEA report], certain batches of procured nuts complying with the standards NASM21042, MS21042 and NAS1291 can have defects which can lead to their failure.

[I]t cannot be excluded that the three remaining nuts of the hinge assemblies of the main landing gear doors on F-GPYF corresponded to standards NAS1291 or MS21042.

Alternatively it could occur due to reuse of these self-locking nuts:

The purpose of the self-locking function, a mechanical safety device chosen by ATR for these fasteners, is to impede the nut from unscrewing under transverse loads to the screw’s axis and/or vibrations. Each time this type of nut is used, the self-locking torque decreases with the number of tightening/untightening operations.

At the time of the occurrence, the ATR documentation did not include any specific indication about checking the self-locking capability before reusing this type of nut. It could be reused if it met the visual inspection criteria applicable to all nuts, but a failure of the self-locking function cannot generally be detected by this type of inspection.

Inspection of the Hinge

On the detection of an unsuitable nut:

[T]he fairings protecting the hinge assemblies of the landing gear doors had to be removed in order to be able to check the nuts. However, even when the fairings are removed, it is still difficult to determine if the nut in place is the one wanted, due, in particular, to the absence of any marking on the nut. Thus, once an unsuitable nut is installed on the plane, it becomes very difficult to detect the error during later operations.

On the detection of nuts unscrewing:

Partial loosening or unscrewing of the nut does not result in the immediate loss of the hinge assembly’s functionality (pivot link to open and close the door), this can in fact occur several years later as the incident to F-GPYF shows. Conversely, once the nut has been lost, the door may separate from the aeroplane in the relatively short time of a few flights.

At the time of the occurrence, only the removal of the fairings during maintenance operations would allow an agent to see whether the hinge fastener was loose. The frequency of these operations (in particular, every nine years or 20,000 landings for the removal of the landing gear) and the perception of their criticality meant that the possible progressive loosening of the nut on F-GPYF was not detected.

The following combinations of organisational factors and human factors may have contributed: 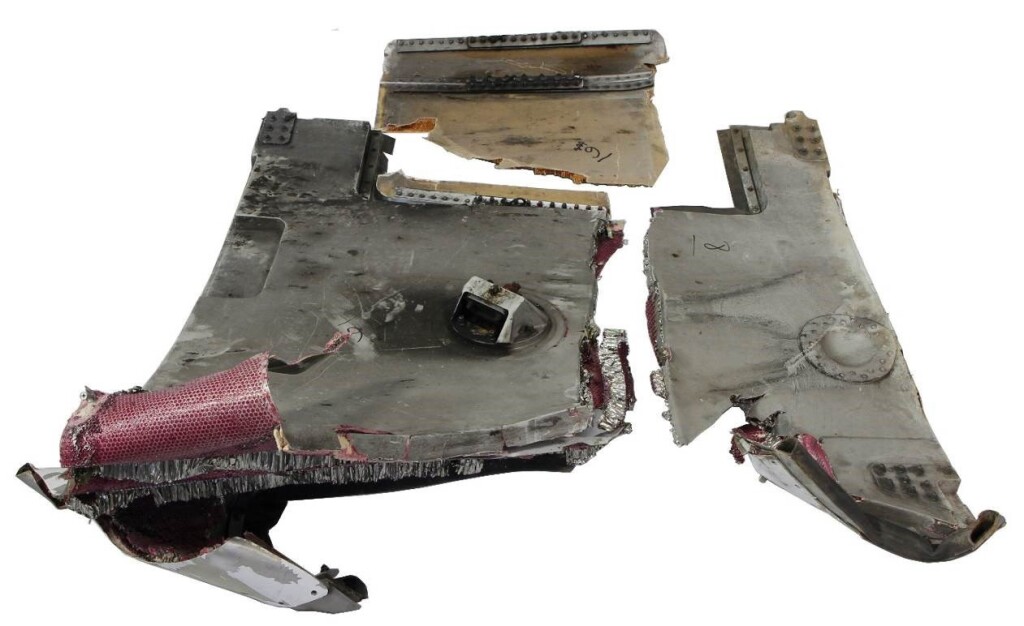