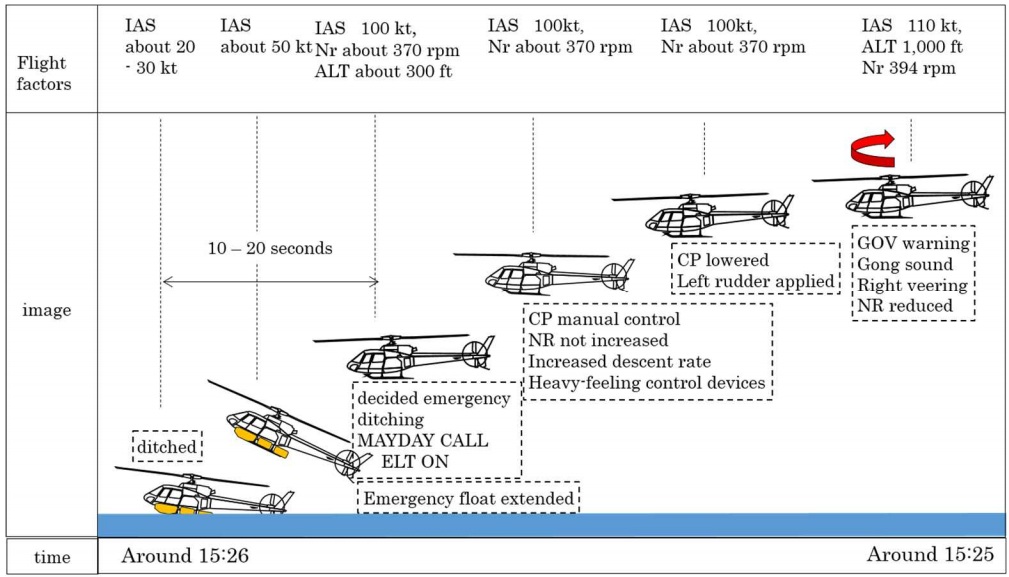 The Japan Transport Safety Board (JTSB) explain in their safety investigation report that while in cruise at c 110 kt and 1,000 ft at around 15:25 the pilot heard a warning ‘gong’, the engine governor light (GOV) illuminated and the pilot had to counter a right yaw.  Main rotor speed (NR) also reduced.  The pilot disengaged the autopilot (AP) and slightly lowered the collective pitch (CP) lever in an attempt to maintain NR.

After confirming that NR indicator showed around 370 rpm in warning control range (yellow arc line: between 320 and 375 rpm), the pilot operated emergency control in case of governor failure. The pilot shifted the twist grip to manual operation and turned it to the left; however, the pilot was unable to position NR in normal control range (green arc line: between 375 and 394 rpm), and the altitude of the helicopter kept going down.

NR stabilised at around 370 rpm.  The pilot felt the flying controls had become heavy,”as in the case that hydraulic system was off”. 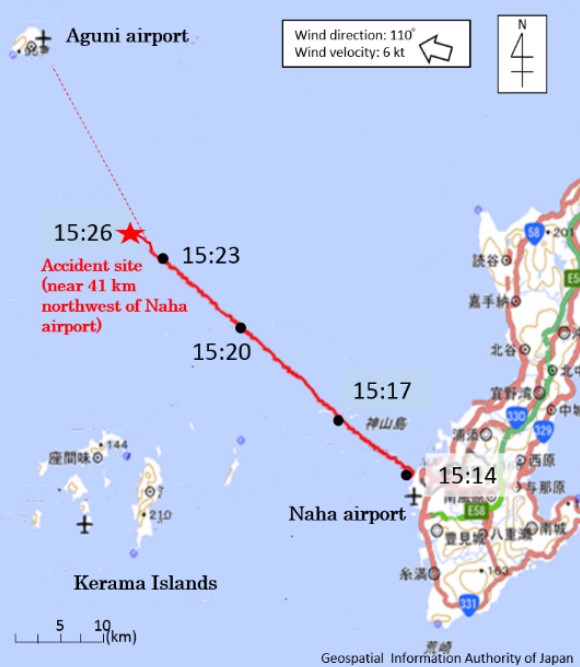 The pilot [3,474 flight hours total time, 1,887 hours on type] had not experienced [practical] training of emergency control for the case of governor warning light failure, and had [only] verbally confirmed the procedures simulating the failure in regular training.

The pilot turned the twist grip only to the left paying attention to avoid an excessive NR, but was unable to increase NR. Because the helicopter did not stop descending and came as close as about 300 ft to the sea surface, the pilot made a decision to ditch at this time.

At 15:25:30, the pilot sent [a] distress message and manually activated emergency locator transmitter (ELT). The pilot thereafter strongly pulled the cyclic stick to decelerate for ditching and [deployed] the emergency floats at about 50 kt.

The helicopter came near to the sea surface in 10 to 20 seconds after sending the distress message, and ditched at the speed of 20 to 30 kt without performing a sufficient deceleration.

The helicopter immediately sank to the level of the pilot’s seat.

The pilot unfastened shoulder harness and seat belt while dipped in the sea, escaped from the helicopter without putting on a life jacket [which was stored under his seat].

The pilot initially held on to an EFS float bag to await rescue.  Fortuitous a SAR helicopter of the Japan Air Self-Defense Force was exercising near-by and it…

…received the distress message, arrived near the accident site around 15:39 and found the pilot on the sea. The helicopter had already sank in the sea at this time. The pilot was rescued by the rescue helicopter and was taken to the hospital in the city of Naha via Naha airport around 16:20. 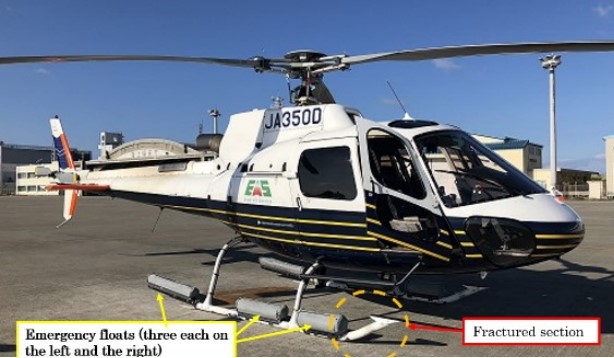 From around 17:22 till around 19:00, a patrol ship of Japan Coast Guard gathered floating wreckage [including a cowling, baggage bay door, float bags, raft, part of a skid and cabin debris]. 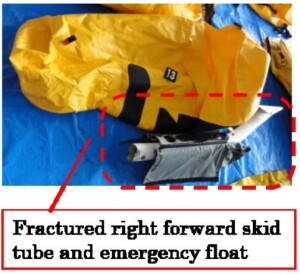 Japan Coast Guard did not receive an ELT signal from the helicopter.

The JTSB Safety Investigation and Analysis

From the maintenance history of the helicopter and the statement of the pilot, it is probable that the helicopter did not have any abnormality until GOV warning was activated.

It is somewhat likely that the engine of the helicopter was not shut down, but was under low output condition….

…in the event of malfunction of low pressure pump or high pressure pump in Pump and Metering Unit Assembly, it is probable that the engine output is reduced and veering to the right occurs due to reduced fuel flow.

It is somewhat likely that the engine output did not follow manual operations of the twist grip because the malfunction hindered sufficient adjustments of fuel flow.

JTSB could not confirm the cause of the power loss because neither the wreckage nor the engine data could be salvaged.

It is probable that NR was not recovered to the normal operation range and the altitude of the helicopter was lowered although the pilot commenced emergency control after GOV warning of the helicopter.

It is probable that the pilot continued operating the twist grip for emergency control maintaining an air speed of about 100 kt based [as] NR was stabilized at around 370 rpm after GOV warning light was illuminated.

It is somewhat likely that unsuccessful recovery of NR by the pilot was attributable to the malfunction of the fuel flow system, which prevented NR from following, although he turned the twist grip only in the left direction paying his attention to a possible excess of NR. Besides, it is somewhat likely that the engine output was insufficient to…restore NR.

In the event of failure of fuel flow function of engine, it is important to give the highest priority to the control in accordance with flight parameters, to properly judge increase or decrease of NR, and to get familiarized with manual control of emergency control throttle.

The JTSB could not determine why the CP and the cyclic stick became heavy during the descent.  Possibilities include that”the trim release switch was not turned off when AP was switched off…which caused load of trim actuator in Artificial Load System to remain”, “an aerodynamic affect associated with the change in attack of angle of the main rotor blades”, or a hydraulic system failure.

On the ditching and survivability matters:

[T]he helicopter ditched at an air speed of 20 to 30 kt and at an excessive descent rate. Due to this, it is highly probable that the helicopter sank in the sea with the Emergency Floata and airframe damaged.

…it is necessary that all of crew members on board wear life jackets when helicopters fly over the sea beyond autorotation distance from the land because it is predicted that a stable ditching is difficult to perform in the event of emergency ditching, and time for evacuation and space for wearing life jackets are limited.

In this accident, it is probable that NR of the main rotor was reduced during the flight and flight altitude became unable to maintain, which led to ditching at the excessive speed and descent rate and caused damage to the airframe, followed by sinking. It is somewhat likely that the reduced NR of the main rotor was caused by some kind of malfunction occurring with engine system; however, it could not be determined in which section of the engine malfunction occurred and what caused it.

After the accident, the operator has implemented the following: