On 23 March 2019 privately operated Robinson R44 helicopter LN-OGF crashed into trees during an attempted aurorotation after an engine power loss at Stavnes in Telemark, Norway.  The Norwegian Safety Investigation Authority (NSIA) explain in their safety investigation report (issued 18 September 2020) that while en route at 1805 Local Time, the pilot…

…noticed that he was losing engine power. An attempt to autorotate from an altitude of about 800 ft failed. The rotor stopped completely, and the helicopter dropped vertically along the trunk of a 30-metre fir tree. 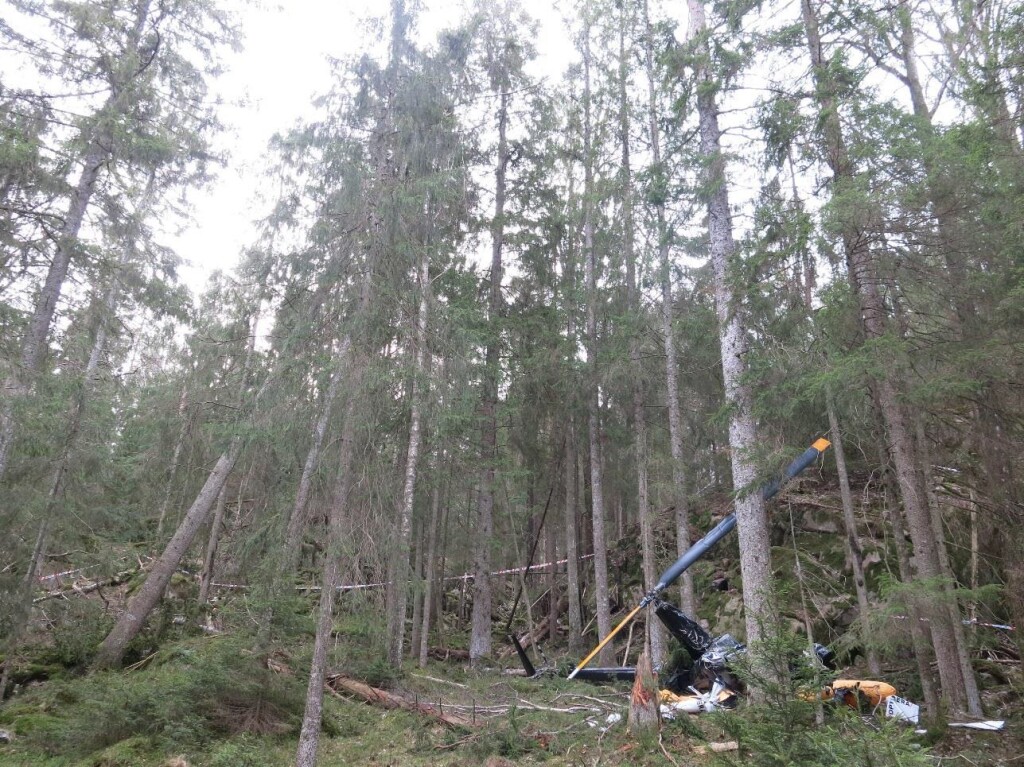 Robinson R44 LN-OGF: The accident site seen toward the southwest. The 30-meter tree that was knocked sideways is shown to the left in the picture (Credit: NSIA)

The branches cushioned the impact somewhat, but both people on board were severely injured and the helicopter destroyed.

The Accident Flight and Precursor Events That Day

The helicopter was privately owned and routinely rented out to private pilots.  The NSIA investigation led them to examine an earlier flight that day.

A pilot who had rented the [same] helicopter earlier that day…felt a thud in the helicopter during a slight climb, 3–4 minutes after take-off. He compared it to someone slapping the helicopter body with a flat hand. In retrospect, the first pilot could not say whether this affected the helicopter because he instinctively lowered the collective control lever and immediately started to turn the helicopter back 180°. All instruments showed normal values after the thud.  During a slight descent on his way back to the farm, he felt another thud from the helicopter. It was weaker this time and he did still not register any instrument changes. Below was a suitable field for landing and he decided to go into autorotation and land the helicopter in the field. He then called the owner of the helicopter and explained the situation.

Remarkably the pilot of this earlier flight did not have access to the aircraft technical log and so was unable to make an entry.

Based on the various explanations, it is somewhat unclear to the NSIA what was said and understood by the various parties after this. The first pilot agreed with the owner of the helicopter that he would check the helicopter. If nothing obvious was detected, he would call the aircraft technician who performed maintenance on the helicopter.

At the time, there was also telephone contact between the first pilot and the next pilot [the accident pilot, who NSIA refer to as the ‘commander’]. When the commander heard about the precautionary landing, he drove to the field. Together they checked the helicopter fairly thoroughly.  Nothing unusual was detected.

Again it appears nothing was entered in the technical log as the two pilots nor does NSIA explain what competence the two pilots had to conduct maintenance inspections.

The first pilot contacted the aircraft technician at 1615 hours. According to the aircraft technician, the first pilot had explained that he had experienced a drop in rpm. The technician was busy and could not inspect the helicopter until the following day. He has explained to the NSIA that he “placed a flight ban on the helicopter.” He indicated that there might have been a problem with the freewheel, but other than that could not help establish what might have been wrong with the helicopter.

The commander did not perceive that the aircraft technician or the owner had banned operation of the helicopter.

He started the helicopter and lifted it into hover, while the first pilot was observing. The commander did not notice anything abnormal and after a few minutes he flew the helicopter back to the farm. There, he conducted several landings, including an autorotation, before completing a final landing following a 18 minutes flight.

At 1703 hours, the first pilot called the aircraft technician and told him that the commander had taken off with the helicopter.

In retrospect, the first pilot explained to the NSIA that he also did not have the impression that the aircraft technician had grounded the helicopter. He was in doubt as to what had happened to the helicopter, but did not think it was right to stop the commander from proceeding with the flight.

The accident flight commenced at 1740.

Heading north, during a slight climb at an altitude of 800 ft and a speed of 80 kt, the commander noticed something happening to the helicopter. He has explained to the NSIA that it felt like the engine suddenly had to work harder. Glancing at the carburetor temperature, the commander saw that it was in the green range. He noticed that the manifold pressure was increasing toward 18 in.Hg, that the rotor speed was dropping and that the low rotor RPM warning sounded [indicating a drop nelow 97%].  The commander described the experience as driving a car uphill in third gear and then by accident putting it into fifth gear. The engine did not provide sufficient power.

The commander…lowered the collective control lever and pulled the cyclic control lever toward him to put the helicopter into autorotation. He realized that the rotor RPM was dropping despite his attempt to put the helicopter into autorotation.  He then noticed that the helicopter started rocking as the main rotor was about to stop. He saw that the best option would be a tall fir tree forest…and decided to make an emergency landing there, almost straight ahead.  He thought that the fall would be higher if he attempted to land in a field to his left, or on the sea to hisright. As he approached the trees, he pulled the cyclic toward him to raise the nose of the helicopter.

The helicopter first hit some small branches before coming to a sudden stop. It then started to fall toward the forest floor.  The commander was surprised that the impact with the ground was not harder. After the helicopter had come to a stop, it was quiet. The only sound was some beeping from the emergency locator transmitter [a Kannad 406 AF-H], which had activated.

The commander’s friend in the left seat was injured and unconscious. The commander managed to get his friend out of the wreckage and cleared his airways. He then called the emergency number 113. The Norwegian Air Ambulance app was used, but according to the commander there was an initial misunderstanding as to where the crash had taken place. 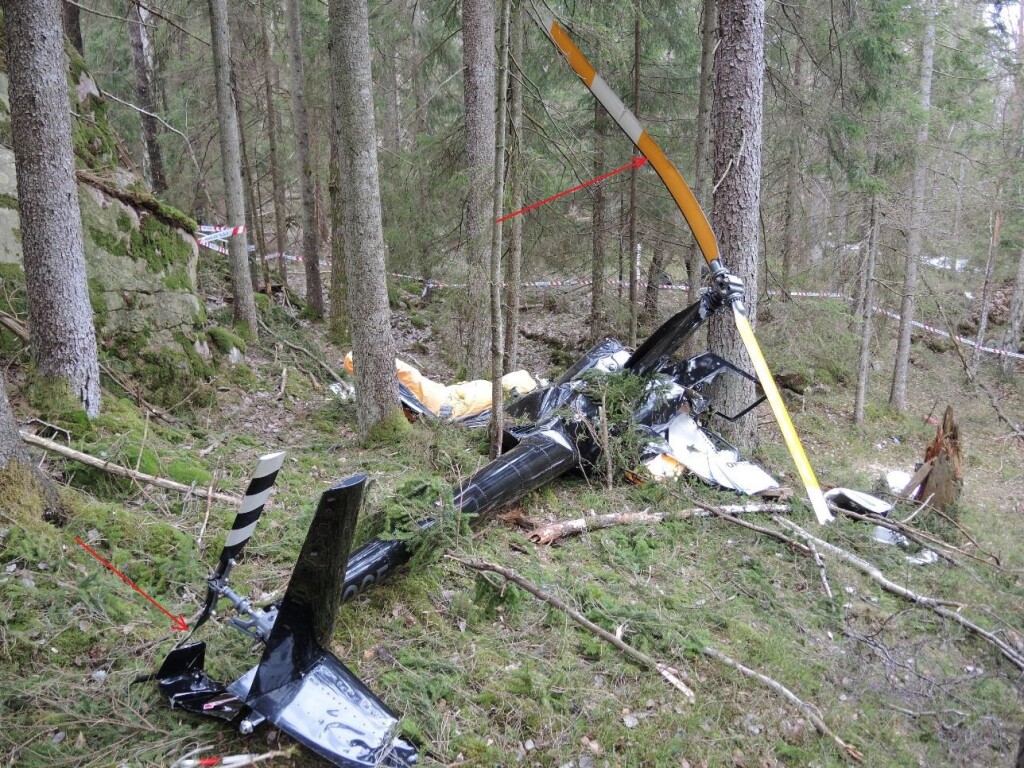 The helicopter wreckage was lying partly on its belly, slanting to the right. The righthand landing gear had been knocked off and the entire fuselage was to a varying degree deformed and crushed.

An air ambulance helicopter arrived overhead at 1843 but was unable to land due to the trees.  At 1848 a military Westland Sea King arrived and hoisted down a rescuer almost at the same time a ground party arrived.  The two occupants were transferred to hospital by Sea King.

NSIA explain that the helicopter was not equipped with any data recording equipment.

Most likely, the spark plug loosened because insufficient torque was applied during installation in connection with a 100-hour inspection conducted in November 2018.

The aircraft technician has explained to the NSIA that the 100-hour inspection was conducted with assistance from an external person. He consequently put particular emphasis on performing the work in a systematic and controlled manner. He has stated to the NSIA that he was 100 percent sure that the spark plugs and ignition harness were correctly installed when the helicopter left the hangar in November 2018. Thus the technician suggested that somebody else must have worked on the spark plugs later on if anything was not installed properly.

Most likely, problems with cylinder no. 5 also caused the aborted flight earlier in the day.  The bangs or thuds that the first pilot experienced may have been caused by a short moment of pre-ignition, which did not show up on the instruments.  A contributing factor to the phenomenon’s sudden stop may be that the first pilot instinctively lowered the collective, thus reducing the load on the engine and stopping a potential pre-ignition.

…the helicopter, after having landed in the field earlier in the day, should not have been operated until the cause of the aborted flight had been determined.   Good airmanship would have been to postpone the flight until competent personnel had released the helicopter for flight.

When a pilot experiences a situation serious enough to warrant aborting the flight and landing the aircraft in a field, there must be a high threshold for continuing to operate the same aircraft before the cause has been sufficiently determined.

During the situation in question, it may seem as if communication was inadequate and that responsibilities were vague.  Generally, all incidents that can affect airworthiness, as well as any suspected technical faults, should be documented in the aircraft flight log.  An entry in the flight log’s section for remarks and actions would have formalized the incident and raised the threshold for continued operation of the aircraft.

The commander only had a few seconds to act after the engine started to lose power.  When noises in the helicopter change, it will normally take some time before the pilot understands what is happening.  The low RPM warning horn may have been what made the commander aware of what was about to happen.  At that time, the RPM had most likely dropped to below 97%.  An attempt to increase engine power by adding more throttle would not have helped as long as the engine was already delivering insufficient power. The only action that could have limited the loss of rotor speed was a rapid lowering of the collective, or moving the cyclic back. If the RPM drops below a certain value, around 80%, it will be impossible to increase the RPM again, even with engine power. The fact that the rotor stopped completely may indicate that the commander did not managed to take the necessary action in time.

The R44 has a rotor system with relatively limited kinetic energy, which means it is particularly important to react quickly. The helicopter was loaded beyond the maximum permitted limit [by 26 kg].  This may have contributed to the speedy drop in rotor RPM. The strong wind in the area may also have caused turbulence over the peninsula, which may have made the situation worse.

NSIA believes that the emergency landing in the forest was decisive for the survival of the two people on board. 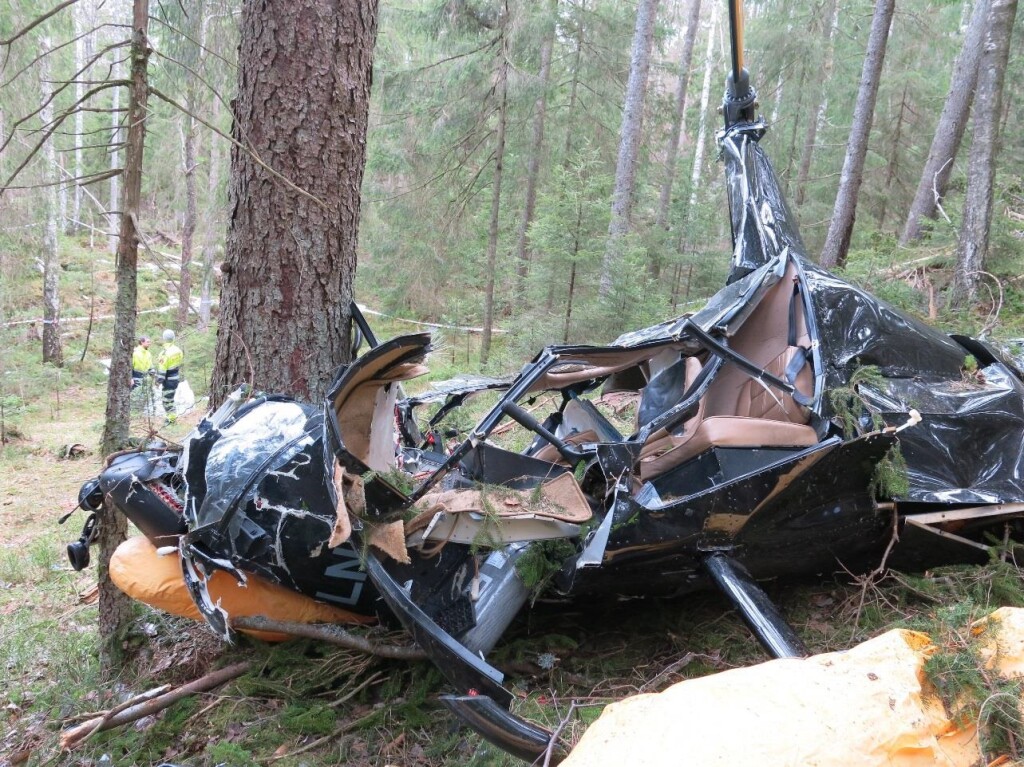 The helicopter hit a few meters down on the trunk of a 30-meter tall fir tree, and the impact was hard enough to break the tree in two places and knock it sideways. The tree slowed down the horizontal speed before the helicopter hit the next 30-meter tall fir tree and slide along this to the ground. The velocity was significantly reduced by branches as it fell toward the ground along the tree trunk.  The relatively low fall velocity was the direct reason it was possible to survive the accident. A free fall from approx. 30 meters altitude would most likely have been fatal.

The investigators also favour the wearing of helmets.

A demanding situation arose when the engine lost significant power during flight. The commander did not manage to enter autorotation before the rotor RPM dropped too low.  High mass and strong winds might have been contributing factors.  As the rotor RPM dropped, the commander tried to make an emergency landing, but the rotors stopped completely before the helicopter hit two fir trees and fell to the ground.