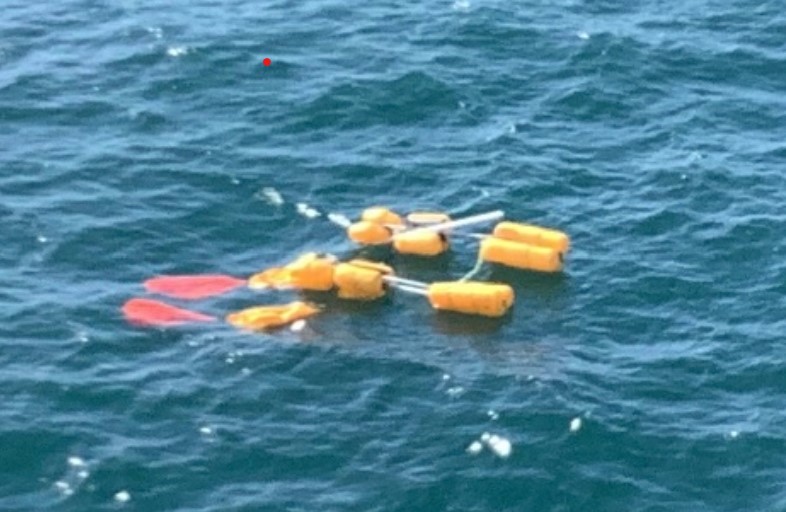 On Friday 13 January 2023, the US National Transportation Safety Board (NTSB) issued their preliminary report into this offshore helicopter accident. 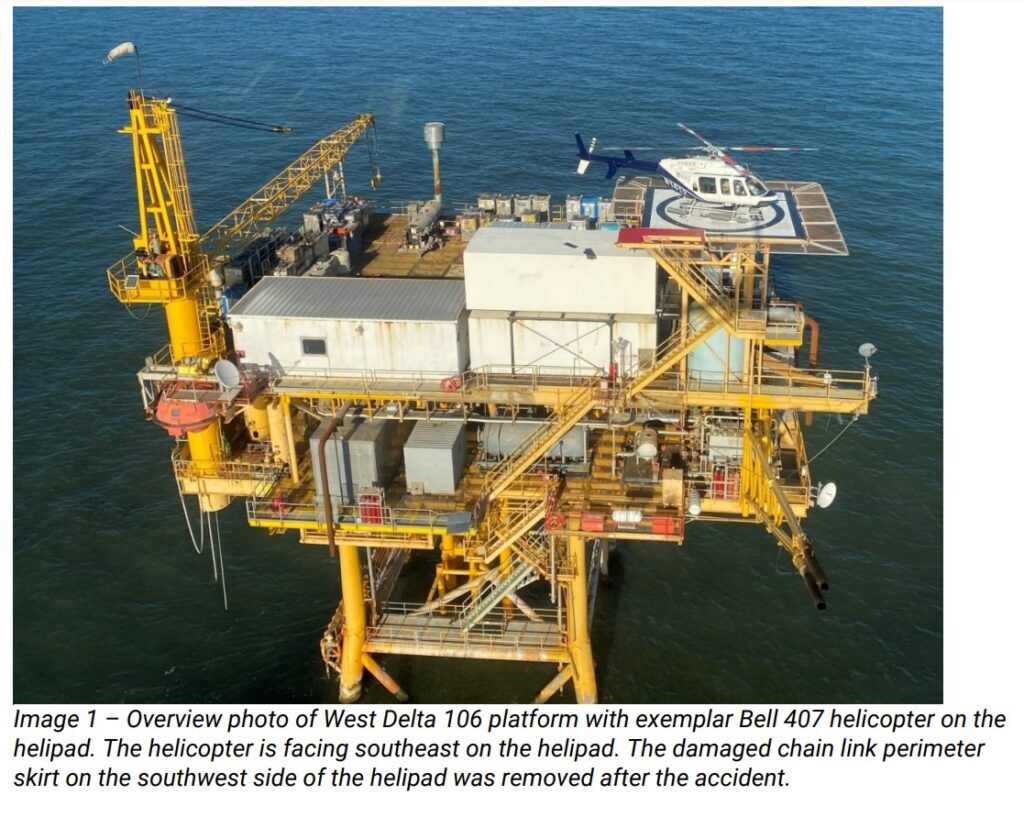 The helicopter landed at 08:25 positioned on the helideck facing SE. The 4 passengers disembarked and 3 returning passengers, employed by Island Operating Company, boarded shortly after, having had a handover discussion with the incoming personnel.

There were no eyewitnesses or surveillance video of the helicopter’s departure from the WD106 helipad; however, there were several individuals who reported hearing the helicopter operating while on the helipad.

Although, the NTSB don’t comment, this lack of witnesses is because the helideck was being operated without a Helideck Landing Officer (HLO) & Helideck Assistants (HDAs) and therefore without fire & rescue cover.  This sub-standard practice is common on small GOM installations.

These individuals noted that the helicopter’s engine continued to run after it landed on the helipad, and that they heard the engine noise increase for takeoff and then the sound of items hitting the platform.

They immediately went outside and saw the helicopter fuselage floating inverted in the water with the tail boom separated but adjacent to the fuselage. The landing skids were separated from the fuselage and the emergency skid floats were inflated.

Several individuals on the platform then boarded and launched the platform’s emergency escape [freefall enclosed lifeboat] capsule, but the helicopter fuselage sunk before they could render assistance to the four occupants who remained inside the fuselage.

The US Coast Guard (USCG) were notified but curiously, despite the NTSB reporting the installation’s crew being aware the helicopter crashed alongside and early social media posts confirming the USCG were aware this was a take off accident, the USCG “searched approximately 180 square miles for 8 hours”. 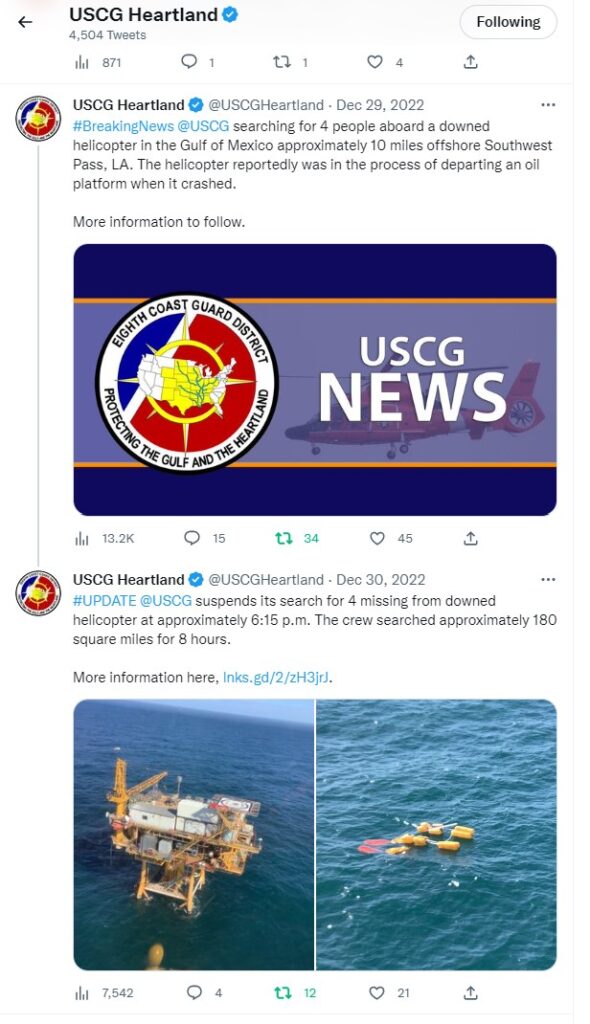 It was announced on 4 January 2023 that the bodies had been recovered. 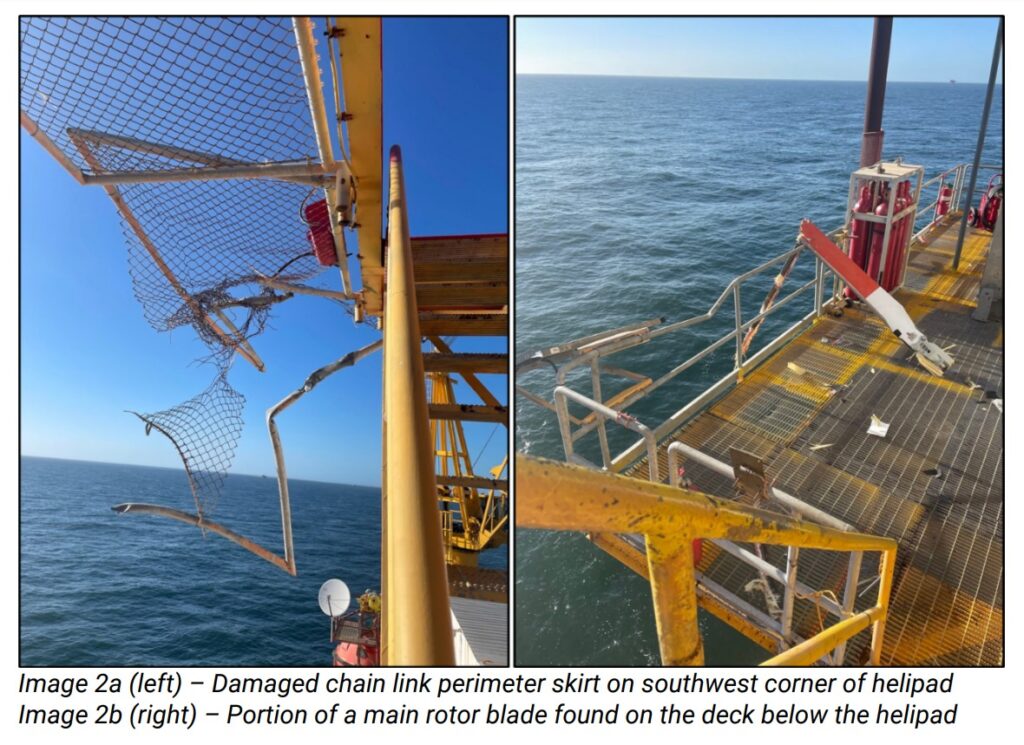 The light’s blue glass globe was shattered, and shards were found on the deck below the helipad. The remaining perimeter lights appeared undamaged. 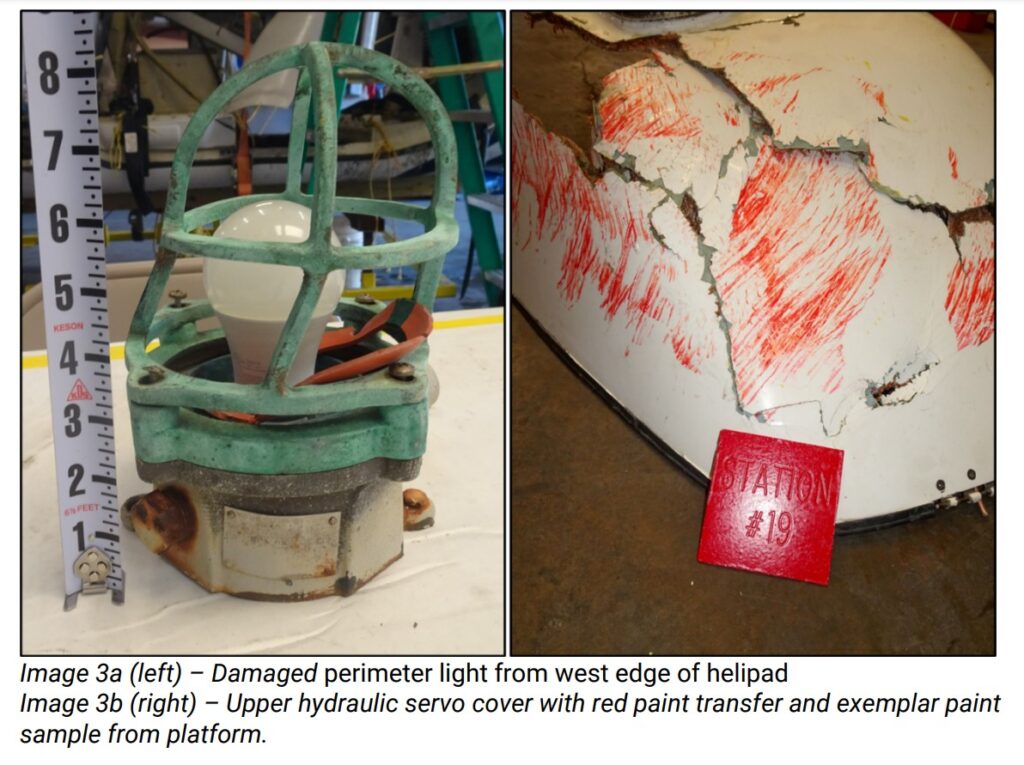 Close examination of imagery released by the USCG suggests the main rotor blade debris was two decks below the helideck. 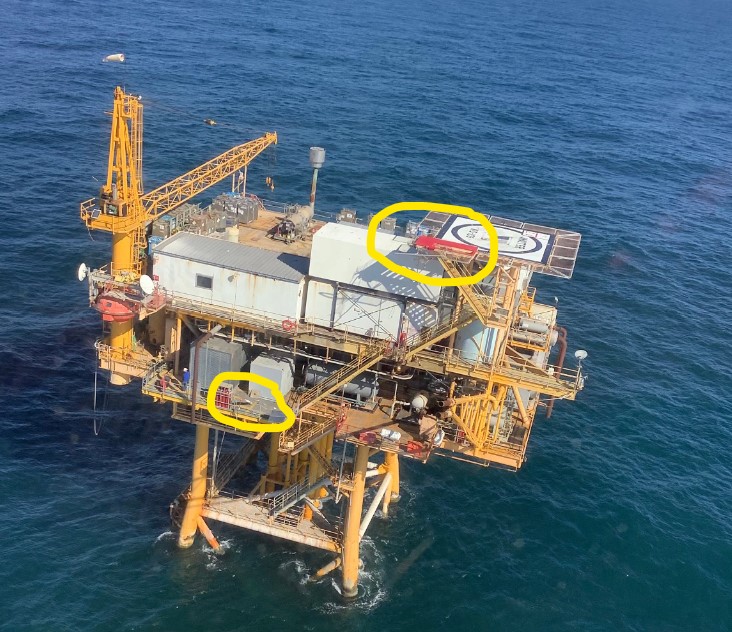 The NTSB don’t comment further but it is noticeable that the upper portion of the helicopter struck the stairwell.

Fragments of tail rotor blades were found on the deck below the helipad.

There is no comment on what the tail rotor may have struck.

There was impact damage to the left landing skid-to-aft crosstube interface.

On 2 January 2023 was the submerged wreckage was located and salvage commenced.

The Engine Control Unit (ECU) has been sent to the NTSB Vehicle Recorder Laboratory for data extraction.  The flight control servo actuators are also to be subject to further examination.  The NTSB note that unfortunately:

We will update this article as the NTSB release further data.

In another case study we examined the 11 December 2008 loss of RLC B206L4 N180AL with the loss of 5 lives and, in particular, survivability issues at low sea temperature and late alerting of rescue services: So You Think The GOM is Non-Hostile?  The sea temperature could be a common issue in the December 2022 accident as cold shock can prevent cabin egress.

We have previously covered the ditching of RLC’s N373RL on 11 November 2012 after a power loss on take off offshore.  The four occupants in that case were uninjured.

We have also reported on an RLC accident on 25 September 2021 where B407 N662RL was lifting off for departure from a heliport in Patterson, Louisiana when and drifted backwards into B407 N668RL.

We would expect a competent safety investigation to consider the operator’s safety management & especially its response to the accident 2 weeks before, the suitability of sub-D decks and single engine helicopter operations, the design standards applied to helidecks, the SAR / emergency response & the survivability aspects and the FAA‘s regulation of offshore helicopter operations & BSEE‘s regulation of offshore installations.