On 27 March 2013, Bell 412SP PT-HUW of Líder Táxi Aéreo suffered an accident on approach to the Petrobras P-07 semi-submersible production installation in the Bicudo field in the Campos Basin off Macaé.

The Brazilian accident investigation agency CENIPA issued their safety investigation report on 29 March 2021, an unimpressive 8 years and 2 days after the accident.  They explain that the helicopter had departed on a c20 minutes inter-field flight from the FPSO Rio De Janerio to the P-07 with two crew and one passenger.  The Aircraft Commander, a former military pilot, had approximately 6000 hours of flight time, 1000 on type.  The Co-Pilot had 1800 hours, 200 on type.

At the time…it was raining, with continuous wind of 360° and 25kt, and clouds at 2,500ft…. On approaching the platform, close to the landing area, the weather conditions deteriorated, impairing visibility.

At the time of the final approach for landing on the P-07 platform, the pilots reported hearing a noise followed by a strong vibration in the aircraft.

The images from the platform camera recorded a flare, with a large pitch up angle, performed by the helicopter however, on an interview; the pilot did not manifest having performed such a maneuver. 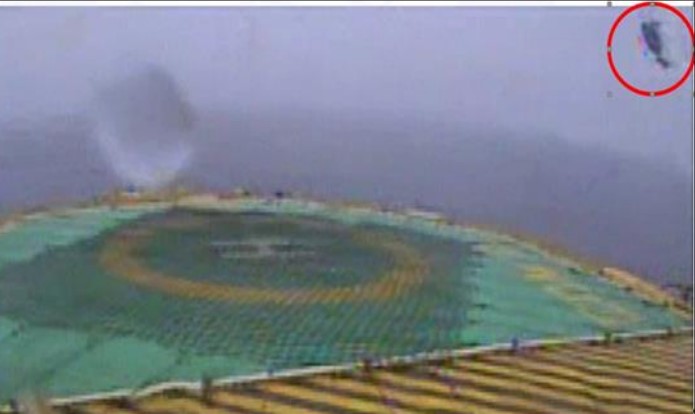 Sudden Pitch-up of Lider B412 PT-HUW on Approach to Petrobras P-07 (Credit: via CENIPA)

The maximum intentional pitch up is limited to 30º in the Bell Rotorcraft Flight Manual.  While not clarified in the report, we believe the Aircraft Commander was the Pilot Flying.  CENIPA do not report any interview feedback from the Co-Pilot (who would therefore have been Pilot Monitoring), nor is there any further analysis of the video recorded.

Afterwards, the crew made a right turn, aborting the landing and starting a descent for emergency landing [ditching] in the water.

The impact occurred with low rate of descent and low speed of horizontal displacement.

This suggests a controlled ditching was achieved rather than a more severe water impact.  CENIPA note the sea was “rough”, though no numeric scale was given.  On contact with the sea the helicopter immediately rolled over  and the main rotor blades struck the water.  The emergency flotation system reportedly activated automatically, and the aircraft remained floating inverted. 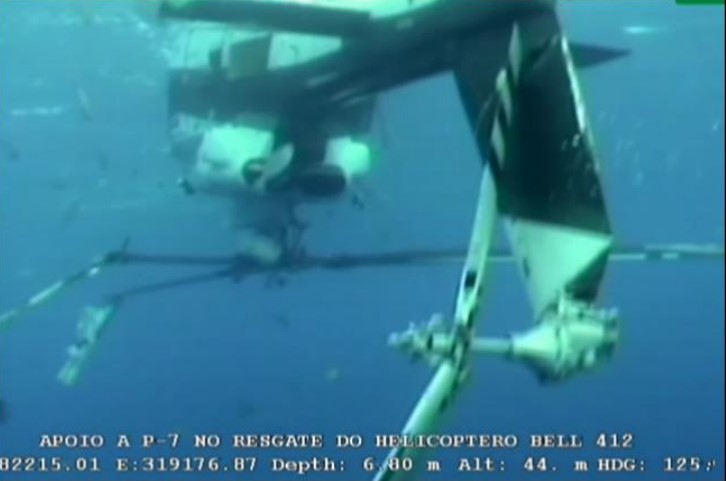 Lider B412 PT-HUW Submerged Prior to Salvage Attempt (Credit: via CENIPA)

The three occupants evacuated the aircraft via the emergency exits, presumably underwater, without assistance.  They were recovered uninjured by Fast Rescue Craft (FRC) from the P-7.  They had previously undertaken Helicopter Underwater Escape Training (HUET), but no other detail is recorded on their egress.  It’s not clear if they were equipped with an emergency breathing system, but we suspect this was unlikely in Brazil in 2013.  There is no mention on how their life jackets performed or what life rafts were fitted.

Subsequently, during an attempt to salvage the aircraft via strop attached to the Main Rotor Head, the Main Gear Box separated from the fuselage, which sank in water depth of 111 m.  Its not clear why, but some past salvage attempts have failed if the lift is not paused to allow water to drain from the cabin. 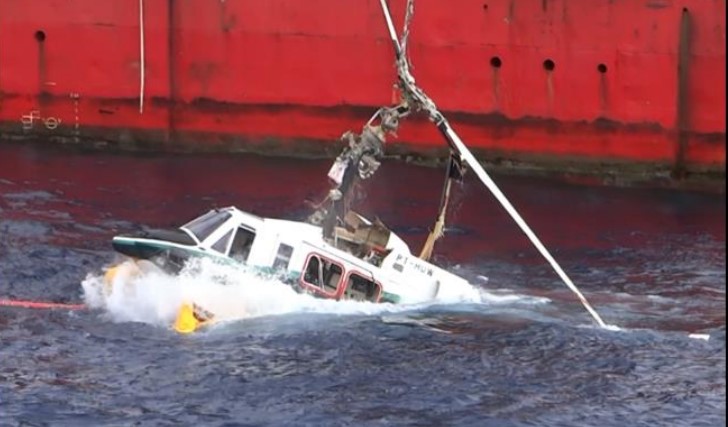 Failed Salvage of B412 PT-HUW at the Moment the MGB Broke from the Fuselage (Credit: via CENIPA)

[T]here was no way to determine whether the attitude shown in the video recording was intentionally performed by the pilot or if it was the result of some other factor. It was not possible to rule out the hypothesis that the meteorological conditions at the time of the aircraft’s approach impaired the pilots’ visibility. In this way, there may have been a late perception of the helideck approach and, in order to slow the aircraft, the pilot performed a flare with a high pitch up angle. Although the pitch up limits specified in the aircraft’s Flight Manual were probably exceeded, it was not possible to associate this attitude with the following events.

According to reports from the crew, on the final approach for landing, they heard a noise followed by a strong vibration, which would have forced the crewmembers to decide for an emergency landing in the water, to avoid total loss of control of the aircraft.

The investigators did examine the Main Rotor Head and Main Gear Box.

In the examinations performed by the DCTA [military test laboratory], on the parts that could be recovered, it was possible to verify that there were rubbing marks in the coupling of the Tail Rotor Drive Quill. 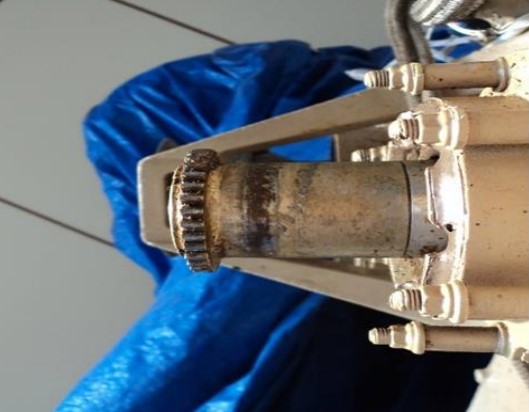 Tail Rotor Quill of Lider B412 PT-HUW (Credit: via CENIPA)

However, if the decoupling of this component had occurred during the flight, the helicopter would have been subjected to rotational movements around the vertical axis, due to the loss of the anti-torque effect of the tail rotor, which did not occur.

According to a report issued by the DCTA, in relation to the Flexible Coupling on the Main Driveshaft, the marks and fractures found on the tips of its teeth seemed to indicate a decoupling. 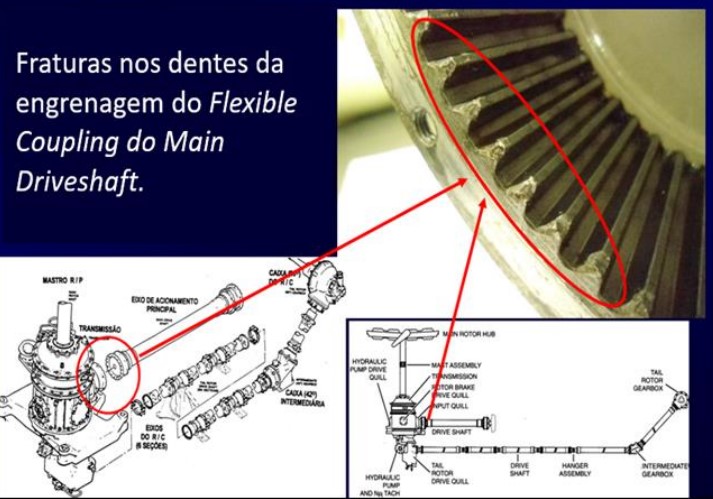 Flexible Drive Coupling of Lider B412 PT-HUW (Credit: via CENIPA)

However, it also points out that, for a greater degree of certainty, it would be necessary to analyze the gear that it uncoupled, but it got stuck to the part of the helicopter that sank. Thus, it was not possible to conclude whether or not there was an uncoupling of the axis in flight. The reports cited did not address whether the damage presented occurred before or after the impact with water.

CENIPA note that because the “aircraft remained on the bottom of the sea” this “prevented the collection of evidence and the analysis of its [other] systems”.  Therefore, they could not determine if a control system malfunction, for example, occurred.

It is very surprising that, as the site of the wreckage was known and there would be extensive subsea operations vessels and Remotely Operated Vehicles (ROVs) available in a busy oil and gas basin, a further attempt to recover the fuselage, or at least survey the wreckage and recover the Cockpit Voice Recorder (CVR) and Flight Data Recorder (FDR), was not conducted.

Beyond confirming the circumstances of the accident discussed above, CENIPA did not identify a specific cause.  They did postulate two potential contributory factors, however:

The meteorological conditions at the location of the occurrence may have impaired the crew’s situational awareness, making the notion of approaching the helideck difficult.
It is possible that there was an inadequate assessment by the pilot about the aircraft’s speed and height parameters in relation to the platform at the time of the approach.

Upon publishing the report 8 years after the accident, CENIPA recommend the Brazilian regulator, ANAC:

Disseminate the lessons learned in the present investigation to the platform operators [sic, semmingly the helicopter operators], in order to warn about the risks inherent to flying in adverse weather conditions, concerning the raising of the situational awareness level of its crew.

Work with the aircraft operator in order to reinforce the use of appropriate techniques for the conservation of the wreckage of damaged aircraft, with the purpose of preserving them so that they can be analysed…

While happily, all on board were recovered unharmed, the lack of commitment to even recovering the CVR and FDR is highly disappointing.

The contributory factors identified and safety recommendations imply the investigators suspect a fast approach and a sudden pitch up to reduce speed as the helideck came into view in reduced visibility.