On 23 June 2016 a Beechcraft King Air A90 aerial survey aircraft suffered a runway excursion during a take off attempt at Hannover Airport.

The German Federal Bureau of Aircraft Accident Investigation (BFU) explain in their safety investigation report (dated 10 March 2020, but issued August 2020) explain that the Belgian owned aircraft, whose registration is not recorded by the BFU, was chartered to a Danish aerial survey company.  Onboard that day were a pilot and a camera system operator.  During taxi the pilot had noted it was “unusually difficult to control the direction of the aircraft” but not so bad as to cause concern.

At about 0828 hrs, the pilot received the clearance from the tower controller to enter runway 09L. He stated that about 1 min later he received take-off clearance and set engine takeoff power. He had paid attention to the two engines building up their take-off rotation speed uniformly. 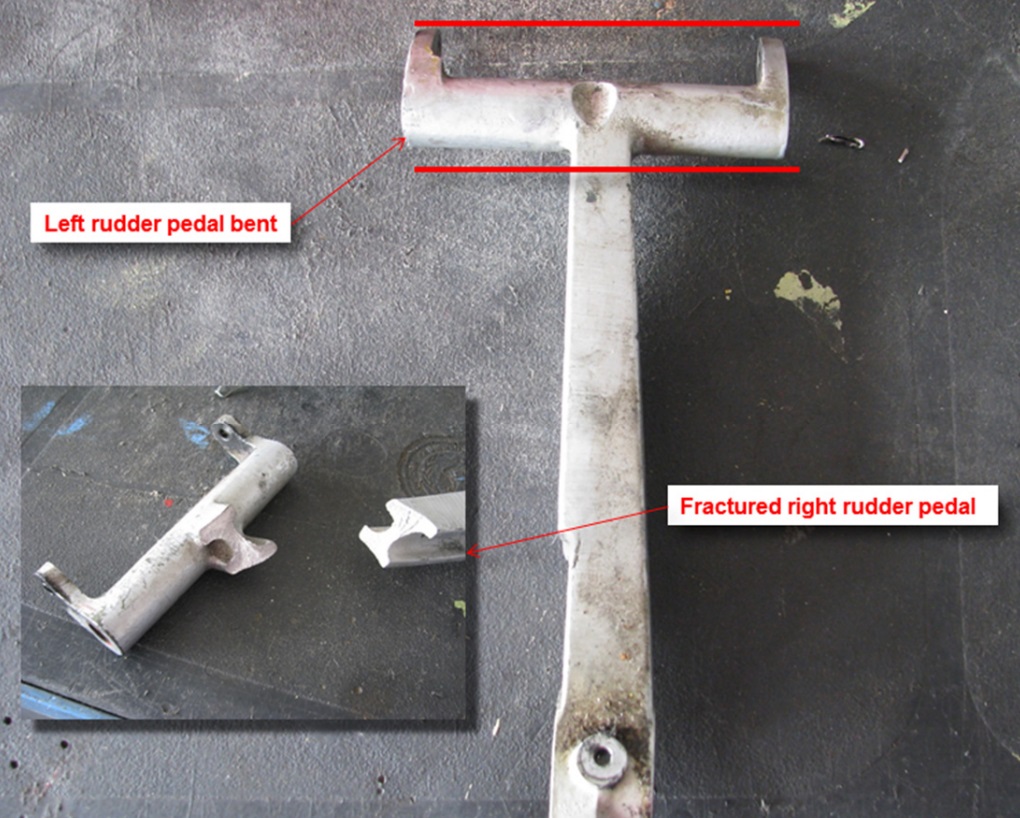 The aircraft could no longer be controlled.

It veered left off runway 09L with a speed of about 30 kt… It came to a stop on the grass next to the runway. [The aircraft] had yawed by approximately 70°.

The King Air A90 has a Gust Lock System for use if the aircraft is parked for longer periods of time to prevent damage to the control surfaces due to movements caused by wind.  The Pilot Operating Handbook says:

Positive locking of the rudder, elevator and aileron control surfaces, and engine controls (power levers, propeller levers, and condition levers) is provided by a removable lock assembly consisting of two pins and an elongated U-shaped strap interconnected by a chain.

Installation of the control locks is accomplished by inserting the strap over the aligned engine control levers from the copilot’s side; then the aileron-elevator locking pin is inserted through a guide hole in the top of the pilot’s control column assembly, thus locking the control wheels. The rudder pedals are held in the neutral position by the largest of the two pins, which is installed horizontally through the pilot’s rudder pedals. Removal sequence is a reverse of the installation procedure. […]

Caution Do not tow aircraft with rudder locks installed, as severe damage to the nose steering linkage can result. […]

The manufacture claim that these “…lock a combination of primary flight controls in positions that will preclude taxi…”.

The BFU note that (our emphasis added):

In the aircraft concerned the safety chain, which normally runs from the control column to the power lever to the pedals was missing. There was no warning flag on the safety pin for the rudder pedals. The original red paint was barely visible. 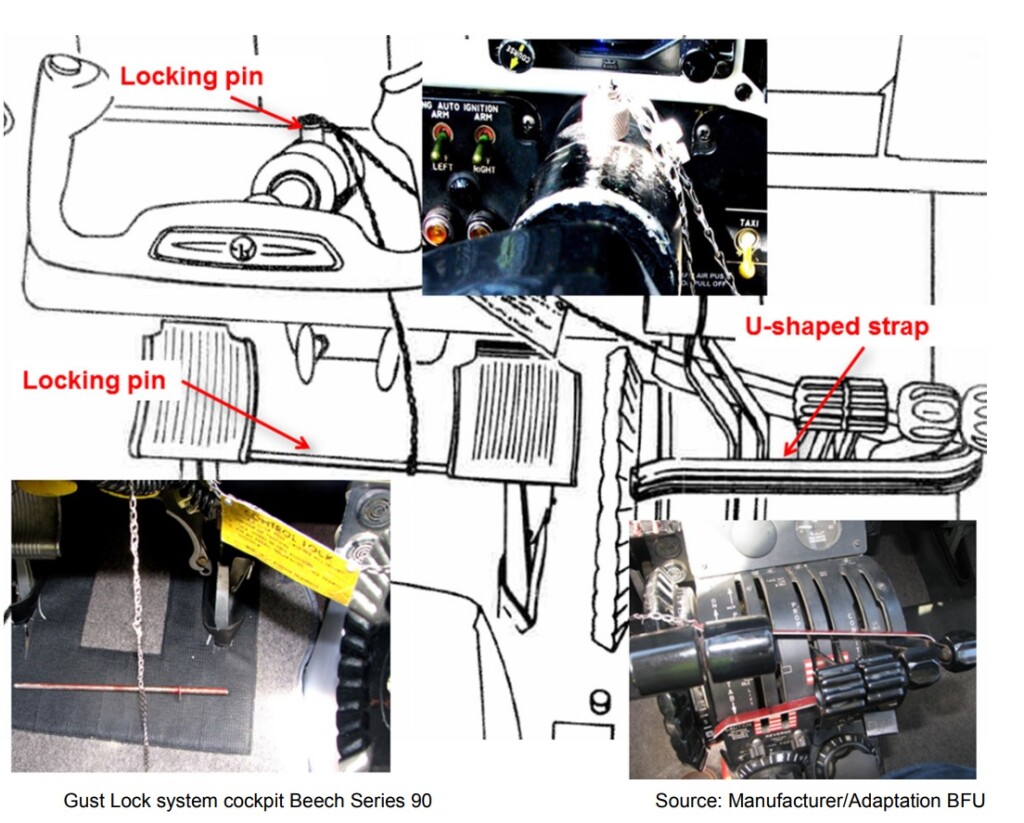 The A90 pre-flight checklist includes: (2) removal of control locks (but doesn’t specify how many), (11) checking propeller control movement  and (14) the flying control ‘Free & Correct Movement’ check, verifying the control surface movement including their correct deflections. To complete (11) and (14) the locks have to been removed. 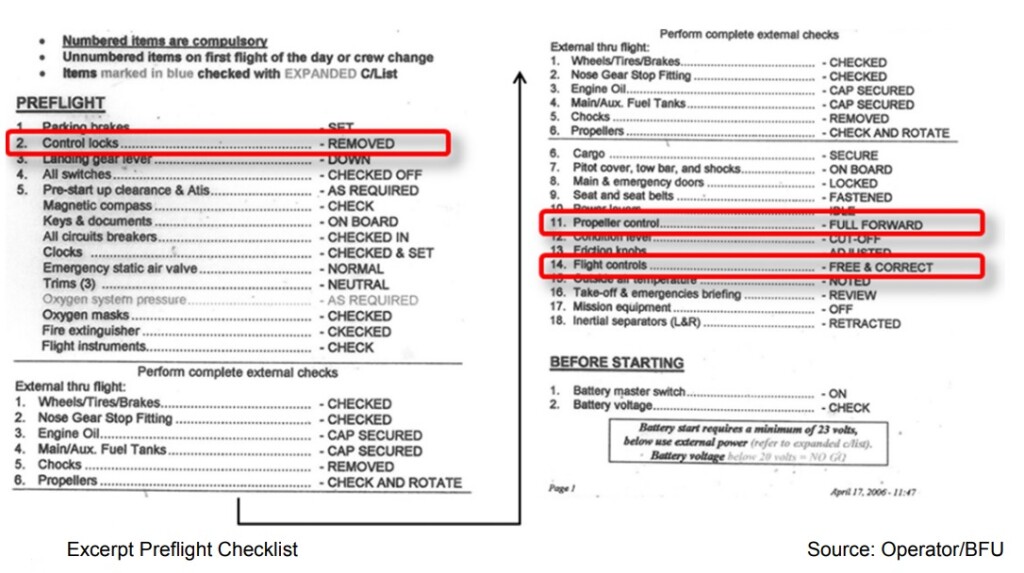 The BFU note that also:

After engine start-up, the Before Taxi Checklist listed the item Flight Controls – Checked/Free Movement, among other things. The pilot should check if control surfaces and rudder deflect correctly.

Gust locks have of course been left in place in the past.  The manufacturer has issued a Safety Communiqué / Safety Reminder in March 2008 entitled “Safety reminder be sure Control Locks are removed prior Take-Off”:

Twenty-three accidents involving control locks – in planes produced by 10 different manufacturers – were reported by NTSB during the years 1964 through 1969 (only available records). So it is vital that pilots make absolutely certain they release control locks in any airplane. Although control lock removal is the pilot’s responsibility, we are always trying to find ways to improve safety. Therefore, we are doing something about the NTSB’s suggestion that all aviation manufacturers look at the type of gust control locks used to see if they can be made more fool-proof. We also feel that you, as an aircraft owner or operator, should be given the benefit of these findings and cautioned about being sure the control locks are removed.

The BFU reference one past gust lock accident that Aerossurance has previously examined: Gulfstream G-IV Take Off Accident & Human Factors.  They mention two others:

For the departure from Hannover:

…when he entered the airplane, the safety pin had been in the control column and the safety element for power levers been in place.

These were removed successfully:

The serious incident, veering off the runway, was a result of loss of control during take-off run.

And clearly too: Inspect your gust locks, record and rectify defects and degradations.

Aerossurance was to have run two training workshops at the EHA European Rotors VTOL Show and Safety Conference in Cologne in November 2020 on a) Safety Culture and Leadership and b) Contracting Aviation Services: An Introduction to the Basics.  Unfortunately these have been postponed due to COVID-19.