On 15 December 2020 a Leonardo AW139 air ambulance helicopter was involved in two incidents while attempting to rescue three people stranded on a cliff near Childers Cove, Victoria,  19 km SE of Warrnambool Airport, at 19:00 Local Time.

The Australian Transport Safety Bureau (ATSB) report that the helicopter was being flown single pilot with an aircrew officer (winch operator) and a paramedic (winchman).  ATSB do not identify the aircraft registration or the operator but images suggest an aircraft contracted by Ambulance Victoria, which online images suggest are only single hoist equipped.

The ATSB explain that:

During this winch-out procedure, the slack cable was dispensed onto the aircraft floor and out the cabin door.

When the aircrew officer commenced the winch-in of the hook assembly, the cable failed.

The aircrew officer secured the loose end of the winch cable and the pilot landed the helicopter in a nearby carpark to assess the situation.

Upon crew examination it was found that the hoist cable had looped around the right-hand main landing gear resulting in the failure of the cable and damage to several landing gear components. 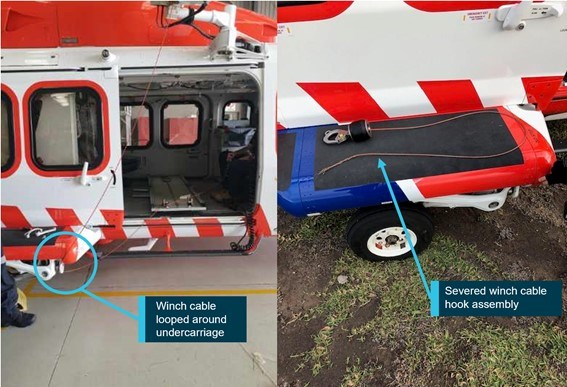 No information is provided on when the remaining two individuals on the cliff were rescued.

An engineer was able to inspect the AW139 that evening in the car park shortly before last light.  One might expect that even if nothing was said, there would be a perceived pressure to return the aircraft to its base to resume stand-by for the ambulance service as soon as practical.

The engineer cleared the aircraft to return to base. However, the ATSB say that…

…it was later determined that the damage to the undercarriage rendered the helicopter unserviceable.

The ATSB choose not to conduct an investigation and have simply reported information supplied by the operator.   ATSB say that the operator took three safety actions:

In summary the actions were ‘an alert, ‘a reminder’ and a ‘learning package’.

Being prepared to share the learning package more widely is to be highly commended.

Readers who become involved in a similar situation could usefully examine the effectiveness of prior training and competence assessment, the appropriateness of procedures, communications with the crew in the field and relevant organisational norms.

Although bAlthough b
Detected language : English