On 7 October 2017 Leonardo AW139 I-TNDD of the Vigili del Fuoco fire and rescue service was conducting a hoist rescue mission at Monte Casale, near Trentino in Northern Italy, when it suffered a main rotor blade strike on a cliff face.  The aircraft landed safely and an attempt was made to assess the damage while rotors running.  The aircraft then made a further flight to Trento Mattarello Airport. 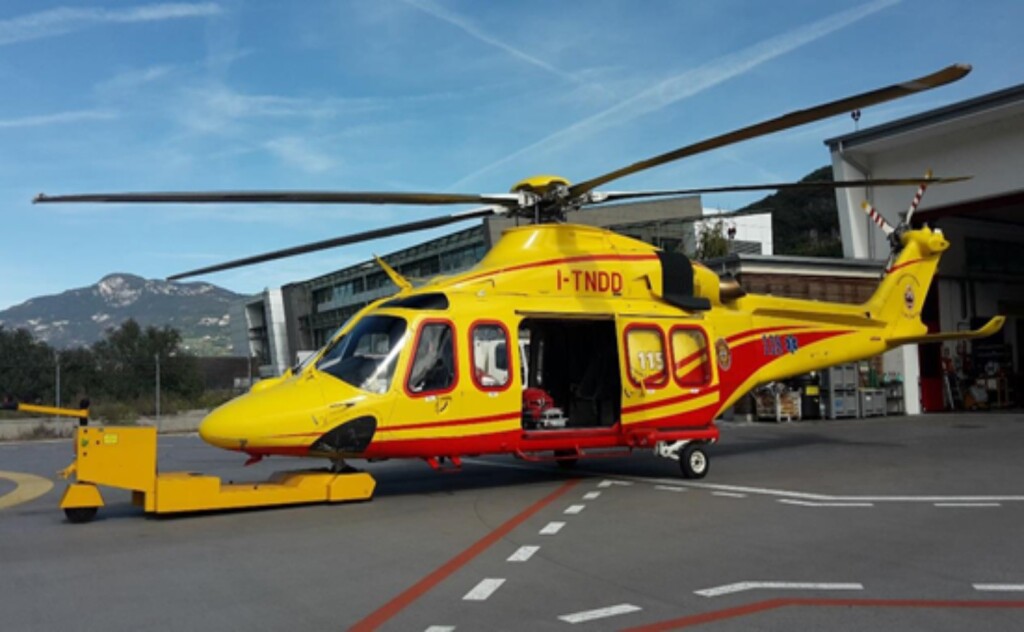 The Italian National Agency for Flight Safety (ANSV) explain in their safety investigation report (issued only 0n Italian on 8 September 2021) that the aircraft had been tasked at 08:14 after the fall of a young climber.  The boy was near the base of a cliff at 2100 ft AMSL. The weather was good and the wind was negligible. 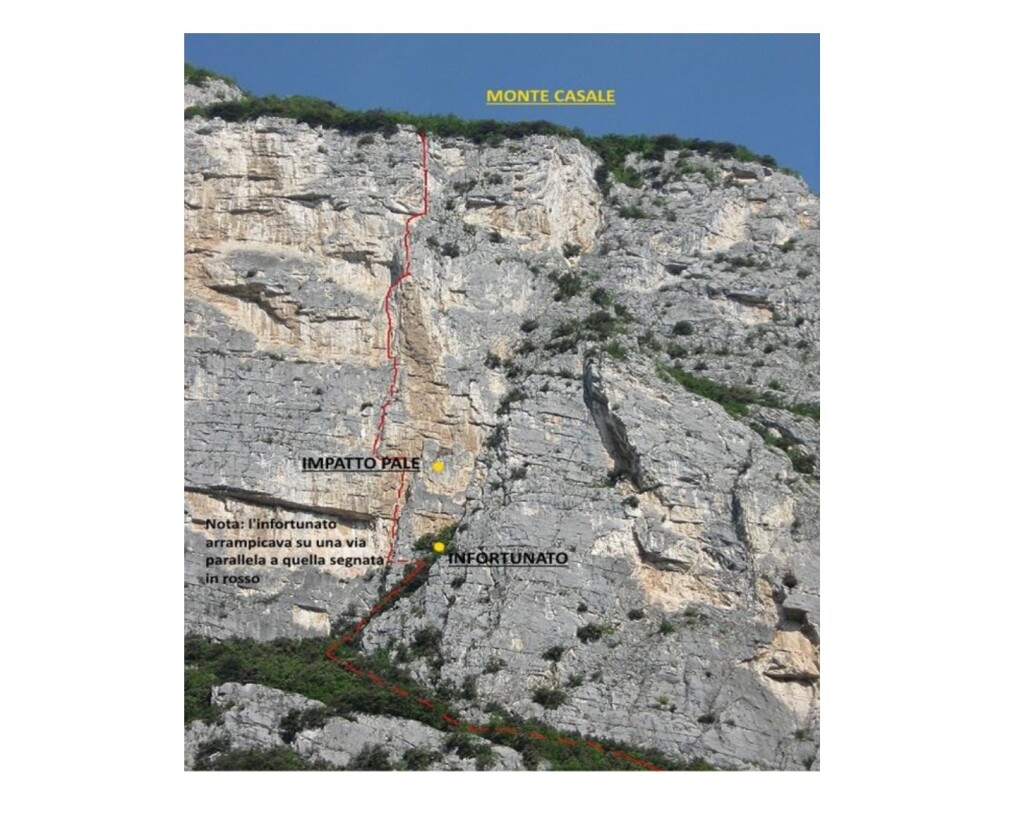 On board the hoist-equipped helicopter were three crew (pilot, hoist operator and winchman) and two medical personnel.  The single pilot had 5992 hours of experience, 715 on type and 3200 hours of HEMS / rescue flying.  If a HEMS mission the hoist operator would have been sat next to the pilot as the HEMS Technical Crew Member (TCM) on the outbound flight.

The casualty was rapidly located and initially the winchman was lowered to assess the casualty.  Then while hoisting down the two medical personnel from c 25-20 m AGL at 08:27 there was “a slight variation in the noise of the rotor itself is heard and consequently a slight oscillation of rotor revolutions and torque occurs”.

The ANSV comment that only the pilot appeared to notice this.  A few seconds later the pilot told the hoist operator that a blade strike had occurred and they had seen “a cloud of dust on the [cliff] wall, in the upper left”.  The aircraft diverted to Pietramurata, about two minutes away.  During that flight no abnormal vibration was felt.  After landing, the rotor remained running as the hoist operator exited the aircraft to examine the rotor tips.  Damage was evident but after discussion the decision was made to return to home base at Trento Mattarello Airport, influence by the lack of vibration.

During that 6 minute 20 second flight, there was further discussion on the incident.  The pilot believed they must have struck a well camouflaged outcrop having been convinced they had c 1.5 m of clearance.

On shut down it was found that the helicopter suffered loss of 70 – 80 mm of each of the five main rotor blades and damage to the leading edge protection strips. 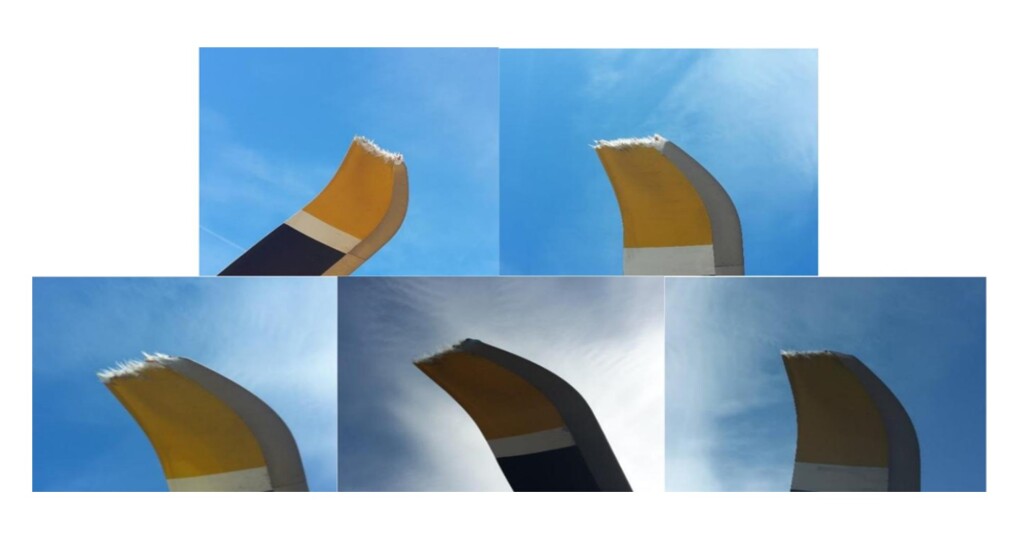 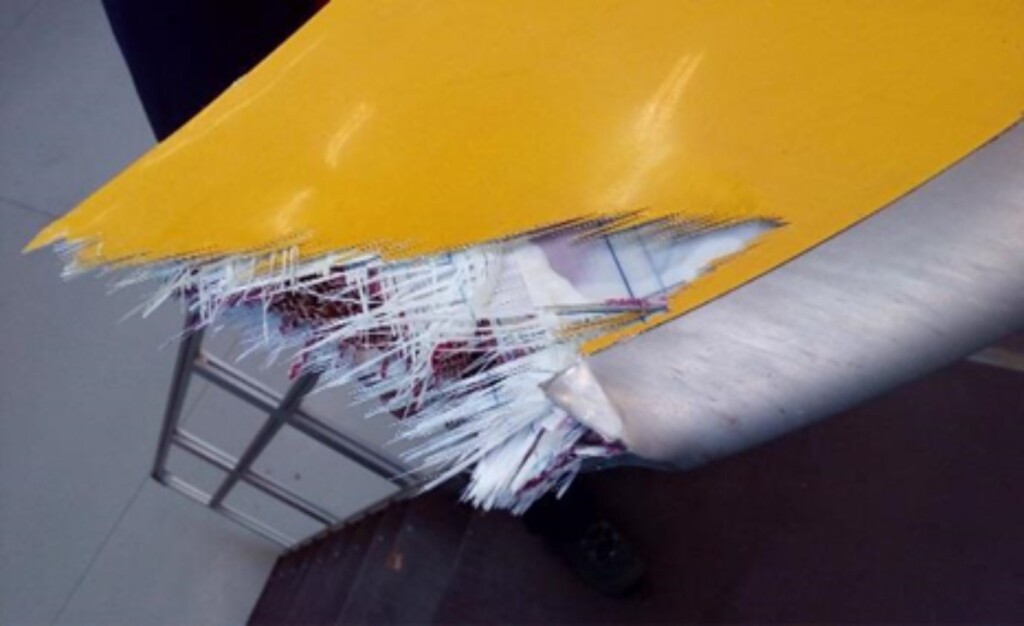 ….listening to the CVR shows the complexity of the rescue intervention…

It is reasonable to believe that the greyish-yellow background of the rock face…the helicopter was positioned orthogonally [from] did not help the pilot in determining the distance of the main rotor blades from the wall itself, taking into account that the blades, in the last part, are painted yellow to define the outer limit, however, blending in with the background of the aforementioned wall.

The ANSV note that the helicopter was not equipped (nor was it required to be equipped) with any obstacle detection system.  Such systems are available for the AW139.  They note that after the loss of a Babcock HEMS AW139 EC-KJT in 2017 they had recommended that “operators adequately take into consideration aircraft equipment in their process of analysing and managing the risks associated with the HEMS environment and that ENAC [the regulator] make it the subject of assessment during the surveillance of operators

The investigators also observe that a second qualified person in the cockpit would have been useful.

In relation to the return to base:

The problem of “attention” has been and is being studied in the context of human factors.  In summary, in cognitive processes, attention allows you to select some stimuli while ignoring others.  When, as in the case in question, we focus excessively on a stimulus…, we tend to lose sight of the general context, with the consequence of neglecting other essential information in moments of particular criticality.

In the case of the I-TNDD pilot their attention was focused on a single aspect (the controllability of the aircraft), which they evidently considered so important that he excluded all other information. As highlighted in the aeronautical field by human factor scholars, the negative aspect of this polarization of attention is that of slipping into a kind of “black hole”, where awareness of the situation is lost, cutting out other information / evaluations.

The channelling of attention can cause dangerous fixations and complacency phenomena, here understood as the inability to get out of a course of erroneous actions due to the restriction of references to those who generate the wrong action.