On 14 February 2017 Beechcraft King Air C90A N1551C, an air ambulance operated by Eaglemed, was substantially damaged during a precautionary landing following a loss of power on one engine near Rattan, Oklahoma. The single pilot and two medical personnel aboard were uninjured. 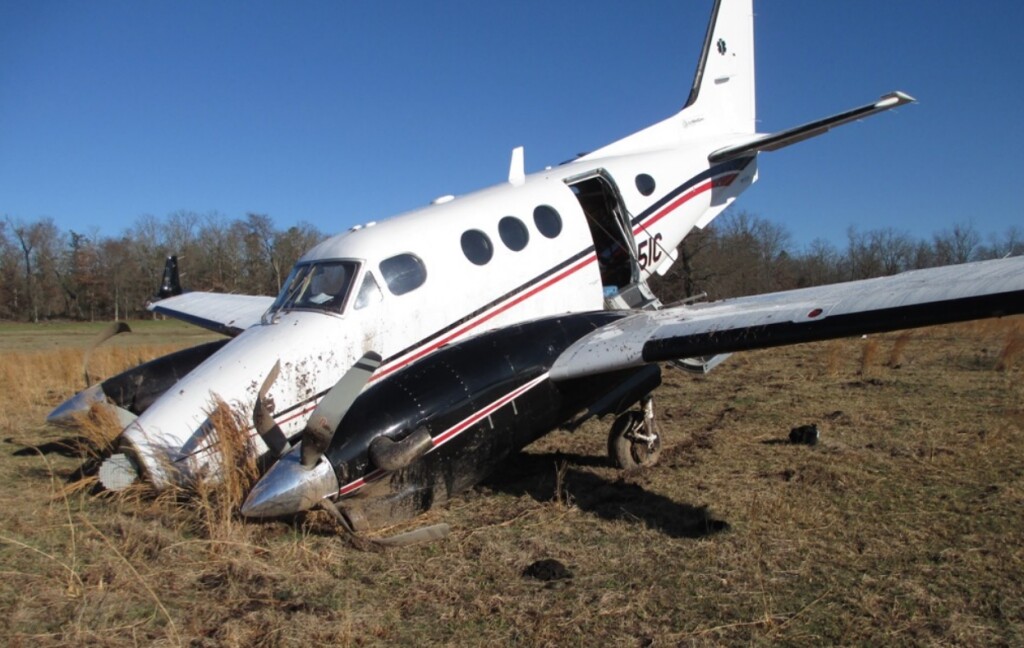 The pilot, a 72-year-old male with 22000 flying hours total experience and 400 on type, was phoned at 0710 by the night shift pilot (who was rostered to be on duty to 1000) and asked to come in early to do a patient transfer flight from Idabel, Oklahoma to Paris, Texas.  The US National Transportation Safety Board (NTSB) explain in their safety investigation report (issued 10 August 2020) that the aircraft departed McAlester, Oklahoma for Idabel at 0806, but don’t discuss the flight planning or pre-flight.

The pilot stated that the engine start and airplane power-up were normal. The engine ice vanes were lowered, and the de-icing system was activated as required for ground operations. The ice vanes were subsequently raised before takeoff.

Takeoff and climb out were routine, and he subsequently leveled off the airplane at 7,000 ft. mean sea level (msl). The air traffic controller informed him of “heavy rain showers” near the destination airport and he “put the ice vanes down.” Shortly afterward, the airplane experienced two “quick” electrical power fluctuation; “everything went away and then came back.” “Seconds later the entire [electrical] system failed.” Due to the associated loss of navigation capability while operating in instrument meteorological conditions, the pilot set a general course for better weather conditions based upon the preflight weather briefing.

During the attempt to find a suitable hole in the clouds to descend through under visual conditions, the left engine lost power. The pilot ultimately located a field through the cloud cover and executed a single engine precautionary landing [at 1145]. 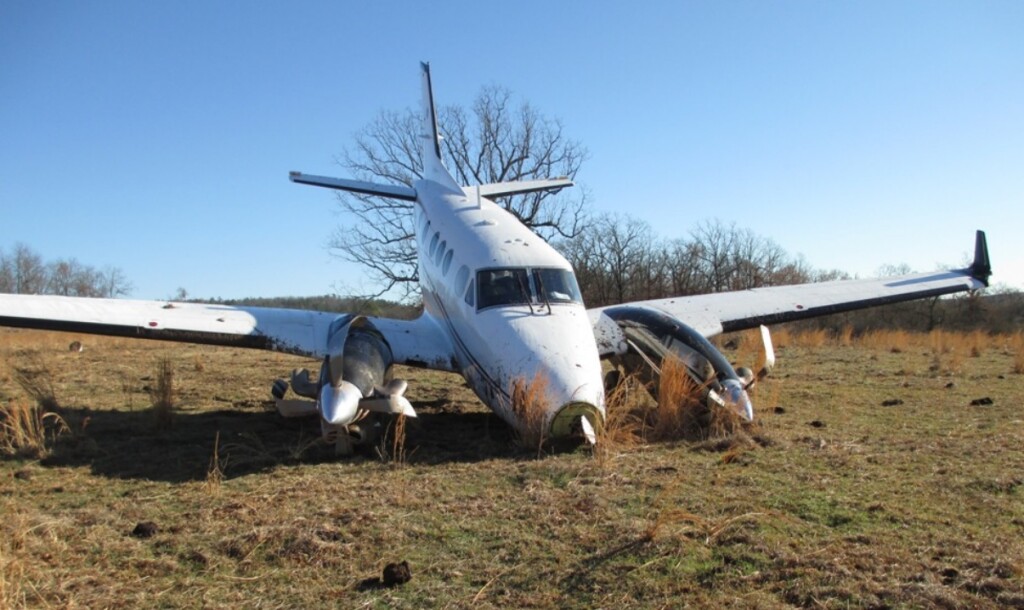 The nose landing gear collapsed, and the airplane sustained substantial damage to the right engine mount and firewall. 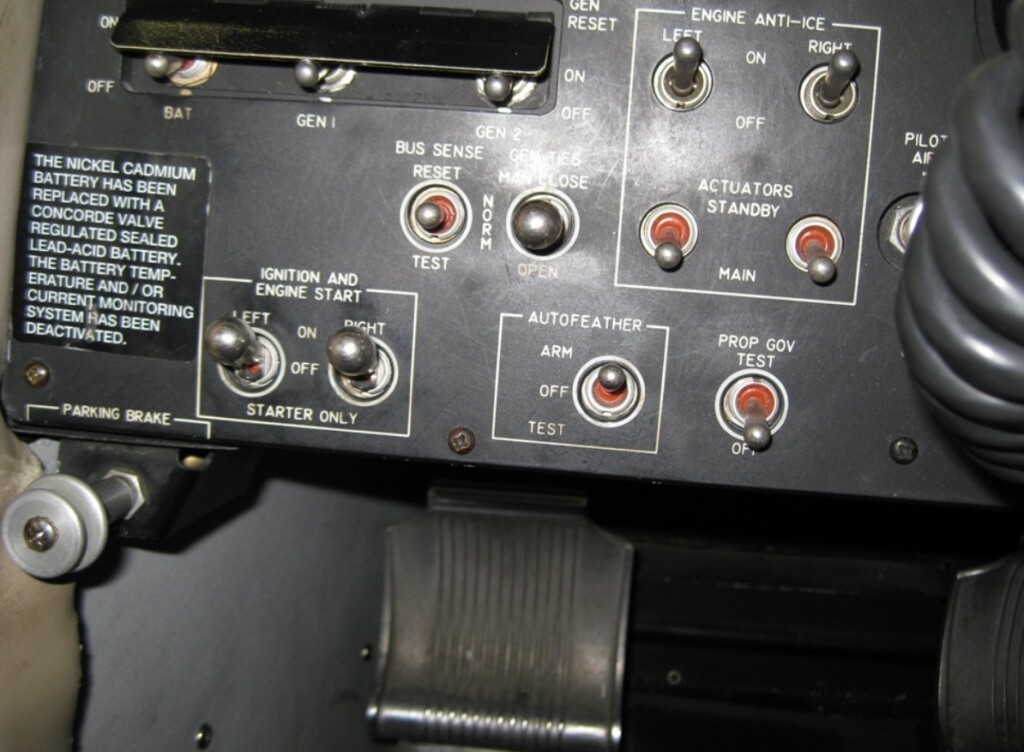 The pilot reported that the medical crew became apprehensive as the emergency transpired. On three occasions, as the pilot maneuvered the airplane attempting to locate a hole in the clouds to descend, the medical crew member in the co-pilot seat grabbed the control wheel to keep the pilot from banking the airplane. He subsequently relinquished the control wheel as directed by the pilot. The medical crew attempted to locate the airplane by using cellphones to coordinate with the operator’s operations center or by using the cellphone GPS capability. However, these efforts resulted in multiple course adjustments and ultimately failed to encounter visual meteorological conditions before fuel exhaustion on the left engine.

The medical personnel say pilot was “making some aggressive banks and turns”, being “unresponsive” and refused to turn around to McAlester, Oklahoma.  The pilot accused the medical personnel of panicking, failure to divulge critical information (namely the loss of a phone signal), interference and violating FAR 91.11 (Prohibition on Interference with Crew Members).  The pilot’s statement however did not explain how the emergency originally developed…

The lack of fuel onboard at the time of the accident is consistent with a loss of engine power due to fuel exhaustion. This was a result of the extended flight time as the pilot attempted to exit instrument conditions after the loss of electrical power to locate a suitable airport.  Further, the operator reported that 253 gallons (1,720 lbs) of fuel were on board at takeoff, and the accident flight duration was [expected to be] 3.65 hours. At maximum range power, the expected fuel consumption was about 406 lbs/hour, resulting in an endurance of about 4.2 hours. Thus, the pilot did not have the adequate fuel reserves required for flying in IMC.

Looking at the relatively close locations of McAlester, OK, Idabel, OK and Paris, TX we find an estimate of 3.65 hours very surprising (the accident pilot stated that the night shift pilot could have completed the flight by 1000).  Equally, we note the accident occurred after 2 hours 39 mins yet the timing of the electrical power loss is not clear.  No FAA radar tracking data is included, and it’s not clear what reaction there was to the non-communicating aircraft.  The NTSB also don’t discuss the operator or CRM in any further detail.

The loss of electrical power due to the pilot’s inadvertent selection of the engine start switches and the subsequent fuel exhaustion to the left engine as the pilot attempted to locate visual meteorological conditions.

Contributing to the accident were the pilot’s failure to ensure adequate fuel reserves on board for the flight in instrument meteorological conditions and the miscommunication between the pilot and medical crewmembers. 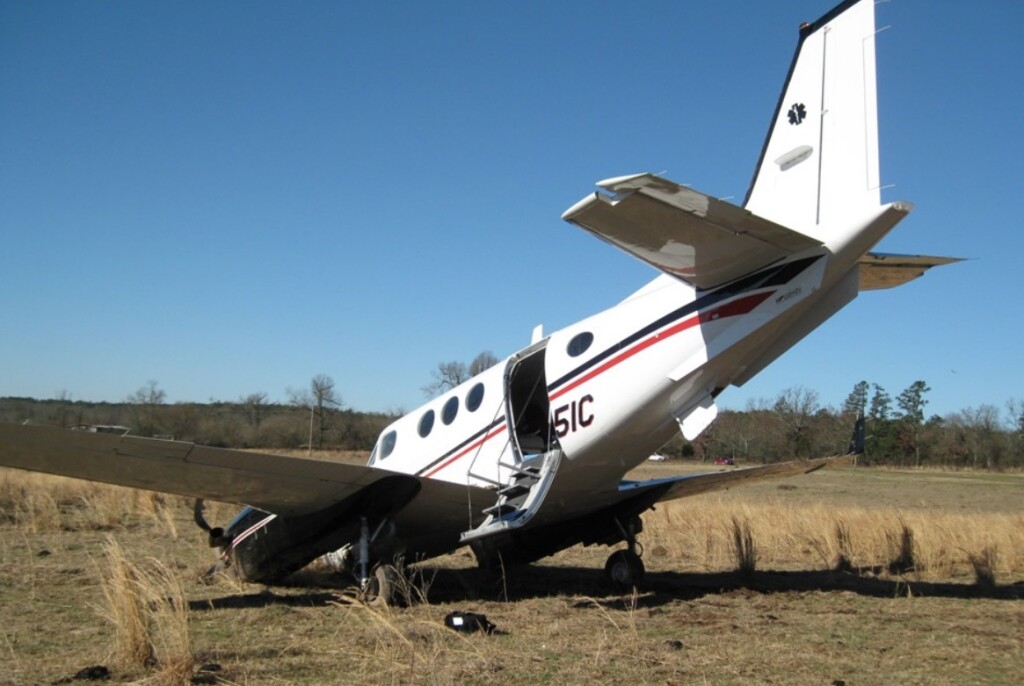 Aerossurance was to have run workshops at the EHA European Rotors VTOL Show and Safety Conference in Cologne in November 2020 on a) Safety Culture and Leadership and b) Contracting Aviation Services: An Introduction to the Basics.  Sadly the show has been postponed to 2021.