On 30 October 2020 Airbus Helicopters AS350B3e (H125) Squirrel F-HLXO of Héliberté suffered an accident during Helicopter External Sling Load Operations (HESLO) in Thiézac when after a change of plan, an underslung steel cable became tangled in the tail rotor when return from delivering a load.

…the pilot and two ground staff prepared a sling consisting of a ten-meter wire rope and a two-meter textile extension fitted with a hook. 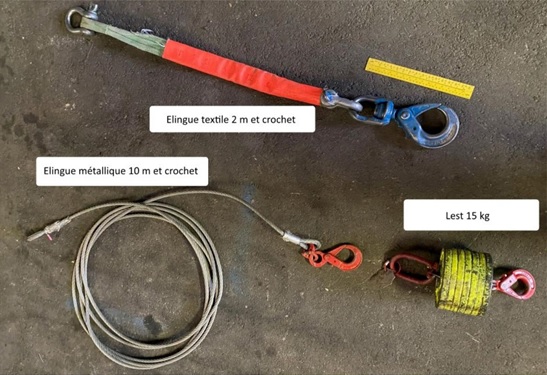 The tasking consists of transporting two tanks of 400 kg and ten bags…(six of about 800 kg and four of about 1,000 kg). After this phase of preparation and the briefing, the pilot takes off and presents the helicopter to hook up the tank, which is the first of the loads to be transported. The ground staff connects the hook of the metal sling to the textile extension which was already attached to the tank. The pilot lifts the load and moves towards the drop zone located 1,700 m away and approximately 230 m higher. Arriving at the drop-off area, the second ground team were unable to open the hook and release the load.  After a few minutes and in the absence of an open area nearby allowing the helicopter to land, the ground personnel in consultation with the pilot decided to unhook the textile extension from the metal cable.

The pilot returned to the loading area, monitoring the cable via the exterior mirror. As the helicopter picks up speed the metal cable wrapped around the tail boom of the helicopter and the tail rotor. The pilot heard a ‘popping’ noise, realised the anti-torque pedals were ineffective and managed to rapidly land near the loading area. The accident was not however promptly reported to the BEA.  Examining photographs the BEA note that the Tail Gear Box (TGB) was partially torn off, the tail driveshaft broken and the tailboom deformed.  The BEA concluded the metal cable had wrapped around the tail rotor.

Ground crew interviews revealed that at the loading point:

…the textile sling was already hooked onto the tank strap and that they only had to couple the metal sling and the textile strap. They did not notice any anomaly when hooking the straps of the tank to the hook of the textile sling. The second ground crew member indicated that they had had a discussion with the pilot about the need to leave the 15 kg ballast on the sling line. He stated that a joint decision with the pilot to remove the ballast was taken in view of the masses of the….bags which seemed a little high, and after having estimated that the hook of the textile sling must have a mass equivalent to the ballast.

The second ground crew member then went to the drop-off area. He went on to explain that:

…when the tank was placed in the area, he was unable to open the hook, the straps being too short and they were still under tension. He had no other solution than to disconnect the textile sling from the metal sling.

The pilot stated he “flew slowly while monitoring the behaviour of the unweighted sling using the exterior mirror”.

The helicopter is equipped with a Helisafe computer, recording flight and engine parameters, as well as a Vision 1000 computer, recording flight parameters, cockpit images and ambient cockpit noise. The two systems could be synchronized. The use of the ambient noise in the cockpit made it possible to precisely determine the moment when the interference of the sling with the tail boom of the helicopter occurred. 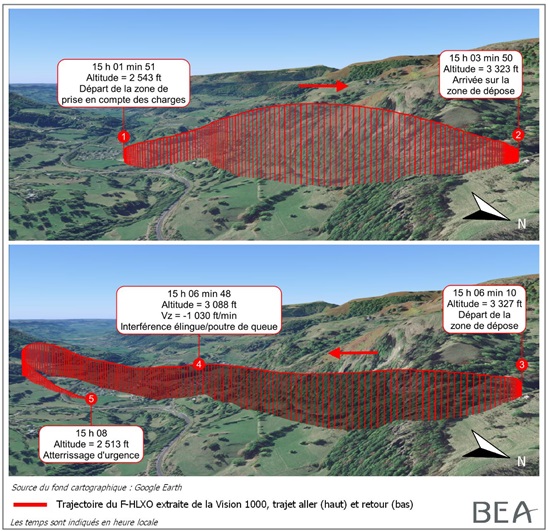 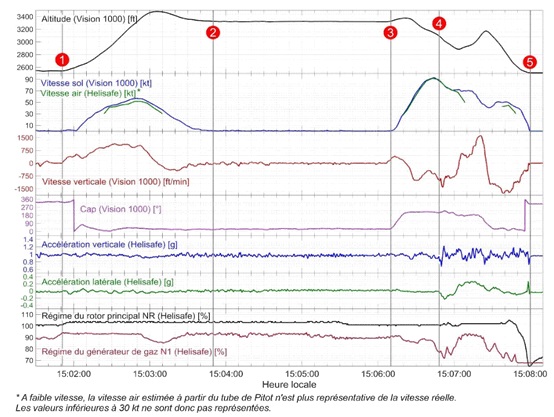 One of the principles for the sizing of load suspension straps is to have an angle in the order of 45 ° to 60 ° of the straps…. 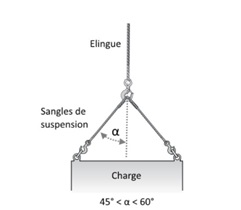 Airbus issued a newsletter in 2017 concerning the risks associated with sling transport. This letter specifies in particular the increased risk by unloaded slings which can go up and interfere with the tail boom of the helicopter and recommends the use of a ballast of at least 15 kg to decrease the risk. It specifies that in the case of a flight with an unweighted sling, it is necessary to avoid that the speed exceeds the Vy and the pilot must monitor the behavior of the sling during flight.

Subsequently, the operator carried out an internal investigation that identified that:

The operator has implemented the following preventive / corrective actions: