On the afternoon of 22 March 2021 French Army Airbus EC665 Tiger (Tigre) HAP s/n 2002 of the 5th Helicopter Combat Regiment (5e RHC) was engaged in an area reconnaissance training mission at Castres Le Pesquié.  The helicopter had flown to the exercise area from its base at Pau that morning.  Investigators of the BEA-Etat (BEA-E) explain in their safety investigation report (issued in French only)

During transit to the exercise area, in visual flight at around 500 feet, the pilot in the front seat detected a fault on the collective stick. Holding this handle with his left hand, he notices during a vertical movement that one of his fingers rubs against the seat to the right of the handle, which is unusual.

Subsequent inspection revealed that the top of the front collective pilot stick (1) could be separated from the lower tube (8) by simply pulling in the axis of the tube.  The design is such that there is a cover (7), bolt (6), washers (4 and 5), nut (3) and pin (2). The screw was fitted through the stick and the cover but crucially it did not pass through the holes in the lower tube. 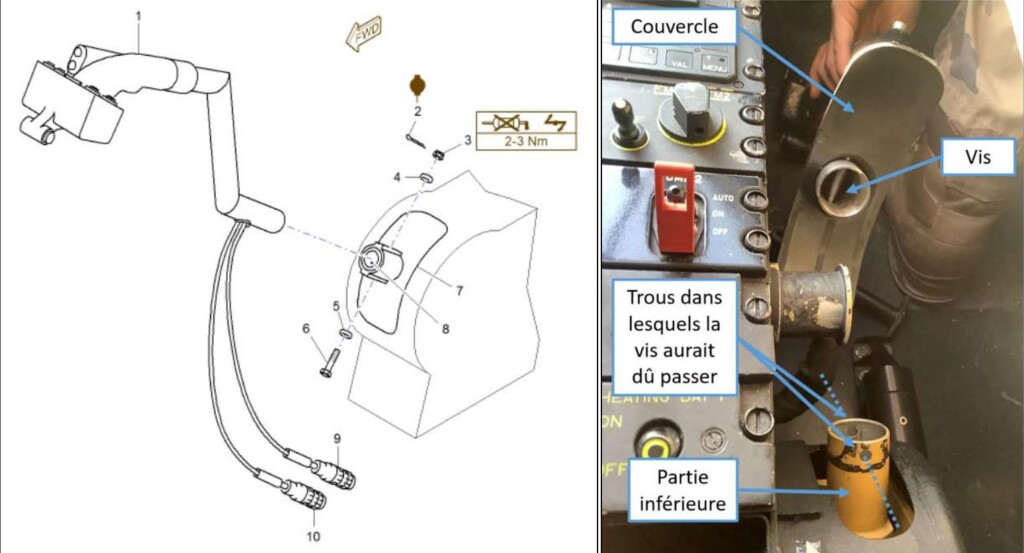 The last recorded maintenance on the collective occurred on 28 October 2020, 53 flying hours and almost 5 months earlier.  The BEA-E report that the task:

…was carried out by a novice technician who had obtained the level 1 technical certificate (CT 1) but was awaiting a type rating course on EC665.

The French Army practice is for technicians to gain 6 months of hands on maintenance experience before undertaking a type course.  The French FR-145 military aviation maintenance regulations are based on EMAR-145, itself derived from EASA Part-145, so effectively this was a newly qualified A Licenced engineer.

He was performing this maintenance operation for the first time, under the supervision of a team leader. The latter considered that the installation of the collective pilot stick was a simple operation with no possibility of error.

The technician was given the work card for the task.

The team leader remained present during the operation. However, he had no direct view of the actions of the technician during the fitment of the collective pilot stick due to the narrowness of the Tiger’s cockpit. He then checked the assembly a posteriori.

At the end, the controller cross-checked the entire maintenance intervention on the flying controls as planned. He did not detect any improper installation of the collective pilot stick.

The BEA-E believe it was during this task that the misassembly occurred.  Crucially, the BEA-E describe the work card as “succinct”.  While conciseness is usually a good thing, in this case the work card “did not present a detailed method for checking the conformity of the installation”.  In particular, this was not identified a a critical task, while other tasks that had to be checked by the controller were.

The BEA-E explain  if the bolt was misaligned, then the cover would sit 6-8 mm proud rather than being flush.

This is the distance between fitting the bolt through hole in both tubes and fitting it while the tubes were misaligned. 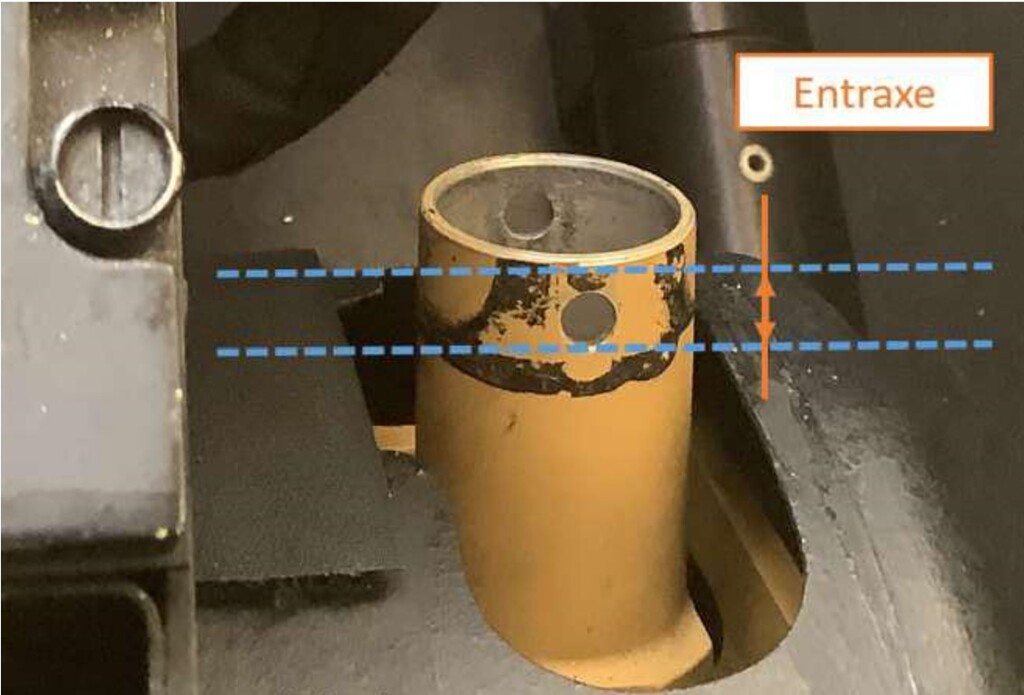 The Lower Tube of the Tiger Collective (Credit: BEA-E)

However, while 6-8 mm might seem significant, due to the direction the cover is viewed from it is hard to detect visually.

Furthermore, in tests done by the BEA-E, pilots were unable to detect a difference in feel between correctly and incorrectly secure collectives.  This is explained by the friction between the two tubes, even when the upper tube is only just inside the lower tube.

The only reason the problem was detected during the incident flight is that a slight rotation of the collective had occurred and one of the pilot’s fingers brushed against the side of his seat.

The BEA-E has issued two safety recommendations “to reinforce the measures to avoid an incorrect assembly” and to make maintenance personnel” aware of the risk of incorrect…placement…and the difficulty of perceiving it”.

In 2014 similar events had occurred on both the EC145 and EC135 which resulted in Airbus issuing safety information notice (SIN) 2787-S -67 on 1 October 2014 and subsequently adding an explicit check to verify correct in the maintenance data for those types.   The BEA-E however also briefly discuss an event that occurred only a month earlier during a Gendarme EC145 flight on 23 February 2021. 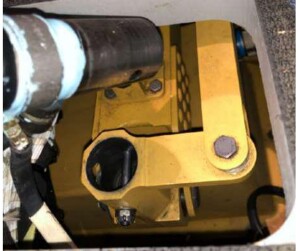 No investigation details are provided for the Gendarme incident.

Frustratingly there is a common tendency in some circles to routinely label ‘maintenance errors’ as ‘failures to follow procedure’.  The acronyms FFP and F2P are thrown around for these alleged Failure to Follow Procedure events, often as a result of simplistic and superficial tick-box maintenance error classifications, completed in a rush to judge the individuals involved at the frontline and determine how culpable they were. This erroneous labelling is itself the result of a fundamental attribution error.  However, its also common to find upon deeper investigation there are systematic issues, often including gaps in the procedures.

For the last four years Aerossurance‘s Andy Evans has discussed the corrosive danger of this tendency and the benefits of the concept of maintenance observation on the Cranfield University MSc level Aviation Maintenance Human Factors Course.