On 28 September 2018 a private Airbus Helicopters AS350B3e (H125) N907PL was destroyed in an accident in Glacier Bay National Park, near Lituya Bay, about 60 miles NW of Gustavus, Alaska. One person died, 2 remain missing presumed dead and one was seriously injured. 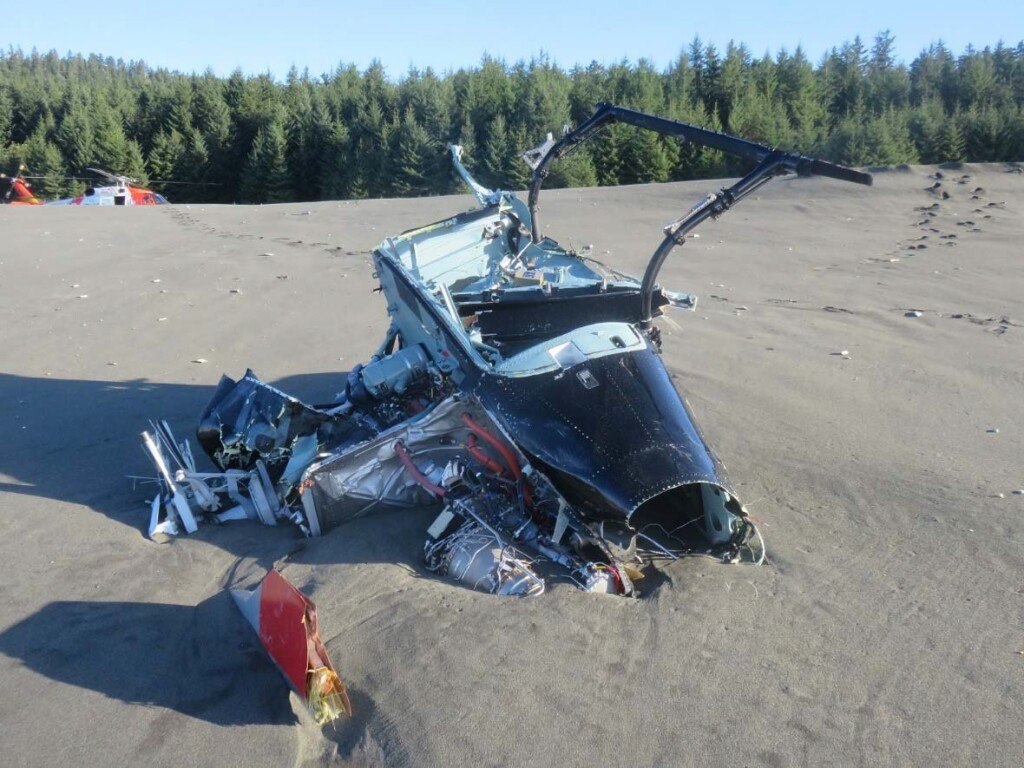 The private pilot [aged 42, 1,129 flying hours total, 26 on type and president of Anchorage’s Davis Constructors and Engineers] had just purchased the helicopter…

He had done a AS350B3e factory course in Texas with 3 hours of flight time and 1 hour of simulator time.  He had then done 18.3 hours of flying an AS350B2 in Alaska, and another 6 hours on the AS350B3e in Texas, before embarking on the delivery flight from Texas to Alaska.

The trip began on September 25, 2018, and included more than 30 stops for sightseeing, fuel, and rest. 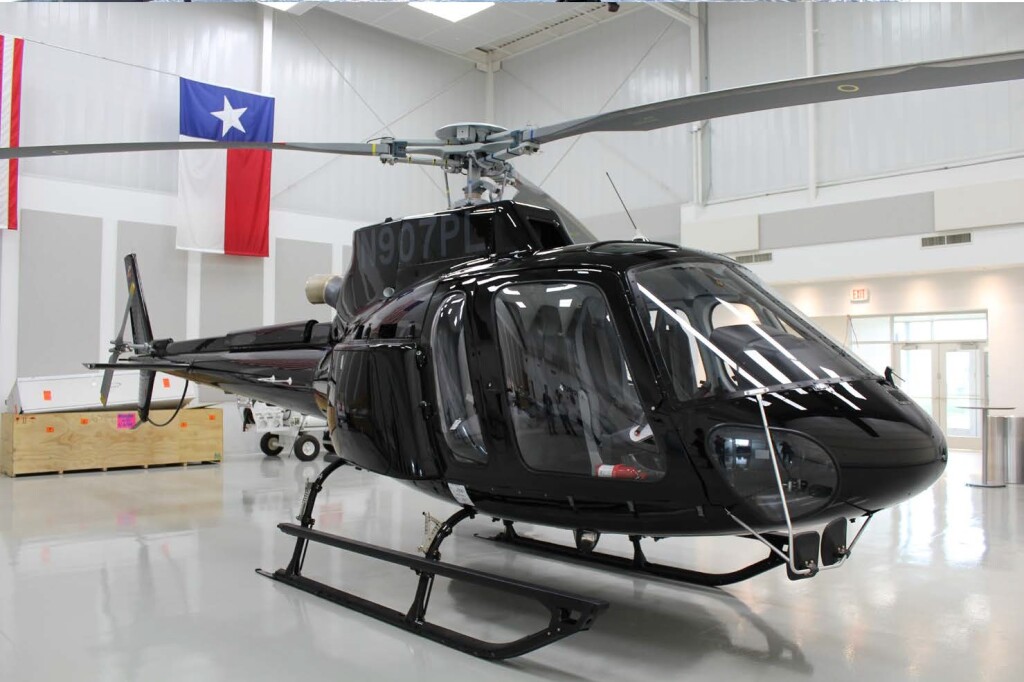 The left seat safety pilot [aged 53, 15,350 flying hours total, 4350 on type, who had flown with the owner for 11.4 hours in an AS350B2 previously] was onboard for insurance coverage purposes and was acting as a safety pilot. The safety pilot was the owner, director of operations, and chief pilot for two different commercial helicopter operators in Alaska that operated several AS350B2 model helicopters.

The right seat pilot-in-command [the owner] planned to drop off the safety pilot in Wasilla, Alaska, then proceed to Anchorage with the [two] passengers [the young sons of the pilot owner].

N907PL was equipped with a Genesys Aerosystems HeliSAS autopilot and stability augmentation system. 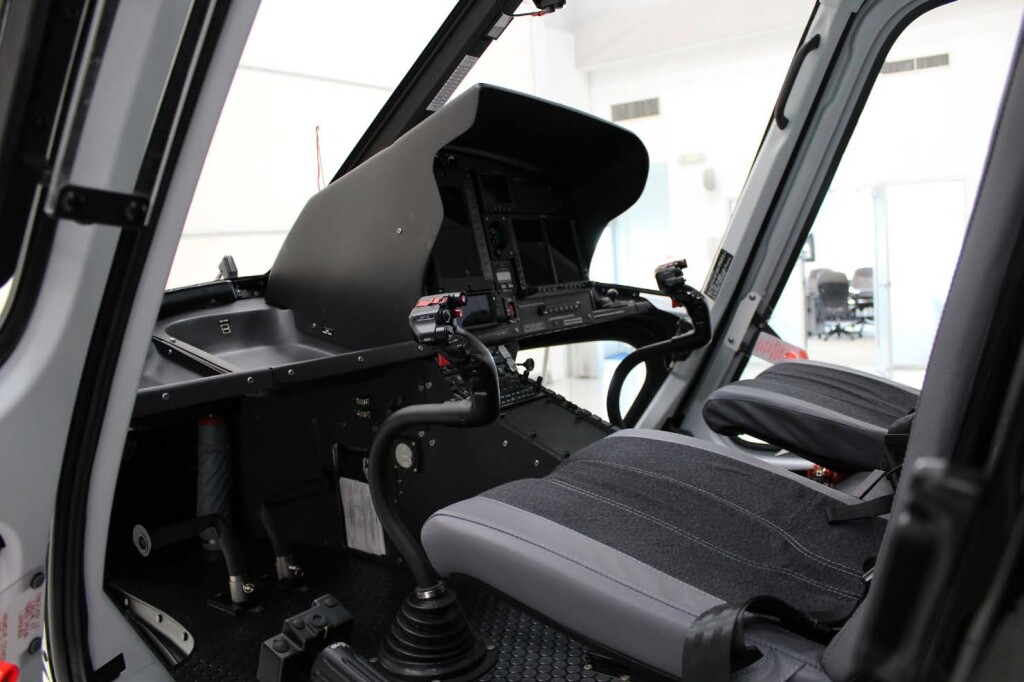 Cockpit of of Airbus Helicopters AS350Be (H125) N907PL Before Delivery (Credit: via NTSB)

The NTSB comment that in an interview after the accident the survivor, a 14-year-old boy, stated that…

This may have course have been the safety pilot checking the owner pilot’s understanding.  Although not mentioned by the NTSB, the survivor also commented that both pilots were aware of a past accident where an object in the cabin caught on flying controls and were very alert to that hazard.

During this trip the helicopter departed Juneau, Alaska that morning bound for Yakutat, Alaska.  It proceeded west over the mountains st 3000-4000 ft AMSL, then north-west along the coast at about 500 to 700 ft AMSL. 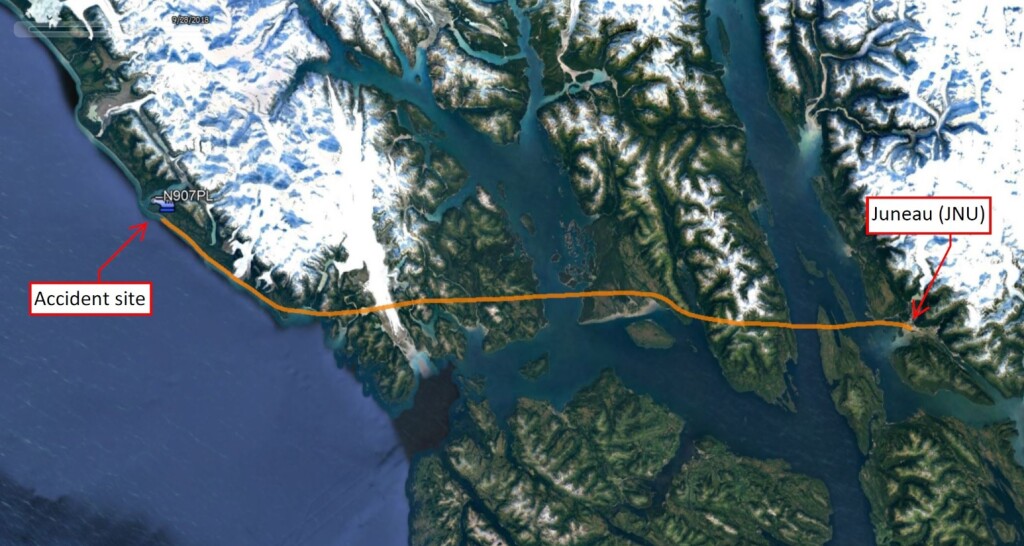 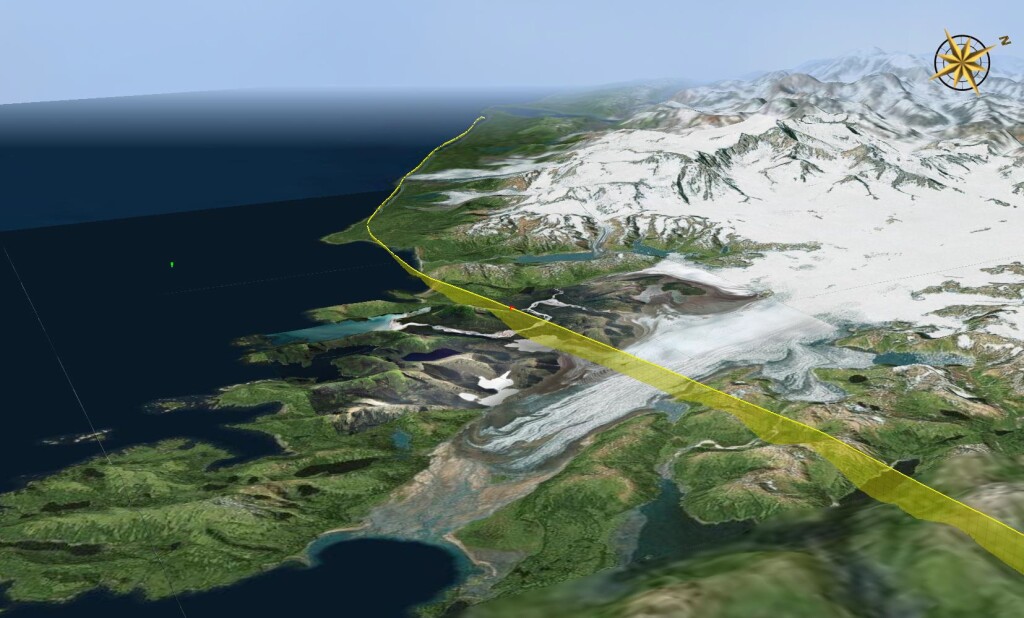 Video from the cockpit image recorder [an Appareo Vision 1000] indicated that the pilot, seated in the right seat, was manipulating the flight controls from takeoff until the accident occurred [there is no mention of the NTSB of any analysis of the audio data recorded]. 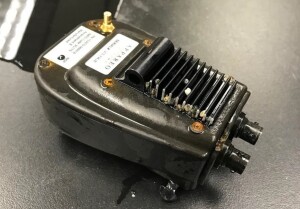 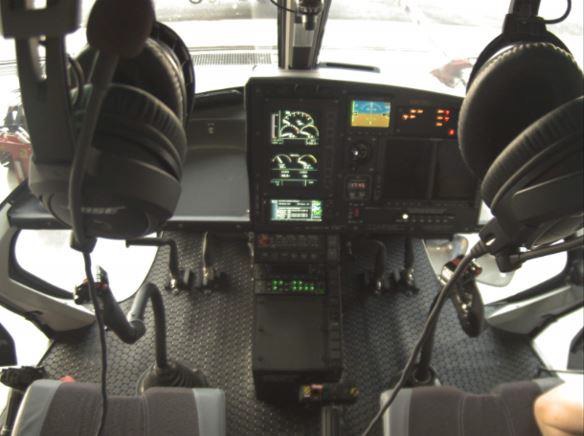 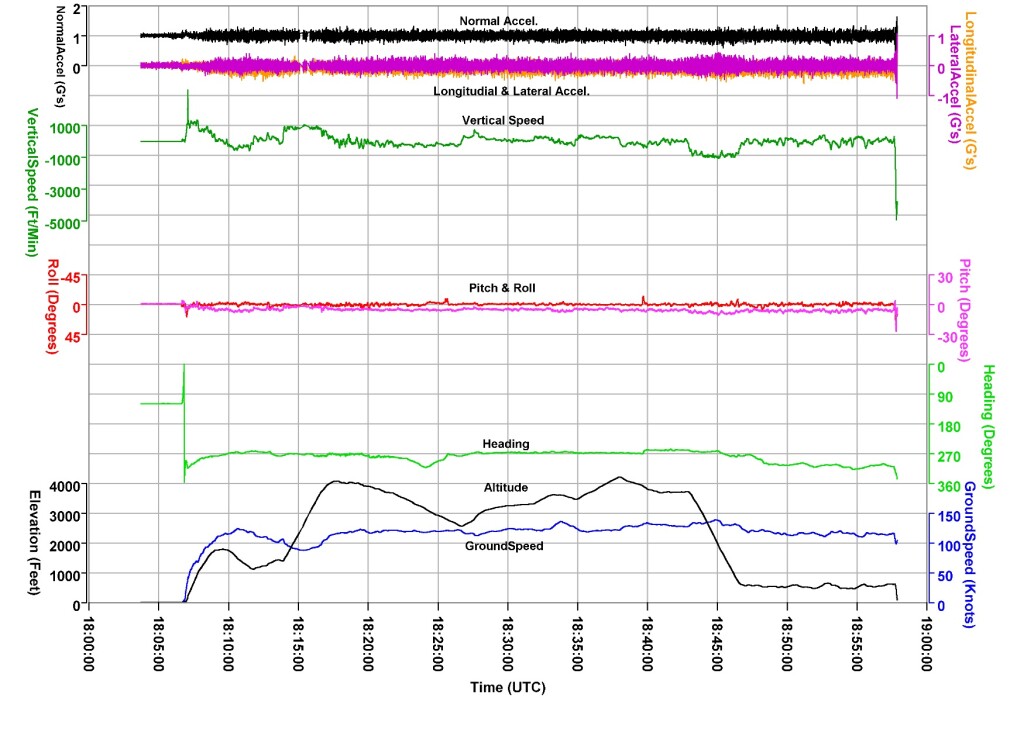 The surviving passenger stated that, while en route, the pilot indicated that they would be landing on a beach in order to stretch their legs.

The recovered data showed the helicopter flying about 500 to 700 ft over water when the pilots began conversing and pointing toward the shore. The safety pilot, whose hands were on his lap, then raised his right hand in a manner that appeared that he was guarding the cyclic control in anticipation that his assistance or intervention might be required. Shortly thereafter, the pilot twisted the collective twist grip throttle from FLIGHT to IDLE; data from the engine data recorder (EDR) indicated that, at this time, the engine fuel control was set to the idle power setting.

Such action is consistent with a practice autorotation.

The collective control was adjusted downward slightly, but the main rotor speed (Nr) gauge showed Nr decay from the normal “green” operating range of 375 to 405 rpm to the “yellow” cautionary range of 320 to 375 rpm about 5 seconds after the twist grip was set to IDLE. An Nr value of less than 360 rpm would have resulted in a continuous aural tone to alert the pilots of the low rotor speed. 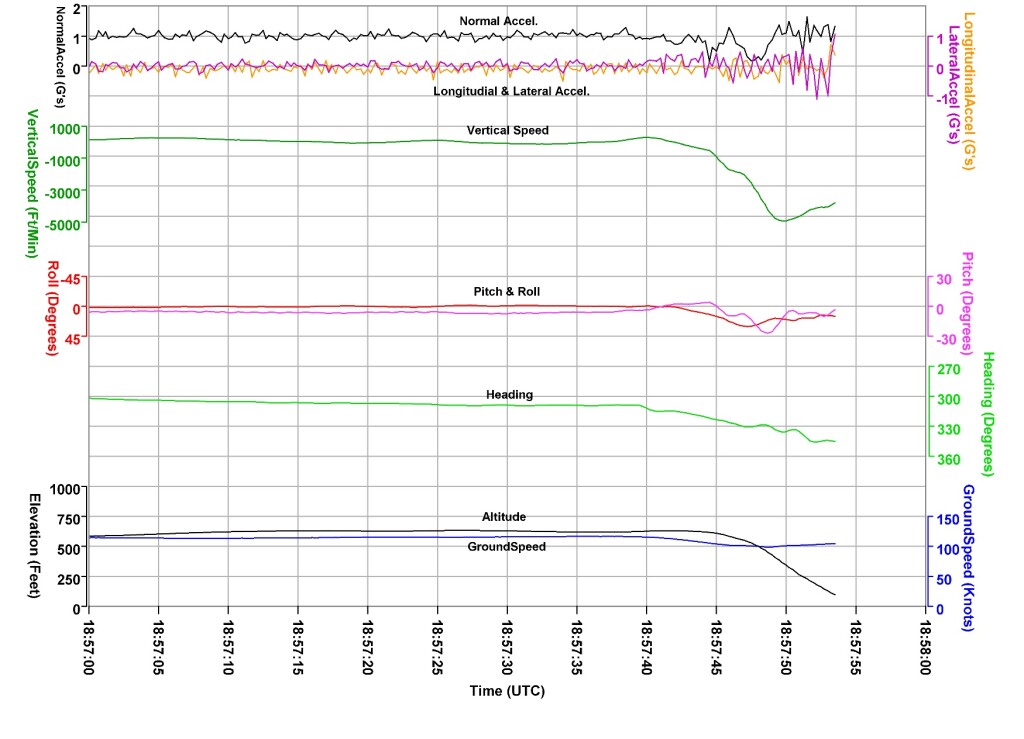 About 7 seconds after the twist grip was set to IDLE, the pilot reached toward the center console, after which the “HORN” caution light illuminated, consistent with the pilot muting the aural tone signaling the low Nr condition. After the horn was muted, Nr continued to decay to a low of 254 rpm. Several small cyclic inputs were observed, then the recorded data ended. 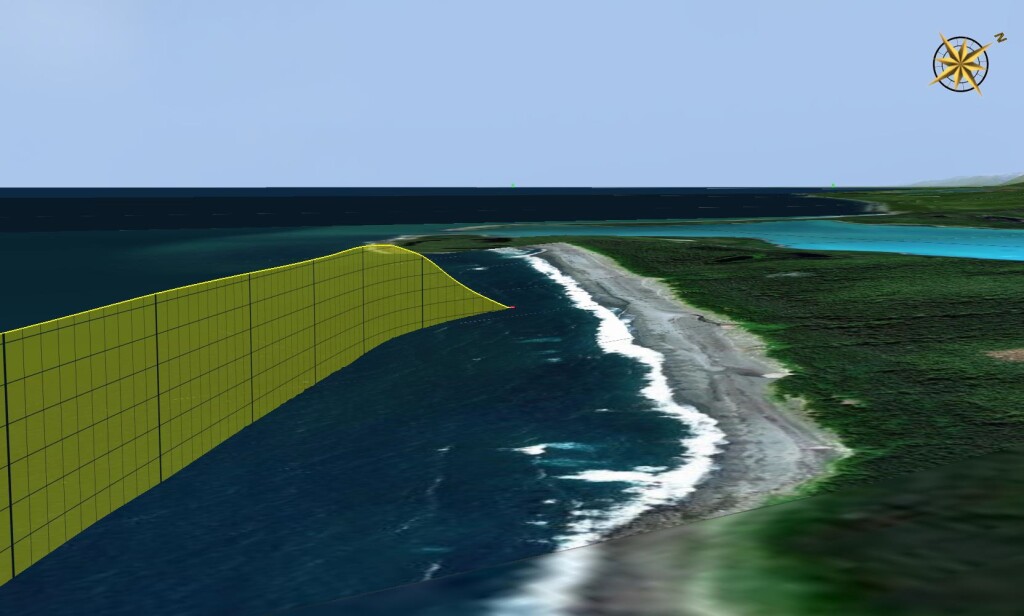 [The survivor] heard the pilot yell “NO” and continue to manipulate the flight controls. He felt the helicopter impact the water and noticed water splash in the cabin before he lost onsciousness. He later awoke in the water and swam to shore, where he awaited rescue. He was unable to locate the other occupants. 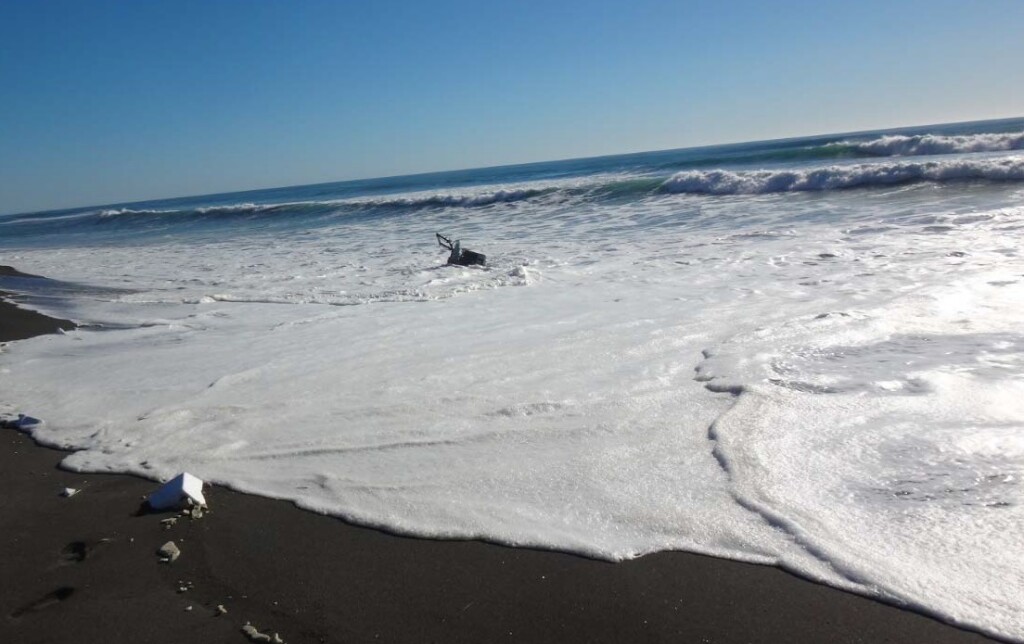 The NTSB state the accident occurred at 10:57 Local Time. No Emergency Locator Transmitter (ELT) signal was detected (one might suppose due to damage to the wiring between the unit and antenna, a sadly common failure in helicopter accidents).

The NTSB do not give further details of the emergency response in their report but local press reports state that the US Coast Guard were not alerted until 18:30 and a helicopter was not dispatched until 20:15, locating the boy about 2 hours later.  The survivor was not surprisingly suffering from hypothermia.

Interview data in the public docket suggests the last satellite tracking signal was received at the safety pilot’s company at 10:51.  They however assumed that the hand held Garmin inReach unit had not been charged sufficiently the previous night and so took no action until early evening when they realised the aircraft had not reached its destination for the day.

Postaccident examination of the helicopter and the recovered data did not reveal any helicopter malfunctions or failures that would have precluded normal operation. 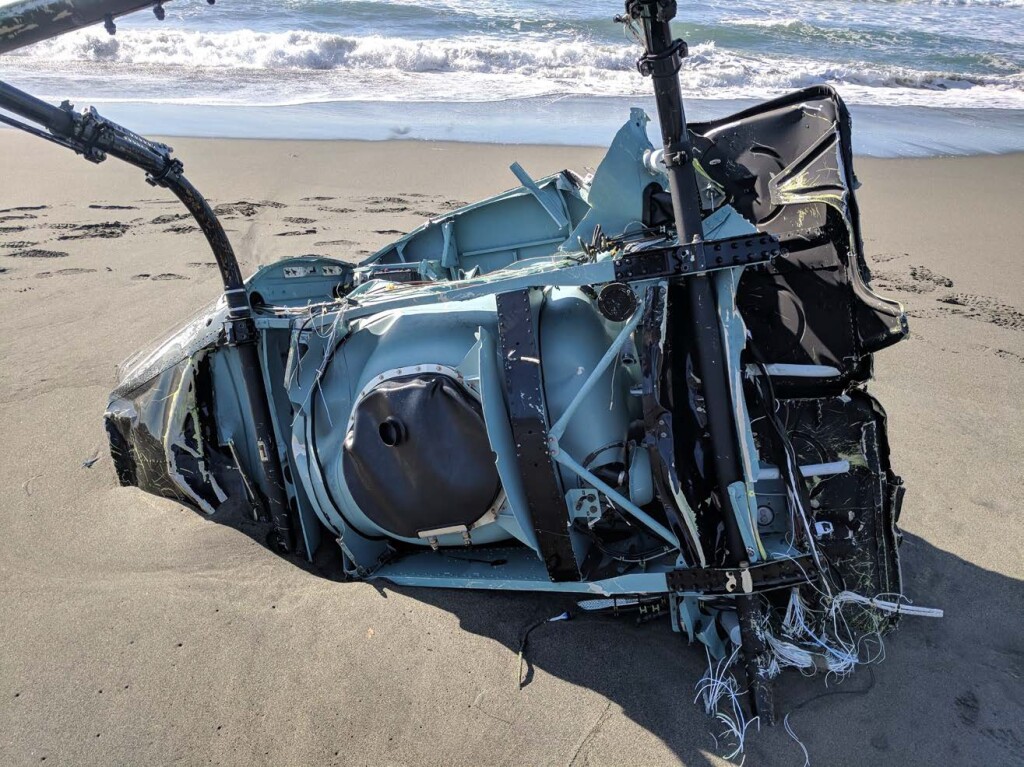 Since recorded cockpit imagery did not capture microphone audio, the reason for the pilot’s decision to roll the throttle to IDLE could not be determined, and what conversations the pilots may have had before and during the maneuver could not be determined. The passengers’ headphones were muted from the pilots’ conversation, and the surviving passenger did not know if they planned to practice an autorotation to the beach.

Cockpit video recordings from previous flights indicated that the safety pilot did not guard the flight controls when the pilot was performing takeoffs or landings. It is plausible that the pilot’s intention was to practice or perform an autorotation to the beach, with the safety pilot guarding the controls. However, the beach was not the most suitable location for a practice autorotation to landing procedure and was out of the ordinary from their previous flights, as observed on the recorded cockpit imagery.

When the twist grip throttle is set to IDLE position during normal flight, Nr will decay unless the pilot takes action to maintain it, such as a reduction in main rotor collective pitch or returning the twist grip throttle to the FLIGHT position. However, after the throttle was set to IDLE, the pilot failed to reduce main rotor collective pitch, which resulted in low rotor rpm. The pilot’s action of muting the low rotor rpm alert horn indicated that he was aware of the annunciation to an anomalous condition, but it could not be determined if the pilot understood the nature of why the horn annunciated or the criticality of the situation. 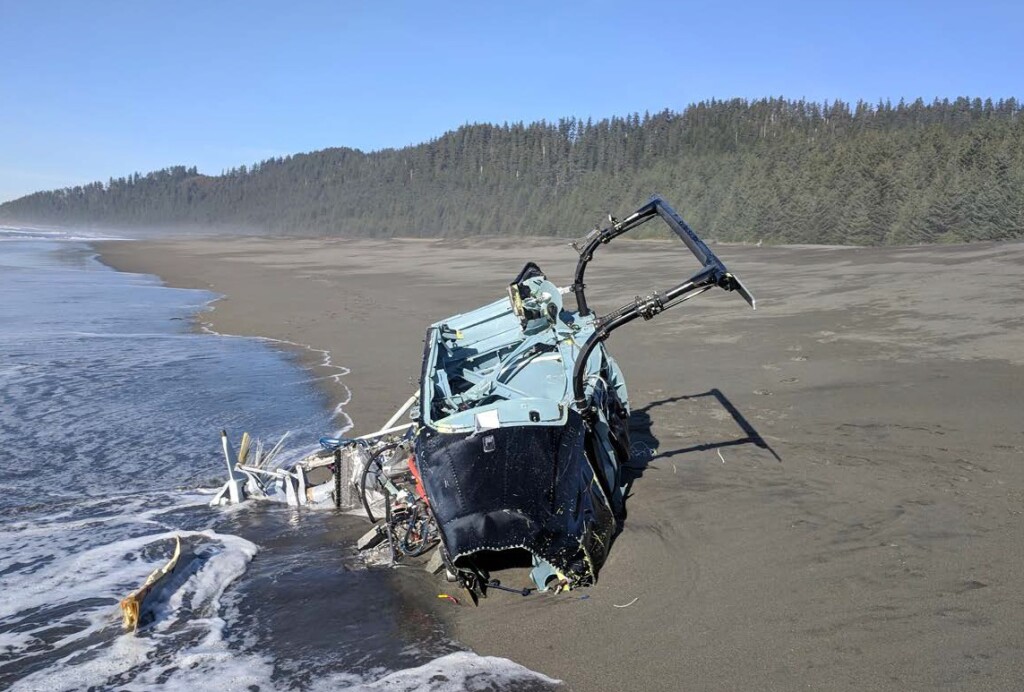 The pilot’s failure to maintain main rotor speed after setting the engine fuel control to idle, which resulted in a loss of helicopter control and impact with water.

Current helicopter accident / incident statistics indicate that the greatest exposure to accidents or incidents is during simulated EOL. The purpose of this Safety Information Notice is to raise the level of awareness of Flight Instructors involved in simulated EOL training and to stress on key points.

It included recommendations that minimal crew be onboard during training, and that a power recovery be initiated as the helicopter passed through 200 ft agl.  It also recommended: