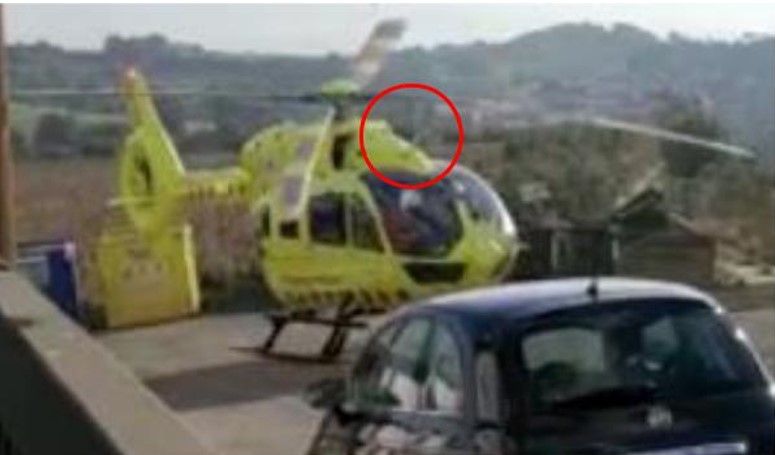 The Spanish Comisión de Investigación de Accidentes e Incidentes de Aviación Civil (CIAIAC) explain in their safety investigation report (issued in July 2021) that the aircraft had departed Taulí hospital, Sabadell at 10:24 Local Time on a HEMS tasking to attend to a casualty who had fallen 3 m. 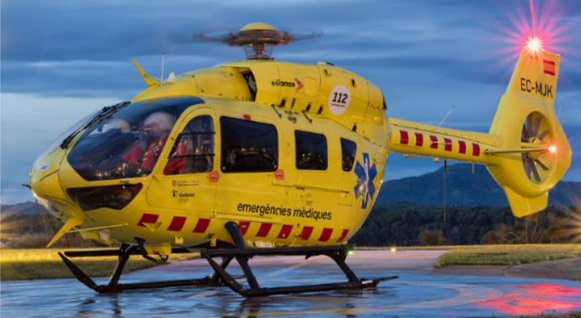 The original intent was to land on football pitch 300 m from the casualty, however:

During the flight, the medical team requested the pilot to land as close as possible…  [On arrival on scene at] 10:36:37 h, the HEMS TCM identified the house of the person to be assisted.  Winds in the area were light, with speeds of between 5 and 8 knots from a 240º direction.  Visibility was good.

The pilot replied that…he would have to go around to turn into the wind. He also mentioned that there were rubbish containers and a cable in the vicinity of the patient’s home. Another option for the landing was a nearby field, but the pilot ruled it out as it was fenced off. 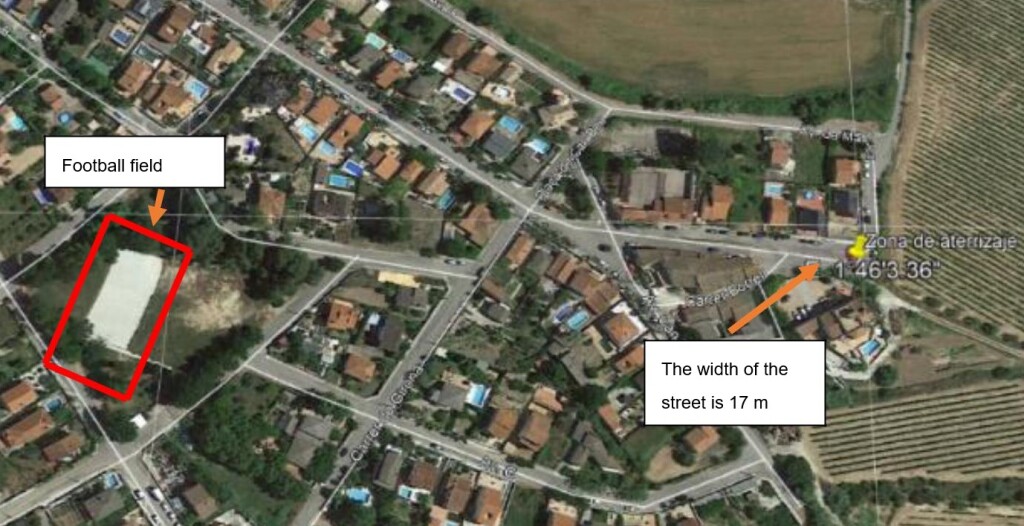 The pilot decided to land in the area close to the patient’s home, just behind an ambulance.

This was on a 17 m wide street.  As the D value of the H145 is 13.64 m, and the operator required landing sites to be 2D or greater, the chosen site was too small.  It was also excessively sloped. 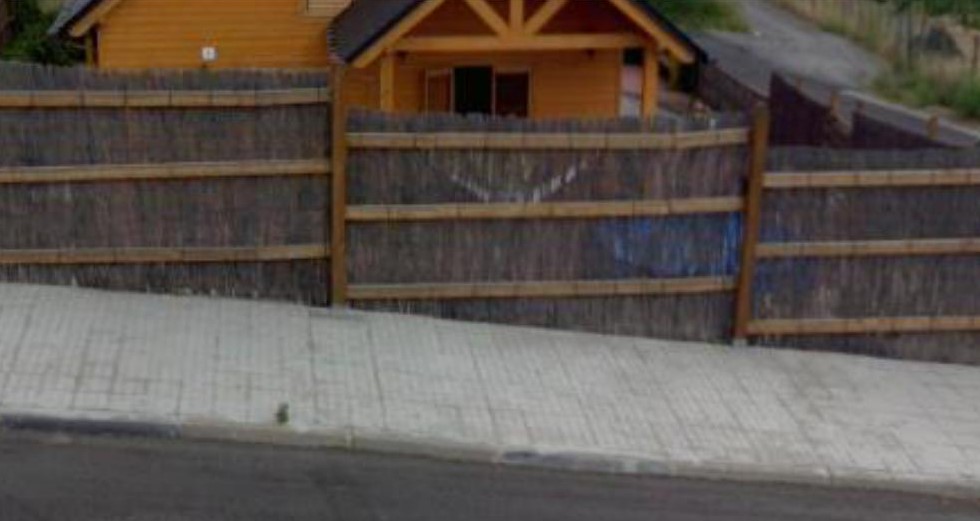 The Flight Manual slope limits are

During the landing, the HEMS technical crew member, the doctor and the nurse helped the pilot to monitor the cables, poles and the position of the rubbish containers.

The slope in the chosen area exceeded the established limits, causing one of the main rotor blades to hit the upper cable cutter when the pilot lowered the collective to settle the aircraft after touch down.

The damage extended to the cable cutter system, one main rotor blade, the front left cockpit window and one skid strut. 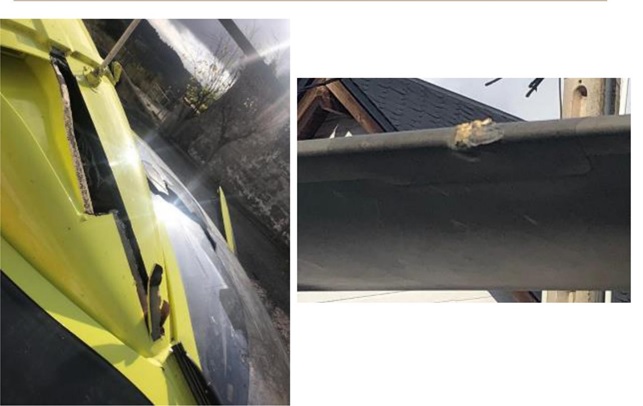 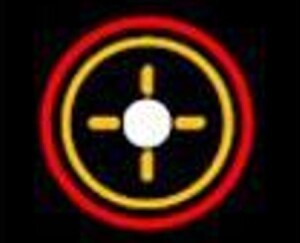 The mast moment indicator limits are as follows:

The audio warning “MAST MOMENT” is emitted when the red circumference limit is exceeded.   The helicopter is also equipped with a one-dimensional indicator: 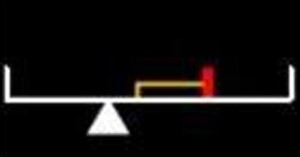 The pilot has to decide which direction to move the cyclic in order to reduce mast moment.

Analysis of the Flight Data Recorder (FDR) showed that:

At the point of landing, there were three pronounced longitudinal pitches (reflected in rapid variations of the PITCH ANGLE parameter, between -0.14º and + 13.48º).  In the first one, the PITCH ANGLE rose sharply from -0.14º to + 10.31º; in other words, the helicopter tilted its nose upwards. The pilot had moved the cyclic control to an advanced-forward position (up to -20%). With the aircraft in contact with the ground, this cyclical position produced a MAST_MOMENT of 98%, activating the MAST_MOMENT_EXC alert one second later.

The helicopter then pitched two more times. The pilot kept the cyclic control in an advanced-forward position. The MAST_MOMENT ranged from 70% to 98%. The aircraft slipped backwards. When the pilot lowered the collective to settle the aircraft, one of the main rotor blades struck the helicopter’s upper cable cutter (coinciding with the extreme values of the longitudinal, lateral and vertical accelerations), and the noise of the impact can be clearly discerned in the recording from the cockpit voice recorder. The impact causes the aircraft to slip backwards again.

An individual recorded the helicopter landing with a video camera.  [It] shows the aircraft landing at an angle to the longitudinal axis of the street (about 10º to the left of it). This complicated the manoeuvre even further, as the surface was sloping both longitudinally and laterally. In this case, the proximity of the main rotor to the side walls of the street could have produced an added destabilising effect.

The following images, taken from the video, show the rotor blade striking the upper cable cutter. The cable cutter was ejected by the rotor after turning approximately 270º with the blade that struck it. The red circle indicates the position of the cable cutter at different moments. 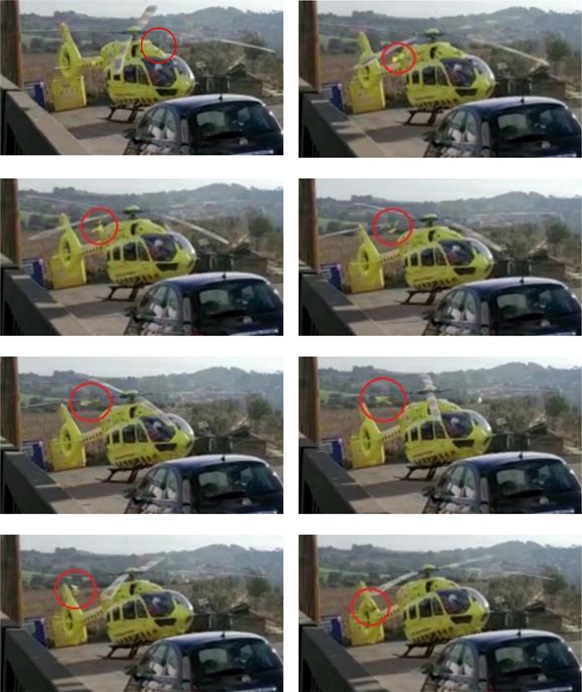 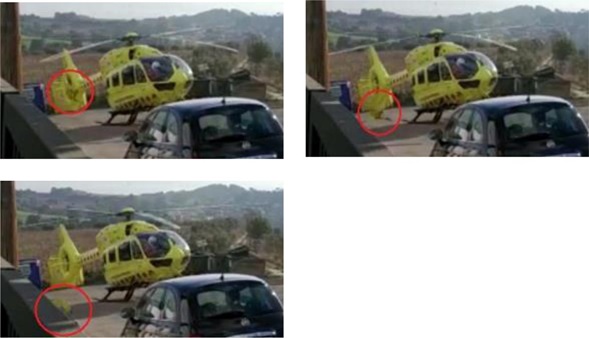 As can be seen in the recording, the pilot was unable to set the helicopter skid down correctly on the ground due to the sloping terrain during his first attempt.

On the next attempt, the helicopter pitches, and the pilot overrides the movement by lowering the collective. The rotor disc lowers, and the fuselage rises, causing one of the main rotor blades to impact the upper cable cutter.

…the aircraft operator had provided training and established procedures for the proper selection of a landing site.

Extracts are provided in Appendices to their report.

Crucially they note that while the pilot carried out an adequate high reconnaissance orbit, he did not complete the low reconnaissance required in the operator’s procedures.

An internal safety investigation by the operator concluded:

The crew…neglected to identify the sloping terrain at the chosen landing site in sufficient time, focusing their attention on the obstacles in the area instead. The number of obstacles to be monitored generated a saturation of tasks for the crew, leading to a loss of situational awareness due to an excessive external focus.

They  elaborate this was…

…believed to be related to the pressure the medical team placed on the crew, given their concern for the patient’s condition.

The operator’s report goes on…

…the pilot did not make the necessary cyclic corrections during the first full skid landing and induced a sequence of two oscillating movements that ended with a loss of control and the rotor impacting the upper cable cutter.

The pilot noted that…

…as part of his recurrent training, training for slope landings only using the flight simulator was received.

…certain manoeuvres, such as landing on slopes, cannot be adequately trained in a flight simulator, as explained in the document “Teaching and Testing in Flight Simulation Training Devices (FSTD)” prepared by the EHEST group.

Furthermore, the aircraft operator has identified the exclusive use of simulator training for HEMS pilots as a contributing factor in this accident and has decided to reinforce the training of its BK117 D-2/EC145 pilots by including at least one flight instruction session on slope landings and mast moment management.

The accident occurred as a result of landing…in a confined area with a slope that exceeded the established limits.