On the night of 11 February 2021 Airbus AS365N3 F-GYLH nearly collided with the surface of the sea off Le Havre during a Marine Pilot Transfer (MPT) flight with 4 people on-board.  The BEA (the Bureau d’Enquêtes et d’Analyses pour la sécurité de l’aviation civile) issued their safety investigation report (in French only) into this serious incident on 10 February 2022 that highlights issues of automation use in a high workload flight. 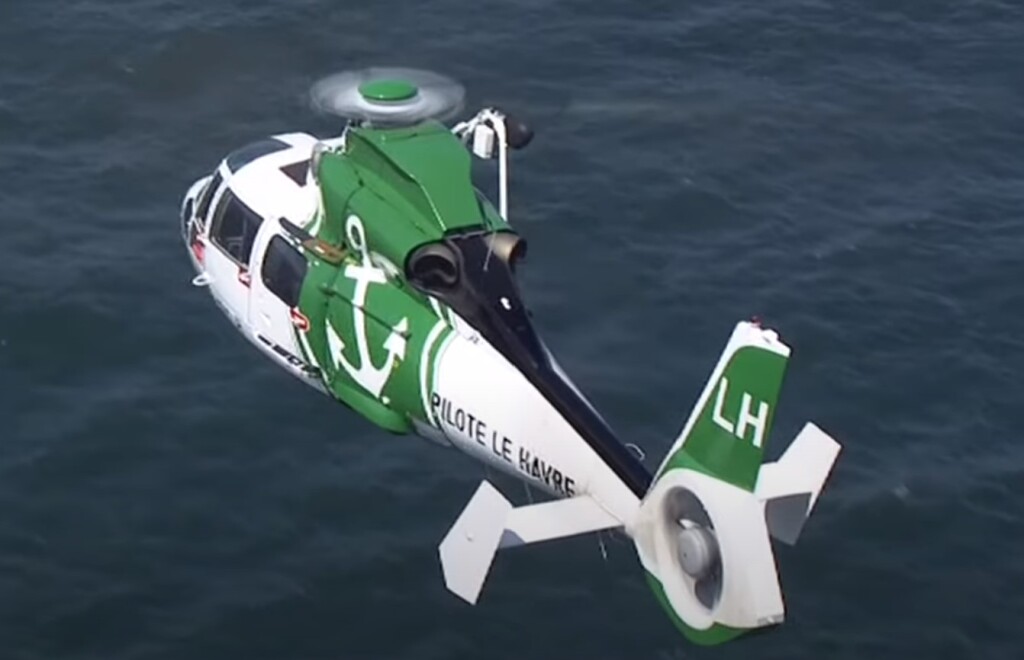 The helicopter was operated by the Le Havre-Fécamp Pilot Station.  Dating from the 16th century, that organisation provides pilotage for ships visiting Le Havre, Antifer and Fécamp.  They use both launches and their own AS365N3 for marine pilot transfer.  They first introduced helicopter in 1976, an Alouette III.  They did suffer a fatal accident on 8 September 2005 when their previous AS365N3, F-GYPH, collided with the surface of the sea at night off Cape Antifer.  It was manoeuvring to rendezvous with a tanker that has entered a fog bank.  In the 2005 accident the contributory factors identified were, the pilots “overconfidence”, “uncorrected behavioural deviations” (such as the pilot not routinely wearing his seat harness) and “a management structure that did not allow sufficient surveillance of the activity to be exercised”.  After the 2005 accident procedures for the use of autopilot upper modes were reportedly enhanced and greater emphasis made of crew resource management with the hoist operator.

The Pilot Station is a form of collective, managed by an elected President.  The President is the Accountable Manager for the purposes of European Regulation (EU) No. 965/2012.  According to the BEA the operation is treated as non-commercial air transport operation under Part-NCC and Part-SPO for the hoisting operations.  Although not required by Part-NCC, F-GYLH was equipped with a combined CVFDR (a Honeywell ARCOMBI) as a learning from the 2005 accident.

The Pilot Station employed two helicopter pilots.  One was also the Flight Operations Manager and the other the Safety Manager.  The aircraft was maintained by two engineers, who were also trained as the hoist operators i.e. Technical Crew Members (TCM).  The Head of Compliance Control was a part-time, outsourced role.  The BEA do not comment on the management of Flight Training or Continued Airworthiness.

The BEA explain that in 2019, due to a shortage of engineers, four having resigned over two years, flight operations had been paused for a period.  The February 2020 annual internal audit had identified…

…a significant decrease, over the 2019 period, in the level of performance of the helicopter department and the aircraft dispatch rate, with numerous machine stoppages for technical and human reasons. At the same time, a significant increase in non-conformities is noticeable in the present audit in contrast to the previous one…

…a slow but certain drift of the operational standards of the exploitation, a reduction of the attention during the times of duty, a professional disengagement of the crew members, creates blocking points in the daily operation and fosters a confrontational environment.

The report acknowledged that meetings had been held to attempt to resolve the issues but it was a lingering issue.  The issue had been raised during audits by the regulator and in particular the specifics of hoist operator training (topical due to the turnover in engineer / hoist ops).  The BEA note that no specific action was taken by the regulator.

The President (and Accountable Manager) however changed in April 2020.  The next annual internal audit (in November 2020) stated there was…

…a real improvement in the operator’s performance and a significant reduction in the number of non-compliances… More importantly, the change of Accountable Manager…was an opportunity, a new impetus, renewing with a culture of listening and taking into account the technical team.  The risks identified the previous year, mainly related to tensions between the technical team and the executive, are, for the most part, in the process of self-mitigation due to the return of collaboration between the two parties.

The BEA however note that “certain social difficulties continued” in particular that the engineers recruited had no prior hoisting experience.  The Flight Operations Manager also expressed concern over this to the BEA.

The helicopter departed Le Havre-Octeville airport for a night VFR flight at 19:49:19 Local Time (civil twilight ended just over an hour earlier, there was a new moon and altocumulus at 10000 ft).  On board were a single pilot, a hoist operator sat in a central seat in the cabin and two marine pilots sat in the rear row of cabin seats.  The marine pilots were destined for two oil tankers approaching Le Havre.

The pilot on this flight was the Flight Operations Manager.  He was 59, had started his career in the military and had flown for the Pilot Station since 2000 (the same year the pilot in the 2005 accident joined).  He had 6650 hours of experience (including 16700 hoist cycles), 5250 hours on type an 1802 hours at night.  The hoist operator was a Part-66 licenced engineer recruited in March 2020 with no prior hoist operator experience.  He had been trained by his predecessor but expressed concern to the BEA that he was now also expected to train the next new recruit from scratch.  At the time he had 112 hours of experience, all on the AS365N3, 50 at night, with about 600 hoist cycles in that time.

Shortly after take-off the helicopter pilot made a radio call that “we take off in 04, climb 700 ft, left turn heading 270, distance for 10 nautical miles”.  Then at 19:49:42, passing through 760 ft, the ‘HDG’ heading tracking autopilot upper mode was engaged and the helicopter turned left towards the heading 270° that had been selected by the pilot.

Crucially the pilot thought he had simultaneously also engaged the ‘ALT’ altitude hold mode, which was not the case.   The BEA observe that the Operations Manual (OM) states:

The use of the higher modes is a valuable aid to piloting, particularly in IMC, degraded or night conditions. However, special attention must be paid to their management in order to avoid confusion of use between the two modes or forgetting during a critical phase of flight.

It is also a requirement in OM Part A 8.3 in cruise that the pilot verbalise the mode selection and the hoist operator then verbally confirms they have checked the selected modes.  However, the crews explained to the BEA that in practice OM B Checklists were used and these did not include that check, because the cruise phase was so short in their normal operations that cruise checks were omitted  The BEA also noted that the checklists were used as to-do lists, memorised by the hoist operators, rather than used as a challenge and response tool.

Without the ALT mode being engaged, the helicopter began to descend during the turn, a descent that was not sensed by the helicopter pilot.  The helicopter pilot recalls seeing neither the coastline or any lights on the surface but commented to the BEA that “at night, he flies on instruments, his head in the cockpit most of the time, without looking outside”.

At 19:49:55 (just 36 seconds after take off), the helicopter pilot contacted the radio operator of first tanker and a dialogue ensued concerning the position and heading of tanker and helicopter, lasting about a minute. The hoist operator was focused on the position of the tanker too, looking at a display of maritime Automatic Identification System (AIS) data and the weather radar display. 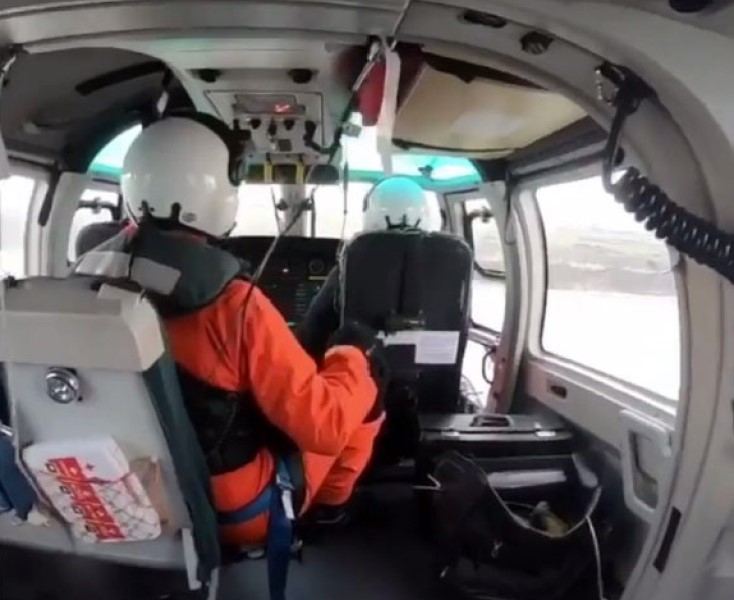 The hoist operator also discussed the vessel position with the helicopter pilot at this time.

The operator’s procedure was that at night a Decision Height of 500 ft would be set on the right hand RADALT and 300 ft on the left hand RADALT (both would be 300 ft in the day).

At 19:50:36 the helicopter descended through 500 ft. This triggered an aural tone and a yellow light on the right hand RADALT.  These indications occurred during the dialogue about vessel position and were missed by the helicopter pilot.

At 19:50:52 the helicopter descended through 300 ft, indicating the descent rate was now c740 ft/min, triggering the left hand RADALT.  Again the aural tone coincided with radio communication and the yellow light is even more difficult for to see on a RADALT mounted across the instrument panel from the pilot.

The lowest height recorded was 59 ft (although the investigators note the Honeywell recorder had suffered numerous data recording interruptions) and the speed had reached 158 knots (8 knots above VNE [velocity never exceed]).  The VNE was lowered in 2008 by EASA Airworthiness Directive AD 2008-0204 after reports of horizontal stabiliser fractures on AS365N3 due to vibration at high speed.  This limit could be raised on embodiment of Service Bulletin AS365-55.00.06, but this was not fitted to F-GYLH.

Perhaps surprisingly, the flight continued and the marine pilots were hoisted at 19:55 to the first ship after an Airborne Radar Approach (ARA) and 19:58:50 after a visual approach to the second tanker, before landing back at Le Havre-Octeville at 20:07. 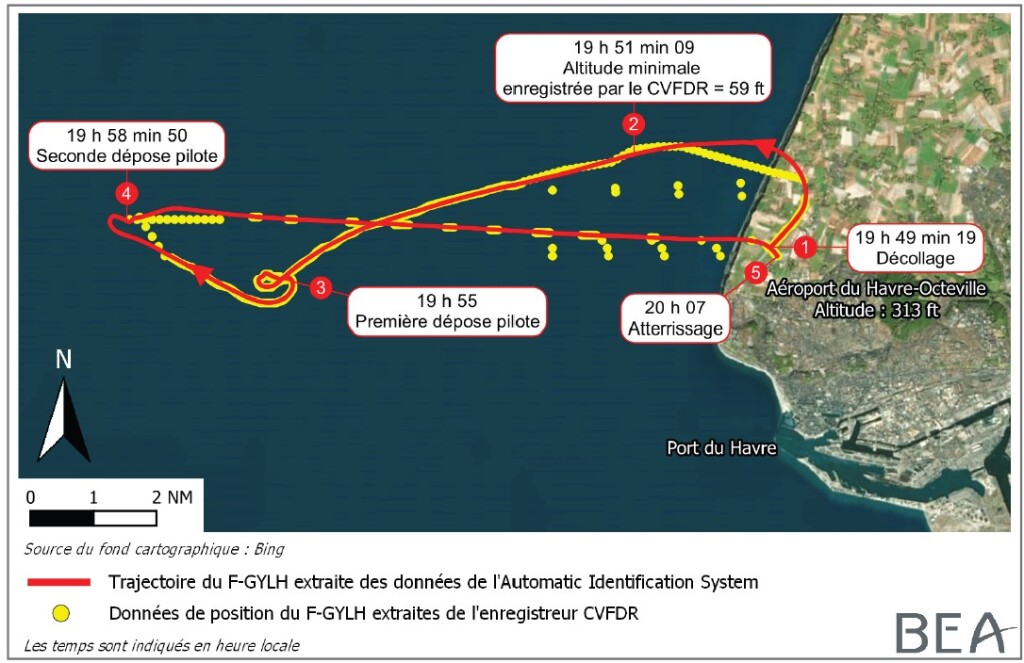 The BEA summarised this as a “short, routine single-pilot flight on a complex aircraft…during a dark night” and concluded the following factors contributed to the near collision with the surface of the water:

Some of the organisational factors had been identified in advance, but by the time of the accident had only been partly addressed.  Since the serious incident occurred the following actions had been taken:

The European Safety Promotion Network Rotorcraft (ESPN-R) has a helicopter safety discussion group on LinkedIn.  They have published: Safety Leaflet HE9 Automation and Flight Path Management

ESPN-R has published a training guide for hoist operators. 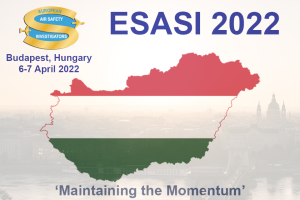 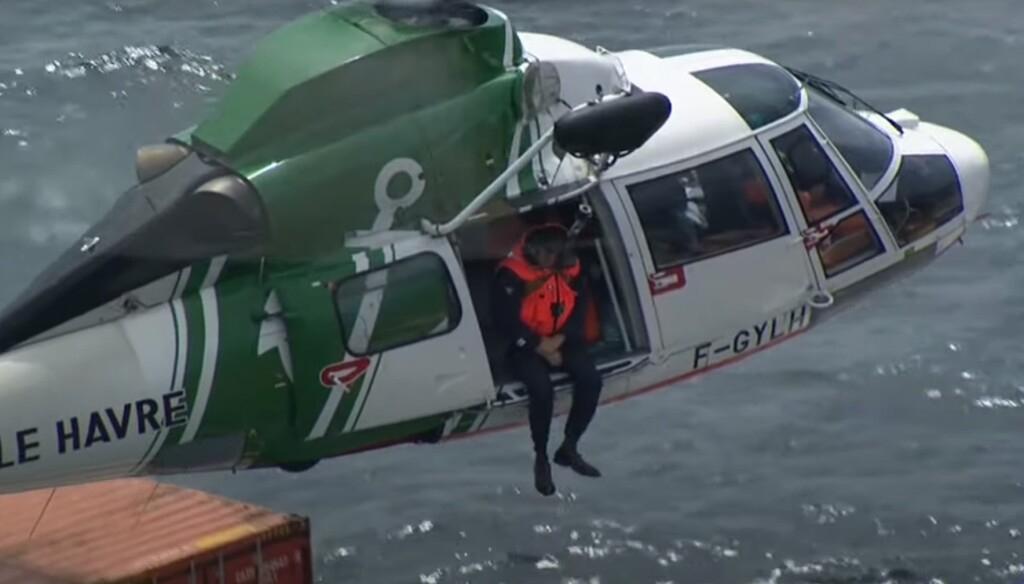