On 28 January 2018 air ambulance Airbus Helicopters EC130T2 N894GT of  Air Evac Lifeteam was damaged in a hard landing after it inadvertently became airborne while on the elevated landing site at Memphis Regional Medical Center in Tennessee.  None of the 4 occupants were injured but impact was hard enough to spread the skids, caused minor structural damage and set off the Emergency Locator Transmitter (ELT). 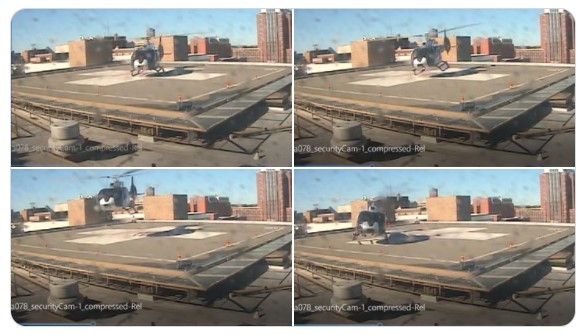 The US National Transportation Safety Board (NTSB) has so far only issued a factual report, although but some additional data is available in the NTSB Public Docket.

The 58 year old pilot pilot had 6267 hours total time, but only 9 on type. having completed a 5 day EC130 course at Airbus in early November 2017.  His last proficiency check was 11 days earlier.  According to the NTSB:

After landing, he started the after-landing portion of the checklist, then turned the throttle twist grip on the collective from “FLY to “IDLE,” believing [our emphasis] that he had engaged the collective lock.

He then turned the horn mute switch to mute, grabbed the cyclic pitch control with his left hand, and reached for the clock start button with his right hand.

As he was reaching for the clock button, the collective “popped up,” and the helicopter became airborne. He immediately grabbed the cyclic with his right hand, the collective with his left hand, and twisted the twist grip to “FLY.” The helicopter then landed hard, and the emergency locator transmitter (ELT) activated. After exiting the helicopter, the flight nurse advised the pilot that there was damage to the sheet metal of the helicopter. 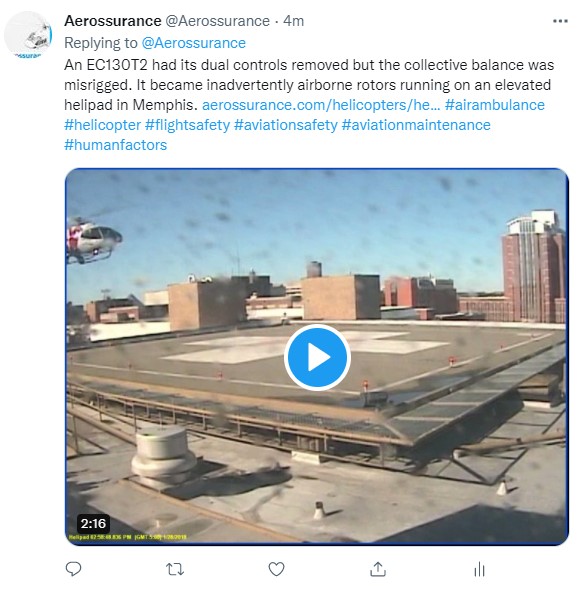 Review of the onboard video depicted a series of events consistent with the pilot’s statement.

Review of EDR data indicated that, during the incident portion of the flight, the recorded transducer position for the collective showed the collective rising from an unlocked position with the helicopter’s engine transitioning from “Idle” to “Flight.”

The EC130 can be converted between a  dual-pilot configuration (e.g. for training) to a single-pilot configuration.  Two days earlier, a mechanic at the Air Evac base at Jackson, Tennessee had removed the right seat dual controls to reconfigured the helicopter for single-pilot operation.  When an FAA inspector examined the aircraft…

The maintenance manual describes the process for “Adjustment – Collective Stick Balance” (extracts are within the Public Docket).  The implication of this investigation finding is that the rebalancing was either not conducted when the dual controls were removed or that it was not completed successfully.

The operator has changed their abbreviated checklist for the EC130T2, so that the first item after landing is to roll the twist grip to “IDLE” and then place and confirm the collective pitch is “Down/locked.” A “NOTE” has been added to
“Visually and verbally confirm collective is locked.”