On 4 June 2017 TAROM ATR 42-500 YR-ATB suffered a runway excursion on landing at Chisinau airport, Moldova.  The authorities of the Republic of Moldova delegated the investigation to the Romanian Civil Aviation Safety Investigation and Analysis Authority (AIAS).

AIAS explain in their safety investigation report (issued on 30 September 2020) that the approach was to be performed by the First Officer, as the Pilot Flying (PF), however the Aircraft Commander was required by SOPs to take control at 70 knots for braking and steering the aircraft.

During the ILS approach to runway 08 the aircraft was configured with flaps 35º, was stabilized, maintaining an indicated speed between 114 – 120 kt.

…at 15:11:47 the aircraft touched down the runway on both main landing gears. [However], the aircraft did not maintain the runaway centreline, and made a runway excursion on the right side. 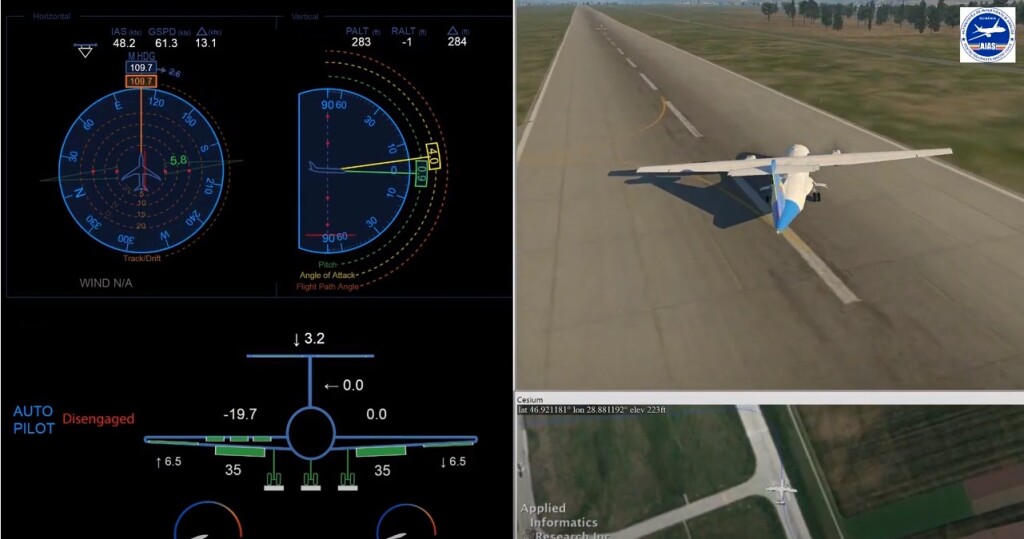 After a roll of about 90 m on the grass, the crew managed to put the aircraft on the concrete surface of the runway by using the aircraft’s control surfaces (rudder and ailerons) and applying a differentiated thrust of the engines (left engine in Ground Idle and right engine in Flight Idle). 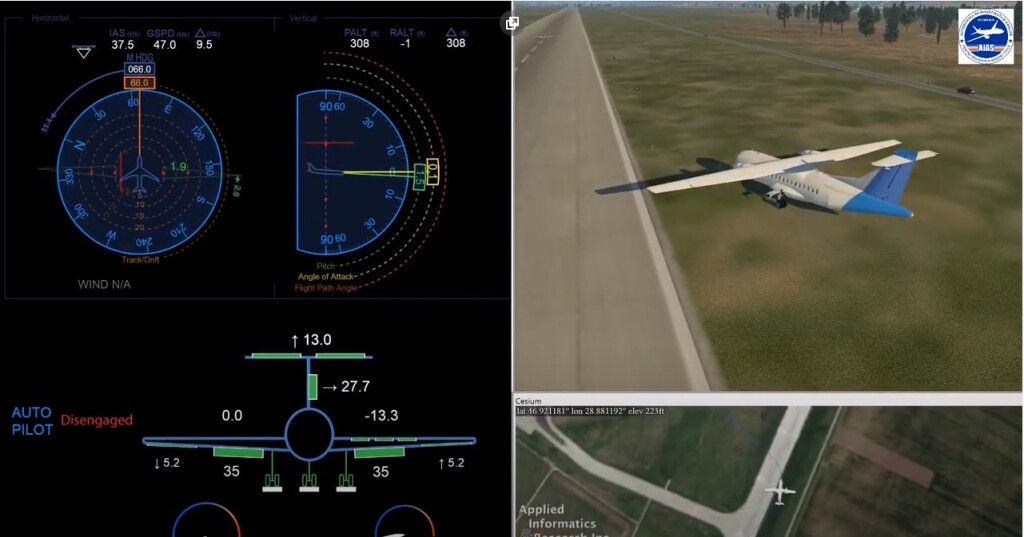 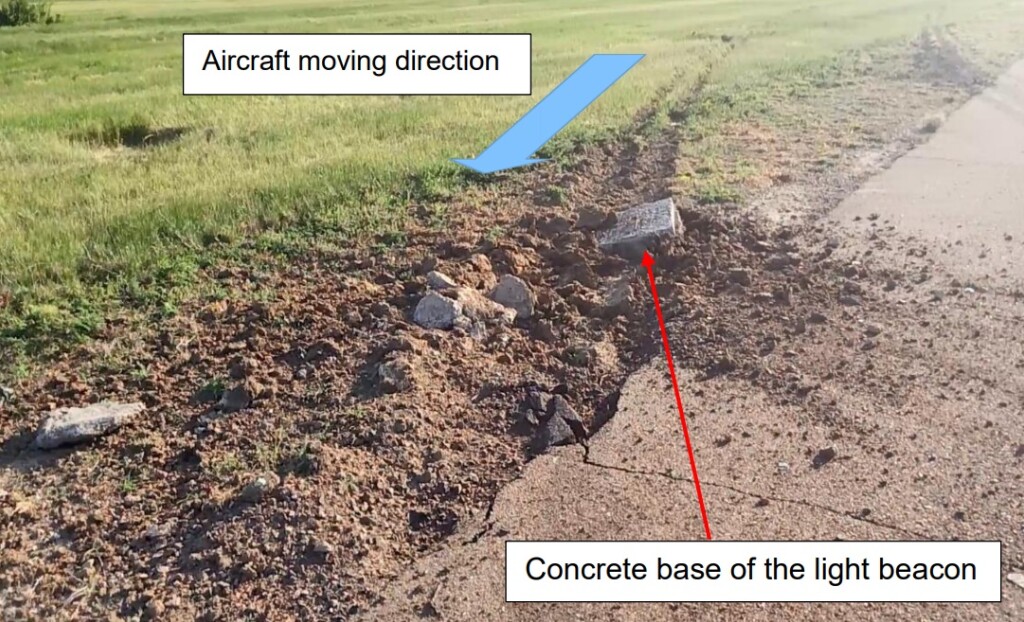 The aircraft made a sharp turn to the left, crossed the runway and exited on the opposite side… 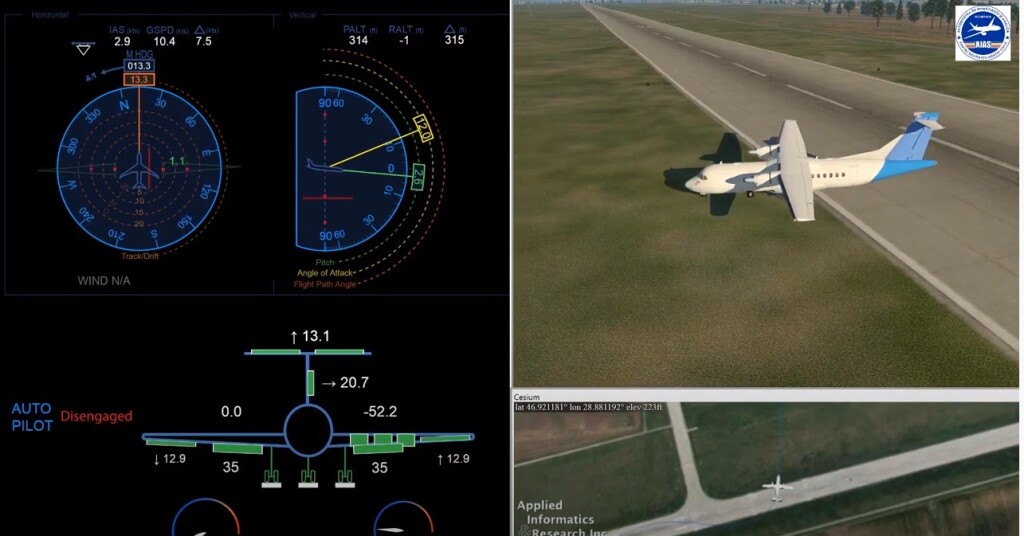 …stopping with the landing gear on the grassy surface on the edge of the runway.

The occupants were uninjured.  The landing gear, wheels, brakes and tyres had to be replaced.

The investigators created a reconstruction video:

…ranging from maximum left to maximum right. Within 15 seconds the rudder was actuated to maximum values three times in a row (left 4 s – right 3 s – left 8 s). The rudder pedal controls are initially used to keep the aircraft on the runway axis and any deviation must be corrected by smoothly amplitude inputs.

They also observer that:

In practice, First Officers, even when they are PFs, do not operate the aircraft’s brakes after touchdown, the braking being done exclusively by the pilot in command. This practice is probably also used due to the fact that the ATR-42 aircraft rarely uses the braking system, immediately after touchdown, reducing the speed to the value of the runway clearance speed being ensured by the available runway length and the power levers retraction from Flight idle to Ground idle.

The AIAS also found that during the approach the flight crew did not perform the Descent Checklist.

Checklists are standard operating procedures provided in the operator’s Operations Manual, which provide actions to be followed before, during and after the critical phases of the flight (take-off, landing), as well as in emergency situations.

The moment of uncertainty related to whom had the aircraft control was generated by the fact that the crew did not perform the Descent Checklist and did not establish the time and manner of taking the aircraft command by the pilot in command.

Significantly they also observed that:

From the investigations of serious incidents involving other ATR aircraft of the same operator, it was found that the fact of performing superficial checklists or no checklists at all, during certain flight stages, has become a fairly common practice among crews, a practice caused by routine.

In other words they suggest a cultural issue. The investigators considered the ATR Flight Crew Operating Manual (FCOM) guidance on crosswind landings to be adequate.

The probable cause of this serious incident is the inadequate operation of the control column and rudder pedal after the aircraft touchdown, which led to the partial loss of aircraft control during rolling and to the impossibility of maintaining it within the runway rolling surface limits.

Contributing factors were the:

Two recommendations were directed to TAROM;