At 21:10 Local Time on 6 October 2021 air ambulance Bell 429 N505TJ of Mercy Flight was damaged near Genesee County Airport, Batavia, New York (midway between Buffalo and Rochester).  Neither the pilot or the three medical personnel onboard were injured.  Mercy Flight are a not-for-profit air ambulance operator that have transported 30,000 patients over 40 years. 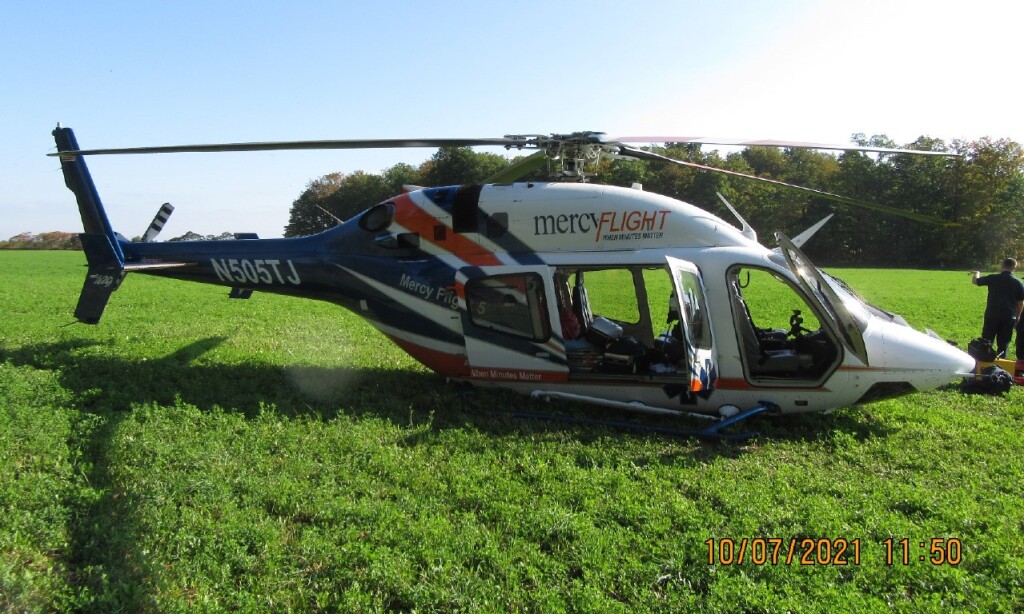 Information released by the US National Transportation Safety Board (NTSB) in their public docket on 4 January 2022 reveals that the aircraft had been tasked to collect a patient and deliver them to Strong Memorial Hospital, Rochester, New York.  A short 10 minute third sector was necessary to return to their home base at Batavia-Genesee County Airport.

The pilot had been flying for 30 years, including flying for a Police Department, and most recently had flown for Mercy Flight for 5 years.  He had flown 3583 hours in total, 621 on type and 1049 at night.  He held an Instrument Rating.  His instrument experience consisted of 11 hours actual and 49 simulated.  He was working his usual 20:00-0800 shift and woken at 17:00 after a “good night’s rest”.

All three sectors were conducted using a Night Vision Imaging System (NVIS) and Night Vision Goggles (NVGs) in what were stated to be Visual Flight Rules (VFR) conditions.  The pilot had checked the weather before the first sector but did not recheck at Strong Memorial Hospital “because it was clear”.  The automated data at 20:50 for their destination was cloud at 1400 ft and 10 mile visibility, 10ºC air temperate and a dew point at 9ºC .

As the helicopter neared the airport several occupants noticed “patches of fog” which they discussed over the intercom according to an interview with the pilot.  Curiously the brief narrative in the accident report form appears to contradict that by stating that no one onboard saw “the isolated fog bank” (although could relate to a specific patch of fog).

Once the airport was in sight the pilot terminated the radar service and self-vectored for “a practice RNAV-28 LPV approach, under VFR”.  In interview with the FAA the pilot reported that the 4-axis autopilot was coupled and that the “runway and lighting was in sight all the way down the glideslope”. The pilot stated he “did not notice the fog” through the NVGs. The FAA interview states he did not ‘look under’ (i.e. below) the googles and it is surprisingly stated that looking below was “not normal”.  This was not apparently challenged by the FAA interviewers. 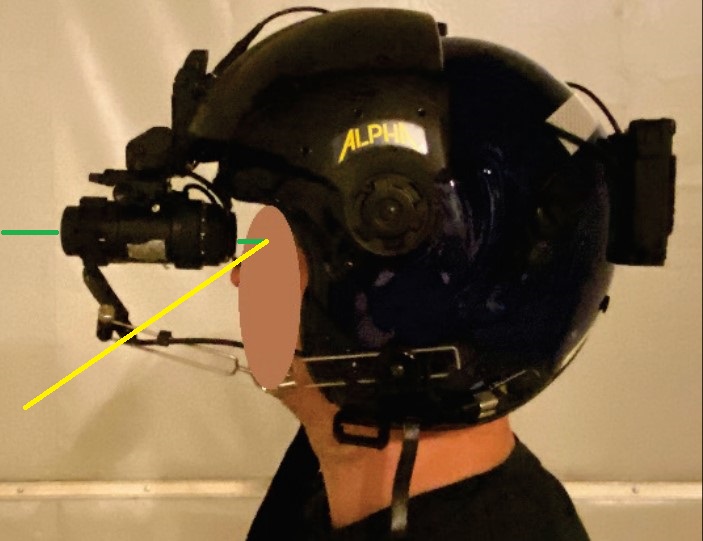 NVGs in the Down Position, Showing Direct Vision (Green) Through the NVGs and Peripheral Vision (Yellow) ‘Below’ the NVGs (Credit: DAIB Annotated by Aerossurance)

An FAA interview summary then states:

At about 200 feet, he inadvertently entered a fog bank and lost visual reference to the runway.

According to comments by the operator on the accident form, the pilot decided to hand-fly the aircraft “because of the close-proximity to the ground”.  However:

He attempted a climbing right turn to exit the fog, but forgot to totally de-couple the autopilot.

He was able to momentarily climb above the fog, but was fighting the autopilot for control, and the aircraft descended back down into the fog bank, while drifting north. During the attempted go-around, he made a radio call announcing the loss of visuals. Helicopter did not seem to be climbing as he pulled in collective.

The terrain was “flat farmland, with a treeline to the west and the airport fence line to the south”.  The trees appear only one rotor diameter away from where the aircraft came to rest. 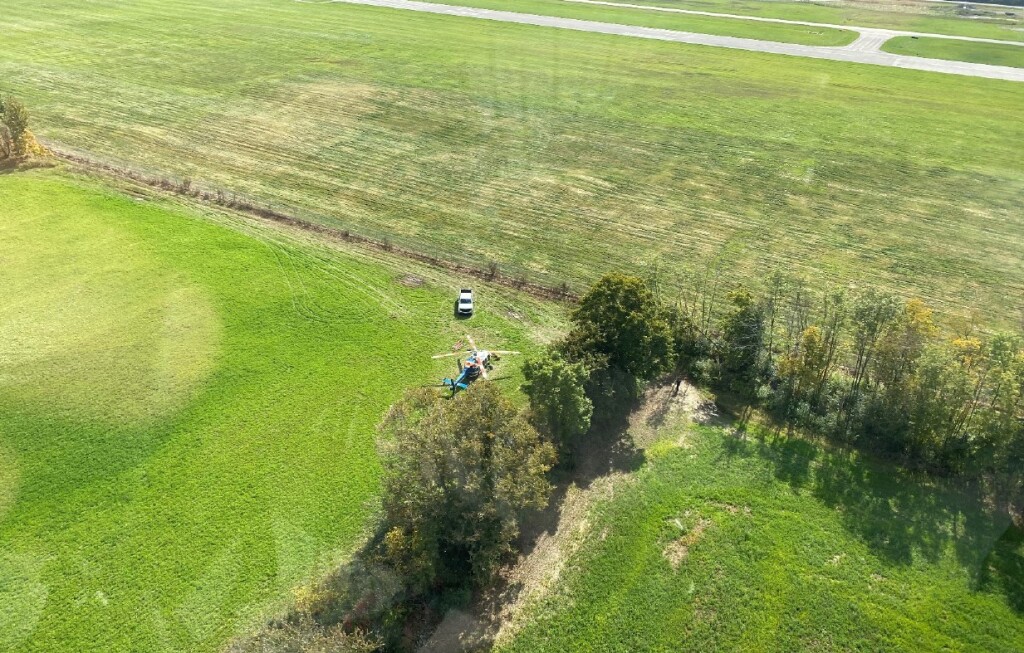 The skids were subsequently found to be spread and the fuselage, tail stinger and nose wire cutter had contacted the ground.  There was fuselage damaging and cracking evident. 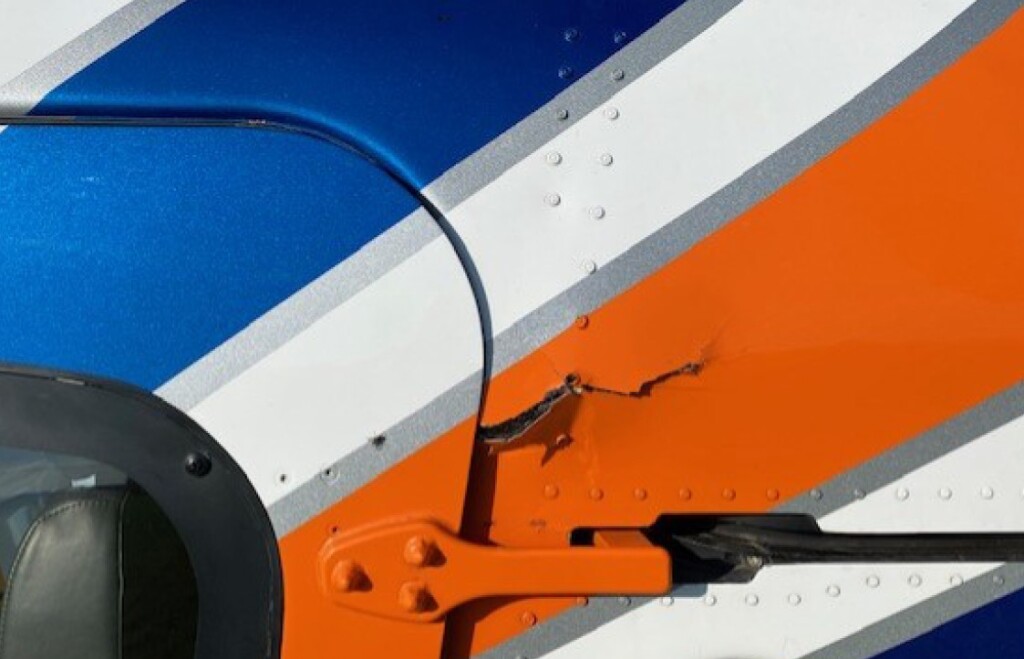 The operator, in the recommendation section of the report form, sensibly suggest that the “go-around feature of the autopilot could have been utilized” and ATT (Attitude Retention) mode was also an option.

We will update this article as the NTSB safety investigation progresses.

There are some similarities with a November 2020 accident to EC135P3 (H145) LN-OOZ in Denmark that we reported on in September 2021: A HEMS Helicopter Had a Lucky Escape During a NVIS Approach to its Home Base (our 10th most popular article of 2021).

The comprehensive 60-page Danish Accident Investigation Board (DAIB) safety investigation report was published in just 8 months.  We look forward to seeing if the NTSB do a similarly thorough investigation.

There are however troublingly pejorative ‘old-view’ statements in the record of the FAA interview conducted with the pilot two days after the accident, that state the pilot:

…showed a cooperative and compliant attitude during this investigation. He recognized and admitted to his mistakes.

Cooperation is of course good.  Having a ‘compliant attitude’ however perhaps implies complying with directions of the interviewer and might therefore indicate the interview lead the interviewee’s evidence.  A statement relating to admission of mistakes might indicate what the interviewers were looking for was for the interviewee to accept individual blame rather than understand the circumstances of the accident and any systemic issues, such as related to training.  The interviewers appear to be from the local FAA Flight Standards District Office that approved the air operator.

Whereas the DAIB prepared a 60 page assessment of the EC135 accident in 8 months, in this case the NTSB final report was a mere 6 pages (mostly tabulated data and just 129 words of written text), issued after 19 months.  Their probable cause was a simplistic:

The pilot’s failure to disengage the autopilot prior to climbing out of a fog bank. 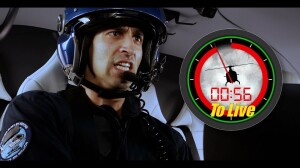